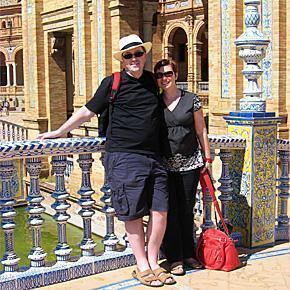 They say, as you get older, time seems to pass more quickly. At the rate 2012 flew by, I must be about 85 years-old. This was another big year for us and although we didn’t stray beyond the borders of Europe, we did a lot of travelling to new destinations and crossed a few items off our personal bucket lists.

Here’s a recap of how we spent our year, with links to some of our favourite posts.

A cosy January weekend in Eupen

In January, we explored a region of Belgium that was new to us – the Eastern Cantons. We spent a wonderful weekend exploring German-speaking Eupen and the towns of Homburg and Aubel.

February saw the start of a great new food relationship in Brussels, when we first discovered the incredible brunches at La Britannique.  We also found Brussels best hamburger at Cool Bun. Oh those onion rings…  It also saw us planting the seed of a brand new business relationship with our good friend Jon, creator of our wonderful Living Abroad video series.

February also brought us our first international travel of the year with a return trip to Athens, Greece. I know Athens isn’t everybody’s cup of tea, but since we visited in the off season, we actually loved it, especially exploring the incredible central market and watching the changing of the Evzone guards.

Marvellous March – We fell in love with Dubrovnik and were impressed by our day-trip to Bosnia.

In March, we visited our first new countries of the year, Croatia and Bosnia Herzegovina. We began our adventure in Dubrovnik, where we explored the old city walls and photographed the city at night. Then we spent an incredible day with Zoran, who took us to Počitelj in Bosnia followed by an afternoon in Mostar.

Closer to home, we also spent a night in Ghent where we had the opportunity to Dine with Belgians with Comme Chez Moi and visit the lovely STAM museum.

April was a fantastic month, with the third visit of my parents. We eagerly whisked them around Europe on a whirlwind adventure.

We fell in love with Lovely Lisbon!

We began in Lisbon, Portugal, another new country for us, where we visited two towers in Belem, as well as the UNESCO listed Jerónimos Monastery. We hiked up to the Castle of São Jorge, passing by many brightly coloured Azulejos tiles on the way.

We were blown away by the palaces of Sintra

Our first taste of Andalusia and weirdly wonderful Gibraltar

Then we were off to Andalusia, Spain, where we explored the beautiful pueblos blancos. We spent a night near the canyon and bullring of Ronda, before spending a day in weird and wonderful Gibraltar.

Malaga and Granada in all their Moorish splendour

Continuing on, we found ourselves in Malaga, where we discovered our first Moorish Palace, Gibralfaro Castle and the Alcazaba of Malaga.

Our next stop was Granada, where we wandered the palaces and gardens of the magnificent Alhambra. Then we were off to our favourite city in Andalusia, Cordoba, where we spent a morning in the stunning Cathedral Mosque, the Mezquita.

Seville and Cordoba – colourful and flamboyant

Finally, we found ourselves in Seville, where we visited one final palace and climbed up one last cathedral spire. We wandered through some incredible gardens and took in some Flamenco dancing, before heading back to Brussels.

Prague and England to round out the adventure

Any sane person would have stopped there; but not us. We continued on to Prague, in yet another new country for us, the Czech Republic. Finally, we made a killer trip to London and finished up in Cornwall and Devon. Phew.

How do you end such an amazing month? With a ride on the Brussels Tram experience of course!

We were sad to see my parents go, but we could sure use some sleep afterwards!

But, as they say, no rest for the wicked. We must be pretty wicked, as we never seem to get much rest.

In May we spent a lovely weekend exploring Liege for our CheeseWeb Escapes Newsletter. May also saw the opening of one of our very favourite restaurants in Brussels, Britxos.

We also spent an incredible day exploring the Floriade World Horticultural Expo in Venlo, the Netherlands.

In June we were busy exploring more hidden corners of our beloved Belgium. We began with a visit to the Chateau de Beloeil in Hainaut. While there, we accidentally discovered the best zoo in Belgium, Pairi Daiza. We also visited the home of our favourite Belgian Bubbles at Domaine des Agaises.

We began a fun relationship with Visit Flanders and the Flanders is a Festival crew. Our first event was the Afro-Latino festival in Bree, where we got up close and personal with Shaggy.

A busy month in Belgium

At the end of the month, we dug out or hiking boots and headed back to Eupen to explore the stunning Hautes Fagnes Nature Reserve.

We ended June with a bang, by hanging suspended over the city with Dinner in the Sky – a once in a lifetime experience we will never forget.

July was another huge travel month and a great time for me personally, as one of my dearest friends from home came to visit me in Belgium, for the first time. How do you celebrate such a landmark event? With trips to four incredible European cities of course! (As I’m still busily editing photos and writing posts about this adventure, you’ll hear plenty more about it in the new year.)

We started with a girly trip to Paris where we hit up all the usual tourist spots, and a few unusual ones.

Then we grabbed Andrew and jetted off to Copenhagen, and visited yet another new country with Denmark. We explored the canals by boat, the streets by foot, visited a palace and said a quick hello to the little mermaid. Then we said goodbye to Andrew and set off for Berlin.

Berlin’s rainy weather was determined to get us down, but we were determined not to let it. Despite being soggy most of the time, we museum-ed, ate, drank and were merry, in our lovely rental flat.

July – A whirlwind month around Europe

From Germany, we flew to my second new country of the month, Hungary, where we had many highs and a few lows in Budapest. We had a great day exploring the Danube Bend, even if it was hot enough to melt the sunglasses right off our faces.

We had an even better day recovering from all of our travels in Budapest’s famous Gellert Spa and Baths. Heaven.

Don’t feel too bad for Andrew. While I was off gallivanting about Europe, he was riding the rails here in Belgium. We also discovered a fantastic spa, much closer than Budapest when, with the help of a reader recommendation, we visited Carolus Thermen Spa in Aachen, Germany.

Normally we head home to Canada in August, but as we’re with our families for the holidays, we were able to enjoy August in Belgium. Our neighbourhood gets super quiet in the summer, once the eurocrats take off on their holidays. But I still can’t say August was a quiet month at CheeseWeb HQ.

We found ourselves back in Ghent, for more research. We discovered some hidden parts of the city by following the TRACK art exhibition and checked out three of the city’s best art museums.

We were also thrilled when our friends Warren and Betsy from Married With Luggage stopped by and felt the occasion called for a road-trip. We packed a picnic and headed south. Our first stop was the Castle of Freÿr, one of Belgium’s most famous castles. Then we were off to Dinant, where we found some unexpected inhabitants.

Another month of Belgian goodness

Warren encouraged us to get up early so we could photograph the 2012 Flower Carpet in Grand Place with no crowds. What a good call! We even explored a corner of Brussels that was new to us when we stepped behind the scaffolding at the Palace of Justice.

Andrew and I had another evening of music at the Antilliaanse Feesten, in Hoogstraten. We were shocked to learn the World’s largest Caribbean festival is held in a Belgian field. Who knew?

In the autumn things began to calm down for us on the travel front, mostly because we both had a ton of work to catch up on and we had blown our yearly travel budget by miles.

We had one last festival to visit and it was quite different from the others. At the Laus Polyphoniea Classical Music Festival, we discovered the stunning AMUZ Concert Hall, in Antwerp. We definitely want to return to this unique venue.

Fast cars, great food and a touch of culture

Andrew got to fulfil two lifelong wishes. First, he got to peek inside the brewery of one of his favourite beers, when we visited Chimay. Then, I won the Most Wonderful Wife in the World award, by gifting him with a drive in his dream car. Andrew got to race around the track at Mettet, Belgium in an Aston Martin v8 Vantage.

Things weren’t so bad for me either, as I was able to spend a few days working my dream job, by photographing the new menu of Britxos. Yum!

With all of this cavorting around Europe, I’m sure you think neither of us works at all, but I promise you MOST of our days are spent banging away on our computers. And if Andrew working full-time, plus getting his MBA and me writing CheeseWeb, and working away at my photography business aren’t enough, we’ve been working on a new business idea, launching next year. No wonder we have no idea where October went!

If that all wasn’t enough paperwork to deal with, we also had an aborted attempt at applying for Belgian Nationality.

November was also a blur of work, work and more work.

At least one exciting thing happened in the fall – the opening of the best fish and chip shop in Brussels, Bia Mara.

And finally December. We were super excited to spend the first holiday season with our families since we arrived in Belgium. So off we flew to Saint John for my first Christmas with my family in 8 years and right now we are hanging out in Florida spending New Year’s with Andrew’s parents and sister.

Life has treated us incredibly well in 2012 and we are thankful every day for the experiences we’ve had and the ability to share them all with you. We hope we can continue to inspire you to discover Belgium and the rest of the world in 2013!

We wish you a fantastic New Year, filled with happiness, love and exploration!

Alison Cornford-Matheson
Alison Cornford-Matheson is a Canadian travel writer, author, and photographer. She is the founder of Cheeseweb.eu, a website dedicated to slow and sustainable travel, off-the-beaten-path destinations, and cultural awareness through travel. She and her husband, Andrew, are the founders of RockFort Media, committed to helping entrepreneurs tell their stories online. Alison has visited over 45 countries and, after living in Belgium for 11 years, now lives full-time in a Bigfoot motorhome named Yeti with Andrew and their well-travelled cat.
Latest posts by Alison Cornford-Matheson (see all)
Pin
Share8
Tweet
Flip
Email