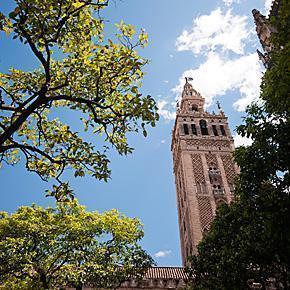 This entry is part 18 of 23 in the series Portugal & Andalusia 2012.
THIS POST MAY CONTAIN COMPENSATED LINKS. FIND MORE INFO IN MY DISCLAIMER.

We’re suckers for a great view and, in Seville, Spain, the best one was from the top of the Giralda, at the Cathedral of Seville.

When Andrew and I travel, there are always stairs to climb. We’ve climbed thousands over the years. Our road-trip in Portugal and Andalusia was no exception.

We tramped to the roof of the Monument to the Discoveries in Lisbon; Hiked up to the Pena National Palace in Sintra; trudged our way to the top of the Alcazaba in Malaga and clambered up the walls of the Alhambra in Granada – all to find the perfect view, and simply to say we had done it.

There was one last view on our checklist and to see it, we had to climb the 95.5m Giralda, the bell tower of the Seville Cathedral. There was one big difference, this time – No stairs! 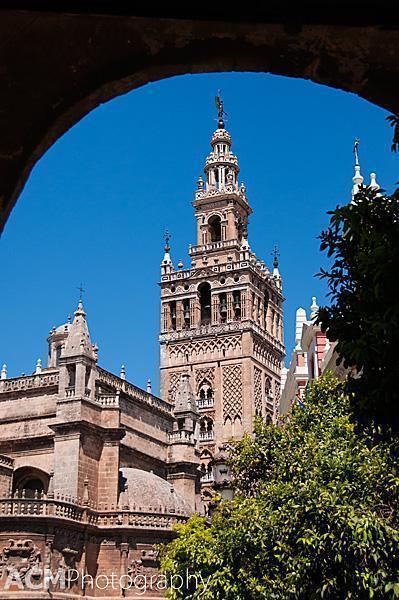 The beautiful Moorish Giralda bell tower contrasts the Gothic architecture of the Cathedral of Seville.

The Giralda sits in striking contrast to the enormous gothic Cathedral of Seville, the largest gothic building in Europe. The bell tower is one of three remaining Almohad minarets in the world (the other two are in Morocco) and is a highlight of Moorish architecture in Andalusia.

It has survived wars, earthquakes and other disasters with minimal damage. Several additions were made over the years, but for the most part, it remains much as it did in the late 12th century. One of these early features is how we made it to the top, without climbing stairs.

The Giralda was originally constructed with a series of ramps, wide enough for two guards on horseback. They are gently inclined and although it’s still a workout, it’s nothing like climbing 35 flights of stairs. 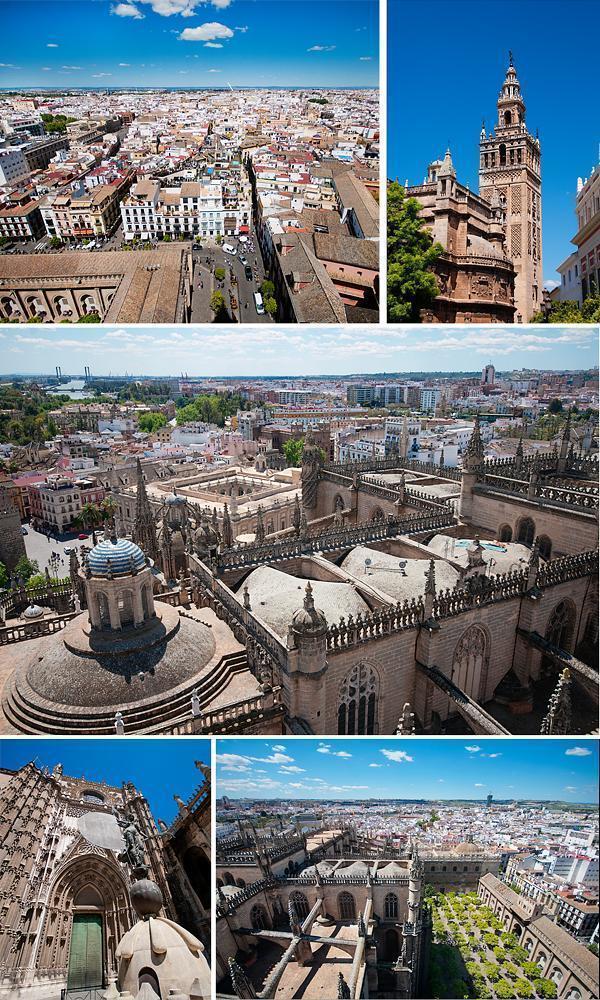 What a view! Seville and the Cathedral seen from the Giralda

From the top, you are treated to a view of Seville and the surrounding countryside. It’s also a great way to get a sense of the sheer size of the Seville Cathedral. From above it seems massive and, from this vantage point, you can see the flying buttresses that typify this style of gothic architecture. You can also see the roof domes and the shady orangery far below. 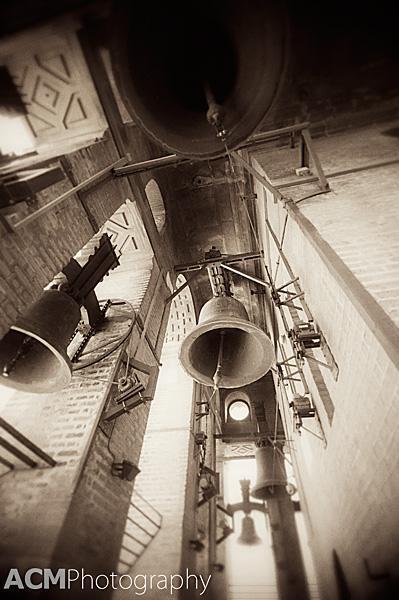 It is a bell tower after all.

But aside from giving tourists lovely views, the Giralda still serves its original purpose, by housing the giant cathedral bells.

Seville Cathedral is, of course, well worth exploring too. Designated a UNESCO World Heritage Site, it’s the third largest church in the world.

Inside the Gothic Cathedral of Seville

The huge vaulted ceilings are supported by pillars, larger than redwoods. Every corner and crevice is decorated by gothic ornamentation and it’s all illuminated by the colourful stained glass windows. 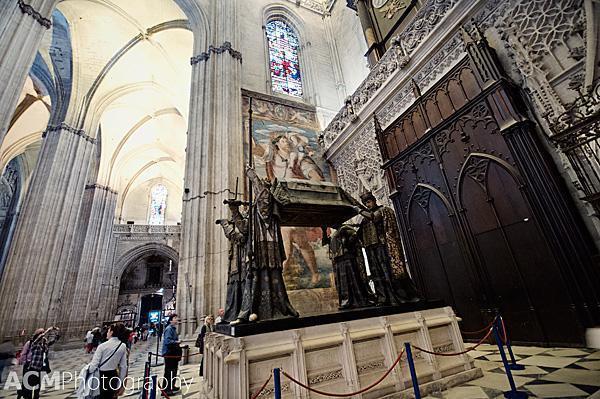 The Cathedral holds many treasures, relics and famous remains. The most renowned of all of these is the tomb of explorer Christopher Columbus. 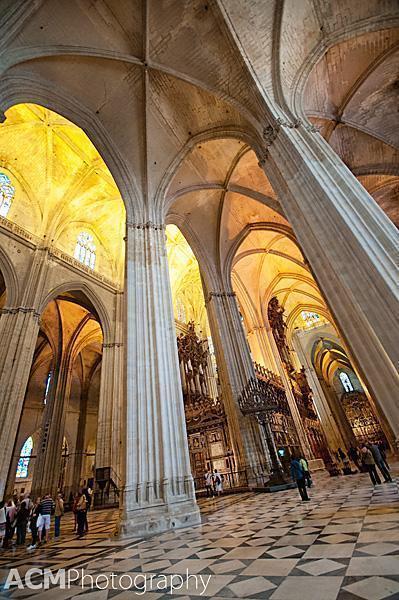 Cool, calm, Seville Cathedral with its dramatic pillars and arches

It’s a cool, dark sanctuary from the heat, colour and noise of bustling Seville outside the cathedral walls.

As the final cathedral on our tour of Andalusia, we certainly saved a good one for last and best of all, no stairs.