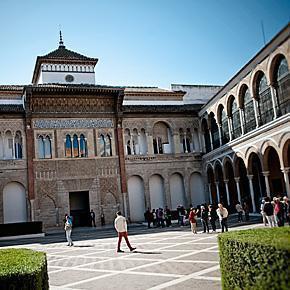 Visiting the Alcázar of Seville, Spain

This entry is part 17 of 23 in the series Portugal & Andalusia 2012.
THIS POST MAY CONTAIN COMPENSATED LINKS. FIND MORE INFO IN MY DISCLAIMER.

The final Moorish palace of our travels in Andalusia was the Real Alcázar of Seville. Just when we thought we were ‘palaced out’, we realised we saved a great one for last.

By the time we reached the last city on our road-trip through Andalusia, Spain, we had jokingly dubbed it ‘the Palace and Cathedral tour.’ Seville had fine examples of each, so we rounded out our Moorish Palace tour with a visit to the Alcázar of Seville (Reales Alcázares de Sevilla, in Spanish).

The word Alcázar comes from an Arabic word that refers to a type of Moorish castle or fortress existing in Spain and Portugal.  The Alcázar of Seville is one of the best-preserved examples and is a UNESCO World Heritage Site.

The original palace, called Al-Muwarak, was built by the Almohades in the 12th century. The Almohad dynasty was made up of Berber-Muslims from Morocco. As with the other Moorish palaces we visited in Spain, the Alcázar of Seville has been added to and adapted, by each successive ruler who resided there.

As we passed through the Alcázar’s entryway, I wondered if I was becoming blasé about the architecture of Andalusia. How many elaborately mosaic-ed walls and gilt ceilings can one person admire in two weeks? It turns out, at least one more. The Real Alcázar is stunning.

Like many of the palaces we visited, one of the picture postcard views is the courtyard. At the Alcázar of Seville, this is the Patio de las Doncellas or The Courtyard of the Maidens. The name refers to a myth, propagated by the Christian re-conquest movement, that the Moors demanded a tribute of 100 virgins from the Christians, every year. 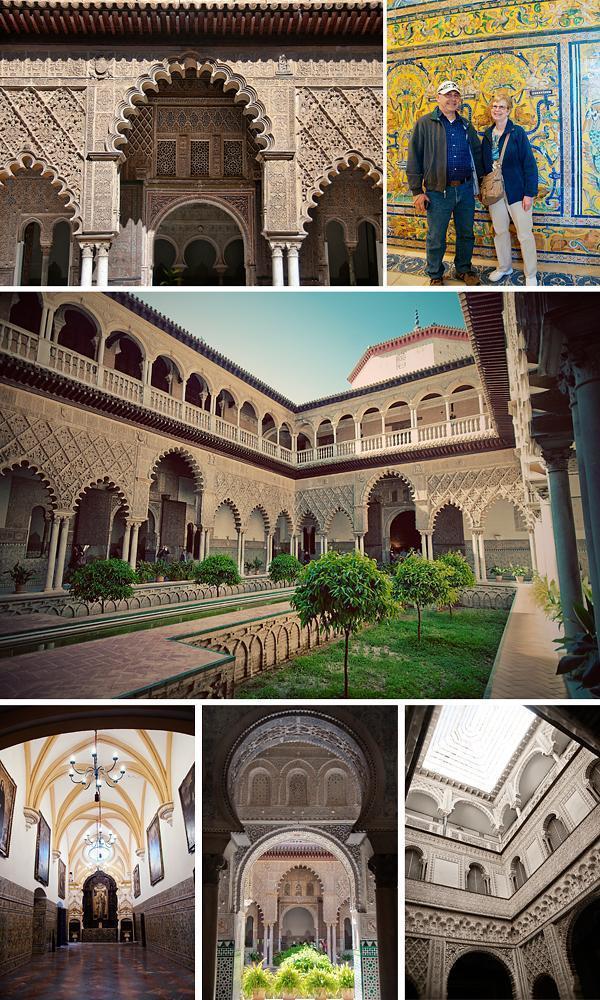 [Main and Top Left] The Courtyard of the Maidens, [Top right and bottom left] – The gothic palace [bottom centre and right] Hall of the Ambassadors

Despite the degrading context of the name, the Courtyard of the Maidens is beautiful. Ornate arches and shady corridors surround a long reflecting pool. You can easily imagine Kings and Queens strolling by the pool and contemplating the fate of their kingdoms… or maybe just what to have for lunch.

The other showstopper of the Alcázar of Seville is the Salón de Embajadores, or Hall of Ambassadors. This confection of dripping carvings and brightly painted archways is topped off by one of the most dramatic domed ceilings we have seen yet.

The impossibly ornate Hall of Ambassadors

Inside the Palacio gótico, the gothic palace built for Alfonso the Wise, the architecture lost its Moorish flavour. It still had its own sense of drama, however, particularly the floor to ceiling tile mosaics, the likes of which we hadn’t seen since the Azulejos of Portugal.

Wandering through the Real Alcazar, Seville

It probably won’t come as much of a surprise; my favourite part of the Real Alcázar was the immense garden. Stepping out of the palace, we found ourselves in front of the Estanque de Mercurio, a large pool and fountain decorated by frescoes and stonework. 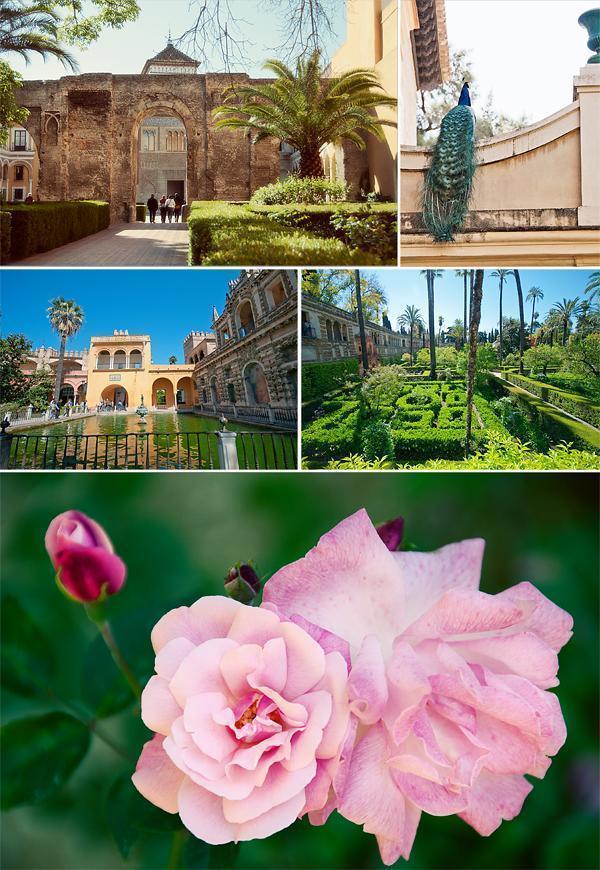 The gardens and grounds of the Alcazar

From there we headed down the stairs and into the main garden, formally laid out with hedges, palm trees, fountains and statuary. Scattered throughout the lush green garden were flashes of colour provided by flowers and free-roaming peacocks. It was easy to find a shady and quiet corner; the perfect place to relax with a good book. If only we lived in Seville. 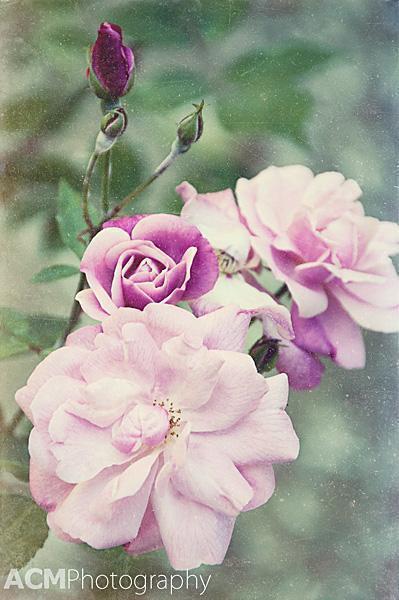 I could explore the gardens of the Alcazar of Seville with my camera for days.

While not as large and sprawling as some of the palaces we had visited on our adventure, the Alcázar of Seville was definitely worth visiting and a lovely last look at the Moorish castles of Andalusia.

What’s the best palace you’ve visited on your travels? Tell us about it in the comments below.