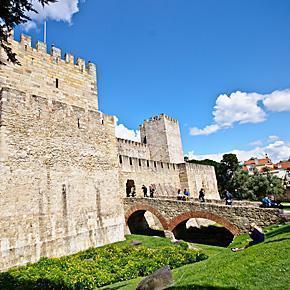 This entry is part 5 of 23 in the series Portugal & Andalusia 2012.
THIS POST MAY CONTAIN COMPENSATED LINKS. FIND MORE INFO IN MY DISCLAIMER.

Entering the Castle of São Jorge, in Lisbon, Portugal

We love to explore castles and on our recent tour of Portugal and Andalusia, we saw European castles of all shapes and sizes. Our first castle visit of the trip was the Moorish  Castle of São Jorge, in Lisbon.

The Castle of São Jorge, or Castelo de São Jorge in Portuguese, has a commanding position atop one of the many hills of Lisbon. Its walls can be seen from various points in the lower town, or Baixa.

The Castle of São Jorge towers over the Baixa of Lisbon

The castle, as it appears today, originates primarily from Medieval times, but remains of the first fortifications on this hilltop date from the 2nd century BC. The hill has been home to Celts, Phoenicians, Greeks, and Carthaginians, followed by Roman, Suebic, Visigothic, and Moorish settlers; each tribe leaving their own stamp on the castle.

São Jorge was finally won by King Afonso Henriques, from the Moors, during the Second Crusade. The castle became Lisbon’s primary defense against further Moorish invasion. In 1255, it also became the royal palace, known as the Alcáçova. Celebrated explorer Vasco da Gama was given a reception here, in 1498, after his return from discovering the route to India.

In the 16th century, a new castle was built on the Tagus River and São Jorge became neglected. It was further damaged in the 1531 earthquake and again during the great earthquake of 1755.

Finally, in 1940, after stints as a prison, archive and a charitable institution for poor children, the Castle of São Jorge underwent extensive renovation and restoration and became the tourist attraction it is today.

The Moorish towers of the Castle of São Jorge

One of the highlights of a visit to the Castle of São Jorge is the stunning view of Lisbon. From the walls, you can see the Tagus River, the ruins of the Carmo Convent, the Santa Justa Lift, and the Christ the King statue on the opposite side of the river.

Cristo-Rei – The Christ the King statue, is visible from the castle walls

Views of Lisbon from the castle walls

Walking along the narrow walls, you can almost imagine the settlers through the ages, looking out over their beautiful kingdom.

Andrew surveys his kingdom from the castle walls

Strolling the walls on a sunny day

The castle is also home to a number of friendly stray cats and a flock of well fed peafowl who lurk around the castle’s cafe.

A visit takes a few hours and costs 7.50€ for adults and 4.00€ for students and seniors. Children under 10 years get in for free.

One of the best ways to reach the castle is by one of Lisbon’s iconic trams, although if you don’t go early, the lines to board are long and the trams are packed. You can also choose to walk up the hill as we did (justifying a  Portuguese wine tasting at lunch) and admire the beautiful azulejos, or tiles, along the way.

Stay tuned for one last post from Lisbon, and many more from our Portugal and Andalusia adventure.

Alison Cornford-Matheson
Alison Cornford-Matheson is a Canadian travel writer, author, and photographer. She is the founder of Cheeseweb.eu, a website dedicated to slow and sustainable travel, off-the-beaten-path destinations, and cultural awareness through travel. She and her husband, Andrew, are the founders of RockFort Media, committed to helping entrepreneurs tell their stories online. Alison has visited over 45 countries and, after living in Belgium for 11 years, now lives full-time in a Bigfoot motorhome named Yeti with Andrew and their well-travelled cat.
Latest posts by Alison Cornford-Matheson (see all)
Pin18
Share8
Tweet8
Flip
Email
Read more from this series...
Series: Portugal & Andalusia 2012