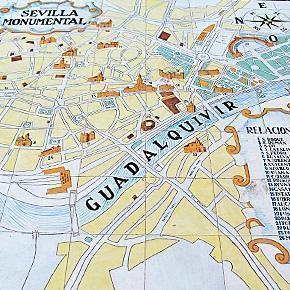 Our 10 Favourite Photos from Seville, Spain

This entry is part 19 of 23 in the series Portugal & Andalusia 2012.
THIS POST MAY CONTAIN COMPENSATED LINKS. FIND MORE INFO IN MY DISCLAIMER.

We share our favourite photos from the beautiful Andalusian city of Seville.

With swirling Flamenco dresses, colourful mosaic tiles, internationally themed architecture and vibrant gardens, Seville, Spain is a photographer’s paradise. Today we share 10 of our favourite photos from this inspiring city.

Seville was the perfect city in which to end our road-trip of Portugal and Andalusia. Here, we visited one final UNESCO site, the Seville Cathedral and a final example of Moorish architecture at the Real Alcázar. Beyond those highlights, we had some other great moments. Here are a few, seen through my camera lens.

This first photo, was actually snapped as we were driving into the city. If you spend any time driving through Spain, particularly in Andalusia, you’re bound to spot a giant black bull silhouette guarding a hillside. This symbol is the Osborne Bull, and until I was researching this post, I didn’t realise he began life as an advertisement.

The Osborne Bull was created by Andalucian artist, Manolo Prieto, from Cadiz. The bull’s purpose was to promote Veteran brandy, a product of the Osborne sherry company, back in 1956. Over the years, he grew and became more sturdy (switching from wood to metal construction). He became such a symbol of Spain, government official worried he was too much of a distraction to motorists and in 1994 ordered his removal.

Spaniards around the country, particularly in Andalusia, rallied to save the Osborne bull, and the regional government declared it part of Andalucian Heritage. We declared him the official symbol of our road-trip too!

The Torre del Oro or ‘Gold Tower’ is one of Seville’s popular landmarks perched beside the Guadalquivir River, which bisects the city. It gets its name from the golden colour it projects onto the river.

The tower was built by Seville’s Moorish rulers, in the 13th century to defend access to the city by water. It served as a prison during the Middle Ages and these days houses the naval museum.

The Arco de la Macarena, or Macarena Gate marks the entrance to the neighbourhood of Seville bearing the same name. The gate is one of only a few remnants remaining of the city walls.

The origin of the name, Macarena is disputed. Some believe the roots are Arbic, while others insist they are Latin. Whatever the case, the neighbourhood lends its name to the sculpture of Our Lady of Hope Macarena, the namesake of many Sevillian women.  And if you are thinking of that 1995 hit dance song, yes it does have roots here. And yes, we may have sang it once or twice on our travels.

Horses wait patiently for passengers behind the Town Hall of Seville

Seville’s Plaza de San Francisco is home to the most ornate façade of the city’s Town Hall, or Ayuntamiento. It’s a busy spot for tourists and locals alike and it’s from this colourful square, many guides begin their city tours. We ventured out early one morning to take in the colourful architecture and visit with the horses, before things got too busy.

Of all of the Andalusian cities we visited, Seville definitely had the most colourful and visually interesting architecture. My favourite was the Adriatica building on the Avenida de la Constitucion. It was originally built for an insurance company of the same name and these days houses offices and a sweet shop on the ground level. Sadly, my dream of owning the wonderful balcony will remain just that. At least until the current occupants move out.

6. The Palace of San Telmo

The Palace of San Telmo is now the seat of the presidency of the Andalusian Autonomous Government.

The Palace of San Telmo is another of Seville’s many striking buildings. It was built in 1682 as a school for the orphaned children of sailors. These days it is home to the presidency of the Andalusian Autonomous Government. Its vibrant red and yellow paint makes it stand out, even in this colourful city. The building is covered with statues representing everything from the nautical arts and sciences, to patron saints and indigenous people of the Americas.

This photo was actually taken just around the corner from the previous one. You can see the tower of the Palace of San Telmo peeking over the fence. Everywhere we turned in Seville we saw brilliant flowers; at the Real Alcazar, in the orangery of the Cathedral, in the various parks and gardens scattered throughout the city; but none were as vibrant as these Bougainvillea hedges.

We enjoyed the shady gardens of the Maria Luisa Park

Seville has an incredibly green centre. It seemed like every time we turned a corner, we found ourselves in yet another park or garden. The people of Seville use these green spaces to good advantage. We spotted old men playing board games on shady benches, gangs of young mothers pushing strollers, kids kicking footballs and distinguished elderly ladies walking arm in arm. One of our favourite parks was Maria Luisa Park (Parque de María Luisa) for its statuary, long tiled benches, ponds and water features.

The pavilion buildings of the Plaza de España (Spain Square) are located at the far end of Maria Luisa Park. They were created for the Ibero-American Exposition, of 1929, and have remained as a symbol of Seville. The main pavilion building, shown in the photo, is decorated with tiled ‘Province Alcoves’ representing each of the Spanish provinces. (You can see a detail of the tiles from the Seville Alcove in the square photo at the top of this post). Movie buffs may recognise this as the City of Theed on the Planet Naboo, in Star Wars Episode I and II.

For me, a highlight of our trip, both personally and photographically, was our evening of Flamenco at El Patio Sevillano. It summed up Seville in a way nothing else did. Music, colour, movement, emotion – Seville was all this and more.

Alison Cornford-Matheson
Alison Cornford-Matheson is a Canadian travel writer, author, and photographer. She is the founder of Cheeseweb.eu, a website dedicated to slow and sustainable travel, off-the-beaten-path destinations, and cultural awareness through travel. She and her husband, Andrew, are the founders of RockFort Media, committed to helping entrepreneurs tell their stories online. Alison has visited over 45 countries and, after living in Belgium for 11 years, now lives full-time in a Bigfoot motorhome named Yeti with Andrew and their well-travelled cat.
Latest posts by Alison Cornford-Matheson (see all)
Pin86
Share24
Tweet
Flip
Email
Read more from this series...
Series: Portugal & Andalusia 2012