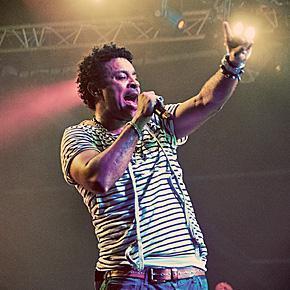 The Afro-Latino Festival in Bree, Belgium

This entry is part 2 of 4 in the series Flanders is a Festival.
THIS POST MAY CONTAIN COMPENSATED LINKS. FIND MORE INFO IN MY DISCLAIMER.

We’re ashamed to admit, we’ve lived in Belgium for seven years, and although we’ve been to countless concerts and a handful of quirky cultural festivals, we hadn’t taken advantage of the hundreds of music festivals that take place here every summer – until last Friday night.

As we mentioned last week, Andrew and I were invited to attend the opening night of the Afro-Latino Festival in Bree, as part of the on-going Flanders is a Festival campaign.

I can hear what you’re thinking; if Flanders, and indeed all of Belgium, is famous for music festivals, why hadn’t we attended any before?

I’ll admit this was entirely my fault and there are a couple of reasons: First, I don’t like crowds. I’m short and when stuck in a crowd of people I get claustrophobic because I can’t see any way out.

Second, I hate the idea of being subjected to the elements – standing in a field in the pouring rain or blistering sun just isn’t my cup of tea.

However, I needn’t have worried. The Afro-Latino festival was neither over-crowded nor unprepared for bad weather. In fact, it was a perfect evening.

The Afro-Latino festival takes place each year in the Bree suburb of Opitter, famous as home to tennis legend Kim Clijsters.

We arrived about a half hour before the gates opened to the public and had the unique opportunity to see the “behind the scenes” set-up of the festival.

We were surprised by how much space there was, cleverly arranged in separate areas around the three different covered stages. Each area had its own drink and food stalls as well as plenty of open space to get away from the crowds and take a break from the music.

(top) The Salsa club and Jahcoustix preforming. (middle and bottom) The Afro-Latino Festival Grounds before the evening crowds arrive.

The food stalls represented every corner of the globe, particularly those with an African or Caribbean flavour. (Of course, Belgian fries remained one of the most popular stalls).

Once the fans started to trickle in the front gates, the music began and the vibe of the festival grounds began to hum with energy. We immediately set off to check out the music on offer.

Neither of us are particularly well versed in world music but we both love music of all kinds. You can find me in the car, rocking out to trashy pop music, cooking along with a salsa beat or working with Goan trance blaring in my headset. Andrew’s musical tastes are similarly eclectic. We were both eager to discover some new acts.

The first performer we enjoyed was Jahcoustix, a German Reggae musician. Germany may not be known for reggae, but Jahcoustix, born Dominik Haas, was a global citizen, having lived in Mexico, Liberia, New York, Kenya and Egypt. We loved his energy and catchy tunes.

Jahcoustix has just released a new single called “World Citizen” featuring Shaggy, who would be the highlight performance of our evening at Afro-Latino.

But before Shaggy, we were introduced to the band Kassav’. Their name comes from an Antillean Creole dish made of cassava root and this Caribbean-French fusion inspires their music.

Kassav’ at the Afro-Latino Festival

Kassav’ has been around since 1979 and is a mainstay of the Caribbean music scene. We were thrilled to discover this lively group and their infectious music.

Finally, it was time for the act we had been anticipating.  We were about to experience a blast from our pasts with Shaggy, who debuted in 1993, during our ‘young and impressionable years.’

We had staked out a prime spot beside the stage and were provided a perfect view as the reggae star turned pop-icon stormed the stage.

We danced, we jumped, we waved our arms in the air and we sang along to songs that took us a long way back in time. Beside the pop classics we remembered, we were also exposed to some more traditional reggae and some new releases we can expect to hear on our radios soon.

Shaggy playing to his fans

Of course, Shaggy drew quite a crowd, but it felt like a much more intimate, party atmosphere than a stadium concert. In fact, the entire Afro-Latino festival felt a lot like a great party rather than the incredibly well organised event it is.

As an introduction to the festivals of Flanders, we couldn’t have chosen better. We’ll be eagerly awaiting the release of next-year’s Afro-Latino line-up, as well as our next music festival in Flanders.

Wrapping up a great night at the Afro-Latino Festival

Have you attended any of the music festivals in Flanders? Share your experiences in the comments below.

A big thank you to Visit Flanders for the opportunity to visit Afro-Latino. For more festival updates, follow #fiaf12 on Twitter.

Alison Cornford-Matheson
Alison Cornford-Matheson is a Canadian travel writer, author, and photographer. She is the founder of Cheeseweb.eu, a website dedicated to slow and sustainable travel, off-the-beaten-path destinations, and cultural awareness through travel. She and her husband, Andrew, are the founders of RockFort Media, committed to helping entrepreneurs tell their stories online. Alison has visited over 45 countries and, after living in Belgium for 11 years, now lives full-time in a Bigfoot motorhome named Yeti with Andrew and their well-travelled cat.
Latest posts by Alison Cornford-Matheson (see all)
Pin6
Share23
Tweet
Flip
Email
Read more from this series...
Series: Flanders is a Festival