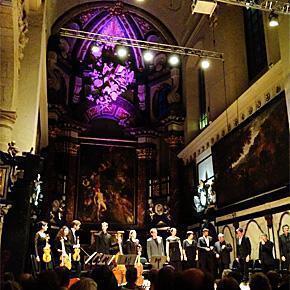 This entry is part 4 of 4 in the series Flanders is a Festival.
THIS POST MAY CONTAIN COMPENSATED LINKS. FIND MORE INFO IN MY DISCLAIMER.

Where better to enjoy a classical music festival than a beautiful former monastery? And, being Belgium, of course the evening begins with a theme dinner to compliment the concert. It’s all part of Laus Polyphoniea in the stunning AMUZ concert hall, in the heart of Antwerp.

I know next to nothing about classical music but, being someone who loves to experience new things, I was curious when the folks at Flanders is a Festival, proposed we visit the Laus Polyphoniea early music festival, in Antwerp. We knew it would be extremely different from the Afro-Latino and Antilliaanse Feesten we had visited earlier in the summer, but we had no idea what to expect. Sometimes, pushing your boundaries and having no expectations is a good thing.

Our first surprise was the AMUZ concert hall building. It’s tucked in among the trendy shops and bars of Kammenstraat and looks unassuming from the outside. Inside the main entrance, we faced a bright, contemporary box-office and hallway. All semblance of a ‘normal’ concert-going experience ended, as soon as we confirmed our reservation and stepped inside the foyer for our theme dinner.

We found ourselves inside a stunning chapel, covered in paintings and rich decoration. The only nod to its current use is a modern bar in front of the altar, a scattering of tables, and a trio of wait-staff to attend to diners. As we took our seat we realised we were not in a typical concert venue.

In fact, the AMUZ concert hall was once an Augustine monastery and the room we were about to dine in was the 19th-century winter chapel. The church building itself dates from the early 1600s and, like many historic buildings in Belgium, has been lovingly repurposed, while maintaining the character of the original design.

The café inside the 19th-century winter chapel at AMUZ, Antwerp, Belgium

The theme of Laus Polyphoniea 2012 was ‘Mare Adriatico’ or Adriatic Sea and the menu before us was Neapolitan cuisine. This menu complimented the concert we were soon to watch and consisted of Rotolo alla ricotta, a pasta dish with ricotta and aubergines, to start, followed by spaghetti alle vongole, for Andrew, and melanzane, a baked aubergine dish with mozzarella and fresh basil, for me.

In fact, in addition to the ‘Festival Menu’ during Laus Polyphoniea, AMUZ hosts four such dinners, during its regular season. Guests dine on cuisine complementing the evening’s program – a lovely way to have ‘dinner and a show.’ If you prefer a day-time experience, AMUZ hosts Sunday brunches, followed by an afternoon concert.

With our meal finished, we headed into the concert hall to find our seats. The setting was even more stunning than the winter chapel.

Although the church was renovated with modern fittings, such as in-floor heat and soundproofing, it maintains its character as a baroque church. It’s a perfect setting for a festival of classical music from the Middle Ages to the Renaissance.

The concert that brought us to AMUZ was called Daedalus and was the final event of Laus Polyphoniea 2012. Arranged by Italian, Amorosi Veleni, it is a combination of pieces by Pomponio Nenna and Carlo Gesualdo. The concert represented a duel between the two composers, who were rivals from opposing noble families. The pieces were performed by an ever-changing composition of strings and vocals.

Even though we didn’t understand the vocals, we were blown away by the power and emotion of the music, not to mention the perfect acoustics of the AMUZ concert hall.

Attending a classical festival like Laus Polyphoniea was not something we would normally do, but we were glad to have pushed our boundaries and discovered not only a beautiful style of music but an incredible venue in Antwerp that we would never have known about otherwise. We will definitely return to AMUZ for more of their brunch and dinner concerts as well as Laus Polyphoniea 2013, with the theme of Elisabeth I.

Always happy to have experienced something new and different in Belgium!

If you enjoy classical music, be sure to check out AMZU’s autumn concert schedule. If you’ve never experienced a live classical concert, this is certainly the perfect venue to discover something new.

HUGE thanks to the kind people of  Tourism Flanders  for sending us to 3 unique and special festivals in Flanders this summer and allowing us the freedom to share our experiences as they happened.

Alison Cornford-Matheson
Alison Cornford-Matheson is a Canadian travel writer, author, and photographer. She is the founder of Cheeseweb.eu, a website dedicated to slow and sustainable travel, off-the-beaten-path destinations, and cultural awareness through travel. She and her husband, Andrew, are the founders of RockFort Media, committed to helping entrepreneurs tell their stories online. Alison has visited over 45 countries and, after living in Belgium for 11 years, now lives full-time in a Bigfoot motorhome named Yeti with Andrew and their well-travelled cat.
Latest posts by Alison Cornford-Matheson (see all)
Pin9
Share18
Tweet13
Flip
Email
Read more from this series...
Series: Flanders is a Festival