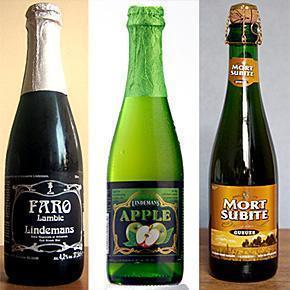 Lambic Beer – Belgium in a Glass

This entry is part 5 of 16 in the series Belgium in a Glass.
THIS POST MAY CONTAIN COMPENSATED LINKS. FIND MORE INFO IN MY DISCLAIMER.

There’s something special in the air around Brussels. No it isn’t just the delicious smell of waffles or frites! It’s the natural yeast and bacteria used to produce Lambic, one of the most unique types of beer in the world.

With all the pollution in a major city, like Brussels, it‘s hard to imagine the air could also contain something benifical and non-toxic. Anyone who has tried to ride a bike or walk, on a particularly smoggy day, would be forgiven for wondering how even humans can survive.

However, a special area southwest of Brussels, called the Pajottenland, is the exception to the rule. Here, the air contains special yeasts and bacteria, used by brewers, to produce flat, still Lambic beer.

By contrast, the fermentation of Lambic beer happens spontaneously. After the ingredients have been brought together, boiled and filtered, the result, called wort, is cooled in an open, shallow vat that fills an entire room. When the room’s windows are opened to promote air flow, airborne yeasts also enter and settle into the wort, beginning the spontaneous fermentation process.

Researchers have identified the presence of 100 different strains of airborne yeast in this part of Belgium. Although yeast exists in the air elsewhere, the production of Lambic style beer is primarily a Belgian tradition.

A pure Lambic beer is flat, because it spends up to 3 years in a barrel, where any carbon dioxyde seeps through the wood.

When you drinka Lambic, you will immediately notice it is very dry and sour. In fact it will get your mouth watering!

In my opinion, Lambic beer is not for everyone. The sour, dry taste of a pure Lambic will likely turn most people away from the product. The good news is there are other options which use Lambic as a base.

Gueuze – In spontaneous fermentation the conditions will affect the flavour for each batch of beer. Thus, brewers blend several different years and ages of Lambic together, to produce Gueuze.

Unlike Lambic, this beer is sparkling, because it includes very young Lambic whose carbon dioxyde hasn’t yet escaped.

Gueuze is still more sour than a typical ale, but it is sweeter than a pure Lambic. In fact it is a nice beer to pair with seafood and a hot terrace.

Some breweries use fresh fruits, others will use syrups, which create a sweeter flavour. I feel the use of fresh fruit makes for a better result, but it will depend on your own tastes.

Fruit Lambics are still typically sour and dry, but the different flavours open them up to new possibilities. Consider a raspberry or cherry Lambic with dark chocolate desserts like a moelleux au chocolat. Yum!

Faro – Since sour is not to everyone’s taste, brewers also bottle beer with brown sugar added. This gives the beer a bit more of a candy caramel flavour with a sour finish. I’d look to pair this with a stew or some heavy desserts.

To get a better understanding of Lambic, Gueuze and the process, I strongly recommend a visit to the Cantillon Brewery. This is the last remaining brewery within Brussels and an easy walk from the Brussels South (Midi) train station. For 6€ you get an overview of the process, the ability to wander through their brewery  and a sample of their beer.  Visiting Cantillon also feels like stepping into the past because the building and most of their equipment is over 100 years old.

At the Cantillon Brewery in Brussels you can see the spontaneous fermentation process in action.

Once you’ve visited Cantillon and tasted their beer, the following are some others I recommend trying:

The most difficult thing about this type of beer is you need to try a lot to find ones you like. I’ve certainly not tried every possible Gueuze, Kriek, or Faro out there, but I do intend to try!

What is your prefered Lambic, Gueuze, or Fruit beer? Share your recommendations in the comments below.

Andrew
Andrew is our resident tech-geek and is normally found lurking behind the scenes on CheeseWeb doing things with code that Alison finds mysterious. He comes out of hiding occasionally to write about history and technology. He loves castles, driving on narrow, twisty mountain roads and relaxing with a glass of peaty Scotch. Follow Andrew on Google+
Latest posts by Andrew (see all)
Pin175
Share127
Tweet28
Flip
Email
Read more from this series...
Series: Belgium in a Glass