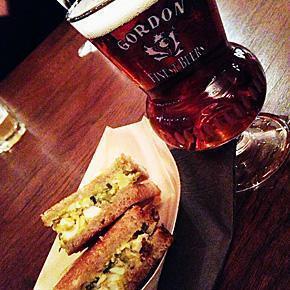 This entry is part 11 of 16 in the series Belgium in a Glass.
THIS POST MAY CONTAIN COMPENSATED LINKS. FIND MORE INFO IN MY DISCLAIMER.

What happens when you combine family brewed beer, gourmet croquet monsieurs, and a group of food bloggers? We didn’t know either. So when we were invited to join Keep on Toasting at Timmermans Brewery last month we jumped at the chance.

Situated just outside the Brussels ring, in Itterbeek, Timmermans brewery has been brewing beer since 1702. They brew Lambic beer and create various blends of gueuze and fruit infusions. Originally called ‘The Mole Brewery’, they claim to be the oldest active Lambic brewery in Belgium, which is quite an achievement.

In the early 20th century, the brewery was renamed, Timmermans. It was purchased by Anthony Martin, a spin-off of John Martin, in 1993. The new owners have maintained a light touch and the brewery continues to be managed by the original family. Today Timmermans’ beers feature as part of the Martin’s Finest Beer Selection.

We visited this brewery through the kind invitation of Jean-Baptiste Nyssen from Keep On Toasting. I love how hard he works to create new experiences, build partnerships with other local companies, and involve the blogging community. He arranged to bring his food truck to the brewery to demonstrate how his gourmet croques pair with beer. And boy was he right! (More on that in a minute.)

Arriving at the brewery, we were invited to taste a few of Timmermans beer. Because they start with a Lambic base, the beer are generally sour and dry. A few of my favourites:

Timmermans also carry a wide range of fruit beer (even a pumpkin beer), but I didn’t have a chance to sample them. I have some in my cellar, so I’ll be sure to let you know what I think.

Stepping back in time at the Timmermans Brewery

Once the entire group had arrived, we watched a short video about the history of John Martin. We were then led on a tour of the brewing facilities, which was like taking a step back through time. The Timmermans brewery is what I feel a brewery should be, old and well worn. There is the old malt hopper, the copper kettles, the belt driven crusher (bought 2nd hand in 1911) sitting next to the old mill (bought in 1815), the huge oak barrels used for aging, and the large shallow vat used for cooling the wort and allowing the natural airborne yeasts to do their job. The place has the look of 300 years of production. Just count the number of cobwebs!

No dusting allowed in a Lambic brewery

Once known as the Mole Brewery, Timmermans is much the same as it was 100 years ago

Timmermans has also allocated part of their facility to showcase the history of beer in Belgium, showing various pieces of equipment, bottles, and old signs from now defunct breweries. The old bottling machines and signs were fascinating glimpses back to the golden days of Belgian brewing. Our tour finished with a visit to a showcase of John Martin’s history.

Side note: Finishing with John Martin may seem a bit odd, but I found John Martin’s story fascinating. John Martin arrived in Antwerp and set up his brewery in 1909. Starting with the distribution and marketing of Schweppes Indian Tonic and Globe lemonades, he built a reputation around beverages: brewing beer, bottling, distributing, and marketing. In 1944, they even convinced Guinness to create a special version of their product specifically for Belgium, Guinness Special Export. Today they also own a chain of hotels, such as the Martin’s Patershof Hotel in Mechelen and Chateau du Lac in Genval.

Jean-Baptiste Nyssen of Keep On Toasting

Arriving back in the bar, we lined up to sample the beer-croque pairings. Jean-Baptiste prepared four different styles of croque to pair with the different beer. My favourite was definitely the Croq’Scottish paired with the Oude Gueuze, although the Croq’Vert with the Faro Lambicus was a close second. Alison is still a big fan of the Croq’Veggie, but I think she was also fond of the Croq’Vert. Nonetheless, as the group ate their food the room went quiet, while everyone savoured the flavours.

At the end of the evening we were all full. It was a great evening and educational too. It is definitely worth visiting both Keep On Toasting and the Timmermans brewery.

You can find Jean-Baptiste and his food truck in various spots around Brussels depending on his schedule. It is always best to look up his location via his website or Twitter (@keepontoasting). If you have an event, he’s also a great option for catering.

If you want to tour the Timmermans Brewery, group tours of 25 or more can be arranged ahead of time. Otherwise, tours are offered on the second Sunday of the month from 2-5pm.

To get to Timmermans, take Metro #5 towards Erasme, get off at Saint-Guidon and catch Bus 116 towards Brussels-Ternat. Ask the driver to stop at Itterbeek Kapel (stop #301340). Then it is a short walk to the brewery. Allow yourself about an hour to make this trip.

If you want to taste Timmermans for yourself, make sure you’re on our mailing list for a special contest for newsletter subscribers coming on March 27th!

What breweries have you visited? Tell us what you thought of their tour in the comments below.

Andrew
Andrew is our resident tech-geek and is normally found lurking behind the scenes on CheeseWeb doing things with code that Alison finds mysterious. He comes out of hiding occasionally to write about history and technology. He loves castles, driving on narrow, twisty mountain roads and relaxing with a glass of peaty Scotch. Follow Andrew on Google+
Latest posts by Andrew (see all)
Pin13
Share83
Tweet19
Flip
Email
Read more from this series...
Series: Belgium in a Glass