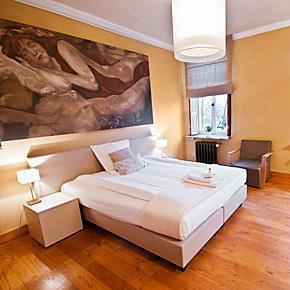 One of the light, airy upstairs bedrooms at Julevi

Although most people think of Belgium as a bi-lingual country with French and Flemish spoken, there is actually a third official language – and no, we don’t mean English.

Like most inhabitants of Belgium, Andrew and I knew very little about the Eastern Cantons; the 11 municipalities that are home to the country’s German-speaking community. Last weekend, we decided it was high time we educated ourselves about this under-promoted corner of Belgium.

Even though the German-speaking community of Belgium makes up a tiny 0.7% of the country’s population, they have their own parliament and government, based in the city of Eupen.

This seemed like a good place to start our exploration of the Eastern Cantons.

Friday evening, after work, we jumped in our car and set our GPS for our first destination in Eupen, the Julévi Bed & Breakfast. Being city-dwellers now, we forgot to account for Friday night commuter traffic, rushing to escape the city, and underestimated our travel time. Despite this miscalculation, it still only took us about an hour and a half to reach Eupen.

Despite our tardy arrival, we were still warmly greeted by the first of our two charming hosts, Michel. He showed us to our room and gave us a tour of the common areas and explained we would have the house to ourselves for the evening as we were the only guests. The Mattens family, who runs Julévi, actually live just up the hill from their B&B and not in the house itself.

And what a house it is. Our room, on the ground floor, was huge. In fact, we had an entire second sitting-room at our disposal, as well as the bedroom itself. Our private bathroom, across the hall, was more compact, but not lacking anything we needed. 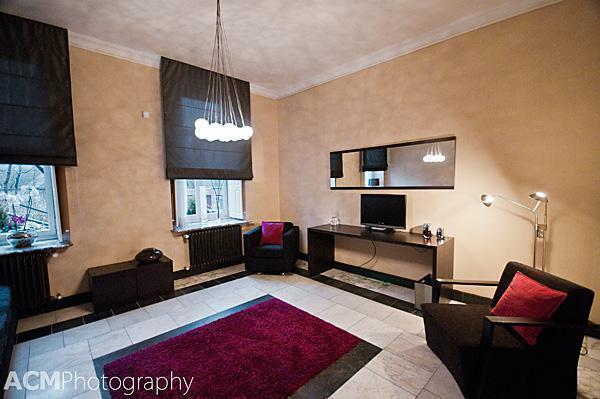 Our room, and indeed the entire house, is tastefully decorated in a modern, contemporary style. The colours are primarily warm earth tones, with the exception of our bedroom, which was done in black, grey and earthy plum colours. (Current room rates are €75-€95). 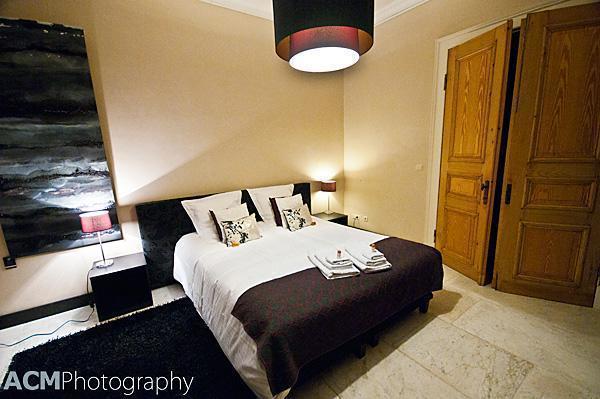 Our very contemporary bedroom at Julevi

The breakfast room and a sitting room, for all patrons of the B&B, are located on the first floor. The cosy atmosphere continued in this large space. But I’ll get to that in the morning. First we needed supper.

[UPDATE: Now Closed] After a low-fat December and January, we were ready for a weekend of Belgian food debauchery and, based on the Trip-advisor reviews, Delcoeur Restaurant and Vinotheque seemed like a good bet.

Delcoeur was only a short walk from Julévi, which was a good thing as Belgium was at its nasty weather best. As we shuffled inside we were warmly greeted in German. When we hesitantly responded in English and French, languages were flawlessly switched and we were offered menus in both languages.

With a nod to my new diet regimen, I opted for a light starter of tuna tartar. (ok, for the diet I really should have skipped the starter altogether but I did it for the blog dear readers, honest!) The tuna was moist and delicious and there was a nice Asian vibe with a bit of citrus and ginger.

Andrew opted for the heavier duck pâté. Judging by the extremely empty plate, when he was finished, I’d say it was a successful dish as well.

I threw diet caution to the wind with my main course and feasted on Iberico pork with chorizo sauce and risotto. It was supremely rich and delicious. 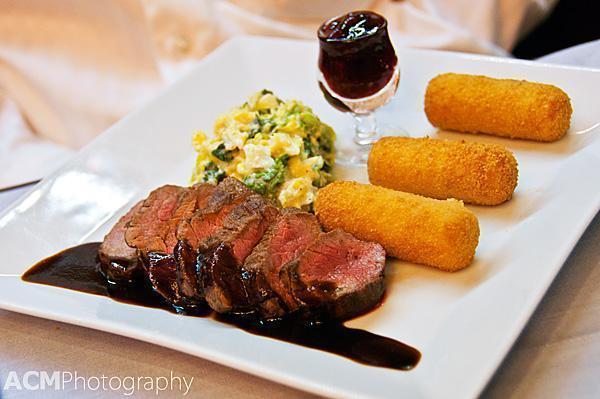 Despite the incredible looking desserts and cheeses, all we could handle to finish was ice cream, and we probably shouldn’t even have attempted that. Even our humble sundaes were perfect. Delcoeur has definitely been added to our list of restaurants worth returning to.

With exceedingly full bellies we returned to our room at Julévi and fell into food comas until morning.

We had opted for a late breakfast, and as we ascended the stairs to the breakfast room, we met the second of our hosts at Julévi, the warm and friendly Birgit. 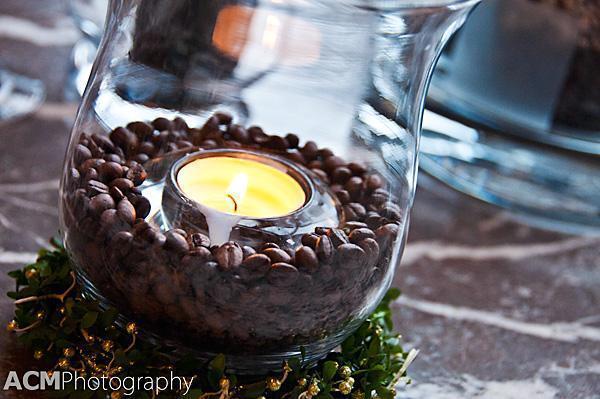 I just loved these coffee bean candles in the breakfast room

Our breakfast was much more than the typical continental fare. We began with fresh rich coffees, fresh orange juice, melon wrapped in smoked ham and fromage blanc with raspberries. Then we were guided to a buffet of cheeses, charcuterie and a big basket of bread and pastries.

Still digesting my supper, I called it quits there. However, breakfast being Andrew’s favourite meal of the day, he took Birgit up on her offer of an omelette. 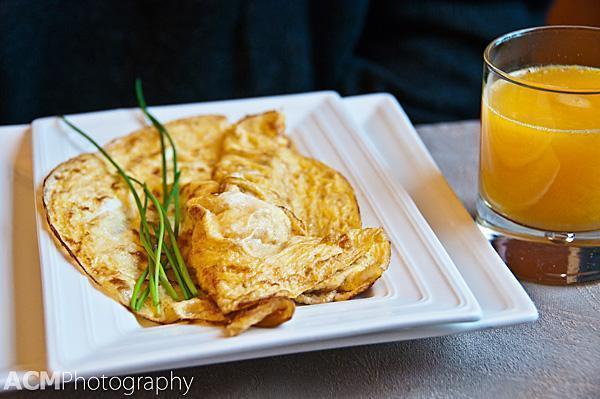 After breakfast we had a long chat with our hostess, who is a wealth of information about the area, having grown up in a nearby village. She was also kind enough to indulge our curiosity about the rest of the building and we had a sneak peek at the other rooms and the beautiful little back garden. I can easily picture basing ourselves here for a week of relaxation and exploration of the Eastern Cantons. 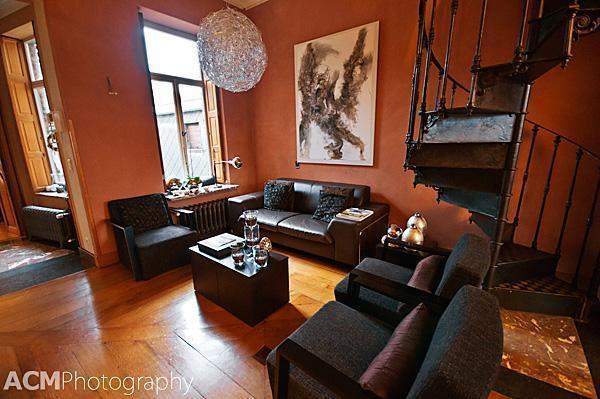 This is the beautiful communal sitting room at Julevi. The stunning spiral staircase leads to the upstairs rooms.

In fact, there’s not a lot for a tourist to do in the winter in Eupen itself. There are a few lovely churches. There is also a modern art gallery that was unfortunately closed the day we visited. There are some nice little shops to explore and the whole area is exceedingly clean and well kept.

Birgit explained the main draw of the area is the nature. Eupen borders the Hautes Fagnes Nature Reserve; the largest park in Belgium. It contains the country’s highest point, the Signal de Botrange, at 694 metres (2,277 ft) above sea level, as well as 10,000-year-old alpine sphagnum bogs.

Although we took a quick trip up the mountain, the rain kept us from getting out of the car and exploring. We are eagerly awaiting warmer weather when we can return and take advantage of the endless network of walking trails.

Thwarted by the weather, we decided to head for our next stop on our Eastern Cantons adventure. Stay tuned for our next post for more about this unique region of Belgium.