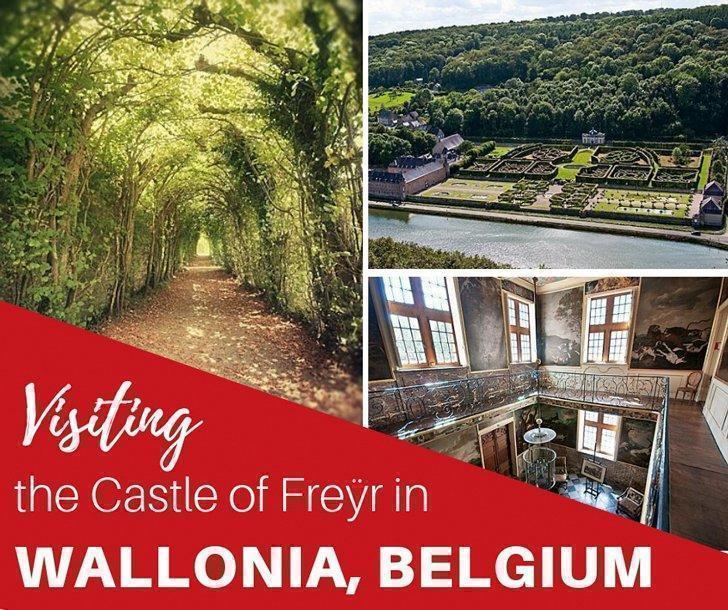 Visiting the Castle of Freÿr in Wallonia, Belgium

With its Renaissance style architecture, formal terraced gardens and fascinating history, the Castle of Freÿr, on the Meuse River, would be at home among the chateaux of France’s Loire Valley. However, you’ll find it right here, in the province of Namur, in Wallonia, Belgium.

We’ve long been saying Belgium’s Meuse River is just as pretty as Germany’s Rhine. And hey, we have more castles per capita than any other country – even France. That’s probably why it took us seven years to visit one of Wallonia’s most famous castles, Freÿr.

Freÿr Castle is an essential part of Belgium’s history and is a Wallonia Major Heritage site (Le Patrimoine majeur de Wallonie). It has remained in the same family for 20 generations, and some family members still live in a section of the castle.

The oldest part of Freÿr was built in 1571, on the site of a keep, dating from the Middle Ages, that had been destroyed in the wars against Emperor Charles V.

In the 17th century, three additional wings were added to the castle, to form a square. Finally, in 1760, one wing was torn down and replaced by a decorative iron gate. This is how Freÿr Castle remains today.

Freÿr has hosted some famous guests, throughout its history. Louis XIV of France, Archduchess Maria-Christina, daughter of Empress Maria Theresa of Austria, and King Stanislas I, all spent time in the castle. Some of these guests were more welcome than others.

Louis XIV, better known as the Sun King, demanded he be allowed to stay at Freÿr while his forces attacked the nearby city of Dinant. It was in the drawing room of the castle, in 1675, the peace treaty was signed. A satirical painting of the Sun King still adorns the wall of this room.

A selection of rooms you can visit in the Freyr Castle

The Treaty of Freÿr, signed between France and Spain, is also known as the Coffee Treaty, as it was the first time coffee was drunk in Belgium.

Inside the castle, in addition to the famous drawing room, visitors can admire several bedrooms, sitting rooms and an imposing dining room. One of the most impressive parts of Freÿr is the frescoed hallway, decorated with hunting scenes.

Paintings adorn the ceilings and walls of the staircase

The most striking feature of Freÿr Castle, however, is not located inside the walls of the chateau. It is the multi-level garden bordering the Meuse River. The terraced garden dates from the late 1700s and contains bubbling fountains, 300-year-old orange trees and 6kms of hedge mazes.

Freyr Castle gardens – (top) the Belvedere, (Middle) The oldest Orangerie in the Benelux, (bottom) View of the pools and Orangerie from the castle window.

A peaceful stroll through the gardens of Freyr Castle

While wandering through the hedges is interesting, the garden is best viewed from above. This is possible from several lookouts on the opposite side of the river. They are tricky to find but well worth the effort.

From this vantage point, you can appreciate the size of Freÿr Castle‘s grounds, and you can see the layout of the hedge-mazes, whose patterns are based on the suits of a card deck.

Freyr Castle’s gardens are best viewed from lookouts across the river.

Freÿr is one of Belgium’s most famous chateaux. But, like all of the castles in this country, it receives a fraction of the visitors of France’s famous chateaux. In fact, the day we visited, there were only a handful of other visitors, despite being in the midst of peak-season.

Visiting the castle and gardens only takes an hour or two and is easily done in combination with other sights in the area. Why not plan a Belgian castle outing with visits to Freÿr Castle, the Chateau de Modave and the Chateau de Beloeil.

We paired our visit to Freÿr Castle with a sightseeing tour of the Meuse River Valley, a lakeside picnic with good friends and a visit to an ostrich farm. Where else on earth would a day-trip like this be possible, only an hour’s drive from a major city like Brussels?

Alison Cornford-Matheson
Alison Cornford-Matheson is a Canadian travel writer, author, and photographer. She is the founder of Cheeseweb.eu, a website dedicated to slow and sustainable travel, off-the-beaten-path destinations, and cultural awareness through travel. She and her husband, Andrew, are the founders of RockFort Media, committed to helping entrepreneurs tell their stories online. Alison has visited over 45 countries and, after living in Belgium for 11 years, now lives full-time in a Bigfoot motorhome named Yeti with Andrew and their well-travelled cat.
Latest posts by Alison Cornford-Matheson (see all)
Pin134
Share536
Tweet15
Flip
Email