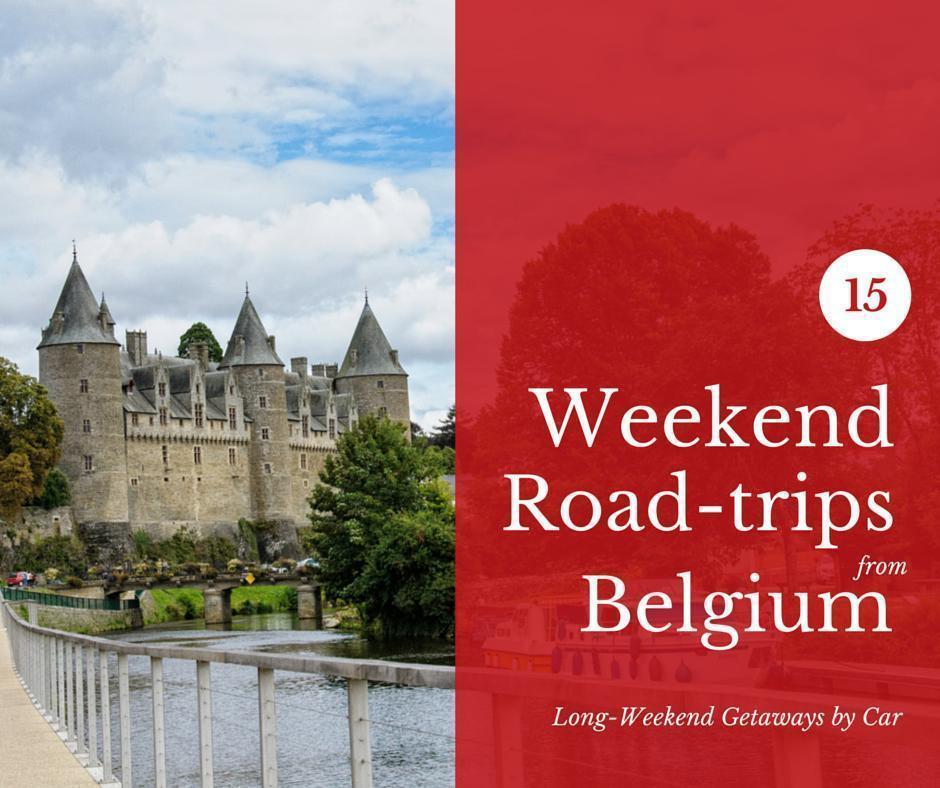 Our 15 Favourite Long-Weekend Getaways from Belgium by Car

This entry is part 1 of 3 in the series Best Trips from Belgium.
THIS POST MAY CONTAIN COMPENSATED LINKS. FIND MORE INFO IN MY DISCLAIMER.

Want holiday inspiration for a long-weekend away? In our 3-part series, we’re sharing our favourite trips from Belgium. First up – our favourite road-trip getaways.

As much as we love exploring Belgium’s nooks and crannies, there’s no denying, one of the best things about little Belgium is how easy it is to travel from it. Take a two-hour drive from Brussels in any direction and you’re in another country (or the sea). There are high-speed train connections to France, Germany, England, and the Netherlands. Then there are the short and often cheap flights taking you to any major destination in Europe.

Frankly, Belgium is a travel junkie’s dream. In fact, often the hardest part is deciding where in Europe to go.

In our ten years in Belgium, we’ve had many fun weekend escapes. Some, we planned for months. Others, we planned the night before. (One was even an accident.) We’ve written about most of them over the years, but we wanted to create one big resource with our favourite weekend getaways. The post became so long, we decided to split it up by means of transportation, so over the next three weeks, we’ll share the series.

The next time you can’t decide what to do on the weekend, we hope you’ll find this list inspirational. First up – the road trip!

We LOVE a good road trip (which is a good thing, considering what’s happening in two months). We will drive much farther for a weekend trip than most normal humans (Avignon and South Tyrol come to mind). However, in this list, I’ve only added destinations sane people would drive in a long weekend. Of course, for most of these destinations, you could also fly or hop on a train, if you prefer.

Don’t miss: the foodie scene including the fantastic farmer’s market or the La Piscine Museum in a nearby suburb.

Don’t miss: The Roman ruins at Bavay and the Abbaye de Vaucelles.

Don’t miss: Spending a day at NAUSICAA and a luxurious stay and meal at the Hotel Chateau Cleary.

The Carnac Alignments in Brittany, France

Don’t miss: The incredible Carnac Alignments standing stones from the Neolithic period and oysters fresh from the bay.

Don’t miss: A stroll through the UNESCO-listed centre and a ‘cheesy’ meal at La Cloche a Fromage.

Coffee by a canal, in Amsterdam, The Netherlands

Don’t miss: The newly restored Rijksmuseum and the best Mexican food in Europe.

Don’t miss: The thatched houses of Giethoorn and exploring the Orchid Garden.

The timeless Cotswolds in England

Don’t miss: Walking the streets of Broadway and admiring the Roman baths in Bath.

The rolling hills (and sheep) of Herefordshire, England.

Don’t miss: Staying at the cosy Holling Grange and feasting on spectacular meals in the restaurant.

Don’t miss: Browsing for used books in a castle in Hay-on-Wye and lunch at one of the many gastro-pubs.

Next week, we’ll share our favourite long-weekend escapes that are a bit further from Belgium, but still easily accessible by plane or train. What’s your favourite road-trip from Belgium? Share it in the comments below.

Alison Cornford-Matheson
Alison Cornford-Matheson is a Canadian travel writer, author, and photographer. She is the founder of Cheeseweb.eu, a website dedicated to slow and sustainable travel, off-the-beaten-path destinations, and cultural awareness through travel. She and her husband, Andrew, are the founders of RockFort Media, committed to helping entrepreneurs tell their stories online. Alison has visited over 45 countries and, after living in Belgium for 11 years, now lives full-time in a Bigfoot motorhome named Yeti with Andrew and their well-travelled cat.
Latest posts by Alison Cornford-Matheson (see all)
Pin432
Share470
Tweet
Flip
Email
Read more from this series...
Series: Best Trips from Belgium