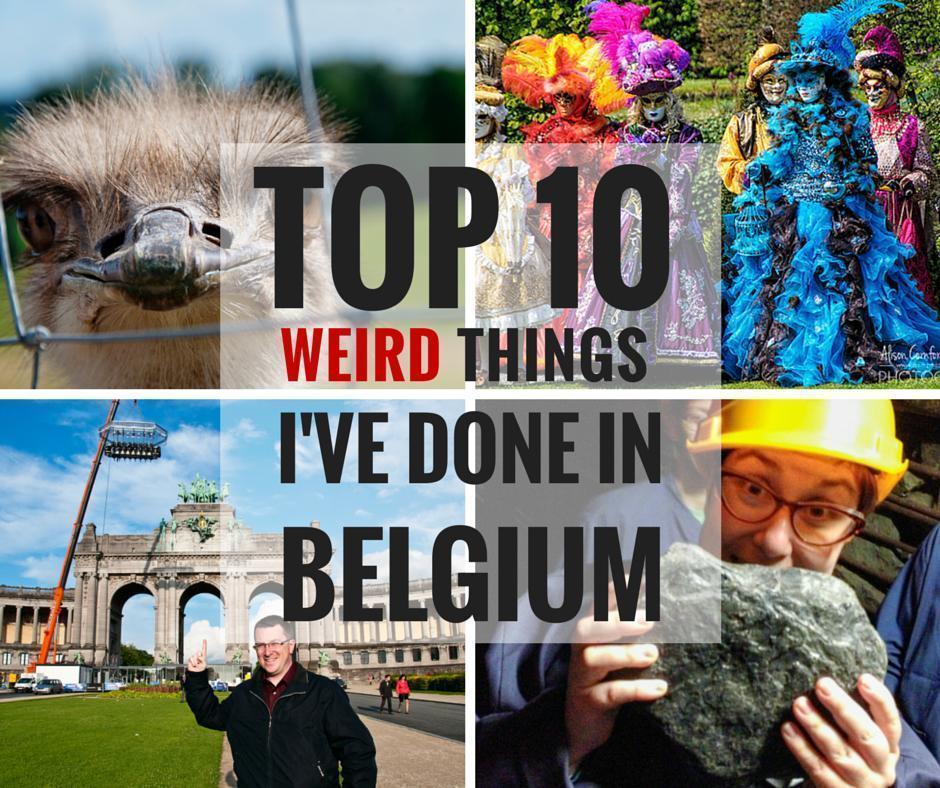 As we’re preparing to take off on our European travel adventure, I’ve been reflecting on our ten years in Belgium a lot lately. We’ve had some unbelievable experiences – some good, some not so good, and a few that were downright weird.

Belgium is the home of surrealism and there’s no doubt we’ve had some surreal experiences over the past ten years, (and we’re not even talking about what happens when we visit the commune!) Today, I want to share my top ten weirdest things I’ve done in Belgium.

10. Wading into the Sea to Photograph Men Fishing Shrimp on Horseback

Photographing the shrimp fishermen on horseback is easily one of my favourite Belgian experiences. (So much so, you’ll find it in our top ten for Belgium guide). UNESCO has even recognised this unique tradition. But that’s not to say it isn’t weird.

The Shrimp Fishermen on Horseback of Oostduinkerk

We gathered with the crowd along the promenade to watch men suit up in raingear and then followed them and their giant horses into the sea. I stood in the frigid water until my feet turned blue, photographing the magical sight. Watching the horses wade back and forth through the surf is an experience unlike any other.

9. Dressing Up as a 70s Film Star to Meet Strangers for Dinner

We talk about Bookalokal often. It’s a great way to meet new people and enjoy great food. Most of the dinners are traditional gatherings, but our first experience with Bookalokal was anything but.

Dressed up like characters from an Austin Powers film, we rang the bell at a stranger’s house. We were greeted by a friendly couple also dressed in 70s garb. Throughout the evening, we met and chatted with our fellow diners, while trying to solve the ‘murder’ mystery. It wasn’t until the very end of the evening we learned people’s real names, occupations, and personalities.

It was great fun, weird, wacky, and my first introduction to my friend Maxine, our hostess. You just know a friendship with such a unique beginning is going to be a good one.

I could probably do a top ten solely based on unique dining experiences we’ve had in Belgium. (In fact, I already did for another blog). Instead, I’ll share my top three.

Our first weird dining experience was eating in a former prison with my parents. Luckily, this ‘prison food’ is delightful Belgian slow food, at Le Mess.

High-class dining on the Tram Experience

Our second weird dinner was also with my parents. (Are we trying to scare them off or what?) This time, it was eating a Michelin Starred meal while circling the city on a tram.

Scary but delicious, Dinner in the Sky

But the weirdest dining experience of all, was watching a Michelin-starred chef prepare my meal and serve it to me himself while I’m dangling, suspended from a crane over Parc Cinquantenaire. (It was all Andrew’s idea!)

We love visiting the passionate people who grow and raise our food and over the years we’ve been to countless farms. Most have been your garden-variety farm (Sorry. It was begging for the pun.) But there are two that stick out.

What are you looking at?

The first was accidently stumbling on an ostrich farm in suburban Dinant. We’ve since been back three times and once we even saw an ostrich lay an egg!

The first snail farm in Belgium

The second was learning about one of the world’s most sustainable food crops –snails and seeing how they are raised from eggs to escargot. Fascinating!

Just like weird dining experiences, I’m sure I could write a whole post on Belgium’s weird and wonderful festivals. Two that always stick out for us we visited way back when we first arrived here – The Cat Parade in Ypres and the Dinant Bathtub Regatta.

Just when we thought we had seen it all in Belgium, we found ourselves in the middle of another surreal festival last year. We arrived at a typical Belgian castle where we found ourselves surrounded by dozens of people in full Venetian Carnival costume. What a feast for the eyes (and camera!)

I love visiting gardens and I am passionate about flower photography. You wouldn’t think that plants would lead to particularly weird experiences. In fact, I was following numerous social media accounts for days, waiting for the arrival of a rare plant at the National Botanical Garden in Meise.

The titan arum is impressive – and smelly

When the plant finally bloomed, I raced over to see it (along with hundreds of other people). The titan arum or Amorphophallus titanium is known for three things: It is one of the largest flowers in the world; It is named after a giant, deformed penis; and it smells like rotten meat.

Photographically, it was one of the best and weirdest experiences I’ve ever had.

4. Meeting the King of the Crossbowmen

Brussels has close to one hundred museums and the most unusual of these is home to one of Belgium’s oldest guilds. Just off Mont des Arts, you can discover the Grand Serment Royal et de Saint-Georges des Arbalétriers de Bruxelles – the crossbow guild of Brussels.

The King of the crossbowmen

During my visit, I not only watched the crossbowmen in action, I also met the crossbow ‘King’ himself. This unassuming looking gentleman has won the country’s most difficult competition, not just once, but three times! I definitely don’t want to get on his bad side!

3. Holding ‘Explosives’ in a Mine

One thing our former home Nova Scotia, Canada and our current home of Belgium have in common is a history of mining. That’s why we were particularly interested in visiting the Belgny Mine in Liege. (It’s also a UNESCO site, so that was an added bonus.)

I’m not cut out for life underground!

Our tour guide was excellent and really gave us a sense of how hard life was for the men who worked underground. He even demonstrated the noise by simulating an explosion. Guess who held the ‘explosives’? (Also, I can rock a hardhat. Watch our video for proof.) Even though we knew it was completely fake, I’d be lying if I said I didn’t have a twinge of fear when my ‘explosives’ detonated.

My night at the Auberge du Sabotier was definitely a weird one. The hotel itself was quaint and comfortable, the restaurant was excellent, and our daytime walk in the woods was lovely. Nothing weird there. In fact, it wasn’t until almost midnight that things got strange. The event is probably best summed up by my text to Andrew. ‘I’m standing in the woods listening to deer try to get lucky.”

Everything seems normal at the Auberge du Sabotier… (maybe they spiked the drinks!)

In fact, deer rutting season is quite a tourist draw. The Auberge du Sabotier even offers ‘Braying Stag’ packages. I have to admit the sound was haunting and the experience was fascinating – but weird nonetheless.

1. Everything About the Binche Carnival

I tried to sum up the weird and wonderfulness of the Carnival of Binche in a pithy title, but it just wouldn’t work. ‘Watching a girl stuff straw in her father’s clothes, at 3 am, while drinking champagne, followed by dancing in the streets, wearing costumes, and trying to avoid citrus-related injuries’ just wasn’t catchy. I’m not sure my 1500 word article even gets to the heart of the unique festival in Wallonia. It’s just something you have to experience for yourself.

Who wants to be ‘normal’ anyway?

There is no place else on earth quite like Belgium. Strange happenings just seem to be par for the course here. But, then again, what else would you expect from the home of surrealism?

We’d love to know what your weirdest experience in Belgium has been. Leave your story in the comments below.

Alison Cornford-Matheson
Alison Cornford-Matheson is a Canadian travel writer, author, and photographer. She is the founder of Cheeseweb.eu, a website dedicated to slow and sustainable travel, off-the-beaten-path destinations, and cultural awareness through travel. She and her husband, Andrew, are the founders of RockFort Media, committed to helping entrepreneurs tell their stories online. Alison has visited over 45 countries and, after living in Belgium for 11 years, now lives full-time in a Bigfoot motorhome named Yeti with Andrew and their well-travelled cat.
Latest posts by Alison Cornford-Matheson (see all)
Pin334
Share418
Tweet2
Flip
Email