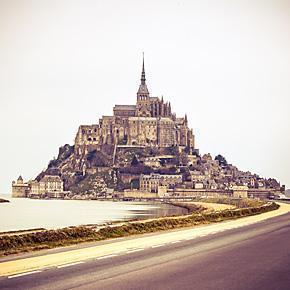 For many people, Normandy, France, conjures images of Saving Private Ryan and the D-Day landings. There is much more to discover in the region, including stunning coastal landscapes, dramatic architecture and a Viking heritage. We spent two weekends in this beautiful part of France and today I will share some of our findings.

We all learn about D-Day in school, but how many people know about the fantastic Viking history of Normandy? Normandy translates to ‘land of the Northman,’ ‘Northman’ being the Vikings.

On our first visit to Normandy, we discovered the architectural marvel that is Mont-Saint-Michel, a UNESCO World Heritage Site, with a Viking related history of its own.

Perched on a rocky islet in the midst of vast sandbanks, exposed to powerful tides between Normandy and Brittany, stands the ‘Wonder of the West’, a Gothic-style Benedictine abbey dedicated to the archangel St Michael, and the village that grew up in the shadow of its great walls.

Before the construction of the first monastery, in the 8th century, the island was called Mont Tombe, or ‘the Tomb.’ According to legend, the Archangel Michael appeared to St. Aubert, the bishop of Avranches, in 708, and instructed him to build a church on the rocky islet. Aubert repeatedly ignored the angel’s instruction until Michael burned a hole in the bishop’s skull with his finger.

Mont Saint-Michel – beautiful inside and out

The king of the Franks granted Mont-Saint-Michel and the Cotentin Peninsula to the Bretons, in the 867 Treaty of Compiègne, as he was unable to defend it against the continual assaults of the Vikings.

Modern Mont-Saint-Michel is in pristine condition, given all its history.  Only 44 people live there today. As you enter the site, narrow cobblestone streets lead you to the abbey at the top. A visit to the abbey is a must, to see its beautiful cloister garden. Shops and restaurants, serving a wide variety of dishes, using local ingredients, are also available inside.

Not far from Mont-Saint-Michel you can discover Chateau Gaillard, the stronghold of Richard I of England, feudal Duke of Normandy, better known by his nickname Richard the Lionheart, in recognition of his bravery in the Crusades.

Chateau Gaillard is where Walter Scott’s tales of Richard the Lionheart and Robin Hood, from Ivanhoe, meet history.

On our second trip to Normandy, we explored the Alabaster coast, including Étretat and Fécamp.

Étretat is best known for its cliffs, including three natural arches and the pointed ‘needle’. Artists and authors have been flocking to this site for years and it was a favourite of Claude Monet.

Étretat also has a Viking connection. Its name comes from the old Scandinavian languages “strut, strurt, strud” all of which refer to the needle once discovered by the Vikings.

You can see two of the three arches from the town, the Porte d’Aval, and the Porte d’Amont. The third arch, Manneporte, is the largest one, and isn’t visible from Étretat.

The rock arches of the Alabaster Coast

At low tide, you can follow marked pathways leading to 17th Century oyster beds and the legendary manhole. There is also an abundance of flora and fauna, including herring gulls, arctic fulmars and peregrine falcons.

Étretat is a popular destination on the Alabaster Coast of France, preferred by many Europeans, who flock to the gorgeous coast every year. No other section of the French shoreline resembles the unique breathtaking seascape of La Côte d’Albâtre, the Alabaster Coast. Its white pebble beach is perfect for a walk or just having a rest contemplating the world while listening to the sound of the waves. There is a small business on the beach renting kayaks and catamarans for a closer look at the cliffs.

Although we saw people bathing in the ocean, the water is cold and we were only brave enough to dip our feet promising that next time we will take a dive. I especially loved the colorful and well maintained fishermen’s boats moored on the beach.

I fell in love with a store called “Produits du Terroir” or local products. It was delightful to see and walk through. They sell a wide variety of local jams, sauces and Calvados, an apple brandy from the region of Lower Normandy. It is distilled from cider made from specially grown and selected apples. I spent at least half an hour looking around the shop and reading the labels. The owners are very nice and do not mind nosy tourists.

When hungry, do try a portion of Normandy mussels, they are fresh and delicious, served with a rich creamy sauce.

A stroll through Fécamp will take you to a few great attractions of this major town on the Alabaster coast. One of these is and a museum is devoted to the Fécamp fishermen who caught cod in the waters off Newfoundland. The fishermen’s houses can be seen by the port, and their chapel on the cliffs, with its votive boats (which express a wish) is worth the visit.

A major attraction in Fécamp is the Benedictine Palace and Distillery.  The Benedictine liqueur is and has always been produced here. Distillation is not performed every day which may leave you with the impression that you are visiting a museum but that is not the case, the Benedictine teams are working everyday. The tour of the cellar is short but enjoyable. The details of the little museum are beautiful including the large stained glass windows on the ceiling.

The Benedictine Palace and Distillery of Fecamp

Once in the cellar, you can see the oak casks used for the spirits to rest. They do so for 2 years. Another nice thing to see is the large collection of apothecary’s jars, dating from the 19th century. Each one is different.

Inside the Benedictine Palace

At the end of the tour you can sample one of the three types of liqueur made there: Benedictine, B&B or Benedictine Single cask. The last two are only sold at the Palace.

Normandy is a wonderful place to visit, beyond the D-Day beaches and war memorials. It is a region full of beauty and history and it has something to offer for everybody.

Adriana
I live in Germany with my husband and two children. I have a big passion for travel and photography. I am most happy when I travel, when I discover new cultures, see new places and try new foods.We have travelled to more than forty countries and almost two hundred cities. See some of the photos taken during our adventures at Life in A Suitcase and follow on Google+.
Latest posts by Adriana (see all)
Pin96
Share483
Tweet
Flip
Email