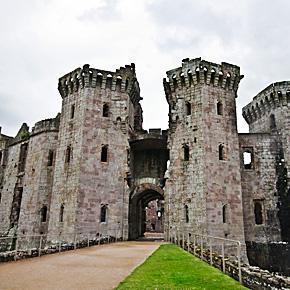 While Belgium has hundreds of beautiful castles to explore, sometimes it’s nice to step beyond our borders and step into the history of another country. One of our favourite non-Belgian castles is the late-Medieval Raglan Castle, in Wales.

Raglan castle is a beautiful ruin. It has everything you could ask for in a storybook castle: a moat with a drawbridge, towers, fireplaces a huge dining hall and a dungeon. Of course, before you could move in, it does need a roof and some floors. But now we’re just nitpicking.

The castle ruin, as it stands today, dates from the early 15th to 17th century. However it was probably built on a former Norman castle. It was rebuilt by Sir William ap Thomas, a veteran of the French wars and minor noble.

His son, William Herbert, found his fortune as a wine merchant and supported the House of York during the War of the Roses. He was the first Welshman to become an Earl. He used his wealth to expand and remodel Raglan Castle.

In 1492, Raglan Castle passed to Herbert’s daughter Elizabeth, who married Sir Charles Somerset, the Earl of Worcester. The Somerset descendants continued to prosper and update the castle until civil war broke out in 1642 between the Royalists and the Parliament.

Raglan castle was ordered destroyed, but it was so strong, only a few walls were damaged and the building and moat were looted. During the Restoration, the Somerset family regained possession of Raglan but the castle continued to be looted for stone until 1756 when it became a tourist attraction.

When we visited, it was a beautiful sunny day and there were very few other tourists exploring the site.

View of Raglan Castle from the grounds

Walking around Raglan Castle you are struck by the sheer size of the building. It must have been a truly imposing sight during its day.

The impressive moat and tower of Raglan Castle

From the tower, you have an almost endless view of the surrounding countryside.

View from the tower of Raglan Castle

Getting to Raglan Castle from Brussels:

When we visit Wales, we drive our car from Brussels to the Channel Tunnel. After crossing the Chunnel, we head west, towards Bristol. From Bristol, drive into Wales and toward Abergavenny/Y Fenni and on to Raglan Castle.

Alternatively you can take the Eurostar train from Brussels to London where you can continue by national train to Abergavenny.

For more photos of Raglan Castle, Check out our Facebook Page. Love castles, palaces, and ruins like in this article? Us too! Don’t miss the full listing of Castles we’ve visited in Europe and beyond.

Alison Cornford-Matheson
Alison Cornford-Matheson is a Canadian travel writer, author, and photographer. She is the founder of Cheeseweb.eu, a website dedicated to slow and sustainable travel, off-the-beaten-path destinations, and cultural awareness through travel. She and her husband, Andrew, are the founders of RockFort Media, committed to helping entrepreneurs tell their stories online. Alison has visited over 45 countries and, after living in Belgium for 11 years, now lives full-time in a Bigfoot motorhome named Yeti with Andrew and their well-travelled cat.
Latest posts by Alison Cornford-Matheson (see all)
Pin112
Share4
Tweet6
Flip
Email