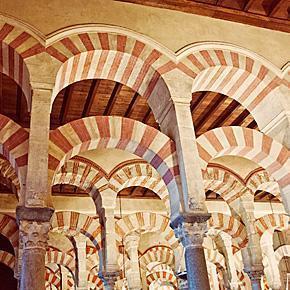 Visiting The Cathedral–Mosque of Córdoba, Spain

This entry is part 15 of 23 in the series Portugal & Andalusia 2012.
THIS POST MAY CONTAIN COMPENSATED LINKS. FIND MORE INFO IN MY DISCLAIMER.

The iconic arches and columns of the Mezquita, Cordoba, Spain

I had admired the photo in dozens of travel books – row upon row of columns topped with chequered arches. Shadow and light playing with each other as people stand, dwarfed under the soaring ceilings. Before I even knew where it was, I knew I had to visit the Cathedral-Mosque of Córdoba, Spain.

So, while planning the route for our road-trip of Portugal and Andalusia, Córdoba had to be on the list. Even though I knew nothing else about the city, I knew I had to see the Mezquita-Catedral, in person.

Arriving in Córdoba (sometimes referred to as Cordova, in English) in the evening, we decided to stroll by the Mezquita, before our visit the next day. We had no idea it would be so huge. Walking around the exterior and admiring the intricate carvings surrounding the enormous doorways, we began to get a taste of the grandeur we would see beyond the walls.

The imposing and decorative exterior walls of the Mezquita Cathedral dominate the historic centre of Cordoba. [Top] View from the bridge and the Puerta del Perdón [Middle and Bottom] West wall and decorative doorways.

Mezquita-Catedral means Mosque-Cathedral and the double-barrelled name refers to the church’s turbulent past.  The site has been a holy place since the history of Andalusia began, first as a pagan temple, then as a Visigothic Christian church.

Following the Islamic invasion, the church was dismantled and, in 785, construction began on a mosque that would become one of the most important in Western Islam. The construction of the Great Mosque happened in four phases, each more elaborate than the last.

In 1236, King Ferdinand III reconquered Cordoba and the mosque was reconsecrated as a cathedral. It wasn’t until the 1500s however, major works began on the main chapel, transept and choir. Visitors today see a gothic, renaissance and baroque cathedral, set inside Islamic architecture.

In 1984, the Mezquita was inducted into UNESCO’s World Heritage sites list, as part of the Historic Centre of Cordoba. However, its current popularity as a tourist destination hasn’t stopped the struggle between Christian and Muslim worshipers. Since the early 2000s, Muslim’s have campaigned the Roman Catholic church allow them to worship in the Mezquita and in 2010, two men were arrested for violently attacking guards who tried to expel them from the cathedral for attempting to pray. It’s not surprising a building with such a tumultuous history continues to be at the root of controversy today.

Our own visit to the Mezquita was luckily conflict and controversy free. Arriving early, as the gates were first opening to tourists, we even avoided the majority of the tour groups who flood the cathedral daily. Even so, we certainly didn’t have the site to ourselves.

After crossing the beautiful orangery, we stepped through the doors and there they were – the columns and arches I had admired in so many travel books. They were even more breath-taking in person.

There they are – the columns and arches of the Hypostyle hall

A picture may be worth a thousand words, but it still can’t capture the full beauty of the Mezquita.

I had expected those famous arches, all 856 of them, to be the most spectacular aspect of the Mezquita, but they were a mere taste of the opulence inside. In fact, it was difficult to decide whether the Islamic ornamentation outshone the Christian or vice versa. It was a duel of decoration.

On the Islamic side, there is the stunning Mihrab, a semicircular niche pointing the way to Mecca. Looking up, we were stunned by the beautiful dome of the Maqsura.

Detail of the Capilla Real, or Royal Chapel

The Christians, not to be outdone, are responsible for the Capilla Mayor, with its own striking dome and the enormous organ that fills the Cathedral with thundering music.

Inside the Christian centre of the Cathedral of Cordoba

Whatever your spiritual beliefs are, the Mezquita is a stunning mishmash of architecture that, by all rights, shouldn’t work together. Somehow it does. If only the humans who affected its history could be so harmonious.

In the magnificent architecture of the Mezquita Cathedral, we all become equal

Alison Cornford-Matheson
Alison Cornford-Matheson is a Canadian travel writer, author, and photographer. She is the founder of Cheeseweb.eu, a website dedicated to slow and sustainable travel, off-the-beaten-path destinations, and cultural awareness through travel. She and her husband, Andrew, are the founders of RockFort Media, committed to helping entrepreneurs tell their stories online. Alison has visited over 45 countries and, after living in Belgium for 11 years, now lives full-time in a Bigfoot motorhome named Yeti with Andrew and their well-travelled cat.
Latest posts by Alison Cornford-Matheson (see all)
Pin58
Share4
Tweet29
Flip
Email
Read more from this series...
Series: Portugal & Andalusia 2012