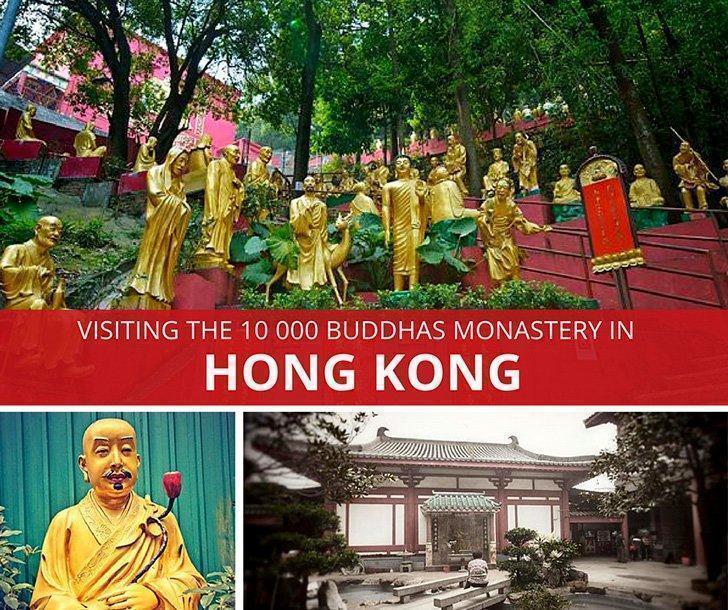 This entry is part 9 of 9 in the series CheeseWeb's Asian Adventure 2013.
THIS POST MAY CONTAIN COMPENSATED LINKS. FIND MORE INFO IN MY DISCLAIMER.

We visit the incredible 10000 Buddhas Monastery in Hong Kong’s New Territories. The trip was not without its challenges and we learned a few lessons the hard way.

In retrospect, I should have done more research, but the only thing I could focus on was the number of stairs; 431 steps in the humid Hong Kong heat.

The things I will do for a photo opportunity.

After a busy week of classes, I convinced Andrew a trip out of the city, to a Buddhist monastery, would be relaxing; once we got up the 431 steps.

To be fair, I thought I had figured out how to get from our hotel in central Hong Kong, to the Ten Thousand Buddhas Monastery in Sha Tin, in the New Territories. My trusty guide book simply said take the “East rail line to Sha Tin, take North exit and follow signs.” Easy Peasy.

Signage in Hong Kong had been a dream, so far, so I didn’t anticipate any problems, as we exited the train. Sure enough, a sign pointed us away from the station. But when we arrived at the next cross street, there was no sign to be found. We backtracked, searched around, but found nothing.

He was joking, but he had a point. The only reason for other Westerners to be in this area was the monastery. Unfortunately, as we rounded the next corner, we were surrounded by only Asian faces.

Suddenly, I looked up and spotted a pagoda. Ah ha! That must be it. Sure enough, there was a small yellow sign pointing up a pathway between a large parking-lot and an office building.

We must be in the right place…

“Weird. They must not want people walking through the parking lot,” I mused out loud.

We started down the path, but it seemed to dead-end at a chain-link fence. We doubled back and headed through the parking lot.

Still fixated on the 431 steps, I looked up and spotted something that filled me with joy.

“Look! An Escalator,” I cried. “They must have added it since the guidebook was printed.” We rode up, into the temple complex, feeling relieved at missing out on some of the 341 steps.

It looks like a monastery, doesn’t it? And there are a lot of stairs…

At the top of the escalator, we found a virtually illegible map inside a pretty courtyard. We could smell smoke and ash occasionally fluttered down, out of the sky. Someone was burning offerings.

It’s peaceful and beautiful… but is it the right place? There are a few Buddhas, but definitely not ten thousand.

We pushed on towards a small pagoda. The temple was peaceful but decidedly Buddha-less.

We discovered another escalator, so up we climbed.

“Odd. This doesn’t look like the photos I saw on-line,” I said to Andrew. “These almost look like memorial plots. The Buddhas must be further up.”

We craned our necks and there, way up on the hill, we spotted the Ten Thousand Buddhas Monastery. Unfortunately we couldn’t see any way to get to it from where we were.

Our series of escalators had run out, and it was clear we were in a cemetery, not a monastery. It was actually a lovely and peaceful place, and it was fascinating to explore. The air was filled with the smell of incense and offerings were piled in front of the cemetery plots. Here a small pyramid of oranges, there a can of beer and more incense. And everywhere were photos of loved ones who had passed on.

Our fascination was wearing thin in the heat however, and we were tired of traipsing up and down stairs that led nowhere. Whenever we seemed to be getting closer to the monastery, the path would veer off and we would find ourselves deeper inside the cemetery.

After exploring every corner, we found no way to access the monastery in the distance. We concluded it was closed for renovations, explaining the lack of signage from the train station.

As we were exciting the parking-lot, Andrew spotted a dozing security guard. “Ten Thousand Buddahs?” he asked as he nudged the guard awake.”

“No. Cemetery. Buddhas, there,” he gestured to the path we had tried to take before.

We traipsed back down the path and through the chain-link fence. Sure enough there was a concrete stairway and lining it on either side were giant golden Buddha statues.

431 stairs. After climbing up and down and around a Chinese cemetery in the hot Hong Kong sun. The things I do for a photo opportunity.

Before we set foot on stair #1, a monk emerged from the bushes, grinning from ear to ear.

“Welcome. Welcome, friend,” he beamed, as he grabbed Andrew’s arm. He snapped a bracelet on Andrew’s wrist and then turned and did the same to me. Turning back to Andrew, he held out a small bowl.

Andrew dug in his wallet and gave a small offering. The monk just smiled and continued holding out the bowl. Andrew added a bit more cash. The monk beamed more and gave Andrew a hug and then scurried back into the bushes.

As we climbed we noticed each of the life-sized Buddha statues was different. There were skinny Buddhas and fat Buddhas. Some Buddhas were standing, while others sat. There were Buddhas with animals and weapons and books. There were happy Buddhas and sad Buddhas and scary Buddhas. In fact the variety of Buddhas kept us entertained enough that we almost didn’t notice the climb. Almost.

Buddhas of all description…

Halfway up, we spotted a shady bench and an information sign.

It seemed we weren’t quite the savvy travelers we thought we were. I blame the heat.

Finally, we reached the first level of the monastery. As we approached, the Buddhas became even more interesting.

Fun with Buddha – We loved all of these creative Buddhas… some were downright wacky!

Arriving at the Ten Thousand Buddhas Monastery, the Buddhas became even more elaborate.

Despite the name, the Ten Thousand Buddhas Monastery, or Man Fat Tsz, isn’t actually a monastery at all. No monks live on site and it is managed by lay-persons. It is actually a series of temples, constructed by Reverend Yuet Kai, between 1949-1957.

When I say constructed, the reverend himself actually helped his followers carry building materials up the steep hill, despite his advanced age.

The reverend was 87, when he passed away in 1965, less than ten years after his temple was completed. He was buried for 8 months on the hillside, before his body was exhumed. It was completely intact, so his followers covered it in gold lacquer and robes and placed him in a glass case inside the temple with the title “Diamond Indestructible Body of Yuexi.”

After the temple buildings were completed, it took another ten years to create all of the Buddha statues;  many more than ten thousand.

In fact, the name, Ten Thousand Buddhas, doesn’t refer to the variety of golden statues we passed during our climb (there are about 500 of those), but rather the tiny, unique statues inside the main temple. There are 13,000 of them. In Cantonese, the term ‘ten thousand’ simply refers to a very large number.

There are a lot of Buddhas here

Wandering around the main level of the temple, that ‘large number’ becomes apparent. There are Buddhas on the pagoda, Buddhas riding animals, Buddhas in glass cases, Buddhas everywhere you look.

The first level of the Ten Thousand Buddhas Monastery

Needing a Buddha beak, and an excuse to get out of the sun, we ducked into the on-site vegetarian restaurant. The small, cheerful owner quickly filled our teacups and took our order. Our veggie noodles arrived quickly and we fueled up, while cooling down under the whirring fans.

After lunch, we tackled the last of the stairs (luckily only 69), past more Buddhas, to the upper terrace.

This area was undergoing major renovations. It seems there was a flood in 1997, causing landsides which heavily damaged the temple.

Even so, the buildings that are still open are impressive and contain, you guessed it, even more Buddhas.

Even more Buddhas on the upper level of the monastery

My favourite part of the complex was at the very end of the path and up a final few stairs. There, a dozen or so of the golden Buddhas seem to frolic on the hillside, amongst the trees.

Buddhas frolicking on the hillside

In a nook in the rock, sits a giant, white Kwun Yam statue. It is meant to be a fountain overlooking a waterfall. However, due to the repairs, the water wasn’t flowing. There were, however, plenty of turtles basking in the little ponds around the statue.

The trip back down the stairs, while quicker than the trek up, was still hard on the knees.

In the end, despite my poor planning, and the (more than) 431 stairs, it was one of my favourite days in Hong Kong. Our accidental visit to the cemetery had given us a look at an aspect of Chinese culture we never would have seen otherwise. The Ten Thousand Buddhas monastery itself was an incredible example of one man’s dedication to his faith and an absolutely incredible photo opportunity.

If you want to be a bit more prepared than I was, this great article on the Ten Thousand Buddhas Monastery describes exactly how to get there (and warns you about the fake monks).

Alison Cornford-Matheson
Alison Cornford-Matheson is a Canadian travel writer, author, and photographer. She is the founder of Cheeseweb.eu, a website dedicated to slow and sustainable travel, off-the-beaten-path destinations, and cultural awareness through travel. She and her husband, Andrew, are the founders of RockFort Media, committed to helping entrepreneurs tell their stories online. Alison has visited over 45 countries and, after living in Belgium for 11 years, now lives full-time in a Bigfoot motorhome named Yeti with Andrew and their well-travelled cat.
Latest posts by Alison Cornford-Matheson (see all)
Pin114
Share66
Tweet5
Flip
Email
Read more from this series...
Series: CheeseWeb's Asian Adventure 2013