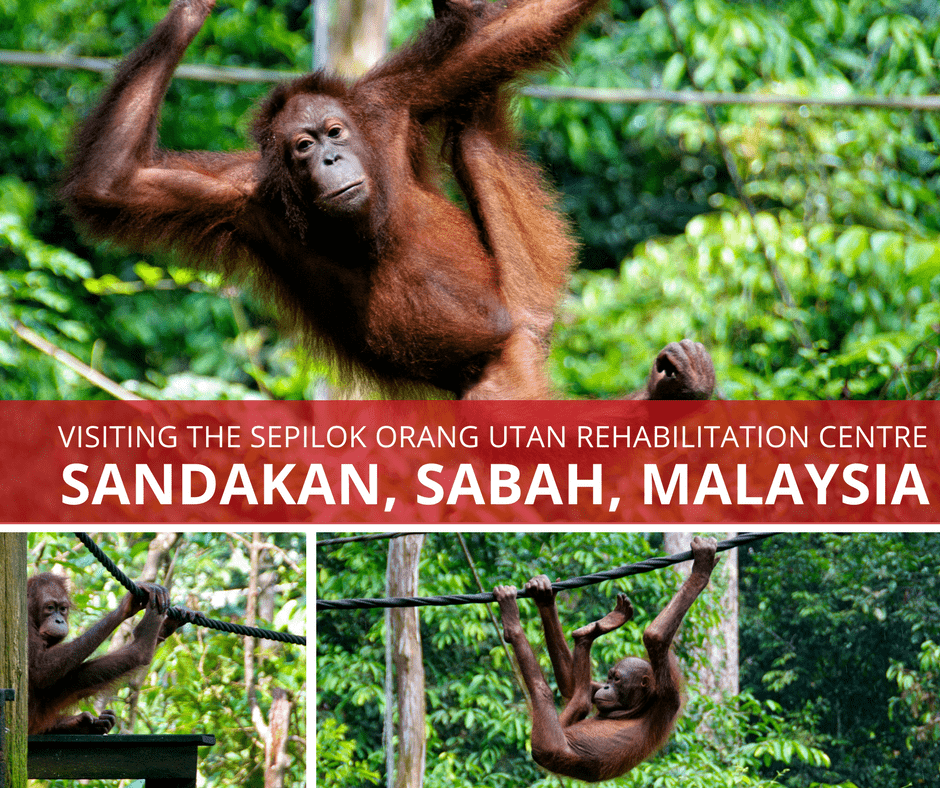 This entry is part 4 of 9 in the series CheeseWeb's Asian Adventure 2013.
THIS POST MAY CONTAIN COMPENSATED LINKS. FIND MORE INFO IN MY DISCLAIMER.

Nothing can describe the feeling of seeing the jungle leaves begin to rustle and you spot your first glimpse of a wild orangutan. On our recent trip to Borneo, we were among the lucky few who experience this thrill at the Sepilok Orangutan Rehabilitation Centre.

Our decision to go to Kota Kinabalu, Malaysia was random and based mostly on low-cost airfare. Besides the promise of sun and sand, however, there was one main reason the region of Sabah was our pick – the opportunity to visit the orangutans.

I am a sucker for furry creatures large and small. The opportunity to see orangutans in one of only two places they remain in the wild was just too good to pass up.

Contrary to my usual travel planning mania, I reserved very little of the Malaysian leg of our adventure in advance. Other than our flight and hotel, my only booking was a trip to visit the Sepilok Orang Utan Rehabilitation Centre.

Rather than trying to make the six-hour-plus trek to the other side of the province, on our own, we booked a full-day trip with Borneo Eco Tours. They ferried us from our hotel to the airport for a short flight to Sandakan, where they met us for our trip to visit the orangs.

There was one minor and unavoidable hiccup in our plan. For a reason never known to us, the last two flights of the day back to KK were canceled, meaning we had to scramble to get onto the earlier flight so we could get back to our hotel that night. Luckily we wouldn’t have to cut our visit to the orangutan sanctuary short.

We had the tour to ourselves that morning, and our guide cheerfully told us all about the Sandakan region as we headed towards Sepilok in our big white van. Sabah’s tourism is mostly small scale, but you will undoubtedly see many identical vans ferrying small groups of travelers to the province’s tourist hot spots.

Arriving at the Sepilok Orang Utan Rehabilitation Centre, we had one final stop before we could visit the orangs. We toured the small museum and were shown a presentation on the facility and its famous residents.

The Rehabilitation Centre opened in 1964, to take in injured and orphaned orangutans, whose mothers have been killed by logging or poachers. Some have also been rescued from people who were illegally keeping them as pets.

The babies are often sick and weak, due to malnutrition, and have none of the skills necessary to survive on their own. The rehabilitation facility itself is not open to the public, so you can’t go and visit the baby orangutans, as they are very prone to human illnesses, at this stage.

Once the babies are healthy, they are trained in all the skills they need to live in the wild. Then they are gradually released back into the jungle. The centre sits on 43km2 of protected forest at the edge of Kabili Sepilok Forest Reserve, so the orangutans have plenty of jungle where they can live in relative safety.

These incredible creatures are endangered. They are only found on Borneo and the Indonesian island of Sumatra (The Sumatran orang is critically endangered.) On Borneo, the orangs are losing their habitat to palm plantations and logging. As we were to learn later in the week, it is difficult to balance the needs of a growing population and the needs of the jungle inhabitants.

After the presentation, we headed to the feeding platform via a long boardwalk, through the jungle. By 10 AM, it was already hot and very humid as we trudged deeper into the forest. Finally, we arrived at the platform and gathered around.

The orangutans are fed twice a day here, but as they have already been released into the wild, they are free to come and go as they wish. There is no guarantee any orangs will visit the platform, but our guide told us it is very rare not to have a sighting here.

Waiting for the first sighting… and here he comes!

As we waited in the sun, the small crowd began to grow antsy, scanning the trees for a sign. Finally, leaves began to rustle, and we collectively held our breath. Then, a flash of reddish-gold was spotted between the green jungle leaves. Finally, the ropes, giving easy access to the feeding station, began to wobble and our first orangutan appeared.

It may look like a zoo, but these Orangutans are free to come and go as they like.

Delicately, and without a second glance at his audience, he settled himself on the platform and began to eat his lunch.

The word orangutan comes from two Malay words, Orang Utan, meaning man of the forest. Watching his nimble fingers pick over the ripe fruits and the expressions of pleasure passing his face, it was impossible to deny how closely related we are to these creatures.

Checking out what’s for lunch

It wasn’t long before more leaves began to rustle and we were joined by three more orangutans. They ate and played and relaxed, and we stood in awe, with cameras snapping.

Time to share! 4 Orangutans arrived for lunch that day.

Suddenly, as happens in the rainforest, it began to rain. While the humans were donning jackets, the orangs were plucking leaves from the trees and using them as umbrellas. At times it was hard to tell who was imitating whom. Orangutans are the most intelligent of the primates and often use tools and objects in creative ways.

Just look at those hands and feet!

We are not amused!

Finally, our time with the orangutans had come to an end, or so we thought. We headed back to the lodge to grab a bite to eat before beginning our journey home. While slurping my noodles, I noticed something dart by the window from the corner of my eye.

“Was that an orang?” I asked Andrew. We leapt to the window and, sure enough, a medium-sized male was strolling along the boardwalk. It wasn’t long before one of the rangers came along and shooed him back into the safety of the jungle.

We finished our lunch and couldn’t stop talking about these fascinating creatures.

We had flown across the island and spent several hours in a van to see five orangutans in the wild. Was it worth it?  Definitely! And I would do it again in a heartbeat.

Was our trip to see Sabah’s orangutans worth it? YES!

We visited Sepilok on Borneo Eco Tours Orang Utan Encounter which cost 200 MYR each (about 100 Euro for both of us.) This included airport transfers in KK and Sandakan, lunch and admission to the Rehabilitation Centre. The tour also includes several other sites in Sandakan depending on your flight times.

Our flights to Sandakan with Malaysian Airlines were not included. They cost 362 MYR for both, about 92 EUR.

If you are already in Sandakan or prefer to arrange your own flight, you can book a similar tour here.

Alison Cornford-Matheson
Alison Cornford-Matheson is a Canadian travel writer, author, and photographer. She is the founder of Cheeseweb.eu, a website dedicated to slow and sustainable travel, off-the-beaten-path destinations, and cultural awareness through travel. She and her husband, Andrew, are the founders of RockFort Media, committed to helping entrepreneurs tell their stories online. Alison has visited over 45 countries and, after living in Belgium for 11 years, now lives full-time in a Bigfoot motorhome named Yeti with Andrew and their well-travelled cat.
Latest posts by Alison Cornford-Matheson (see all)
Pin120
Share37
Tweet6
Flip
Email
Read more from this series...
Series: CheeseWeb's Asian Adventure 2013