Belgium in a Glass – Exploring the Country through Belgian Beer

This entry is part 3 of 16 in the series Belgium in a Glass.
THIS POST MAY CONTAIN COMPENSATED LINKS. FIND MORE INFO IN MY DISCLAIMER.

Belgium is home to more than a thousand different varieties of beer produced by 178 different breweries. Some of them are known around the world, like Stella Artois, while others, such as 3 Schténg, are obscure.  With so much variety how does a newcomer know where to begin?

This post marks the start of our new series, Belgium in a Glass,  which will explore the country through Belgian beer.

Belgium is typically known for four things: beer, chocolate, frites, and waffles. While we’ve written about most of these, we’ve never written about beer; primarily  because Alison’s not a big fan of beer and she does almost all of the writing. No more excuses, it’s time for me to step up and fill this gap here on CheeseWeb!

Each beer tells a story linked to the history of its brewer, the region, and the country. In each article, we’ll explore the world of Belgian beer, by examining the different types and showcasing examples, including a bit of history and tasting notes. Our goal is to learn more about Belgium while enjoying its favourite beverage.

A Brief History of Beer Making in Belgium

Beer has been brewed for a long time in this part of Europe. Originally the monopoly of monks, beer was eventually commercialized and became an important part of day-to-day life. The number of producers grew until the French revolution, when monasteries, such as Orval, were destroyed. The industry eventually recovered and reached a peak of 3000 Belgian breweries in 1900.

Unfortunately, the world wars and the growth of alternative alcoholic drinks drove the industry into another steep decline, reducing the number of brewers to about 100, by the end of the 20th century.

The growth of international competition also forced many breweries to merge, creating massive conglomerates such as AB InBev. However, the 21st century has shown a glimmer of resurgence; the number of brewers has grown from 134 to 178 over the last 5 years.

Broadly speaking, Belgium has three types of beers: Lager (mainly Pilsner), Lambic, and Ale. Pilsner beer is the most consumed in Belgium and includes Maes, Stella Artois and Jupiler. However, “the great beers of Belgium are not its lagers.”  The real diversity, and variety, is found in the Lambics and Ales. 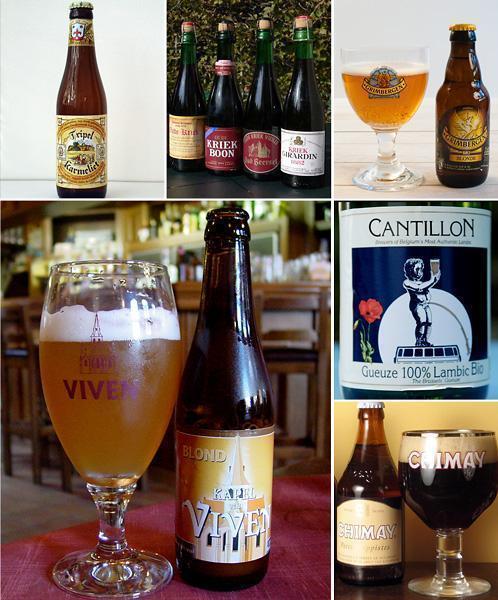 Belgian Beer – Where do we begin?

Coming Up in Belgium in a Glass

But this leads us to our current issue: with over a thousand different beers, how do you choose? You can be forgiven for being paralyzed by the complexity of choice. It’s simpler to stick to the well-known brands. We’d like to change that!

In this series of articles we will discuss

If you have a question you’d like answered in this series, please contact us or let us know through the comments. I look forward to sharing my favourite beer with you and discovering more about Belgium along the way!

Andrew
Andrew is our resident tech-geek and is normally found lurking behind the scenes on CheeseWeb doing things with code that Alison finds mysterious. He comes out of hiding occasionally to write about history and technology. He loves castles, driving on narrow, twisty mountain roads and relaxing with a glass of peaty Scotch. Follow Andrew on Google+
Latest posts by Andrew (see all)
Pin151
Share78
Tweet18
Flip
Email
Read more from this series...
Series: Belgium in a Glass