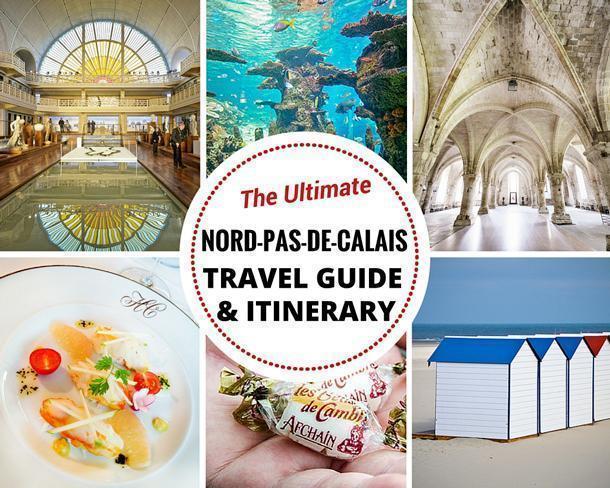 We share our ultimate guide to travel to and in Nord-Pas-de-Calais so you have all the information you need to plan your travel to this region of Northern France.

Nord-Pas-de-Calais is one of the most under-rated regions of France. Folks often pass through on their way to and from Brussels, Paris, or the Channel ferry without pausing to give it the recognition it deserves. Despite this, there is plenty to see and do in Nord-Pas-de-Calais for slow travellers, weekenders, and foodies alike. From the battlefields of the Somme to the pristine beaches of the Opal Coast to the art and culture of Lille, Nord-Pas-de-Calais should definitely be on your France bucket list.

This is our ultimate slow travel guide to Nord-Pas-de-Calais. Use it to inspire your visit to this lesser-known but exciting part of France. At the end, we even include a 9-day itinerary to help you make the most of your time in Nord-Pas-de-Calais. Let’s go!

Where and what is Nord-Pas-de-Calais

Up until January 1st, 2016, Nord-Pas-de-Calais was a region of France in its own right; a joining of the country’s Nord and Pas-de-Calais departments. Now it is joined with Picardie to form Nord-Pas-de-Calais-Picardie (Rolls off the tongue right? New names will be assigned to France’s new uber-regions later in 2016).

The region is on France’s Atlantic coast with Belgium to the north, Ile-de-France to the south, Normandy to the southwest, and (new uber-region) Alsace-Champagne-Ardenne-Lorraine to the southeast.

Like all of France, French is the only official language. However, because of its proximity to Belgium and the UK (via ferry and Channel Tunnel), English is more widely spoken here than some other parts of the country. Of course, your results will vary based how urbanised the part of Nord-Pas-de-Calais you’re visiting is. You’ll also find a strong Dutch/Flemish character in parts of Nord-Pas-de-Calais in the architecture, cuisine, and even in the language.

Who Should Visit Nord-Pas-de-Calais

As mentioned in the intro, Nord-Pas-de-Calais has something for just about everyone. Lille is a major urban centre with both historic and modern areas. It’s a fantastic destination for foodies and culture buffs. Nature-lovers will also find plenty to do in the region, from exploring the white sand beaches to biodiverse marshes and forests. There are family-friendly activities like the NAUSICAA aquarium and a sweeping history from roman ruins to the remains of the world wars. There are art galleries and museums both big and small and the people are friendly and hospitable. This really is a prime slow travel destination as it is not on the package tourist radar and the attractions feel local and undiscovered.

It’s hard to think of anyone who couldn’t find something to enjoy in Nord-Pas-de-Calais. However, if you are looking for perpetually sunny skies or theme-park-style attractions, Nord-Pas-de-Calais is probably not the best choice.

Transportation to and in Nord-Pas-de-Calais

Given its position between the major centres of Brussels and Paris, Nord-Pas-de-Calais is easily accessible by just about all forms of transportation.

By Car: Nord-Pas-de-Calais is well-connected by roads and, arguably, the easiest way to explore the area is by car. As many of the destinations are more rural, driving your own vehicle offers the most flexibility and convenience.

You can even bring your own vehicle to France from the UK either by ferry (see below) or via the Euro Tunnel. Here, you drive your car onto a train and remain in your car while the train makes the journey through the tunnel. We’ve done this trip multiple times and nothing beats the speed and convenience of travelling across the Channel in this way.

By Train: Nord-Pas-de-Calais is also well connected by train. Lille, in particular, is a hub for rail within the region from around France via TGV and also is a stopping point for major European rail lines like Eurostar (from London) and Thalys (From Paris, Brussels, and Amsterdam). Other hubs within the region include Dunkirk, Calais, Boulogne, Le Touquet, Arras, Douai, Valenciennes, and Cambrai, among others.

An overview of rail lines in Nord-Pas-de-Calais.

By Bus: Similarly, Nord-Pas-de-Calais is well serviced by bus routes, including buses on major European routes. We travelled from Brussels to Lille on iDBUS (now called OuiBus) and service was quick and comfortable. OuiBus now offers service to Lille from Paris (centre and airport), Amiens, Brussels, Antwerp, Amsterdam, Rotterdam, and London.

By Ferry: If you are visiting Nord-Pas-de-Calais from the UK an alternative to the Channel Tunnel is the ferry. The ferry runs from Dover to Calais and is operated by P&O Ferries. The ferry trip takes 90 minutes and on clear days provides great views of the white cliffs of Dover.

By Airplane: Arriving in Nord-Pas-de-Calais by air is the least convenient transportation option. There is only one airport of any size in the region, Lille-Lesquin Airport.  Scheduled flights are available from Biarritz, Marseilles, and multiple locations in Corsica, as well as Geneva, Djerba, and several destinations each in Greece, Portugal, and Morocco. There are two small airports on the coast. Le Touquet airport only offers regular flights via Lydd Air in Kent, UK. The Calais-Dunkerque Airport only services freight and charter flights. Besides Lille Airport, the closest airport of any size is actually Brussels South Charleroi, 100km from Lille.

Where to Stay in Nord-Pas-de-Calais

Because of its close proximity to our home-base in Belgium, we didn’t spend time in many hotels in Nord-Pas-de-Calais. However, our personal recommendations include the following:

What to Eat in Nord-Pas-de-Calais

If you are familiar with Belgian cuisine, food in Nord-Pas-de-Calais won’t be terribly surprising. You’ll find mussels and fries, more beer than wine, even waffles and endive. The region also shares some typical Flemish dishes like waterzooi, carbonnade, and meatballs. Naturally, on the coast fresh seafood is king while the interior is known for agriculture including apples, potatoes, cauliflower, artichokes, peppers, and strawberries. A few regional specialties to try are:

A selection of cheeses from Nord-Pas-de-Calais, France

Where to Eat in Nord-Pas-de-Calais

If you love great food, your first stop in the area should be Lille, a true foodie city with a full spectrum of restaurants, gourmet shops, and a fantastic farmer’s market. Read our article for our top foodie finds in Lille.

Even if you don’t stay at the Hotel Chateau Cléry, near Boulogne (and you really should) don’t miss its restaurant, Le Berthier. The fine-dining Menu Dégustation is exceptional.

For Michelin-starred fine-dining, La Matelot, in Boulogne-Sur-Mer is a must. Seafood is the star of the show and each course is well thought out and beautifully presented.

For a more casual seafood feast, order the seafood platter at La Marie Galante in the village of Audresselles.

As mentioned above, the gastronomic menu at Chateau de la Motte is also a fantastic value.

Need more inspiration? Check out the restaurant suggestions for Nord-Pas-de-Calais on the Fork.be. Just type the city name into the search bar. You can even book a table online.

What to Buy in Nord-Pas-de-Calais

Meert is one of the many foodie shops in Lille, France

For us, the best souvenirs are always edible ones and this is true for Nord-Pas-de-Calais. To be sure you’re getting authentic regional products you can discover shops around the region on the Produits Regionaux Nord-Pas-de-Calais website.

What to Pack for Nord-Pas-de-Calais

As Nord-Pas-de-Calais has the typical Northern European climate: cool, wet, and unpredictable. Add to this weather the coastal influence and all you can be certain of is a mixed bag of weather. If you plan to spend a lot of time outdoors, layers are essential and rain-gear is highly recommended. This is not to say you won’t experience any good weather – but you may also get rain, hail, and/or high winds on the same day.

Top 10 lists are always subjective and ours is no exception. We certainly haven’t been to every tourist site in Nord-Pas-de-Calais so we can only share our own experiences. As such, here is our personal top 10 in no particular order. For more detail on individual sites follow the links to our expanded articles.

The NAUSICAA Aquarium is the largest in France

Take time for a walk on the Opal Coast’s white, sandy beaches

Nord-Pas-de-Calais has one UNESCO site of its own, the Nord-Pas de Calais Mining Basin, and a number of sites shared with other regions and countries.

Because we were based in Brussels, we visited Nord-Pas-de-Calais in a series of short trips. However, if you have more time, you can see much of the area in one go. Below is a sample itinerary combining our favourite activities in Nord-Pas-de-Calais with a few extra bonuses, depending on your preferences. It’s created in a loop, so you can begin the itinerary wherever makes sense for you. I’ve also shown how you can create several smaller itineraries as we did.

Here is a map of the route with the main stopping points. You can click to open a larger view.

Check out the second-hand book market at the Vieille Bourse, in Lille

Before leaving Lille, make a trip to La Piscine in Roubaix

Explore the Audomarois Marsh with a boat tour from Isnor

Vimy Ridge, in Northern France, should be on every Canadians list of war sites to visit

If you are pressed for time, the only essential on Day 6 is Vimy Ridge. This can be done on the way to Chateau de la Motte for a longer driving day. If you have more time, add a night’s stay in Arras or Lens and take advantage of some or all of our ‘detours’ in the area.

The Roman Ruins at Bavay are well worth stopping for

One of the reasons I created this resource is I was disappointed in the availability of printed information for Nord-Pas-de-Calais. (If you read French, there are a few more options.) If, like me, you like to have a printed guidebook, in addition to online resources, here are a few possibilities. [NOTE: These are not personal recommendations, just suggestions based on Amazon and other reviews online.]

The following are useful online resources for further planning:

For even more Nord-Pas-de-Calais slow travel inspiration, check out our board on Pinterest:

Follow CheeseWeb.eu – Slow Travel in Europe’s board Nord Pas de Calais Picardie France on Pinterest.
We hope our guide encourages you to get off the motorways and explore this lesser-known corner of Northern France. We’d also love to hear your suggestions for the area. Leave them in the comments below.

Alison Cornford-Matheson
Alison Cornford-Matheson is a Canadian travel writer, author, and photographer. She is the founder of Cheeseweb.eu, a website dedicated to slow and sustainable travel, off-the-beaten-path destinations, and cultural awareness through travel. She and her husband, Andrew, are the founders of RockFort Media, committed to helping entrepreneurs tell their stories online. Alison has visited over 45 countries and, after living in Belgium for 11 years, now lives full-time in a Bigfoot motorhome named Yeti with Andrew and their well-travelled cat.
Latest posts by Alison Cornford-Matheson (see all)
Pin607
Share149
Tweet5
Flip
Email