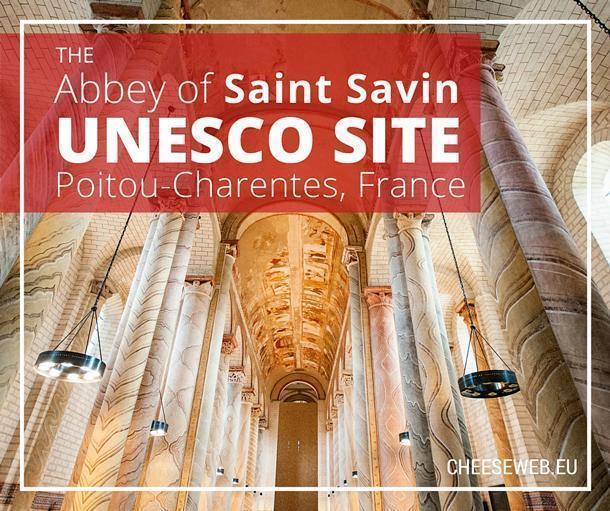 The Abbey of Saint-Savin-sur-Gartempe, in Poitou-Charentes, France, is on the UNESCO World Heritage list for its incredible frescoes depicting scenes from the bible.

One of the reasons I love visiting UNESCO World Heritage Sites is for the incredible feats of art or architecture that make you stand back and wonder how humans could have conceived of and created them in the time period they did. France is brimming with examples of such sites. We’ve marvelled at the architecture of the Pont-du-Gard and admired the complexity of the cave paintings at Lascaux. L’Abbaye de Saint-Savin-sur-Gartempe, the abbey of Saint Savin on the Gartempe River in Poitou-Charentes, France, is just such a place.

The Abbey of Saint-Savin is an impressive work of Roman architecture. (via wiki)

With its origins dating from around 800 AD, the current abbey’s grand 11th-century roman architecture is impressive in and of itself. But it’s an artistic contribution that makes Saint Savin truly remarkable. The abbey church is decorated, floor to ceiling, with colourful paintings and frescoes depicting scenes from the bible. These frescoes are believed to be the creation of one monk who taught others how to mix paints from the materials found in the area.

The remains of a fresco inside Saint Savin’s Museum.

These frescoes were almost lost to the ravages of war and time but they were restored in the mid-19th century and again between 2005-2008. The vivid colours and depictions have earned Saint Savin the title ‘The Romanesque Sistine Chapel.’

Our visit to the abbey of Saint Savin began in the museum, which provides a scaled-down version of the ceiling frescoes, with a key to the stories portrayed on the ceiling. There is also an excellent handbook provided that you can take into the church to use as a guide to the paintings.

A model of Saint Savin Church with frescoes

Close-up of the frescoes on the model of Saint-Savin.

A fascinating aspect of the museum is the short film explaining the history of the paintings. While it is in French, it’s pretty easy to understand the visuals even without a grasp of the language. It’s a bit over-dramatic in a typically French way. However, it does portray the challenges of undertaking such a project with limited tools and materials in a way that makes you fully appreciate the end result.

With this understanding in mind, we were ready to enter the church. Stepping inside, I was still taken aback by the colour, scale, and complexity of the paintings.

Inside the colourful Saint-Savin Abbey Church, in Poitou-Charentes, France.

The entire church is a riot of colour and, when you look closely, you realise it has all be hand painted, from the bricks on the walls to the faux marble columns. These details were added in the 19th century and add to the drama of the church, accentuating the frescoes themselves.

Every detail inside Saint Savin is hand painted, including the bricks.

The columns were painted in the 19-century to resemble marble.

Even on the ceiling, painted bricks and decorations have been added.

With the high, vaulted ceilings, you need to crane your neck to appreciate the frescoes. (Binoculars would be an asset here if you have the foresight to bring them). The stories depicted in the paintings range from Genesis and the creation all the way to Exodus.

The painted columns lead your eye to the incredible frescoes.

Some of them are obvious, like Noah’s ark and the tower of Babel, while others required me to refer to my guide. All the while, I had images from the film of a monk mixing earth-toned paints atop rickety scaffolding in the candlelight running through my head.

There are even paintings in small niches around the church.

The entryway to the church is decorated with Christ in his majesty.

Whether you know your bible stories or not, it’s an awe-inspiring sight.

The Abbey of Saint-Savin is roughly an hour from Poitiers, in Poitou-Charentes, but is well worth the detour if you are interested in art, history, or simply enjoy collecting UNESCO World Heritage Sites like we do. Combine it with a stay and meal at the stunning Les Orangeries sustainable hotel, only 20 minutes away, for a perfect getaway in the region.

Alison Cornford-Matheson
Alison Cornford-Matheson is a Canadian travel writer, author, and photographer. She is the founder of Cheeseweb.eu, a website dedicated to slow and sustainable travel, off-the-beaten-path destinations, and cultural awareness through travel. She and her husband, Andrew, are the founders of RockFort Media, committed to helping entrepreneurs tell their stories online. Alison has visited over 45 countries and, after living in Belgium for 11 years, now lives full-time in a Bigfoot motorhome named Yeti with Andrew and their well-travelled cat.
Latest posts by Alison Cornford-Matheson (see all)
Pin167
Share28
Tweet5
Flip
Email