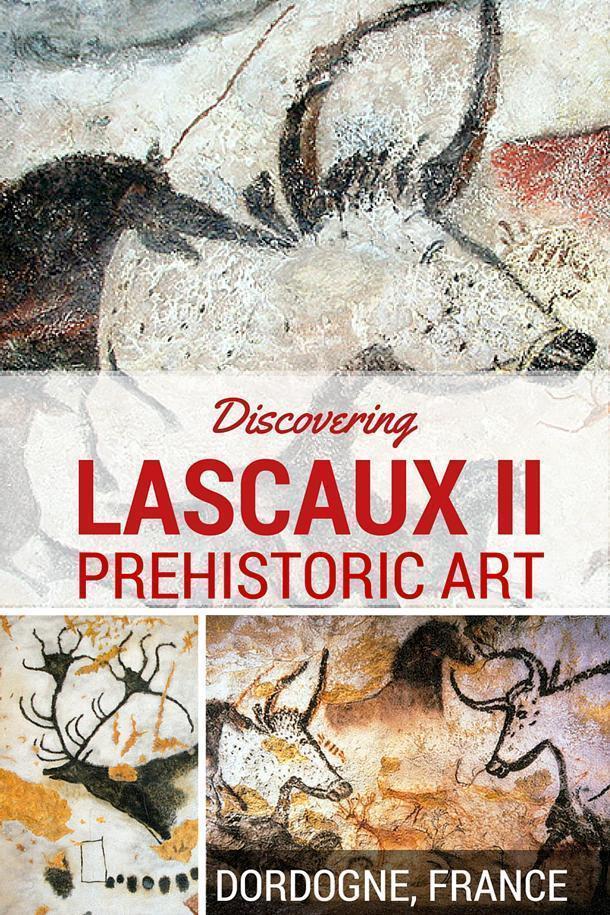 To appreciate the UNESCO listed prehistoric cave paintings of Lascaux, France, you must take a tour. We descend into Lascaux II to discover 17,000 year old art.

On September 12th, 1940, Marcel Ravidat stumbled into a cave system painted with thousands of images more than 17,000 years old. These artworks are remarkable not just for their age, but also for the painters’ use of perspective and depth. More than simple stick figures, paintings of bulls, horses, stags, bison, birds, and more come alive on the walls under the flicker of candle light. Lascaux quickly became a popular tourist destination.

Unfortunately, by 1955, the carbon dioxide, heat, and humidity, from 1200 visitors a day was taking its toll on the art and, in 1963, the Lascaux caves were closed. Recognising the site’s value, UNESCO listed Lascaux as a World Heritage Site, in 1979, along with several other prehistoric sites in the Dordogne region of Aquitaine.

During the closure, the paintings were restored, while a full scale replica of part of the cave system was built 200 meters away, called Lascaux II. Opened in 1983, Lascaux II features an exact copy of the Great Hall of the Bulls and the Painted Gallery. It took 20 artists 11 years to recreate this part of the cave, including 6 years just for the paintings. It was an extraordinary challenge.

Copy of a prehistoric painting of the Lascaux cave, Musée d’Aquitaine, Bordeaux, France (via wiki)

I first learned about Lascaux when a traveling exhibit, Lascaux III, visited Brussels. Initiated in 2010 and first exhibited in Bordeaux in 2012, Lascaux III copies five parts of the cave in excruciating detail. The paintings were beautiful and much more advanced than I expected. This exhibit whetted our appetite to learn more about the paintings, so a visit to the original site became a must.

We pulled Amelia into the Lascaux parking lot a bit earlier than our scheduled, English speaking tour. You can only visit as part of a guided tour, conducted in various languages (English, German, and French being the ones we heard that morning).

During the summer (April to September), tickets must be purchased at the office in the centre of Montignac, the closest town. No tickets are sold on-site, in the summer, to control the number of people arriving at the same time and taking up the limited parking. It makes sense, but it’s a pain to find parking in Montignac and buy a ticket, especially in a motorhome.

Tickets in hand, we explored the gift shop and waited for our tour group to be called. Tip: Don’t bother arriving early for your tour, as there is not much to see or do. Shortly, our tour group was called forward and about 25 people gathered at the top of the cave’s stairs. Yes, although it is a recreation, it is still buried underground – a nice touch.

Descending into the cave, our group fills a small room, with exhibits all around us. Our guide begins by explaining the history of the cave, explaining how the paintings are exceptional, because they have retained their colour. This is thanks to the impermeable soil that sealed the site thousands of years ago.

The cave was only discovered after a tree fell in a storm and the roots tore open a hole, exposing an entrance. Combined with the 1994 discovery of the Chauvet Cave, another site featuring incredible prehistoric art, Lascaux’s chance unearthing makes me wonder how many other buried caves are still to be found.

Detail of a horse painting in the Lascaux Caves. (via wiki)

Next we step into the Great Hall of the Bulls. It is incredible. The entire 19m length is covered with paintings of animals. The attention to detail in the recreation is phenomenal. I can’t find a better word. The paintings on the ceiling hang above you, just as they would in the real cave. The movement in the animals, and the details in some of the heads, is just staggering. The view was even more powerful when the guide used a lighter to show how the flickering light makes the walls come alive with different beasts: Ibex, bison, aurochs, and horses – Phenomenal.

From The Great Hall of the Bulls we descend into the Painted Gallery (also called the Axial Gallery). Here, all the same animals are depicted, many drawn using the contours of the cave wall to enhance the perception of depth. The largest painting is also found here, a 5.5m image of a black bull. Our guide points out some of the techniques used by these prehistoric painters, including using their hands to create rounded forms and blowing paint to create a blurred effect. I am still amazed by the level of detail and technique shown by these artists.

A tour of Lascaux takes about 40 minutes and provides you enough information to understand the site’s importance. With the right guide, I could spend hours learning about the caves and the painters. Fortunately for Alison, it was high season and there wasn’t time for a lot of questions.

A painting of the Giant Deer from Lascaux. (via wiki)

If you want to know more about Lascaux’s time period, visit Le Thot Espace Cro-Magnon. Le Thot includes information about the extinct animals found on the walls, plus replicas of other parts of Lascaux not found in Lascaux II: the Nave and the Shaft.

Creating Lascaux II took 20 painters 11 years to complete. It is so incredibly detailed; you don’t even realize you’re looking at a fake. Today, Lascaux’s administration is hard at work creating Lascaux IV, a new facility that will replicate all of the painted sections of the cave. This ambitious new project is due to open at the end of 2016, just outside of Montignac. I am looking forward to returning, to learn more about the caves and see the parts not present at Lascaux II.

Construction of Lascaux IV, in Montignac, France, as of Aug. 2014 (via wiki)

If you are interested in prehistory, Lascaux must be on your bucket list. Frankly, with Lascaux, Chauvet, cliff houses like the Maison Forte de Reignac, biodynamic wine, and so much history, you should just add the entire Dordogne region to your bucket list!

We’d like to thank the Comite Departemental du Tourisme Dordogne for hosting us in the area. As always, all opinions are our own.

Andrew
Andrew is our resident tech-geek and is normally found lurking behind the scenes on CheeseWeb doing things with code that Alison finds mysterious. He comes out of hiding occasionally to write about history and technology. He loves castles, driving on narrow, twisty mountain roads and relaxing with a glass of peaty Scotch. Follow Andrew on Google+
Latest posts by Andrew (see all)
Pin218
Share26
Tweet
Flip
Email