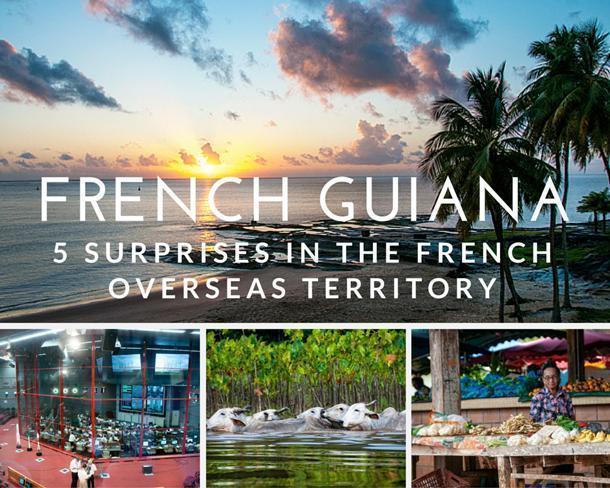 This entry is part 7 of 8 in the series French Guiana.
THIS POST MAY CONTAIN COMPENSATED LINKS. FIND MORE INFO IN MY DISCLAIMER.

With a rich diversity of both nature and culture, French Guiana has plenty to offer curious travellers – including a few surprises.

I have a confession to make. I knew absolutely nothing about French Guiana before I visited it earlier this month. In fact, when Atout France asked if I’d be interested in visiting one of the French Overseas Territories, I was imagining the white sand beaches of the Caribbean. When they mentioned Guyane, I actually had to look it up on a map…

Staring back at me was a small (by South American standards) territory, nestled between Suriname and Brazil, with small cities dotted along its coastline, and a whole lot of forest. Normally, I research a destination to death before visiting, but with the chaos of beginning our motorhome adventure and our busy schedule discovering France, I found myself on a plane to Guyane, before I had even picked up a guidebook. And you know what? I’m glad.

My lack of preparation meant I didn’t have time to form a lot of misguided opinions of French Guiana, which left me totally open to being surprised by a diverse and exciting corner of the world. 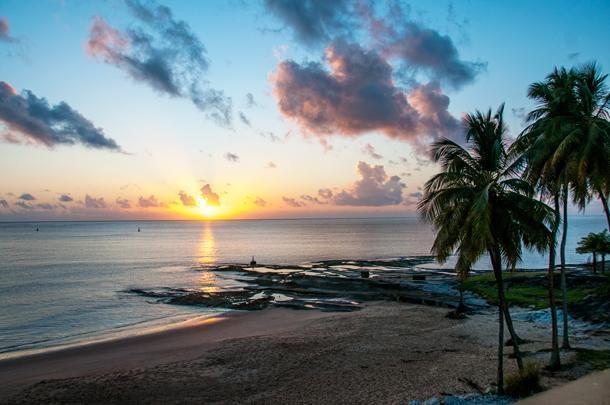 My desire for sandy, tropical beaches was granted in French Guiana as well

The few ideas I did have were based on a (rather terrifying) visit to an International Vaccination Centre, in Cahores, to get my mandatory vaccination against Yellow Fever. While the doctor was explaining the risks of diseases like malaria (a possibility in any tropical country), I was busily conjuring up visions of an undeveloped country, with dirt roads and villages made of palm fronds.

Ok, maybe my visions weren’t quite that extreme, but I was still way off base.

What I discovered, not long after landing, was a highway network, not unlike those in France (even the road signs are the same), complete with modern business parks, filled with all the shops we know here in Europe. While Guyane definitely feels tropical and you are never far from the forest (See surprise #2), it is also culturally and biologically diverse and home to some cutting-edge technology we rely on every day. 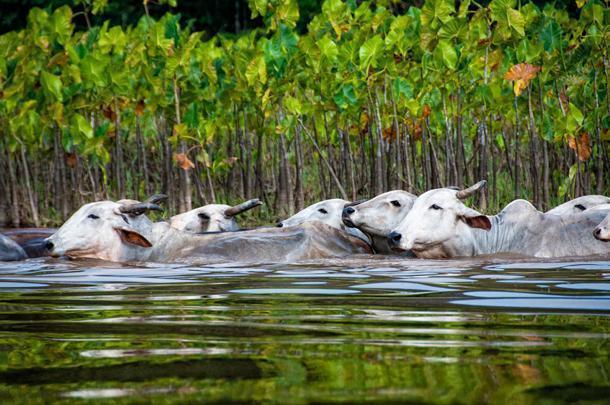 I will be writing a series of articles about my discoveries in French Guiana over the coming weeks, but today I want to begin by sharing my 5 biggest surprises about Guyane, to help you shed some of the misconceptions I, and many other first time visitors, had about this amazing French Overseas Territory.

1. The Diversity of People and Cultures

I had always thought of Brussels as a culturally diverse city. With its huge international community, there are certainly many nationalities represented in the European capital. But this diversity doesn’t hold a candle to the range of ethnicities that populate Guyane. 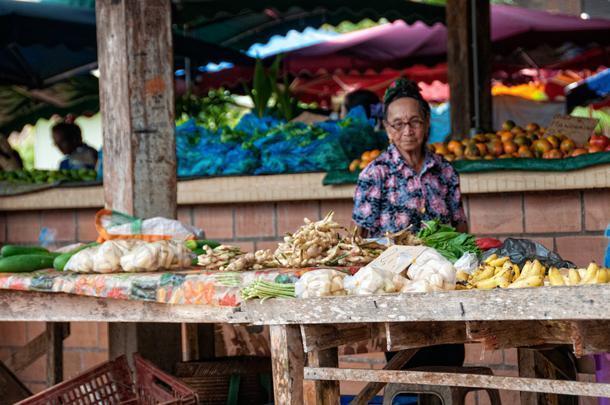 The village of Cacao was populated by Hmongs who left Laos in 1977.

The European colonists arrived, adding Caucasian blood to the mix, and not long after, they began the slave trade, importing Africans to South America. Waves of immigrants and refugees followed: from China, from Laos, from India, from Haiti and beyond. But rather than staying isolated within their own cultures, these new Guyanese mixed, mingled, and intermarried, creating a rainbow of skin tones from palest ivory to richest chocolate, and every shade in between. 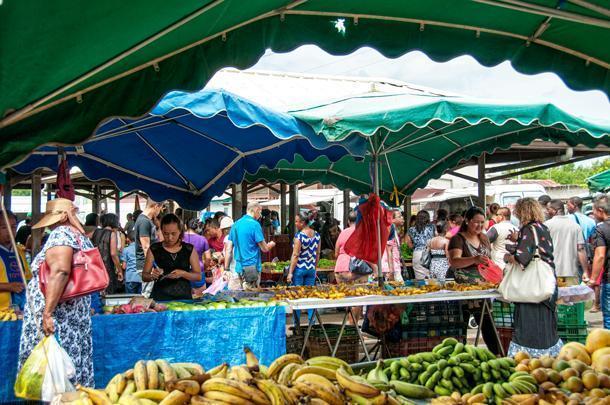 The market in Cayenne is a great place to people watch and experience Guyane’s cultural diversity.

In Guyane, anyone who’s ancestry doesn’t all stem from the same place, is known as Creole, while anyone from continental France is known as Metropolitan (which can be confusing because if you’re from the cities of Guyane, you could also be referred to as Metropolitan).

The Creole mixes result in some startlingly beautiful faces, with unexpected characteristics from skin-tone to eye-shape. These days, French Guiana is truly an experiment in racial diversity gone right.

As we also know from Belgium, when cultures mix and mingle, it does good things for the region’s cuisine and Guyane is no exception. Around the territory, you can find excellent examples of French and Asian cuisine, as well as the diverse and interesting Creole cooking. 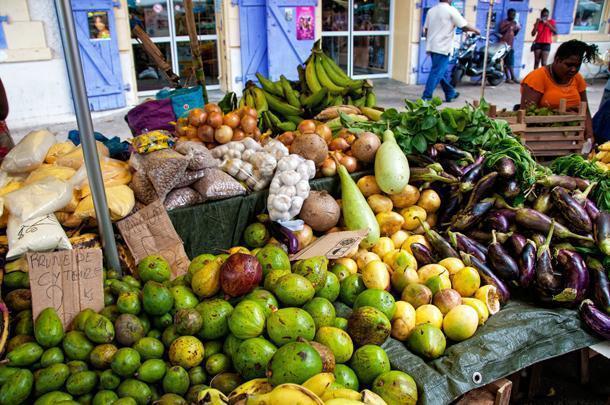 In addition to the mix of cultural influences, French Guiana’s cuisine also benefits from a wealth of fresh, local produce. When I visited in July, tropical fruit was at its peak of perfection and it was highlighted in dishes both sweet and savoury. Being a coastal region, Guyane also has an abundance of seafood, in addition to the wild game found in its forests. 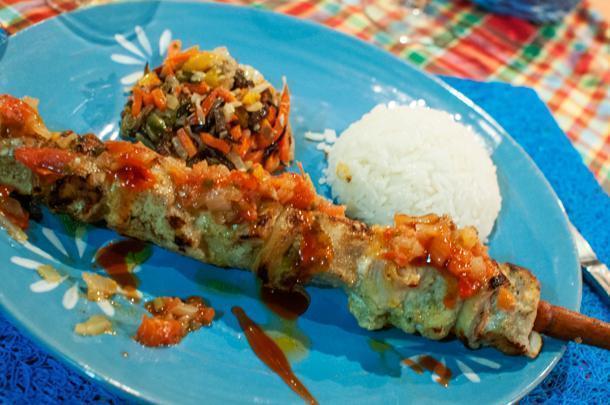 It won’t come as a surprise to our regular readers; I have a whole article in store to share the best of Guyane’s rich culinary delights and where to find them.

3. Abundance of Flora and Fauna

People aren’t the only diverse species to populate French Guiana. One of my biggest surprises was the richness of the flora and fauna of Guyane. The variety of animals is staggering, with many species being endemic – from large felines like jaguars and puma, to tiny rodents and more than 80 species of the magnificent blue Morpho butterfly. 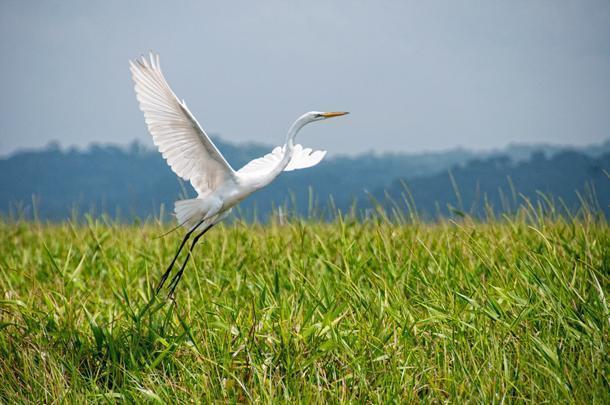 Bird-watchers will be in heaven in Guyane. Did you know there are 7 species of toucan in French Guiana? I didn’t, but I was lucky enough to see one of them in the wild and several others in the Cayenne Zoo. My day on the Marais de Kaw was filled with a riot of colour from the countless bird species we saw, including a number of varieties of Kingfisher. 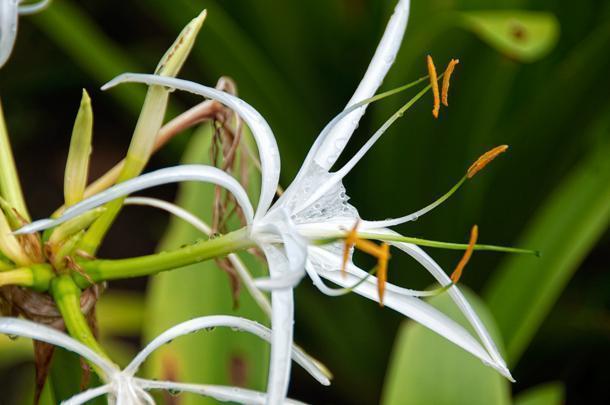 Guyane is also home to a staggering number of trees and plants: flashy orchids, giant ferns, stunning hardwoods, and vines thicker than a man’s leg. A walk in the Guyanese forest is filled with eye-opening surprises. (Just keep an eye out for the world’s largest spider and the world’s largest snake, both of whom call French Guiana home, as well).

4. Accessibility of the Amazon Forest

While French Guiana is home to Europe’s largest nature reserve, the Parc Amazonien de Guyane, even the unprotected areas of the forest are still technically Amazonian – and they are Right There, minutes from the city. You don’t have to trek for days on foot to get there (although I would love to trek deeper into the interior on my next visit to Guyane). 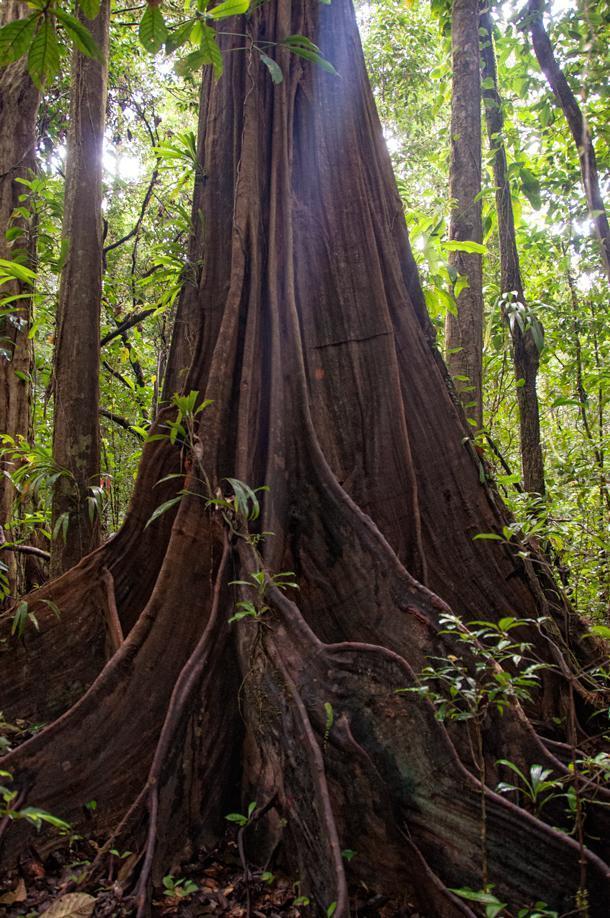 The forest is never far away and always magnificent

You can access the forest on foot, via a wealth of clearly marked trails, like the Sentier Botanique Trésor, which I walked. You can hire a boat (a traditional pirogue or something a bit more modern) to explore the forest from the water. You can even access some of the forest by car. We spotted monkeys and toucans from our rental car while travelling from town to town.

This accessibility to nature means you don’t have to be adventurous, or even all that fit, to experience exotic plants and wildlife, in their natural habitat. It’s the perfect escape to nature for all ages – from small children to the elderly.

As much as the cultural and bio-diversity of French Guiana impressed and surprised me, my biggest surprise was actually technological. The Guyanese Space Centre at Kourou is at the forefront of satellite technology. In fact, all European satellites are launched into space from Guyane and I was lucky enough to experience this first hand during my visit. (I’ll share the details in an upcoming article). 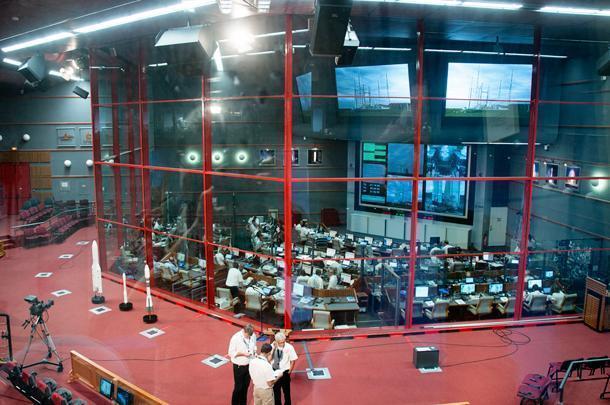 Just like the nature in Guyane, the Space Centre in incredibly open to the public. There are bus tours (in French but the possibility of other languages by advance request) of the facility where the entire process is explained. The general public can also apply (well in advance) to watch the rocket launch from the control centre, as I did, if space is available.

I couldn’t believe how open and accessible both the Centre Spatial Guyanais and the rocket launch itself were to the general public. This openness is something I found throughout the territory, particularly in my dealings with the Guyanese. This is an open, accessible, diverse and wonderful place and I’m excited to share more of my discoveries with you over the coming weeks.

Alison Cornford-Matheson
Alison Cornford-Matheson is a Canadian travel writer, author, and photographer. She is the founder of Cheeseweb.eu, a website dedicated to slow and sustainable travel, off-the-beaten-path destinations, and cultural awareness through travel. She and her husband, Andrew, are the founders of RockFort Media, committed to helping entrepreneurs tell their stories online. Alison has visited over 45 countries and, after living in Belgium for 11 years, now lives full-time in a Bigfoot motorhome named Yeti with Andrew and their well-travelled cat.
Latest posts by Alison Cornford-Matheson (see all)
Pin206
Share561
Tweet3
Flip
Email
Read more from this series...
Series: French Guiana