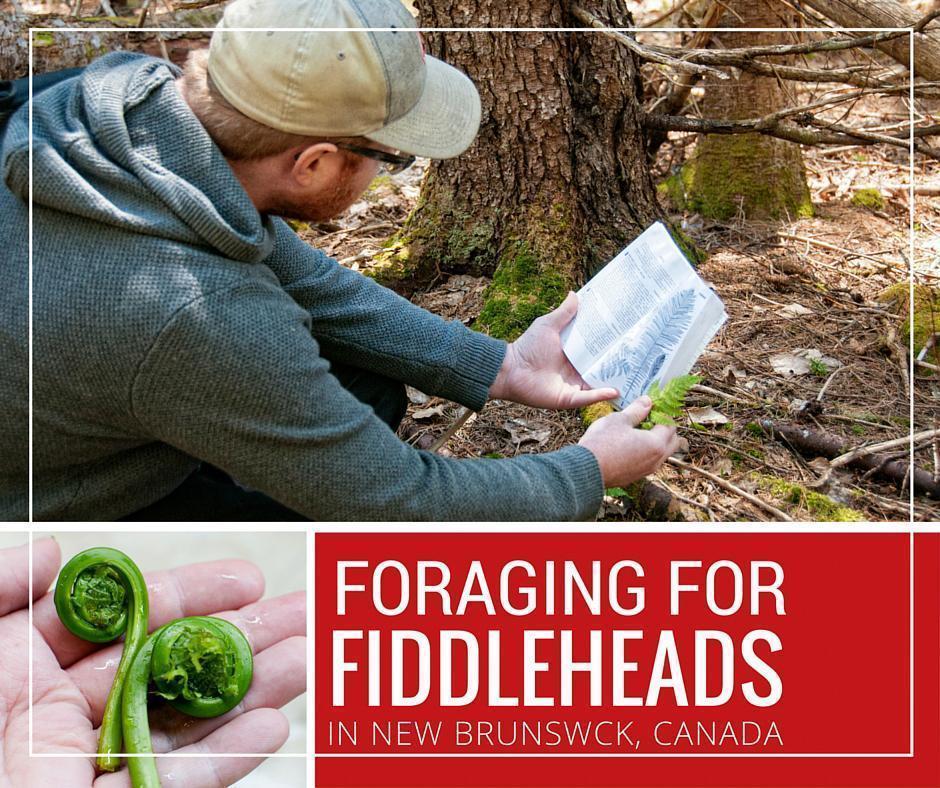 Foraging for Fiddleheads and Wild Food in New Brunswick, Canada

Fiddleheads are a locally foraged delicacy in New Brunswick, Canada. We head into the woods, with a local chef, to pick our own and learn what other wild foods we can eat.

Last summer we had an incredible experience in the wilds of Auvergne, France. We went searching for edible plants with an expert forager. We were amazed by the variety of wild food we found and it sparked our desire to learn more about eating from the land.

The truth is, Auvergne wasn’t my first exposure to foraging. I grew up searching for wild foods with my mother and grandmother in the fields and forests of New Brunswick, Canada; I just didn’t realise it at the time. On long summer days, we would head out on the hunt for wild strawberries, blackberries, raspberries, and blueberries – all free for the picking if you knew where to look and so much tastier than their cultivated cousins.

There was one wild delicacy we went hunting for a few weeks, as soon as the snow melted. It is a well-known sign of spring to New Brunswickers and either loved or loathed as a food – the fiddlehead.

What is a Fiddlehead?

Fiddleheads are the young shoots of a particular type of fern, in NB they are typically ostrich ferns, but other varieties are eaten elsewhere. The fern’s leaves are still tightly coiled into a spiral and resemble the top of a stringed instrument, hence the name fiddlehead. 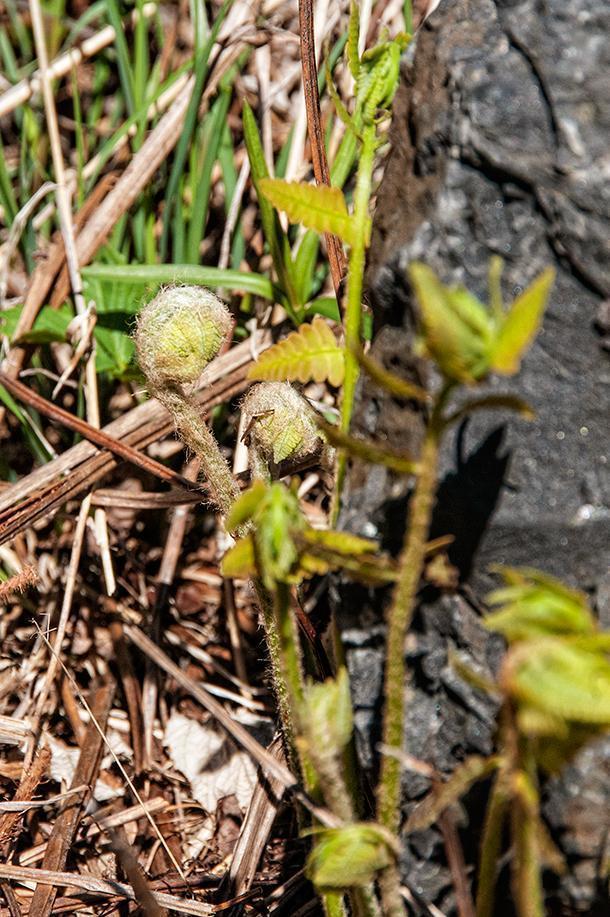 As a child, I hated fiddleheads (and most other green vegetables), but after I grew up and moved away from New Brunswick, it became one of the foods I craved. I hadn’t gotten my hands on fiddleheads throughout our time in Europe, as our visits home were always too late into the summer. As my first spring back in Atlantic Canada, I couldn’t wait to get my fill of this locally foraged delicacy.

Foraging for Wild Food in NB

Beyond fiddleheads and berries, I had no idea what edibles could be found in the forests of New Brunswick, and I was eager to learn more. When our contact at Fredericton Tourism told us about a chef who uses locally sourced ingredients, including foraged foods, we were excited to find out more. Chef Matt MacKenzie and food and beverage manager Chris Cornhill from the Crowne Plaza Hotel offered to take Andrew and me foraging near Fredericton, and we couldn’t wait to see what we would find.

Dedicated foragers won’t reveal their favourite locations to anyone but we were headed to a public, if little-known place, beyond Fredericton. The site, a former internment camp from WWII, was a fascinating discovery in itself. But today we weren’t after a history lesson, as we followed Chef Matt into the woods. 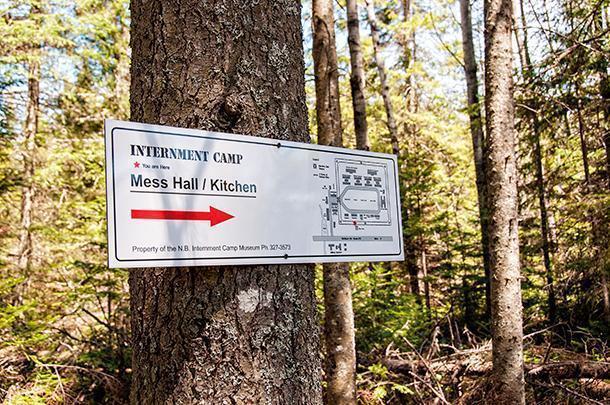 Ironically, I was the only native New Brunswicker in the group. Like Andrew, Chef Matt hails from Nova Scotia, Cape Breton Island to be exact, and although Chris has lived in NB for many years, his Scottish accent is a dead giveaway to his native land.

Fiddleheads were our ultimate goal, but I was curious to see what else we could eat in the woods. 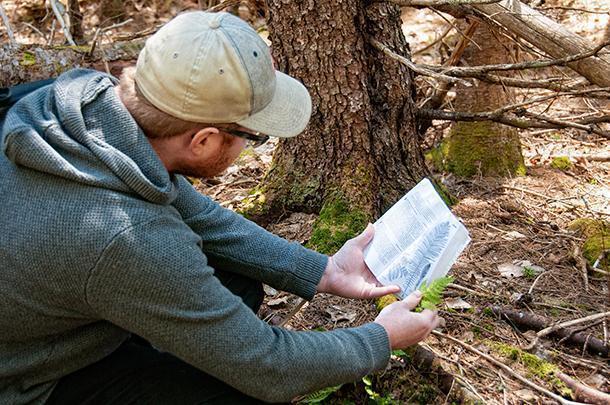 Chef Matt is an avid woodsman and grew up hunting and fishing in Cape Breton. He is dedicated to knowing where the food in his restaurants comes from (more on this next week) and is passionate about locally sourced ingredients. Armed with a battered and well-loved Peterson Field Guide to Edible Plants, Chef Matt stopped before something we knew well, young spruce trees. As he gathered some of the tips he explained, “There’s so much you can do with spruce. You can smoke things with it, steep it into teas, or just crush it and eat it.” 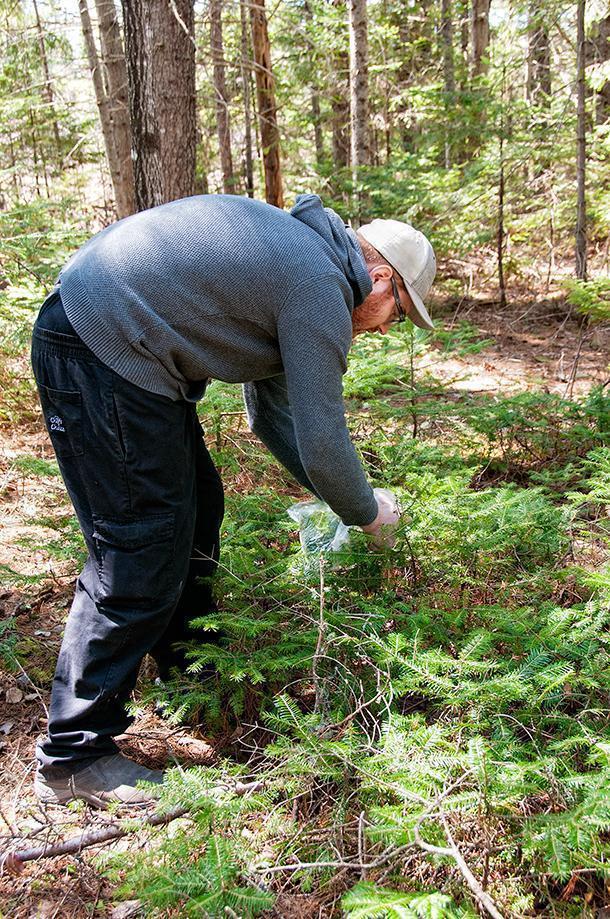 Chef Matt gathers young spruce to use in our dishes

Chef Matt pointed to red clover and explained both the leaves and flowers were edible and an excellent addition to salads. Later he told us how to make an edible paste from the substance under birch bark. “I don’t like to do it because it kills the tree but, if you’re stranded in the woods, it is edible,” he told me. 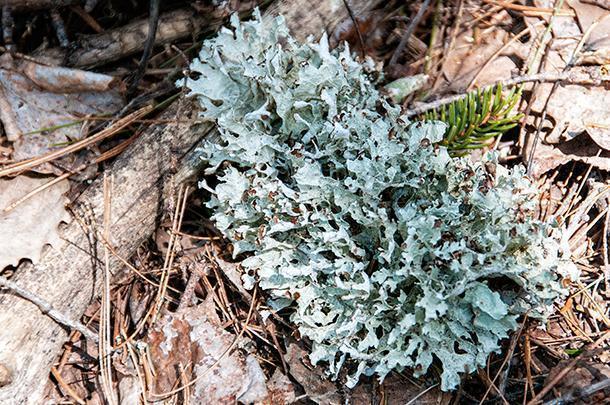 There are thousands of plants in the New Brunswick forest, but how many are safe to eat? 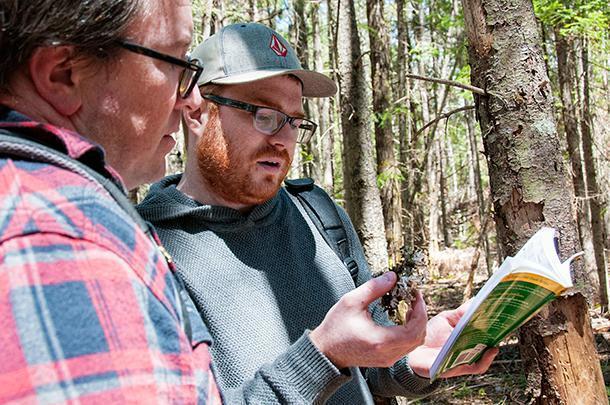 Is it edible? Andrew and Matt consult the guide book

We found some interesting mosses and mushrooms, but nothing we could guarantee was edible. The fiddleheads remained elusive.

We moved on to a few other locations and found a variety of ferns, none of them fiddleheads. Reading through the field guide, you quickly realise the importance of foraging with someone who knows what they are doing as fiddleheads have several poisonous cousins. (If the fern has any red colouration on the stalk, leave it well alone.) 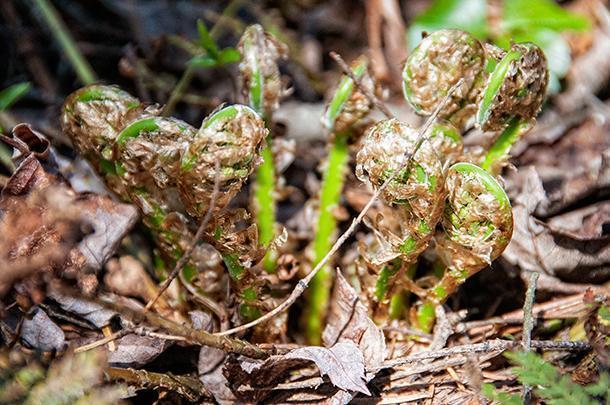 In the end, we found our fiddleheads. I’m afraid I can’t tell you where; forager’s secret and all. 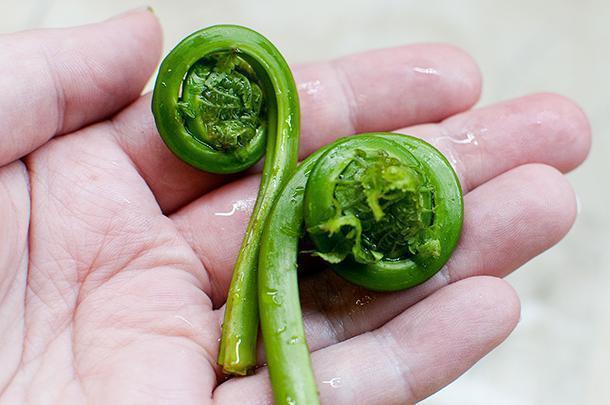 What I will say is later that evening, Chef Matt cooked a special meal, just for us, using the wild foods we found in the forest; the spruce, the clover, and yes, the fiddleheads. Read all about our meal and the incredible slow food restaurants at Fredericton’s Crowne Plaza.

If you want to get your hands on your own fiddleheads, you don’t have to venture into the woods (but if you can, it’s a lot of fun). Stop by any New Brunswick farmer’s market, like the Boyce Farmers’ Market in Fredericton or the Saint John City Market, and you’ll find fresh fiddleheads – if you are quick. The season only lasts a few short weeks in early spring. The tip is: When the dandelions first appear, fiddleheads are near.

Fredericton Tourism’s blog has a great article on how to forage for fiddleheads, and we recommend using a good field guide if you are heading into the woods on your own. The following are a few options:

What’s your favourite wild food? Share your foraging secrets in the comments below. 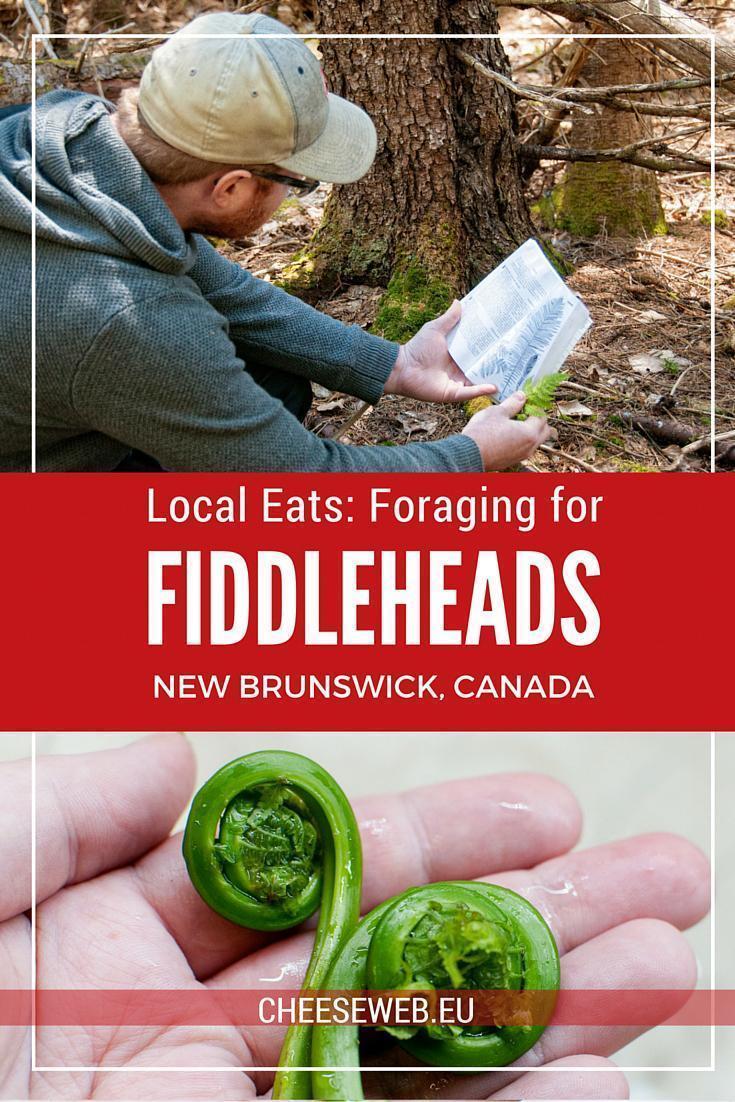