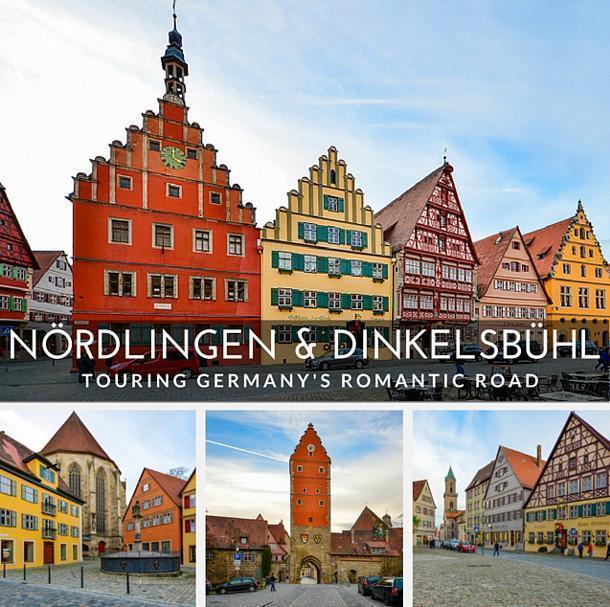 This entry is part 2 of 2 in the series Touring Germany's Romantic Road.
THIS POST MAY CONTAIN COMPENSATED LINKS. FIND MORE INFO IN MY DISCLAIMER.

Nördlingen, a town in the Donau-Ries district, in Bavaria, Germany, was first mentioned in recorded history in 898. It’s one of three medieval walled towns on the Romantic Road, the other two being Rothenburg ob der Tauber and Dinkelsbühl.

What is special about Nördlingen is it’s built entirely inside a massive crater, created some 14 million years ago when a meteorite struck the Earth. How often do you get to visit such a place? Never right? I felt the same way. What is even more amazing is, up until 1960, people had no idea their town was built inside a crater, today called the Nördlinger-Ries, or the Ries Crater.

An aerial view of the Nordlingen Crater (via wiki)

The Ries Crater was always believed to be a shallow depression. But two American scientists, Eugene Shoemaker (of Comet Shoemaker-Levy 9) and Edward Chao, proved the depression was, in fact, caused by a meteorite impact. While visiting a church in the town of Nördlingen, Shoemaker reportedly scratched its walls to see what it was made of and discovered it was shocked quartz, a type of rock that can only be formed by the shock pressures of a meteorite impact. In addition, the rocks hit by the meteorite contained graphite, which was turned into diamonds by the immense pressure from the impact explosion. These diamonds are microscopic and, therefore, have no value as gemstones. However, there are trillions of them, having an estimated total mass of more than seventy thousand tons. So the town not only sits inside a crater but it’s also built of diamonds. Home sweet home, indeed.

But don’t visit Nördlingen purely for its geological uniqueness. The town abounds with gorgeous architecture and is dominated by Saint George’s Church, a Gothic structure with a 90 m steeple.

Not only do I recommend visiting the church, but I also urge you to climb the 350 steps, for a bird’s eye view of the town. From the top of the church, you can see the entire walled town, as well as the wall itself.

One word of advice; visit the tower only if you are not hurting for time. This was my first time visiting a church tower that was extremely narrow. Basically, only one line of people can fit at a time and nobody can pass you. You get up close and personal with the other visitors.

At the time of our visit, this created a bit of conflict, since some people were in a hurry to get back down. Some other enthusiastic visitors, taking lots of photos, held up the line and passing them was impossible. As long as you are comfortable with this, the visit will be a pleasure.  You do not pay to visit the tower inside the church, but almost at the top. There is gentleman collecting the fee, accompanied by his very laid back cat, Wendelstein.

Besides visiting Saint George’s, I recommend just walking around town, to admire the many half-timber (fachwerk) houses, and get lost in the narrow streets. It will be an unforgettable experience on the Romantic Road.

The pretty center of Nordlingen on Germany’s Romantic Road

Wander through the pretty back streets of Nordlingen, Germany

After Rothenburg ob der Tauber, Dinkelsbühl was my favorite of the three walled towns. The colorful architecture and the solitude of the place were simply enchanting.

The colourful architecture of Dinkelsbühl on Germany’s Romantic Road

Dinkelsbühl remained untouched by the Second World War, which means it remains as it was in the Middle Ages, when it was created (sometime before the year 1083). The film, The Wonderful World of the Brothers Grimm, was filmed on location in Dinkelsbühl, just like it was in Rothenburg ob der Tauber. It’s only natural fantasy films would be filmed in fantasy towns.

We visited the town just a couple of weeks ago. Although I have not experienced it in summer, I can tell you, visiting in winter will grant you the opportunity to visit with no tourists around. We walked up and down for hours, without having to bump into anybody. It was a very pleasant experience.

St. George’s Minster, a late 15th-century masterpiece, in the Gothic style, dominates the town. Visiting the interior was interesting. The lights were off, with the exception of the front, and preparations were being made for a concert. While everything was being set up, the workers were playing techno music. It was the first time ever I heard this style of music in a medieval Gothic church – It was very surreal.

Back of St. George’s Minster in Dinkelsbuhl, Germany

My favorite part of Dinkelsbühl was the Weinmarkt, or Wine Market. Magnificent gabled buildings, dating from around 1600, line the Weinmarkt. This is the promenade of the city, where numerous restaurants and cafés invite you in for a nice meal and refreshments.  The square is a stage and backdrop for many festivals and celebrations. The elongated building called Schranne, once the Grain Exchange, is now a city hall. On the Deutsche Haus, next to the Schranne, apart from its beautiful late Renaissance façade, you will observe Bacchus, the god of wine and frivolity, sitting over the openings for the hoists.

We went home wanting to revisit Dinkelsbühl. So far, the entire section of the Romantic Road that we visited had that effect on us.

Adriana
I live in Germany with my husband and two children. I have a big passion for travel and photography. I am most happy when I travel, when I discover new cultures, see new places and try new foods.We have travelled to more than forty countries and almost two hundred cities. See some of the photos taken during our adventures at Life in A Suitcase and follow on Google+.
Latest posts by Adriana (see all)
Pin1.5K
Share318
Tweet
Flip
Email
Read more from this series...
Series: Touring Germany's Romantic Road