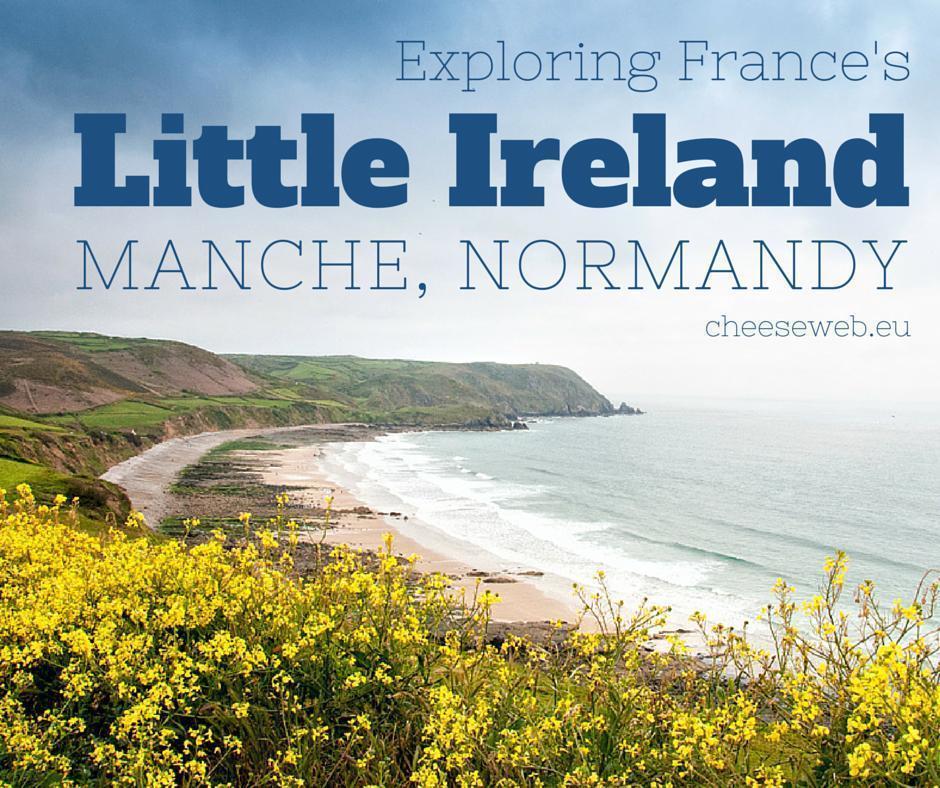 Flipping through the tourism documentation for Normandy, my eyes paused on a photo of dramatic coastal cliffs and rolling green pastures, captioned ‘Little Ireland.’ We had loved our driving tour of Ireland a few years ago, and an Irish-like landscape in France sounded too good to be true.

Besides the lure of beautiful vistas and tiny winding roads, the area had something to tempt each of us: a number of WWII sites for Andrew and the promise of seafood and salty air for me. Although it was out of our way, we decided to alter our plans (the first of many such changes on our motorhome adventure), and tour the coast of Normandy’s Manche department.

After spending several days at a terrible campground, struggling to find internet and generally feeling the strain of our newly nomadic life, we decided to regroup and do the kind of things we enjoy doing, rather than racing to the tourist hot-spots. As both of us find our zen on rugged salty coastlines, it was the perfect plan.

This would not be our first visit to the department. Like most visitors, we first came to Manche, several years ago, to set eyes on the famous Mont-St-Michel. If you’ve never seen this remarkable UNESCO site in Normandy, there’s no better time to visit. Last year, a new bridge was unveiled, which allows water to pass through. This, in combination with a new dam, has returned Mont-St-Michel to the island it once was.

But, our sights were set on the northern coast of Manche, and destinations off the well-worn tourist trail.

Our first stop, after crossing the Marais Cotentin, the marsh that separates Manche from Calvados, was the Utah Beach Museum, which turned out to be Andrew’s favourite WWII site of our trip.

From there we carried on up the coast through small fishing villages, to the town of Lestre. While our camping spot for the night may not have been the most atmospheric, we were pretty excited to camp in this particular parking lot. Part of the France Passion program, Domaine Ostreicole Sebastien Lejeune, allows customers in motorhomes to camp overnight for free. 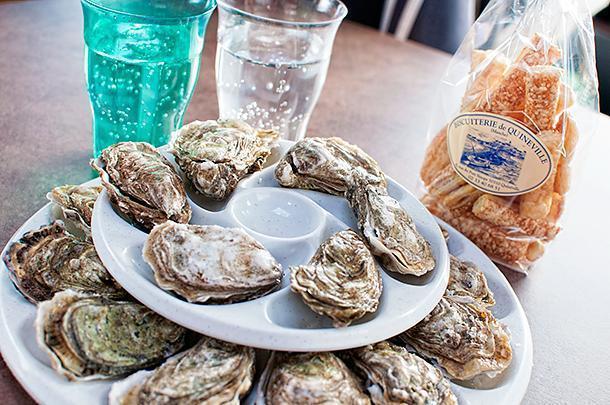 Buying oysters to justify our overnight stay was no hardship – especially considering we feasted on 18 huge oysters for only 9 euro. We didn’t even have to shuck them. 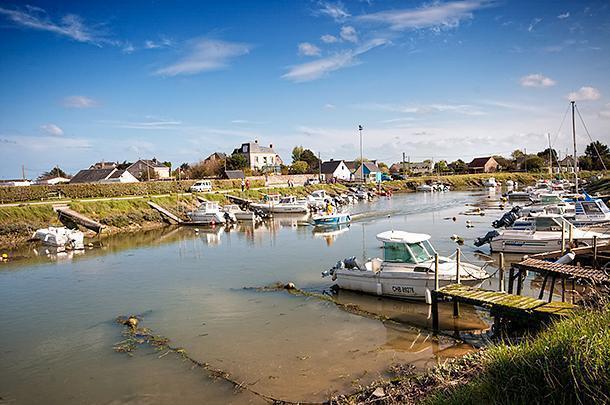 The pretty village port of Quineville

After our feast, we strolled up the beach to the pretty harbour town of Quinéville. Watching the fishing boats coming and going reminded us of home on Canada’s Atlantic coast. The town is also home to a buiscuiterie, filled with temping treats both sweet and savory. 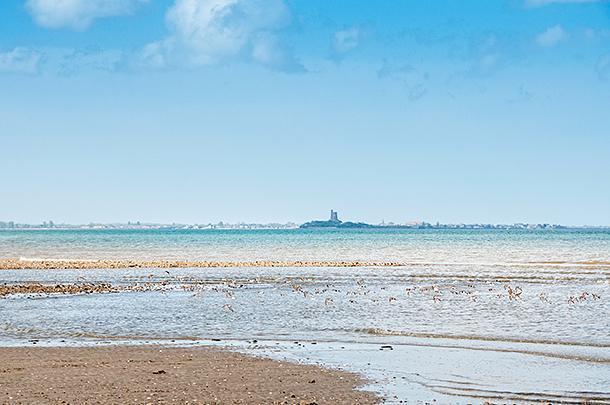 Sea-birds soar along the beach as we spy tomorrow’s destination in the distance.

The following morning, we made a quick stop at St. Vaast-la-Hougue to admire the impressive Fort de la Hougue, Manche’s other UNESCO site. The fort and the tower of Tatihou were built by Sébastien le Prestre de Vauban, the architect of Louis XIV. Vauban’s network of fortifications were added to the World Heritage list in 2008. We had a quick walk around the fort, in the chilly morning fog, before continuing north to Barfleur. 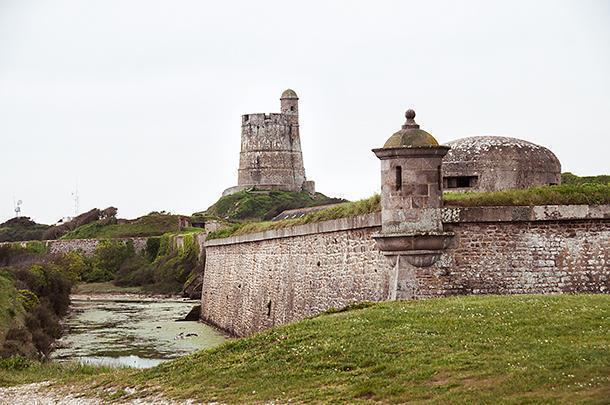 One of Vauban’s UNESCO designated fortifications

Barfleur is one of France’s Plus Beaux Villages and with its picturesque harbour filled with colourful fishing boats, we could see why. Barfleur was an important port to England in the middle ages and it remains important to the fishing industry. 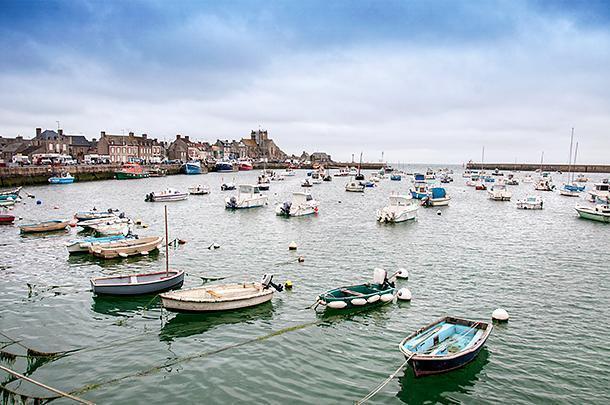 Barfleur is a Plus Beau Village even with cloudy skies

We ducked inside the Saint-Nicolas church, a squat, stone structure, clinging to the edge of the village. The small church is dark, cozy and, for me, more inviting than the large, dramatic cathedrals. Inside you can almost feel how many fishermen’s wives sat here over the centuries, praying for the safe return of their husbands and sons, from the cruel sea. 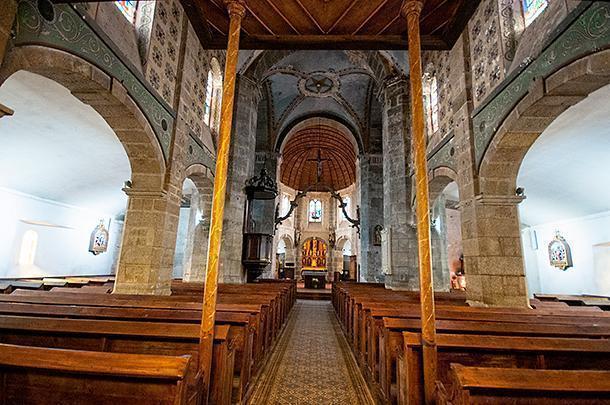 The cosy church is painted with colourful frescoes

Along the dock, the modern-day fishermen’s wives set up stalls selling their husbands’ catch. The shellfish, crabs, and lobsters had just been pulled from the ocean and the salty smell was irresistible. 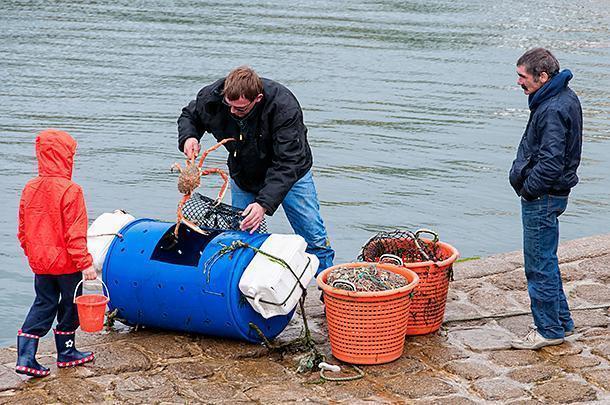 Fishermen land all manner of shellfish in Barfleur

While we couldn’t justify shelling out for a lobster, the crabs were more affordable. While we were familiar with the smoothed shelled crab (or tourteau in French) the spiky araignée, or spider crab, at €2.30, was temptingly cheap. Armed with a wriggling, long-legged monster in a plastic bag, we jumped back in Amelia and set off for a suitable spot to cook our prize. 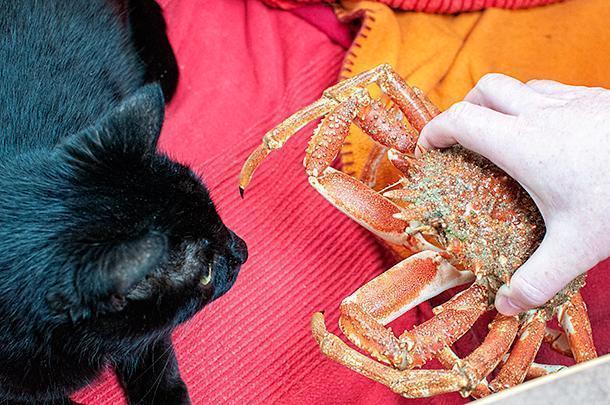 Buddy meets our lunch before ‘Spike’ heads to the hottub

The drive from Manche’s east coast, to its westernmost tip took under an hour. We found an Aire, a parking place for motorhomes, with a stunning view of the Gros du Raz lighthouse and put a pot of water on to boil. 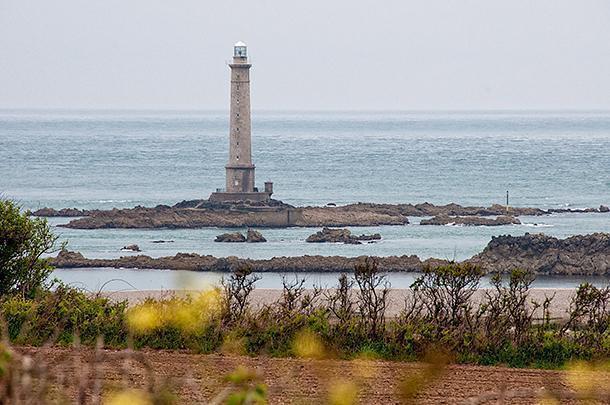 Not a bad view from our picnic spot

Although we had no experience cooking crab, we assumed it would be much the same as lobster (which as Eastern Canadians we are definitely familiar with) and popped our spiky friend in the pot. Although picking the meat from a spider crab is tedious (talk about Slow Food!), it was one of the best meals of our trip.

After lunch, it was time to experience what drew us to Manche: Little Ireland. From Goury, we set off on tiny coastal roads, to the Nez de Jobourg, yet another lighthouse along this treacherous coastline. 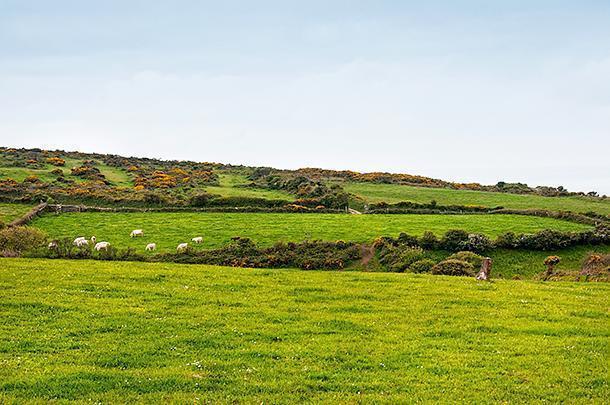 This corner of Manche certainly does look like ‘Little Ireland’

Between Goury and Nez de Jobourg the tiny roads twist along the Baie d’Ecalgraine. Dotted with sheep and divided by hedgerows and stone walls, the farmland has a decidedly Irish feel. We both decided if we were dropped here blindfolded, we would guess we were on the Ring of Kerry. 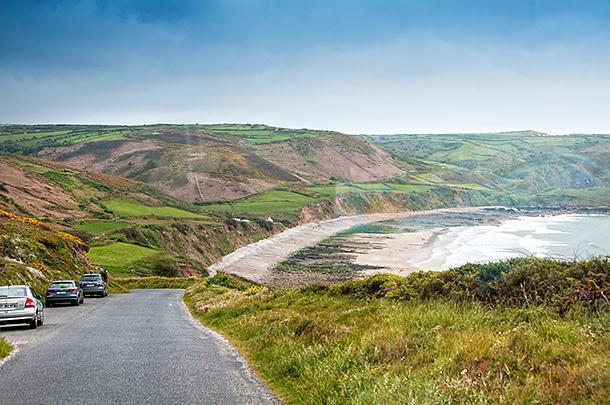 The view from our windscreen is decidedly Irish-looking

The Nez de Jobourg is a popular destination. Hikers clamber the cliffs with their walking sticks and we wished we had more time to explore the numerous trails on foot. 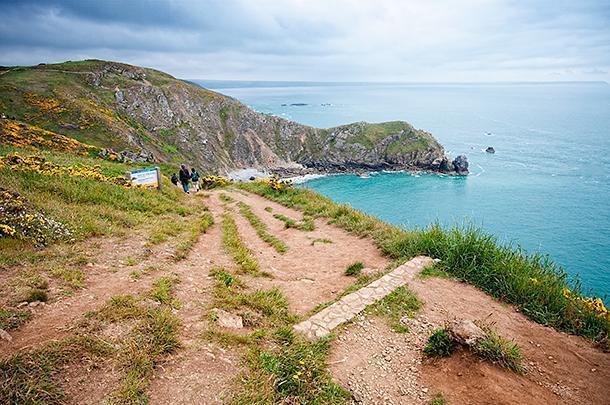 In fact we wished for more time in Manche in general. But after our excursion in Little Ireland, we needed to head inland before beginning our overland trek to the Centre region.

If you’re planning a trip to Normandy this year, whether it is to discover Mont-St.-Michel, the D-Day Beaches, or to enjoy the amazing cheese, consider adding a tour of the Manche department to your itinerary. It’s a beautiful coastal escape, with great seafood, lovely villages, and plenty of photo-worthy landscapes.