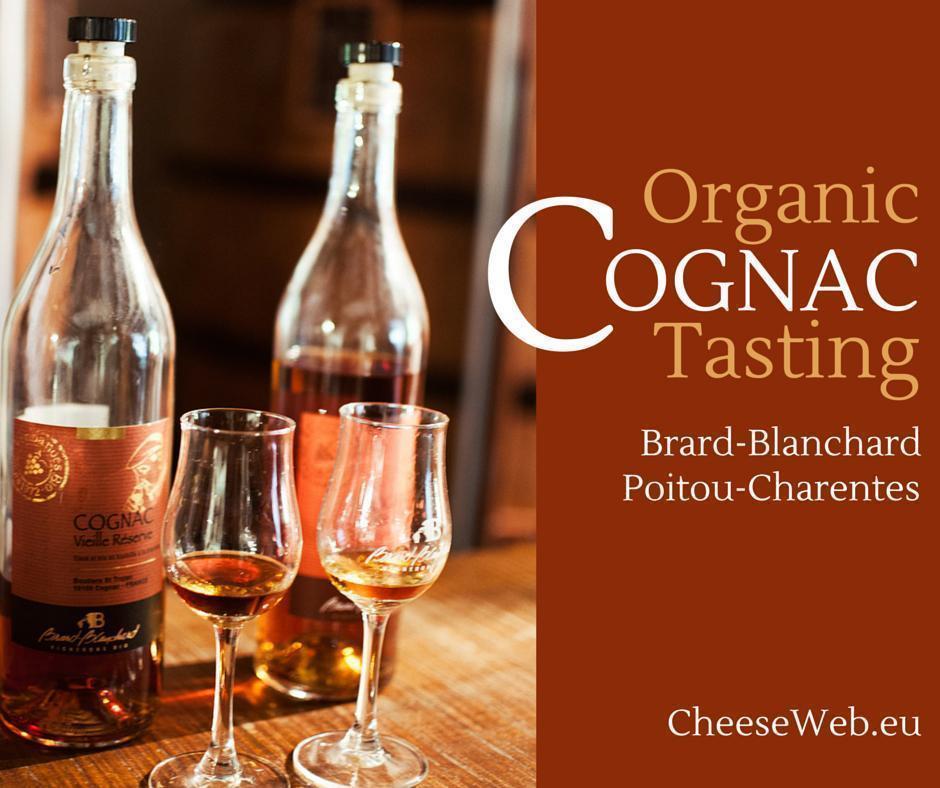 This entry is part [part not set] of 6 in the series CheeseWeb Drinks (Responsibly).
THIS POST MAY CONTAIN COMPENSATED LINKS. FIND MORE INFO IN MY DISCLAIMER.

I don’t know much about Cognac, but I know I like it. So I was thrilled to visit organic Cognac producer, Brard-Blanchard, during our recent visit to Poitou-Charentes, France.

What I know about Cognac you could fit onto a Cognac label. I know it is distilled, made from grapes, comes from France, and I enjoy drinking it. So when we were planning our visit to the region of Poitou-Charentes, a tour of a Cognac distillery was at the top of my list. When we were able to secure a visit to the Brard-Blanchard domain, I was ecstatic. To top it off, we were visiting on my birthday – Perfect timing!

We pulled into the Brard-Blanchard estate on a Friday morning to get a tour of the vineyard and the distillery.

The map of Cognac hangs proudly in the distillery

The Brard-Blanchard domain has been an organic operation since 1972 making them quite unique. It is amazing to think they were one of the pioneers; before anyone even knew what organic agriculture was. Jacques Brard Blanchard, father of the current owner, Sophie, made the decision to become organic, because the chemical sprays were making him sick. Forty-plus years later, his daughter continues to maintain the vineyard using organic principals.

Great Cognac starts with the vineyards and the quality of the grapes. Thus, our tour began with a short walk through the vines. Being organic, the Brard-Blanchard vineyards may look a bit overgrown. Weeds, the bane of most farmers, are seen as an important part of the eco-system, providing habitat for good insects, which in turn help maintain the health of the vines.

Great Cognac begins in the vinyard

Even though it is early in the season, the vines are already starting to climb up the trellis. At this time of the year, there is plenty of manual work in the vineyard: tying the vines, adjusting the trellises, weeding, removing shoots, and more.

It is easy to see the passion and attention to detail at Brard-Blanchard. They are so particular about creating a high quality product they harvest most of their grapes by hand. Machine harvesting is fast but it lacks control. Harvesting by hand ensures the grapes are picked when they are at their best.

The grapes they do harvest by machine are found on the edge of the property. Although Brard-Blanchard is organic, many of their neighbours are not, which contaminates the Brard-Blanchard grapes. To minimize the impact on their own product, grapes harvested from the edges are sold to one of the larger Cognac houses.

From the vineyard, we stepped into the distilling room, featuring shiny copper equipment installed in 1986. The only upgrade since 1986 was adding a gas burner to replace the wood stove.

Not much has changed in this distillery over the years

We were told that each distillation has three parts: the head, the heart, and the tail. Determining the point at which each of these parts appears in a distillation is more an art than a science. Only the ‘heart’ of the distillation is then distilled again and the heart of the second distillation is used to make cognac. The head and tail from both distillations are stored for use in other products or as part of the next distillation. Nothing goes to waste.

Where the magic happens – the Chai

Once the distillation is complete, the spirit is transferred to French Oak barrels in the Chai (pronounced ‘shay’). In the Brard-Blanchard Chai, there are dozens of barrels of Cognac (and Pineau) aging. Stepping into their aging room, I was overwhelmed with the heady scent of Cognac and earth. Built almost underground, to keep out the light and maintain a consistent temperature, the room is cool compared to the blazing sun in the courtyard outside. The ceiling is draped in cobwebs, some probably older than I am. But spiders are good, as they help keep away the bugs that eat oak. Each barrel is also clad in strips of soft wood to attract bugs that might otherwise eat the oak. The aging room is where the magic happens.

Quietly ageing for many year – good Cognac is worth the wait.

Cognac is typically a blend of various years. The standard designations for Cognac – VS, VSOP, and XO – refers to the youngest Cognac in the blend (5, 10, or 15 years, respectively). Every new distillation starts out in fresh oak barrels to take on colour and flavour. After a year, the Cognac is transferred to an older barrel and aged. How long a Cognac is aged is a matter of preference. At Brard-Blanchard, they believe the older the better. The youngest Cognac they sell is aged 2.5 years which they suggest as an aperitif (maybe mixed with tonic). The next in line is a ‘Selection’ which is at least 10 years old, a VSOP which is at least 15 years old, a ‘Vieille Reserve’ which is at least 25 years old, and an XO which is from 1986 (it was such a great year, they didn’t need to blend it). This differs greatly from the standard definitions of VS, VSOP, and XO.

A variety of Brard-Blanchard’s Cognacs

Having learned all about the vines, the distillation, and the aging, the only thing left was to taste them. This is my kind of lunch! (Good thing we had a bite to eat before we started the visit.)

We began with the VSOP (a blend with the youngest vintage being at least 15 years old) which tasted of pears, apricots, and a hint of vanilla. We tried the Vieille Reserve (vintages at least 25 years old) with flavours of rich caramel, liquorice, cinnamon, and hazelnut, followed by the XO with even stronger flavours of hazelnut, coffee, and vanilla. We finished by trying their Follie Blanche, a ‘white’ cognac. Produced without barrel aging, the Follie Blanche is much more like an eau de vie. It has definite fruity characteristics, but it lacks the mellowness brought out by the oak barrels. In the end my favourite was the Vieille Reserve so we bought a bottle to take with us (Cost: €62.50).

Besides Cognac, Brard-Blanchard also produces a few wines, Pineau des Charentes, and pure grape juice. Pineau is an aperitif wine made by blending fresh grape juice with Cognac eau-de-vie. The result is then aged for up at least 14 months for Red Pineau and 18 months for White Pineau, including at least 8 months in oak barrels. During our visit we also tried the red and white Pineaus produced by Brard-Blanchard. They were both delicious but, as often happens, Alison liked one (the red) and I liked the other (the white). This surprised us both because we would normally be the opposite.

Pineau des Charentes is the other local tipple in Poitou-Charents

Our visit to Brard-Blanchard was a great way to celebrate my birthday. I loved learning about the process, the organic benefits, and seeing how it all worked. Harvesting and distilling the Cognac takes two weeks, which means the estate is an absolute madhouse for those 14 days. But it is worth it, as the fruits of their labour are delicious! If you want to visit, they are open to visitors Monday to Friday, 10h-12h and 14h-18h, and Saturdays from 10h-12h.

Do you like Cognac? What’s your favourite vintage? I’d love to know more about the small producers and how they do things differently.

We’d like to thank our wonderful hosts at Domaine Brard Blanchard for a lovely visit, and the Région Poitou-Charentes Tourism office for hosting us in the area. As always, all opinions are our own.

Andrew
Andrew is our resident tech-geek and is normally found lurking behind the scenes on CheeseWeb doing things with code that Alison finds mysterious. He comes out of hiding occasionally to write about history and technology. He loves castles, driving on narrow, twisty mountain roads and relaxing with a glass of peaty Scotch. Follow Andrew on Google+
Latest posts by Andrew (see all)
Pin3
Share56
Tweet4
Flip
Email
Read more from this series...
Series: CheeseWeb Drinks (Responsibly)