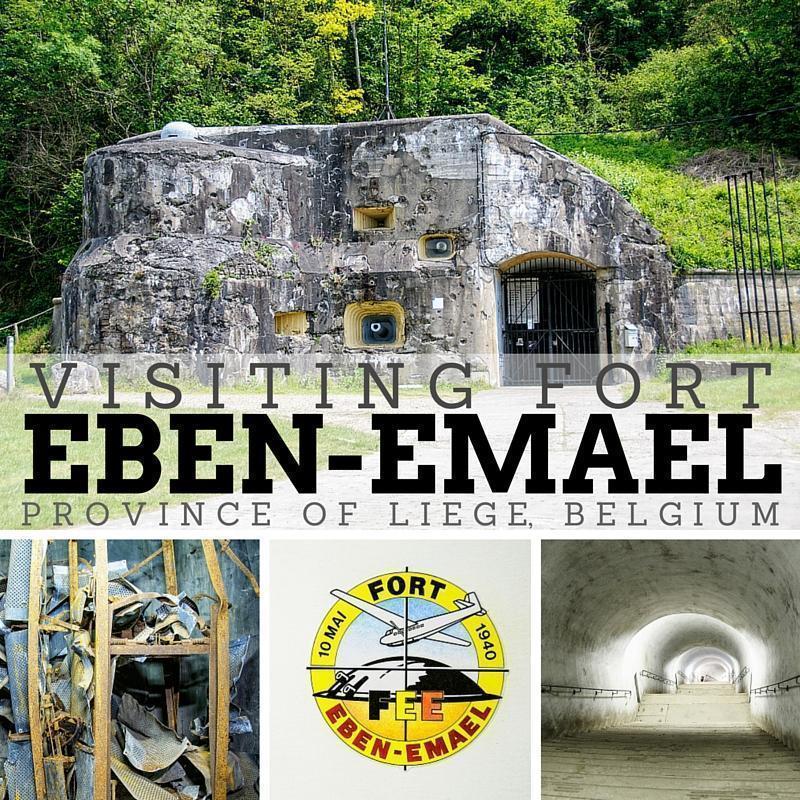 This entry is part 9 of 10 in the series Memorial Tourism.
THIS POST MAY CONTAIN COMPENSATED LINKS. FIND MORE INFO IN MY DISCLAIMER.

Fort Eben-Emael, near Liège, was the largest and strongest fort in the world, in 1940. Even so, it surrendered a day after Germany invaded Belgium. We visited to learn why.

In the 1930s, as Europe headed towards war again, Belgium built a line of new defensive forts, to the east of Liège. The new forts: Eben-Emael, Aubin-Neufchâteau, Battice, and Tancrémont,  became the new outer defences of Liège and were built closer to Germany than the forts from World War I. Fort de Barchon and the older Liège forts became a secondary line of defence, filling the gaps between the big new forts.

When Fort Eben-Emael was completed, in 1935, it was considered the strongest fort in Europe. With 4km of tunnels inside, Eben-Emael was much larger than any of the forts from the First World War.   The roof of the fort is so big, it was (and still is) used to grow crops. Fort Eben-Emael, the most heavily armed of the forts, was built alongside the Albert Canal providing a sheer drop on the eastern side. It is a formidable structure.

Adolf Hitler is credited with coming up with the plan for capturing the fort, using gliders and a new, top-secret explosive, called a shaped (or ‘hollow’) charge. The German units started practicing, six months before the attack, using captured Czechoslovakian border fortifications. Their mission (and the shaped charge) was so top-secret, the German soldiers involved did not know their target and were kept separate from anyone else, including family, until well after the attack.

When I read about the fort, I found it hard to imagine gliders being able to land on the roof. I just couldn’t conceive of the scale. Visiting the older WWI forts didn’t prepare me either. The old forts had enough space to play a football match, but not enough to land a glider.

From the outside, it’s hard to imagine how large Fort Eben-Emael actually is.

Arriving at the Fort, our guide met us at the gate, which felt like the back door. Other than the concrete blockhouse and entrance gate, there was little evidence of the massive fort. Like the older forts of Liège, nature had returned with vigor and the sides of the fort are covered in trees. I still couldn’t see the size of this underground bunker.

Walking through the entrance, we crossed through the inner zone of defence, including a bridge over a three-metre pit, a machine gun position, and heavy gates. Once past those defences, we entered a long corridor, which veered left after about 100 metres. Our guide explained this is the rear area of the fort and showed us where six diesel engines provided the electricity for the facility. The white painted corridor had high ceilings and felt bright and spacious. I’m sure it didn’t feel that way when the lights went out.

Our guide took us deeper into the fort and, after 200 metres, we arrived at a junction. In front of us was a full-size example of the type of glider used by the Germans, minus its wings. There were about nine men in each one, seated in a single narrow line, so the gliders weren’t huge. In fact, it was so tight; it must have felt incredibly claustrophobic for men in full gear.

To the right and left of the junction, were offices, a canteen, and barracks for the soldiers. The Association Fort d’Eben-Emael, which manages the fort, has set up some of the rooms to show what they might have looked like during the war. We made a quick visit to each and then climbed a wide set of stairs to the next level.

It turns out, there are three main levels to the fort. The ground level, where we entered, was primarily the living and administrative area. The second level acted as the connector between the guns and observation positions. The third level was where the gun crews worked. However, to move from one gun to another, a soldier would have to descend to the second level, run through the corridors to the other gun’s stairs and then climb back up.

We walked down one of the main corridors, on the second floor, for a long time. The corridor was long, straight, and seemingly endless. I was starting to get that the impression this building was much larger than I thought. Finally, we arrived at the entrance to one of the main 75mm gun emplacements.

Fort Eben-Emael’s primary purpose was to prevent the Germans passing North, via Maastricht or South, via Visé. The major gun emplacements were therefore known as Maastricht I and II and Visé I and II, based on the direction they faced. Since we were on the second floor and the gun platform was on the third, we had around 100 stairs to climb. There was an elevator, but it was built for lifting ammunition to the guns (and was no longer operational anyway).

The guns have no visibility to the outside whatsoever

Upon arriving at the top, and catching our breath, our guide showed us how the guns were operated. He pointed out that the gun crew had no visibility outside the bunker. Target coordinates were provided, via telephone, to the gun crew from special observation points. The crew positioned the gun, loaded it, and fired. Adjustments were called in and so on.

We descended back to the second level and walked to the lower level of another gun emplacement. Here, the German soldiers, using their top-secret shaped charge, gained access to the fort. The principle of a shaped charge is to focus the force of an explosion in one direction. The Germans attached one of these to the outside of a gun embrasure, blowing a hole big enough to enter the fort. The Belgian defenders, who survived the explosion, descended the stairs and barricaded the door.

The barricade consisted of two heavy steel doors, with heavy steel bars dropped into slots behind each door, and a lot of sandbags between the doors. It sounds makeshift, but it was part of the fort’s design. The architects had foreseen a situation in which the guns would be lost and the fort would neeed to be barricaded.

The Germans were not fazed by the barricade. They installed another of their shaped charges, exited the gun emplacement, and detonated it. The resulting explosion was massive and demonstrated the power of the shaped charge. Even today, the scars are still visible. The heavy steel doors and bars were blown outwards, crashing against the wall of the corridor. The inside of the room blackened from the heat. The metal staircase, the only way up and down from the guns, collapsed to the bottom in a ragged heap of twisted metal. The Germans had succeeded in destroying the barricade, but they also blocked their only way down. Oops!

Finally, we made our way back through the endless corridors to the beginning. After exiting the fort, our guide took us up onto the roof of the fort. We followed a path through the forest with no evidence we were climbing on top of a massive fort. When we emerged on the other side of the woods, it became clear how gliders could land on the roof: it was immense! It’s easily 5 or 6 football fields and right in the middle is a farmer’s field. How bizarre!

Our guide explains the German plan of attack by glider

Of course, gliders alone aren’t the reason for the fall of Fort Eben-Emael. The roof did have a couple of machine gun positions, intended to sweep the roof of any infantry. However, due to a series of errors, timing, and the quiet approach of the gliders, those positions had little effect. By the time the defenders knew the Germans were there, it was too late. The Germans moved across the fort’s roof, destroying guns and the concrete bunkers, thereby crippling the fort’s ability to fight.

A day after the gliders landed, the fort surrendered. Although the Germans were unable to break into the fort’s lower levels, the Belgians were unable to get the Germans off the top of the fort. It was remarkable just how quickly and thoroughly this massive fort was neutralized. The capture of Fort Eben-Emael clearly demonstrated how the latest technology, and advanced preparation, could overcome even the biggest obstacles.

The Second World War was a war of science and technology. Both sides raced to find new and improved ways to wage war and gain an advantage. The rising dominance of air power, new weapons, and increased mobility made static defences, like Fort Eben-Emael, the Maginot Line, and the older Liège forts, obsolete. It is curious that four years later, the German army would construct their own series of fortifications, the Atlantic Wall, and were defeated by similar tactics.

I found the scale of the fort remarkable. As a standalone fortification, it surpasses any other fort I’ve visited. Equally remarkable is how that size actually turned out to be a weakness. With so much room on the surface, it was easy for the Germans to hold on and take out the guns one by one. The story reminds me of David vs Goliath  as the greater size of the fort did not provide an advantage.

Visiting Fort Eben-Emael is a fascinating look at a structure that represents the pinnacle of fort design and construction. The Belgian army learned from their mistakes in the WWI forts around Liège and applied that knowledge to the new forts. However, there were obviously still gaps the Germans were able to exploit. Eben-Emael is definitely a fort worth visiting, even just to see how big it actually is.

Have you visited Fort Eben-Emael or one of her sister forts? I would love to know your experience. Please feel free to share your observations in the comments.

Visits are organized regularly and the calendar is posted on their website. Cost is €6 for adults, €5 for seniors, and €3 for children under 12. The visit will take about 2 hours.

We’d like to extend our thanks to the Province of Liège Tourism for inviting us to experience Fort Eben-Emael. We at CheeseWeb are committed to always sharing our honest opinion of any product or service we write about, whether sponsored or not.

Andrew
Andrew is our resident tech-geek and is normally found lurking behind the scenes on CheeseWeb doing things with code that Alison finds mysterious. He comes out of hiding occasionally to write about history and technology. He loves castles, driving on narrow, twisty mountain roads and relaxing with a glass of peaty Scotch. Follow Andrew on Google+
Latest posts by Andrew (see all)
Pin155
Share76
Tweet7
Flip
Email
Read more from this series...
Series: Memorial Tourism