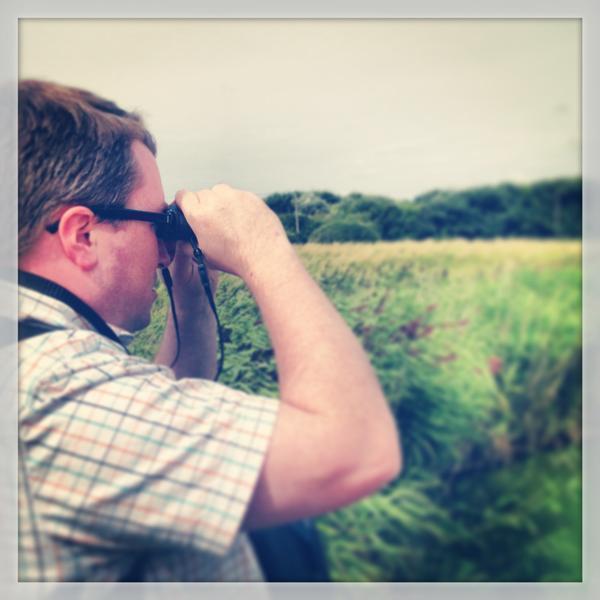 This entry is part 5 of 10 in the series Memorial Tourism.
THIS POST MAY CONTAIN COMPENSATED LINKS. FIND MORE INFO IN MY DISCLAIMER. 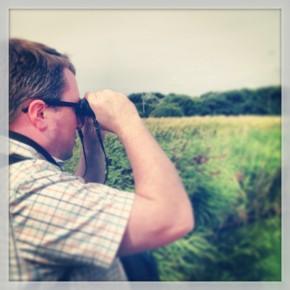 This year, Belgium will host numerous ceremonies commemorating the start of the First World War. Immortalized in John McRae’s famous poem, Flanders’ fields will be in the spotlight, including its museums and cemeteries. It promises to be a busy time for the region.

Unfortunately, 36 years later, Belgium was engulfed in conflict again. Although not as well known, Belgium also preserves numerous sites dedicated to the Second World War. Perhaps the most well known is Bastogne, the site of a vicious battle in December/January 1944-45 and brought to life in HBO’s miniseries, Band of Brothers. Another is the concentration camp at Breendonk.

When we decided to visit Oostende, I read about the Atlantic Wall Museum. Having never heard of it, I was curious to investigate. The Atlantic Wall, built by the Germans, stretched along the coast, from northern Norway to the French-Spanish border. Intended to defend the continent from invasion, it was a massive construction project.

I’ve explored a few sections of the remains of these coastal defences in France and the Netherlands. Generally, the remnants consist of concrete bunkers and gun emplacements, all in various states of decay, after standing exposed for the last 50 years. So I was a little sceptical about the museum’s claim to be the “best preserved.”

Having found the park, you will see a reception building in the parking lot. You then you have a short walk, past the restaurant, to the ticket office. Again, it is a bit confusing at first, but just go with the flow and you’ll soon be on your way.

The Atlantic Wall Museum is made up of over 60 bunkers and 2km of tunnels and trenches, which are remarkably well preserved. I was very impressed.

When you buy your ticket, you get an audio guide that is keyed to particular numbers along the walk. Throughout the tour, you learn about the history of the construction, the purpose of the facilities, and what day-to-day life might have been like. 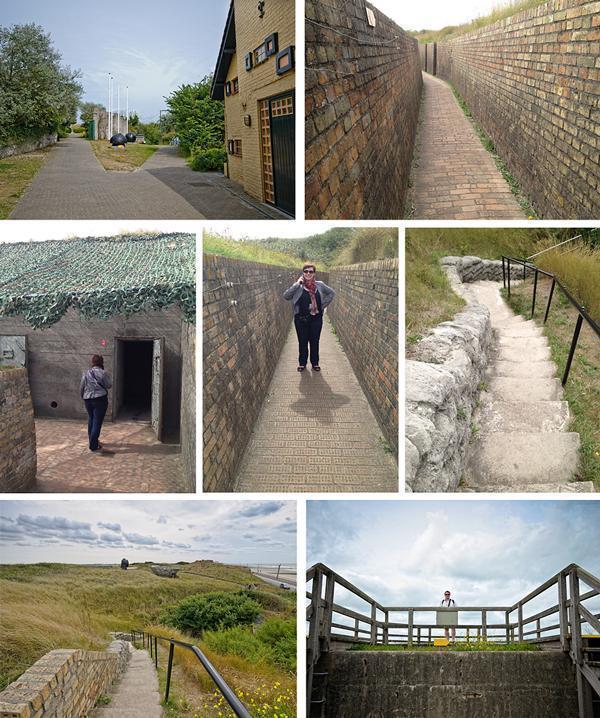 Wear your walking shoes… The Atlantic Wall Museum requires quite a hike!

You will also learn the museum bridges both world wars. One gun battery, The Aachen Battery, was built as part of the German coastal defence system in WWI and was reused in the Second World War.

The site also boasts a remarkable number of authentic artefacts from the era, including an Enigma machine, used by the Germans to encode their communications. There is a wide variety of hand weapons as well as large artillery pieces on display. Many of the bunkers have also been staged to demonstrate living conditions and how the rooms would have been set up. 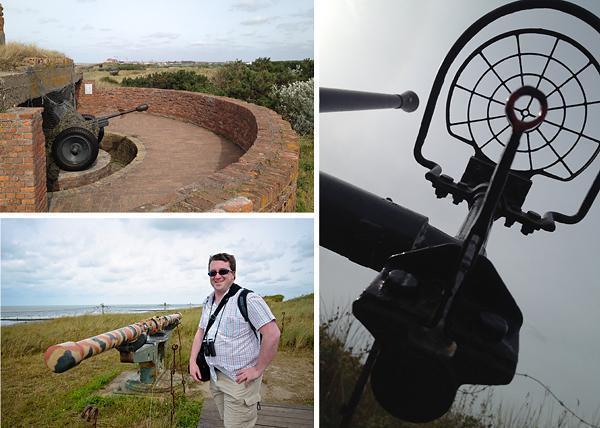 Artillery on display at the Atlantic Wall Museum 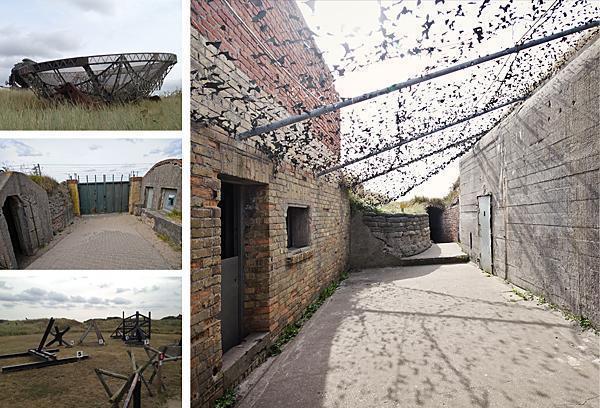 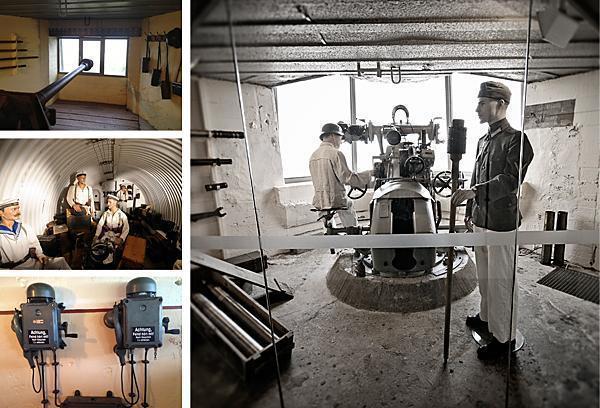 We spent about two hours wandering through the Atlantic Wall Museum but I could have easily spent another hour or so. It was just packed with information and invited you to explore (within reason). Obviously the subject of war is not everyone’s area of interest, but this museum really does justice to explaining life in the Atlantic Wall. 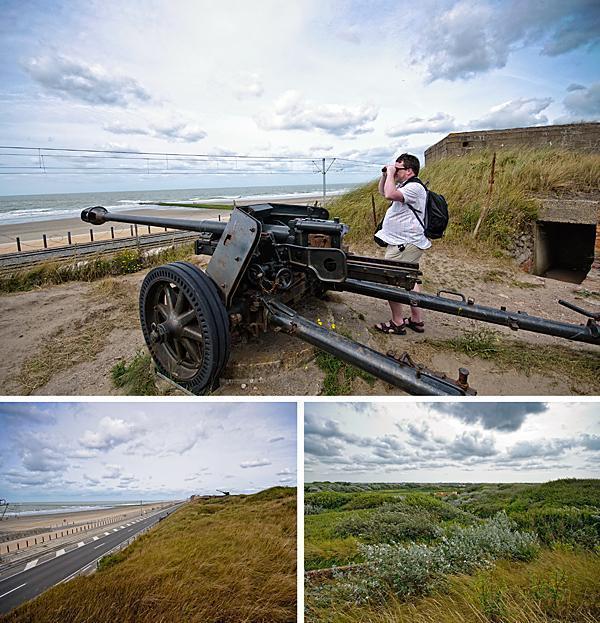 You can see for miles in all directions at this part of the Atlantic Wall. Andrew checks out the coast with his binoculars.

We didn’t have time to explore the rest of the Raversijde Domain, but I would like to go back to visit the Prince Charles Memorial. Prince Charles, Count of Flanders, was the second son of King Albert I. He fought in the war and became Belgium’s Prince Regent from 1944 to 1950.

The Atlantic Wall Museum’s land belonged to Prince Charles and he purposely preserved it for future generations. Prince Charles’ regency was also marked by a number of important decisions, including: women obtaining the right to vote (1948); the establishment of the social welfare system (1944); and membership in the United Nations Organization (UNO, 1945), NATO (1948), and Council of Europe (1949).

Despite the challenges finding the site, it was well worth the effort. It is also a good addition to any First World War agenda, since it bridges the two wars.

By Car – The easiest is to follow signs for the airport and then look for the brown “Domein Raversijde” signs. They aren’t easy to spot so watch for them at intersections.
By Tram – Use the coast tram and stop at Raversijde Domein Raversijde.
By Bus – De Lijn 60-69

Have you been to the Atlantic Wall Museum or another Second World War site? Share your thoughts with us in the comments below.

We’d like to offer our thanks to Visit Oostende for sponsoring our visit to the Atlantic Wall Museum and for allowing us to write (as we always do) our open and honest review. Thanks to Swarovski Optik for letting us test their CL-Pocket binoculars.

Andrew
Andrew is our resident tech-geek and is normally found lurking behind the scenes on CheeseWeb doing things with code that Alison finds mysterious. He comes out of hiding occasionally to write about history and technology. He loves castles, driving on narrow, twisty mountain roads and relaxing with a glass of peaty Scotch. Follow Andrew on Google+
Latest posts by Andrew (see all)
Pin44
Share360
Tweet18
Flip
Email
Read more from this series...
Series: Memorial Tourism