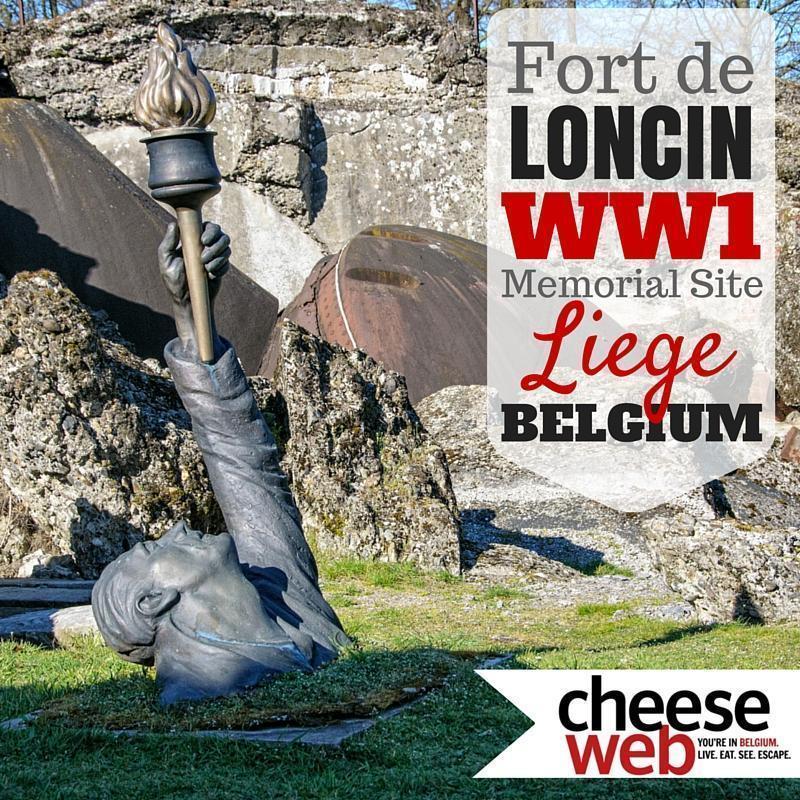 This entry is part 4 of 10 in the series Memorial Tourism.
THIS POST MAY CONTAIN COMPENSATED LINKS. FIND MORE INFO IN MY DISCLAIMER.

The ruined Fort de Loncin, in Ans, in the province of Liège, Belgium, is a powerful memorial to Belgian bravery and the destruction of World War 1.

At 0530 on August 15th, 1914, after three days of siege, a shell from a German gun scored a direct hit on an ammunition magazine at Fort de Loncin, detonating 12 tons of explosives. The resulting blast destroyed the heart of the fort and killed 350 out of 500 men.  an enormous. It was the only fort around Liege that did not surrender.

Almost 100 years later, this fort, just outside Liège, is quiet. Nature has returned. The grass covers the earth, trees have grown up around the fort, and various birds and animals call it home. But amidst the green, you notice traces of the past; a steel turret here, a gun protruding there. Then you turn a corner, and the devastation almost screams at you.

Perhaps I’m a bit dramatic. I’ve visited First and Second World War battle sites around Europe, but most often the true devastation of war has disappeared. For example, the frontline and trenches of the First World War were horrific scenes, but today it is hard to envision now that the land has recovered.

At Fort de Loncin, envisioning the scene is easy because, except for the trees, it has not changed since the explosion.

The remains of the Fort de Loncin tell a dramatic story.

In the 1880s, the Belgian army expected France and Germany would again go to war. The most efficient route would be through the Meuse river valley, because of the dense network of roads and railways.

Two key points on the Meuse were Liège and Namur. Liège was an important crossroad in Europe, with three rail terminals, seven rail lines and 17 roads passing through. If an army was going to excellent through Belgium, capturing Liège was essential.

Fort de Loncin was one of 12 forts designed by General Henri Brialmont and built in a ring around Liège. Finished in just three years (1888-1891), these forts were constructed not using traditional stone but used a new material, concrete.

Concrete allowed the fortifications to be made more quickly, but there were two major flaws: they didn’t use steel reinforcement and the daily stop-starts in pouring resulted in weak seams.

Inside the remaining structure at the Fort de Loncin

If you’ve visited castles or forts from previous centuries, then you’ll immediately notice a difference visiting the forts around Liège forts. Gone are the open courtyards and guns atop battlements.

Siege artillery no longer fired straight at the walls. Now the shells were fired high into the air to come hurtling down inside the walls. To protect the soldiers against artillery shells, these modern forts were built as bunkers, with meters of concrete and earth above.

Concrete forms the majority of the Fort de Loncin

However, as with any technology, as soon as the forts were finished, they were almost obsolete. They were designed to withstand the impact of guns firing a 21cm shell, the largest artillery guns at the time.

However, in secret, the German company, Krupp, was working on a weapon capable of firing a larger, 42cm shell – the infamous Big Bertha.

The Big Bertha guns were used against several forts around Liège, but their most significant success was when they hit the ammunition storage at Fort de Loncin.

The storeroom, containing 12 tons of ammunition, was not built to withstand the explosive impact of this new type of gun and in less than three seconds the fort was destroyed.

The concussion and air pressure created by the explosion lifted the roof of the bunker into the air and then straight down onto 300 men gathered in a central room. They are still there, buried under a massive amount of earth and concrete. All that remains of the storeroom is a massive crater.

Unlike a lot of historic sites, we were able to wander around most of the site (which is great).

Besides the crater and destruction in the central part of the fort, I saw evidence of the tremendous force of that explosion: huge cracks, roofs which shifted and are no longer aligned with the supporting walls and collapsed rooms.

Even if a soldier survived the explosion, the noise and pressure wave must have deafened many men.  The damage was astonishing. In all, 350 of 500 men died in Fort de Loncin. Many of those men were never found but are assumed to be buried under the main section of the fort.

Big Bertha’s reputation originated with the explosion at Fort de Loncin and its success against the Belgian forts. Even so, the forts around Liège had cost the German army valuable time. Because of the Belgian forts, the French and British were able to call up their armies and get them into position.

The story of the First World War might have been different if the Belgians hadn’t stepped in front of the German army. By attacking via Belgium, the Germans exploited a weak section of the French defence and opened a clear path to Paris. By slowing the Germans, the Belgian army gave the French and British time to deploy their troops and counter the advance.

Fort de Loncin is a museum, memorial, and cemetery for those lost.

Today, Fort de Loncin is a military cemetery, commemorative monument, and a museum. I was impressed by how the Belgian government has preserved the fort, protecting the memory without erasing the evidence.

There are a number of monuments on the site, but the most striking is the Flamme de Souvenir (Flame of Remembrance), a bronze sculpture of a mostly buried man raising a torch. It is an apt symbol of the pain.

Fort de Loncin is an important monument to the bravery of the Belgian soldiers who stood in front of a much larger army and denied them passage. Reading history books about the war too often is the sacrifice of these men forgotten. Everyone knows about the war in the trenches, but very little is written about the Battle of Liège.

I encourage everyone to visit Fort de Loncin, to better appreciate the role of Belgium at the beginning of the war, and to see what 12 tons of explosives can do. It is two hours well spent.

Andrew
Andrew is our resident tech-geek and is normally found lurking behind the scenes on CheeseWeb doing things with code that Alison finds mysterious. He comes out of hiding occasionally to write about history and technology. He loves castles, driving on narrow, twisty mountain roads and relaxing with a glass of peaty Scotch. Follow Andrew on Google+
Latest posts by Andrew (see all)
Pin91
Share79
Tweet10
Flip
Email
Read more from this series...
Series: Memorial Tourism