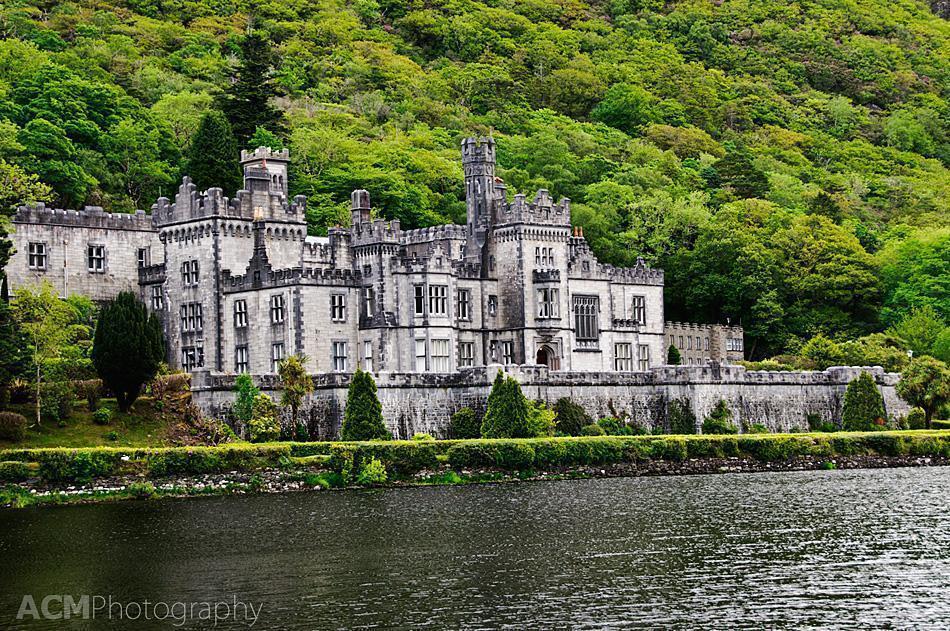 This entry is part 2 of 6 in the series Exploring Ireland.
THIS POST MAY CONTAIN COMPENSATED LINKS. FIND MORE INFO IN MY DISCLAIMER.

So, last spring, when I was researching our Ireland road-trip, I was thrilled to learn Kylemore Abbey is now open to the public. And, even better, the abbey’s immense walled Victorian garden is under restoration and has been open to the public since 1999. I knew we would have to make a detour, north of Shannon, to visit my poster castle.

Aside from the huge parking lot out front, Kylemore was everything I remembered from my poster. We arrived early in the morning and were first through the gates, to catch sight of the view that had graced my dorm room wall for years. The castle; the lake, Lough Pollacappul; the forest, Druchruach Mountain – it was all there and even more breath-taking in person.

My university poster before my own eyes (and camera).

Kylemore Castle was built from 1867 to 1871 by Mitchell and Margaret Henry. For 40 years, they worked to turn the forest and bog-land into a magnificent estate, which eventually covered 13,000 acres. Mitchell also worked to improve conditions for the locals, still recovering from the great famine. He created jobs and provided shelter and even a school for his workers and their families.

Tragedy struck and Mitchell’s wife and daughter both died suddenly. In 1903, he sold Kylemore to the Duke and Duchess of Manchester who lived life a little too large at the castle. After only a few years, the heavily mortgaged Kylemore estate was taken over, by a London banker, until a buyer could be found.

The new owners were a far cry from those previous. The Irish Benedictine Nuns purchased Kylemore Castle along with 10,000 acres, for a little over £45,000, in 1920. We were surprised to learn of the Belgian connection to Kylemore. In fact, the nuns had originally come from Ypres, where their abbey was destroyed in WWI.

The nuns ran a boarding and day school for girls as well as a farm and guesthouse. Over the years, the nuns opened Kylemore to visitors. Today, most of the abbey itself is reserved for the nuns to live and worship.

Four rooms in the abbey have been restored to their former glory. This was our first stop on our visit to Kylemore. Walking through these grand rooms, you get a sense of what Kylemore castle looked like during the Henrys’ time there.

How the dining room may have looked in Mitchell Henry’s time.

The sitting room of Kylemore Castle

We then made our way down to the gothic church. It was built by Mitchell Henry, for his wife, who died only four years after its construction. It was designed as a miniature cathedral and contains beautiful stained-glass windows. Inside there are marble pillars from different provinces in Ireland; green marble from Connemara (Connaught), red marble from Cork (Munster),  black marble from Kilkenny (Leinster) and grey marble from Ulster.

But of course, for me, the highlight was the 6 acre Victorian Walled Garden. It was quite a trek from the Abbey, but we eschewed the shuttle bus in favour of a leisurely stroll through the stunning Connemara Mountain landscape.

It is easy to see why the Henrys fell in love with this place and why the nuns purchased it years later as their sanctuary. Despite the busy tourist route out front, the abbey still feels miles from anywhere. It is definitely a spiritual retreat.

The garden itself did not disappoint, although the erratic weather did try to dampen more than our spirits. Between showers we had a lovely walk through the garden and could imagine what it was like at the height of its glory.

Only plants that grew in Victorian times are planted in the walled garden today. Herbs and vegetables grown here are used in the restaurant and tea room at Kylemore.

Viewing the Connemara Mountains from the garden

The nuns are also working hard to restore the original 21 glasshouses. So far, two of the glasshouses have been rebuilt along with the Head Gardener’s House and Workman’s Bothy.

The remains of the Victorian Garden’s Buildings

After a beautiful morning at Kylemore, and lots of walking around the estate, we headed for the restaurant. Although it is cafeteria style, the food is worthy of a fine dining restaurant. The traditional Irish dishes are made fresh each day, from seasonal ingredients. Our Irish stew was the best we had encountered in Ireland.

If someone had told me back in my university days, I would one day stand pointing my own Nikon at the same spot as my poster photographer, I would have laughed. Visiting Kylemore Abbey was a dream come true for me and it more than exceeded my expectations.

Even more magical in person

For many more photos of Kylemore Abbey and the Victorian Walled Garden, visit our Facebook Page.

Alison Cornford-Matheson
Alison Cornford-Matheson is a Canadian travel writer, author, and photographer. She is the founder of Cheeseweb.eu, a website dedicated to slow and sustainable travel, off-the-beaten-path destinations, and cultural awareness through travel. She and her husband, Andrew, are the founders of RockFort Media, committed to helping entrepreneurs tell their stories online. Alison has visited over 45 countries and, after living in Belgium for 11 years, now lives full-time in a Bigfoot motorhome named Yeti with Andrew and their well-travelled cat.
Latest posts by Alison Cornford-Matheson (see all)
Pin30
Share103
Tweet8
Flip
Email
Read more from this series...
Series: Exploring Ireland