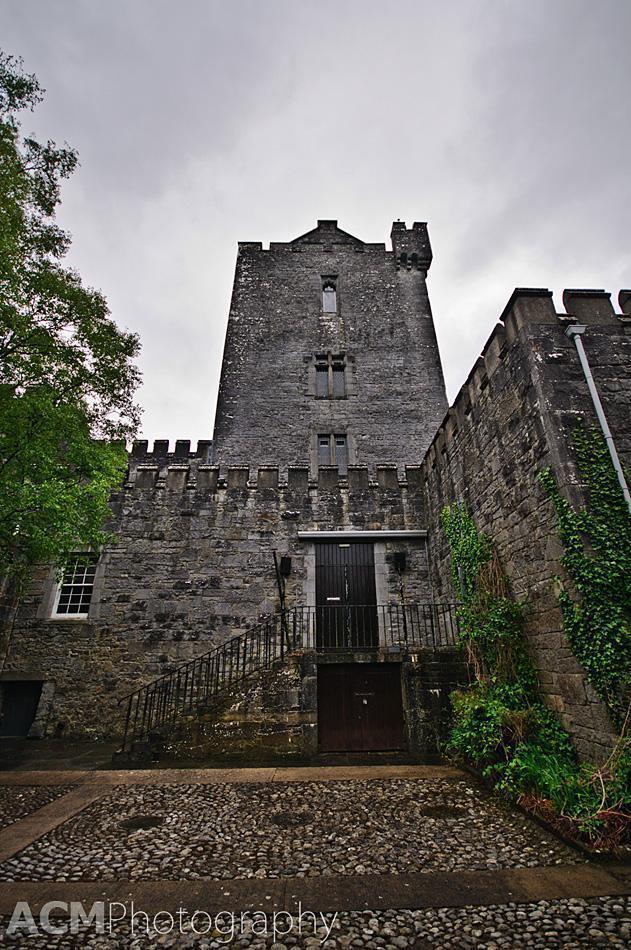 The Castles of Shannon Heritage, Ireland

This entry is part 1 of 6 in the series Exploring Ireland.
THIS POST MAY CONTAIN COMPENSATED LINKS. FIND MORE INFO IN MY DISCLAIMER.

Dark and Foreboding, Knappogue Castle tower looms over the countryside.

Alison and I recently returned from a week-long road-trip of Western Ireland. One of the highlights was visiting the castles and heritage properties of the Shannon region.

While there, we visited no less than seven castles, abbeys, and tower houses. Even so, we barely scratched the surface, as there were hundreds of tower houses built during Norman rule, in the 12th century, and beyond. We decided to concentrate on properties maintained by Shannon Heritage. Each one had something special to engage the visitor and bring Ireland’s ancient history to life.

Studying history in school often requires boring memorization of dates and names. Luckily, I was inspired, early on, by a public school teacher who showed my class slides of his travels in Italy, Greece, and more. His personal descriptions of the places and their history made it more real to us as students.

Twenty-five years later, having had the opportunity to travel, I understand his passion for history.  When you visit historical locations in person, the story becomes much more engaging. If done right, such a visit should make you feel like you have stepped back in history. This is exactly what we found at the Shannon Heritage castles.

Nestled behind trees and away from the road, Knappogue Castle is an example of a modernized tower house. Tower houses were common in Ireland, between the 12th and 16th centuries. Most have fallen into ruin, but of those that remain, a large number have been restored.

Originally built in 1467, Knappogue Castle was renovated over the centuries so the original tower now forms part of a larger manor and walled garden. Today the castle is an interesting contrast between the dark, solid core of the tower and the bright, elegant rooms built around the tower’s base.

Upon entering the castle, you find yourself in the tower’s main hall. The furnishings here are spartan and the stone floors have been polished smooth over the centuries. Stairs lead up to additional rooms and defensive positions, again without a lot of light or comfortable furnishings.

Inside the Great Hall at Knappogue Castle

Passing through the main hall, on the lower floor, you find yourself transported to the 19th century, where the modern additions contrast sharply with the ancient tower. These refined rooms have big windows letting in light, corniced ceilings and comfortable furnishings.

Stepping outside, you are invited to walk through the castle’s walled garden. Dating from 1817, the garden features roses and clematis. The garden’s walls help keep off the wind, so it’s a nice spot for a stroll on a summer’s day.

Knappogue Castle from the Walled Garden

Craggaunowen – The Living Past, Prehistoric Park

Somewhat hidden in a small valley, Craggaunowen – The Living Past also features a tower house, but it offers an interpretation of Ireland’s prehistoric and early Christian periods, as well.

Entering Craggaunowen, you are provided with a map that takes you on a short walking tour, through a small wooded area. The first stop is the tower house.

Unlike Knappogue, this tower house has been restored to its original look – minus the livestock, reeds on the floor, and mud! Built in 1550, it has an open first floor, where the clan would sleep in winter or gather in times of danger. You can climb to the upper floors, which were used as storage, defence, and chambers for the clan leader, and at the top you can take in the view.

The next stop is the Crannog, a man-made island built in the middle of a lake, for defensive purposes. It is reached by a single causeway, defended by a tower, and is surrounded by a wooden palisade. This Crannog had enough room for two families, in buildings made from wood and mud. I hadn’t heard of Crannogs before, but it was interesting to learn about them, especially when you consider how this evolved into moats around castles.

The Crannog at Craggaunowen – The Living Past

The ring fort, next on the map, was like the Crannog, without the water. Surrounded by an earthen wall, topped by a wooden palisade, the ring forts provided security as well as a defensive height advantage. There was also a ‘secret’ entrance, dug under the fort, to provide a storage space as well as an escape route.

The final exhibit was not something I had expected. We entered a glass building, containing a sailing boat about 10 meters long, covered in animal hide stretched over a wooden frame. Called a ‘curragh,’ this boat was built in the 1970’s as a replica of one that was used by St. Brendan the Navigator on his voyages.

St. Brendan, the patron saint of sailors, was an Irish priest who lived during the sixth century AD. He is known for his seven year voyage to the Isle of the Blessed. A text from the early 10th century describes his fantastical voyage and how he encountered a sea monster, watched a gryphon die battling another bird, and sailed past an iceberg.

A twentieth century interpretation of the voyage suggested that St. Brendan might have actually travelled to North America. Critics pointed out his boat, a curragh, could never have made the journey. So, in the 1970’s, a crew led by Tim Severin recreated the voyage from Ireland to Newfoundland, proving that a curragh could indeed make the journey. This is the boat now housed at Craggaunowen, and it is amazing to think how survived the North Atlantic!

The Brendan – Hard to believe this tiny boat sailed the North Atlantic!

Beyond the main attractions at Craggaunowen, the curators have arranged some other interesting exhibits. These include the remains of an early dug-out canoe and Iron Age road, an old campsite that demonstrates how they used to heat water, and an Irish cross. All in all, this was a well put together site that didn’t overwhelm you with details.

Located on King’s Island, in the River Shannon, as it passes through Limerick, King John’s Castle was completed around 1200 and was built on the site of a former Viking stronghold. Those of you familiar with Robin Hood will recognize the name King John, although there is no tie to the legend here.

The castle now boasts a brand new visitor’s centre which, using videos and displays, provides an overview of the castle’s history, including various sieges in the 17th century.

Leaving the visitor centre you are free to explore the remaining towers and walls, from which there is a great view of the city. Each room of the castle contains a description of its purpose, although how it would have been decorated was mostly left to your imagination.

The most interesting part of the visit, for me, was the archaeological site. During the construction of the new visitor’s centre, archaeologists discovered the remains of an early settlement. To preserve their findings, they constructed the new building on posts suspended above the site. The new visitor’s centre protects the remains while providing visitors the chance to view them. Also, out in the courtyard, are the remains of a medieval garrison and soldiers’ quarters which you can view from above.

Overall, the site was well preserved and a very worthwhile visit. Like the other sites, you direct your own experience so you take in as much as you want. I enjoyed exploring the walls and the archaeological sites, and I expect that the castle has not yet revealed all her secrets!

Shannon Heritage has done a wonderful job restoring each of these sites and making history come alive. Every site I visit is interesting, but Shannon Heritage went beyond simple restoration to offer sites where you aren’t forced to read or memorize history. They simply point you in the right direction and let the history unfold around you.

In a future post we will explore one of Shannon Heritage’s most popular properties, Bunratty Castle.

Andrew
Andrew is our resident tech-geek and is normally found lurking behind the scenes on CheeseWeb doing things with code that Alison finds mysterious. He comes out of hiding occasionally to write about history and technology. He loves castles, driving on narrow, twisty mountain roads and relaxing with a glass of peaty Scotch. Follow Andrew on Google+
Latest posts by Andrew (see all)
Pin61
Share4
Tweet6
Flip
Email
Read more from this series...
Series: Exploring Ireland