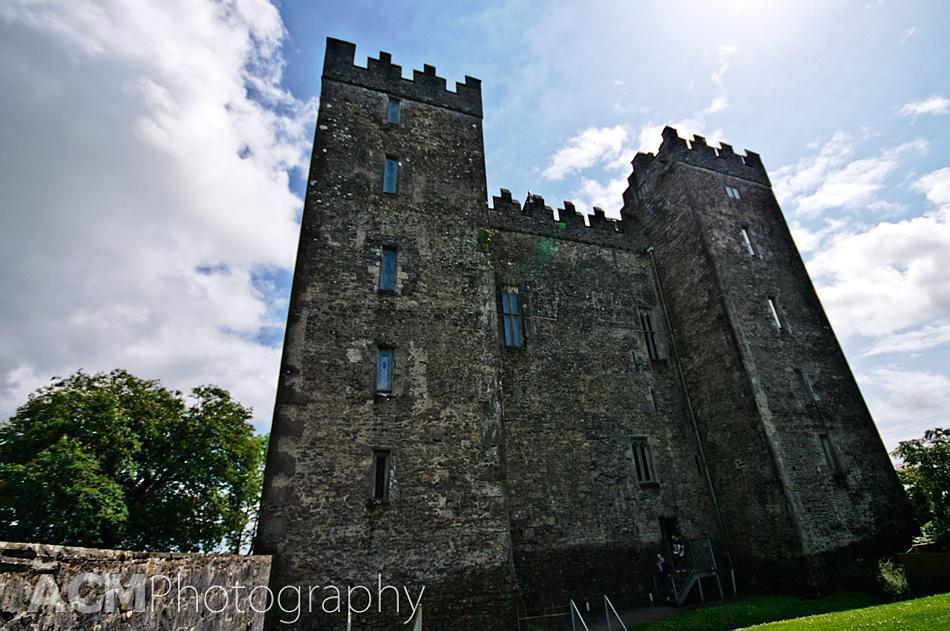 This entry is part 3 of 6 in the series Exploring Ireland.
THIS POST MAY CONTAIN COMPENSATED LINKS. FIND MORE INFO IN MY DISCLAIMER. 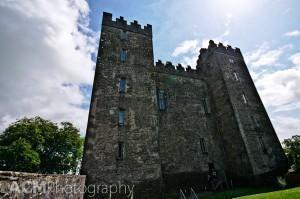 Visiting historical sites is a great way of gaining an appreciation for events and places. In my previous post about the Castles of Shannon Heritage, I wanted to show history doesn’t have to be boring. I’d love to travel back in time, but sadly the time machine hasn’t been invented. However, there is Bunratty Castle and Folk Park, which does more than just present the history, it immerses you in it.

Established at the edge of the Ratty River, close to the Shannon estuary, Bunratty Castle is a large tower house built by the MacNamara family in 1425. This castle, although called a tower house, is nothing like Knappogue or Craggaunowen. The architecture feels like a step between Craggaunowen’s simple tower and a more refined lord’s manor.

Bunratty Castle is one solid building, like a tower house, but it was built with towers sticking out on each corner and a ditch around it. This design serves two purposes: to  provide more interior space and to allow the defenders to cover more angles, while protected inside the building. Obviously this building was meant to be lived in, and not just as a place of temporary refuge.

Inside the castle, visitors are free to wander through the majority of the rooms. The biggest room is the Great Hall which served as a banquet hall and audience chamber. Despite being in the center of the building, I didn’t find it dark or closed in, like Knappogue’s tower. It is decorated with tapestries and furniture from the 16th century, really giving us a sense for how the hall may have looked 500 years ago.

We exited the Great Hall to climb the stairs up to more rooms including the Earl’s bedroom and the private and public chapels. I was surprised at the number of rooms crammed into Bunratty Castle, especially when compared to Craggaunowen and Knappogue. The extra space afforded by the four towers allowed for many more rooms. One thing to note is the stairwells are not for the claustrophobic!

Stepping outside the castle, we entered the world of 19th century Ireland. The Bunratty Folk Park features recreations of historical cottages and buildings and includes a small village main street, complete with post office, shops and a working pub.

One of the many cottages in the Bunratty Folk Park

We wandered through the houses, furnished with period pieces, and smelled the smoke of peat fires the staff had lit in each house. The small size of the buildings and the overwhelming smell of the peat smoke made us really appreciate fresh air and space.

The homes are representative of a wide variety of social classes, from the blacksmith’s cottage all the way to the wealthy family’s Georgian Bunratty House. The park also includes a church, moved stone by stone from its original location, a beautiful walled garden, and a couple of mills demonstrating two different styles of construction. 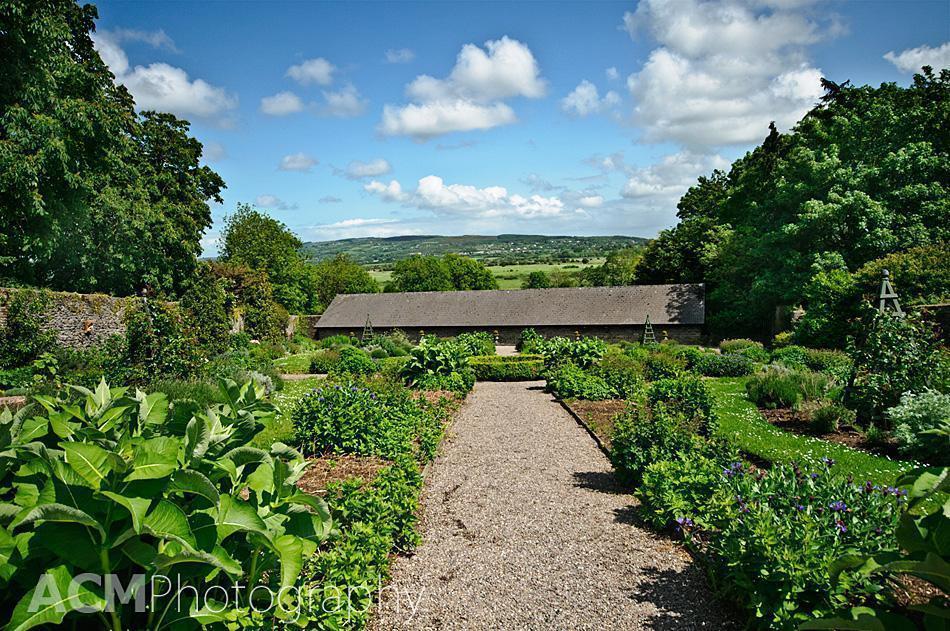 View from the walled Garden 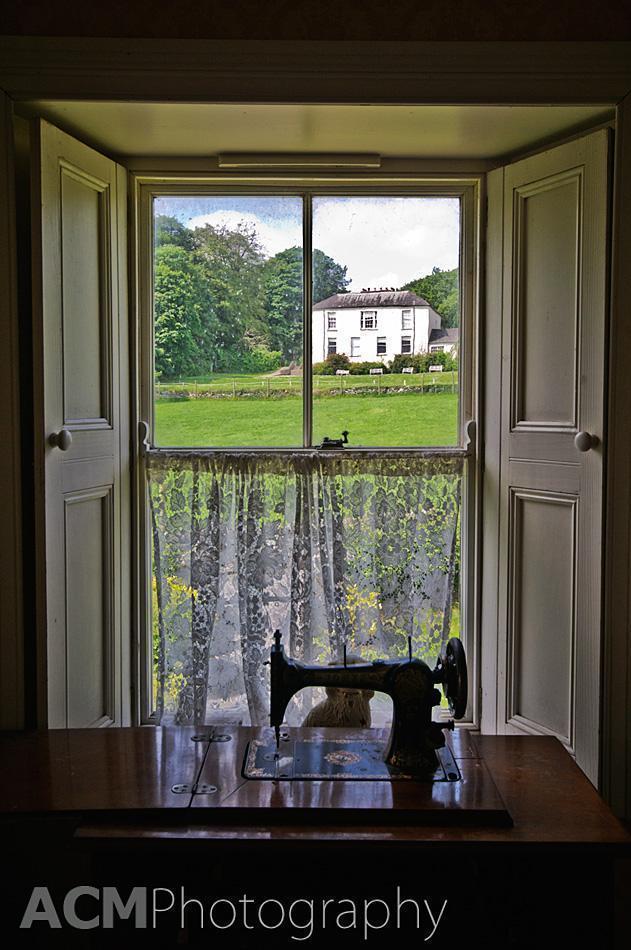 Inside one of the homes at Bunratty Folk Park

There are also a number of animals in the park, such as chickens, ponies, and sheep. My favorite was the Irish wolfhound exhibit! The two in the park were gentle giants and loved attention. 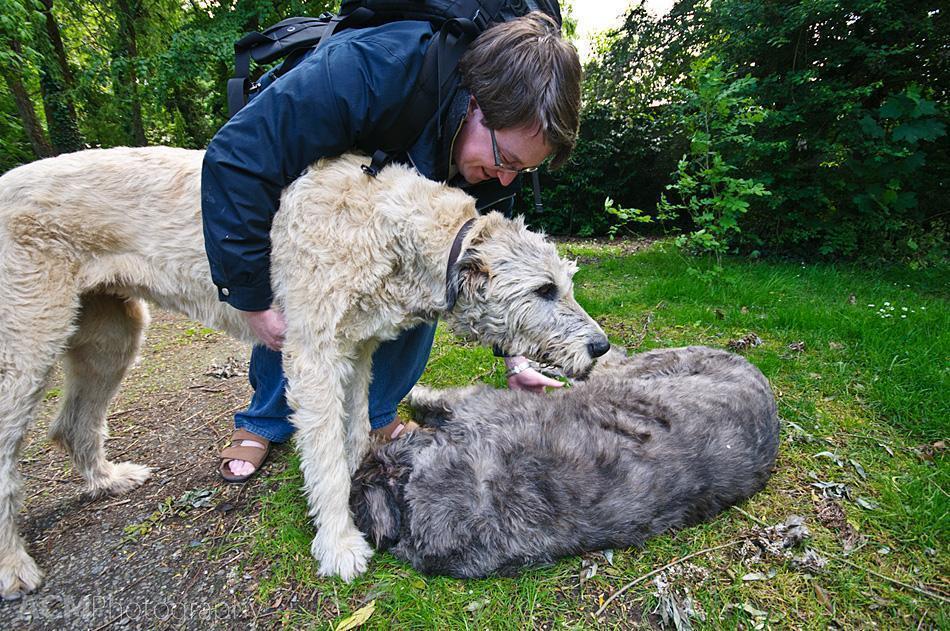 Getting some love from the Irish Wolfhounds

Bunratty may sound like it’s only for people with children, but I enjoyed walking through the park and exploring the different houses. I recommend you stop at the village pub for a pint and a bite to eat. Afterwards, stroll through the shops in the village and check out some of the local products and crafts. 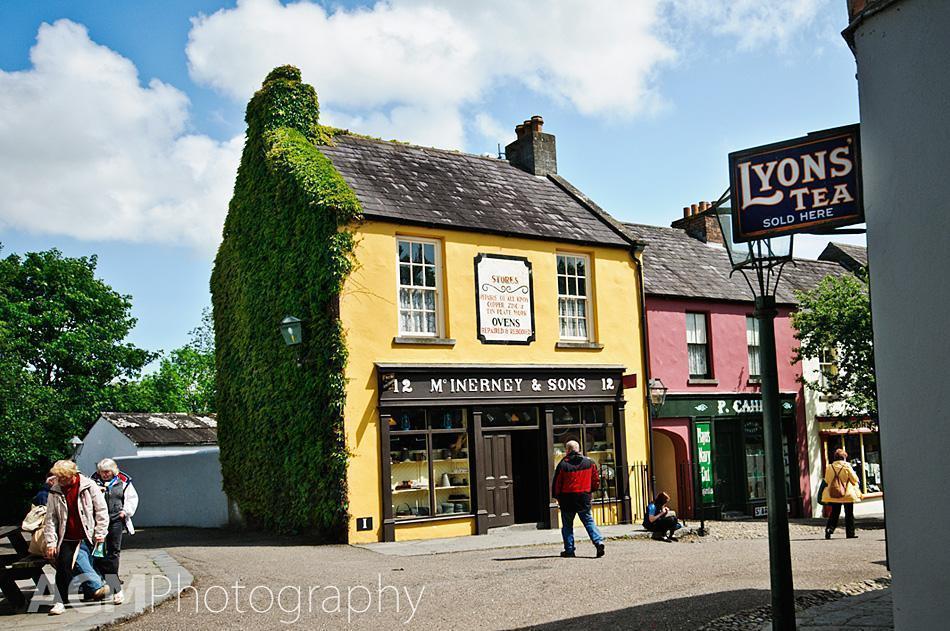 At most historical sites our visit would be finished at this point. Not so at Bunratty where they also feature nightly medieval banquets! Dinner, drinks, and entertainment in the banquet hall of the castle? Yes, please!

There are two sittings for the banquet, the first at 5:30pm and another at 8:45pm. Arriving at around 8:30pm, we await our entrance to the park and then to the castle. Upon entering, we were led through the park to the foot of the castle. Once we were gathered, the Earl’s Butler welcomed us to the castle and we were piped, by a bagpiper, into the Great Hall. 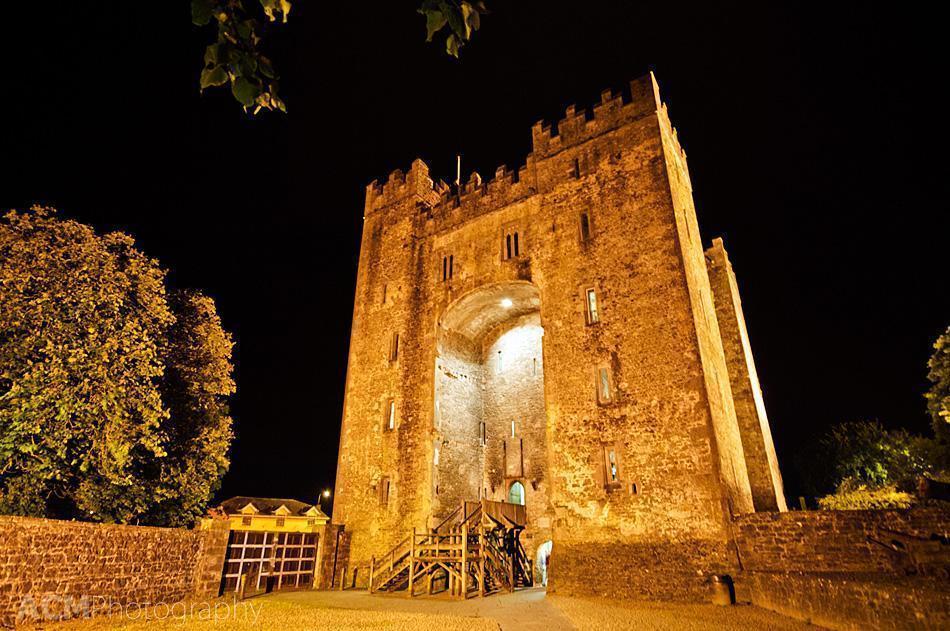 In the Great Hall we were each given a cup of mead (wine made out of fermented honey and water) and some bread. This was called the ‘Bite of Friendship’ and was offered to protect each visitor within the walls of the castle. The Butler, dressed in period costume, explained the history of Bunratty. This was followed by a beautiful recital by the Castle Singers. We then proceeded downstairs to the banquet.

If you’ve ever attended a dinner theatre, that is the closest I can come to explaining the banquet. The costumed staff, did double duty as entertainers and servers. The food is served in four courses with red or white wine. Each course must be approved by the ‘Earl’, a randomly selected guest, before it is served. Between each course there was music and song, keeping us entertained and laughing the whole time. As this is a period banquet, keep in mind all we had to eat with was our ‘dagger’!

After enjoying the meal, the performers took the stage again and performed a number of traditional songs. One of the songs was a familiar one, The Belle of Belfast City. This is a popular song in eastern Canada, so we sang along happily. The harpist and singers were excellent especially in a hall with good acoustics. 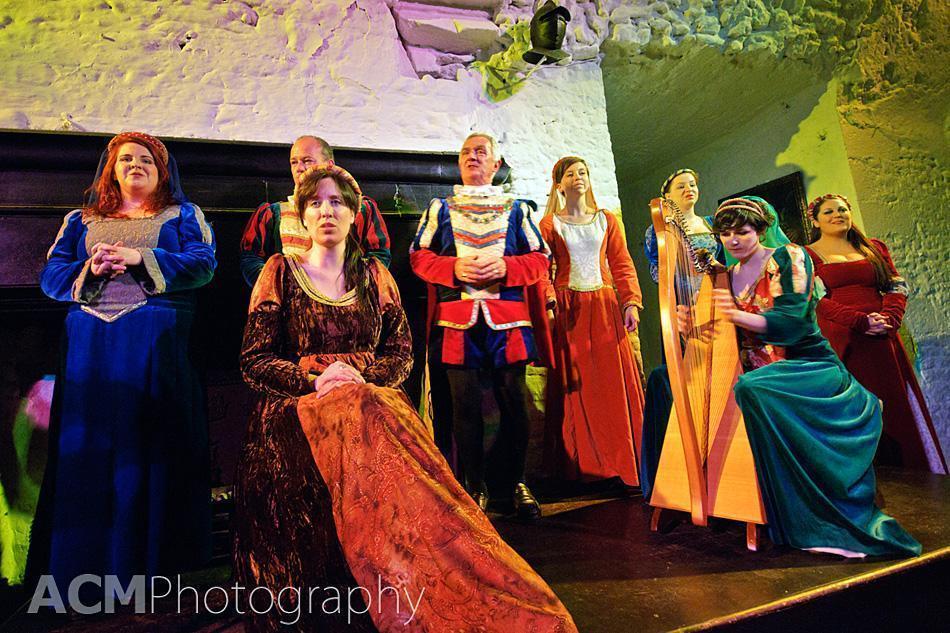 Bunratty Castle and Folk Park was a wonderful experience that was both educational and a lot of fun. It was a full day so if you go I recommend staying somewhere nearby. History can be fun and memorable, without being boring!

CheeseWeb will be taking a bit of a holiday throughout August but be sure to check in with our Facebook Page for updates. Be sure to sign up for our newsletter, CheeseWeb Escapes, for more great travel destinations in Europe.

Andrew
Andrew is our resident tech-geek and is normally found lurking behind the scenes on CheeseWeb doing things with code that Alison finds mysterious. He comes out of hiding occasionally to write about history and technology. He loves castles, driving on narrow, twisty mountain roads and relaxing with a glass of peaty Scotch. Follow Andrew on Google+
Latest posts by Andrew (see all)
Pin57
Share2
Tweet5
Flip
Email
Read more from this series...
Series: Exploring Ireland