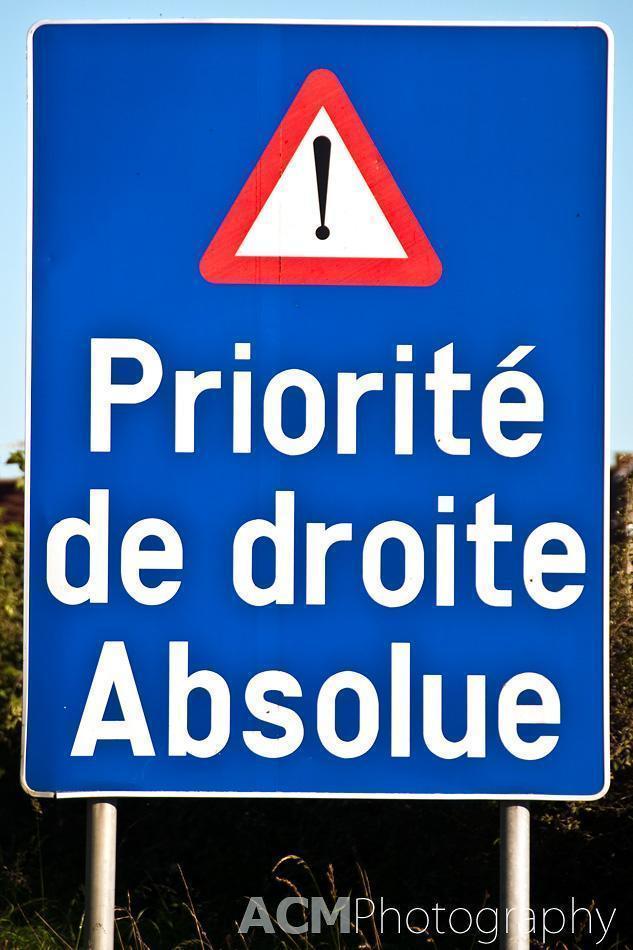 I first wrote this post waaay back when we arrived in Belgium. I was literally terrified every time I got in the car. I’m happy to say I’m a bit calmer now but, even five years on, I’m still not driving in Belgium. Interestingly, I’ve been in many other places in Europe where I’ve felt, ‘Hey, I could drive here.’ Granted, living in Brussels, I don’t have a real need to drive and Andrew is happy to play chauffeur when necessary.

I was reminded of this post when, on a recent outing, we spotted the sign in the photo. It pretty much sums up driving in Belgium.

My parents question my decision not to drive in Belgium. “Not even in your own little town?” asks my Mom. I laugh, but how do I explain the driving situation here to folks who are used to the Atlantic Canadian concept of traffic?

I remember a time when a 20 minute wait for the traffic lights on my way to work was a long, annoying commute. A 20 minute wait on the Antwerp ring might get you 30 cm. But it’s not the volume of traffic that has me confined to the passenger seat, I drove without (much) fear in LA. I can handle the 8 lane highways. The trouble with driving here is a bit more intangible.

First, there are the other drivers. It was not until the 60s that people actually needed a license to drive here. Even when licenses became mandatory, those who had already been on the roads needed no testing before they were handed their permits. So there are a lot of people on the roads who had no more training behind the wheel than ‘Well, let’s see what this here thinger does’

In addition, they are not the polite you go … no I insist, you go ahead, sort that Canadians are (laughter erupts from Canada, but it’s true, we’e nicer on the roads.) If a Belgian feels they have the right of way there is no way they are giving it up (whether they are in the right or wrong makes no difference.)

This leads me to the crazy Belgian driving rules; the most confusing for new comers being Priorite a droite. As in English ‘droite’ (right) has two meanings: the opposite of left; and a legal or presumed entitlement. Priorite a droite definitely embodies both of these definitions. The rule is: if you are driving along and someone is entering your road from the right, you must yield to them. This almost makes sense in a four way stop all roads are of equal size situation. But imagine barreling along on a major road, and suddenly a car pulls out of an unmarked lane that you didn’t notice until the last second … do you see where I’m going with this.

The second meaning, entitlement, definitely comes into play in these situations. Belgians feel entitled to enter from the right, without looking, hesitating or even glancing in your direction … even when it makes no earthly sense for them to do it, like in a round about for example. They would rather have the traffic clog up to a stand still than surrender their priority. If everyone in Belgium was Belgian, maybe this would all work out. However, there are a lot of non-Belgians here and a lot of unsuspecting people just passing through, so you can never be 100% sure what the car in front of you is going to do.

Belgians, like most Europeans, also drive much faster than North Americans. For example, Everberg looks like a quaint, quiet little town. It is rural and charming and very, very quiet … until quitting time rolls around. During rush hour I feel like our house is a metre away from the finish line at the Indy 500. Those Belgians who do not live in their cars, protest the speeds at which people race through their towns. They have thus come up with all manner of creative ways of slowing down traffic, generally involving putting something in the middle of the road: a giant speed bump that requires a 4X4 to get over, cement barriers that only allow one car to pass at a time, planting trees in the street (that’s right I said in the street) and painting parking spaces in one lane.

This last one results in another quirky rule: If there is a car parked in the street on your side of the road, you pull up behind it as close as you can without touching the bumper and yield to on-coming traffic. Once the traffic has passed you turn on your signal light and whip out into the street (I learned this rule while in the car with my landlady).

The other problem for new comers and tourists is the lack of signage. Somewhere along the line, Belgians decided that they knew where stuff was so why bother to waste good money on something as frivolous as signs, (when they could spend it on trees to plant in the street.) So don’t bother looking for route numbers or signs five kms ahead of your exit to warn you where to go – they just aren’t there. In the unlikely event that there is a sign, you have to already be in the exit lane to see it in time. Sometimes, if the sign budget is really tight, there will be a sign only on one side of the highway, so if you’re traveling in the opposite direction you don’t see it until you’ve done a u-turn because ‘Brussels can’t possibly be this close to Paris…’

Add to that the place name problem. Belgium, being a bilingual country has place names in Flemish and French. Unlike in Canada where we call our cities the same thing in French and English (and if there is any confusion, print our signs in both languages) the Belgians don’t. If you are in a Flemish province, all of the place names are in Flemish. If you are in a French province, they are in French. This doesn’t cause a huge problem if your destination is Brussels (Brussel in Flemish; Bruxelles in French) but it can be if you are looking for Antwerp (Antwerpen in Flemish) and you unwittingly enter a French province and only see signs for Anvers. Then there are the totally unfathomable ones like Mons / Bergen and Tourai / Doornik. Your English maps aren’t going to help you here.

Lastly, there is my number one reason for not driving in Belgium: Trucks, or Lorries as the Brits call them, or evil machines of death as I call them. I hate transport trucks (this may have something to do with being run off the road by one and doing a complete 360 in the air and landing in a snowy median a few winters ago, totaling my car and my driving nerve in the process … just a hunch). I have never seen so many trucks as on the highways here. There are from all over Europe: Germany, Poland, Spain… And they carry anything and everything. There is nothing more unnerving than being sandwiched in traffic, in road construction narrowed lanes, between four huge trucks. My invisible passenger side break gets quite a workout, let me tell you.

So Mom, Dad, I won’t be driving here anytime soon. Maybe if I harden my heart and develop nerves of steel and an overblown sense of entitlement while behind the wheel I’ll be ready to hop in the driver’s seat. Until then though, me and my invisible break will stick to the passenger side.

Alison Cornford-Matheson
Alison Cornford-Matheson is a Canadian travel writer, author, and photographer. She is the founder of Cheeseweb.eu, a website dedicated to slow and sustainable travel, off-the-beaten-path destinations, and cultural awareness through travel. She and her husband, Andrew, are the founders of RockFort Media, committed to helping entrepreneurs tell their stories online. Alison has visited over 45 countries and, after living in Belgium for 11 years, now lives full-time in a Bigfoot motorhome named Yeti with Andrew and their well-travelled cat.
Latest posts by Alison Cornford-Matheson (see all)
Pin
Share18
Tweet9
Flip
Email