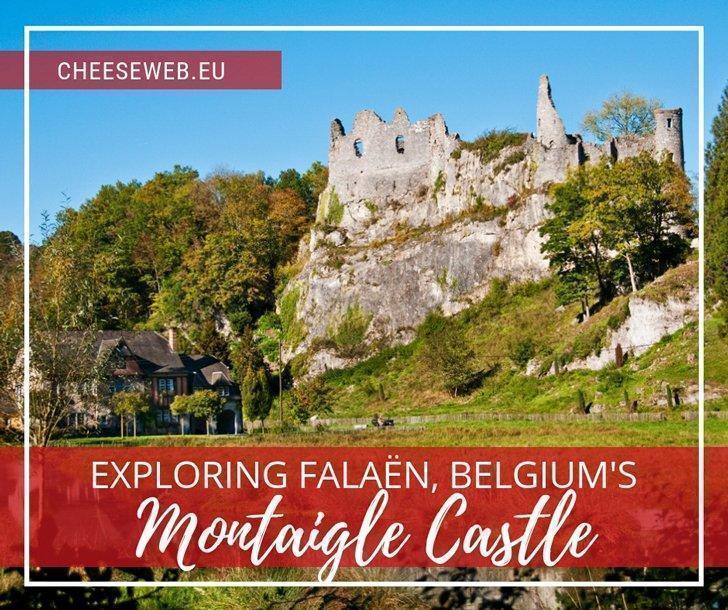 The atmospheric ruins of Montaigle are one of the many castles in Belgium you are free to explore. Learn about this family-friendly day-trip from Brussels to the Namur region.

I like castles. I think it’s because I’m drawn to the extremes they represent: the romance of court life and the violence of battle. However, it could also be because I like to climb on things.

My father jokingly asked me the other day, how many castles we’ve visited. I didn’t know. Searching through CheeseWeb, we’ve visited castles, chateaus, fortified towns and ruins throughout Europe. There was Les-Baux-de-Provence, Mont-St-Michel, The Rhine Valley, Groot-Bijgaarden, Arcen, Wawel, Villandry, Chenonceau, and many more.

Each one has its own character and its own history. Although perhaps best known for chocolate and beer, Belgium also hosts a large number of castles and chateaus that are worth visiting.

A while back, our friend, Gilbert, told us about a ruined castle, in southern Belgium, called Montaigle. The ruins sit on a rocky spur overlooking a couple of small rivers, close to the Meuse and the city of Dinant.

Gilbert said the ruins had an interesting history and the area was worth a visit. Alison and I had visited the Dinant area before and liked it. The drive along the river is reminiscent of the Rhine river valley, with many castles, beautiful vistas, and gorgeous chateaus.

Since we had not been on a Sunday Mystery Drive in a long time and last Sunday was a gorgeous October day in Belgium, Alison and I decided to get out of the city and enjoy the day.

Located in Falaën, Montaigle castle is about an hour south of Brussels, using the fastest route. The castle itself is found on D-roads, meaning the roads get small, winding, and, if you like driving, very interesting.

Once you find the castle, it’s a bit challenging to find a parking spot, as there isn’t a parking lot and access to the site is via a private road. We were lucky and found parking at the bottom of the private road.

We then walked the 750m to the entrance of the ruins which turns out to be on private land. In fact, the whole site is privately owned (by the del Marmol family), so don’t be shy. Just head for the renovated barn that houses the museum and ticket office.

After paying 4 euros, you trek up a fairly steep path to the castle ruins. The ruins you enter are from the 14th century, when the main castle was built by Guy de Dampierre, Count of Namur.

During the 15th century, the castle became a principal town, in the county of Namur, and was renovated into a more comfortable residence. Floors were added to increase living space, as well as large windows for more light, chimneys, latrines, vaulted cellars, and more.

In the end, the castle was destroyed by Henry II of France in 1554, after being abandoned by Charles the Fifth during the Italian War of 1551-1559 (also known as the Habsburg-Valois War).

The site, of course, has a much longer history than the current castle. Many archeological investigations, over the years, have revealed the site has been used defensively for the past 1500 years, starting with a Roman garrison established there around the 3rd century.

There is also evidence the caves in the area were used by pre-historic man. Even after the castle was destroyed, archaeology has shown there have been various attempts at living there over the past 450 years.

What remains,  is a few of the larger outer walls, an outline of the interior rooms, the courtyard, water well, and some of the cellars.

The preservation and stability of the site are thanks primarily to the work done since 1865 by the “Friends of Montaigle,” to minimize the deterioration of the walls from weather and vegetation.

As with most ruins in Europe, you are pretty much free to wander around the site wherever you want. Very few railings or other restrictions exist.

If you are able to visit on a beautiful day, it’s a nice spot to enjoy a picnic, as the courtyard is now covered with grass rather than cobblestone.

The interior of the Montaigle Castle Ruins

If you like history or you just like to see old architecture, Montaigle and the Dinant area has a lot to offer.

When people think about tourism in Belgium, they usually come up with beer and chocolate, and maybe World War I.  But the castles in Belgium should not be overlooked. Combined with a scenic drive through rural Belgium, there is a rich history out there to be enjoyed with a glass of beer and a piece of chocolate!

Andrew
Andrew is our resident tech-geek and is normally found lurking behind the scenes on CheeseWeb doing things with code that Alison finds mysterious. He comes out of hiding occasionally to write about history and technology. He loves castles, driving on narrow, twisty mountain roads and relaxing with a glass of peaty Scotch. Follow Andrew on Google+
Latest posts by Andrew (see all)
Pin144
Share318
Tweet14
Flip
Email