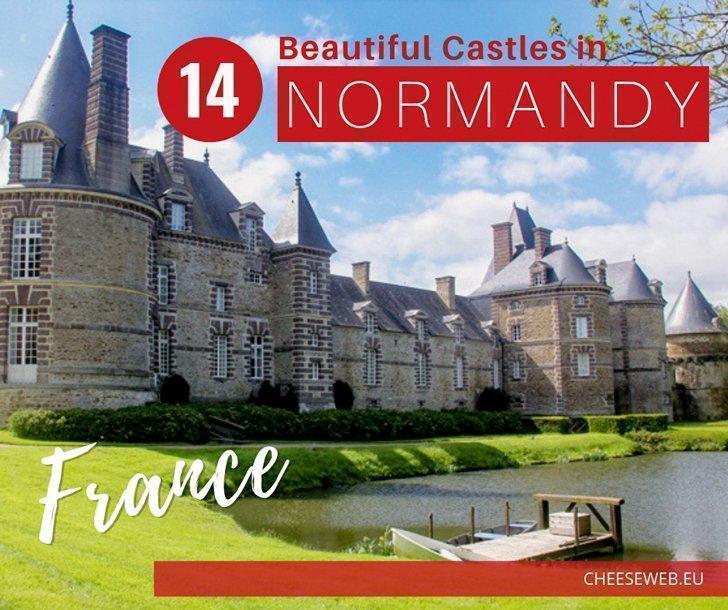 The 14 Most Beautiful Castles in Normandy, France

There are countless castles in France dotted across the countryside. Catherine shares 14 of the most beautiful castles in Normandy, France, including two castle hotels where you can stay in luxurious style.

Castles are popular destinations for all kinds of world travellers. If you love to marvel at architecture from eras gone by, experience history first hand, or simply stroll through unique locations, the castles of Normandy, France are excellent choices.

However, the Normandy castle options are also plentiful, and many travellers just don’t have time to see them all. By focusing on castles that genuinely capture the feel of the region and are remarkable landmarks for historical periods, you can make the most of the time you do have while visiting.

Where is Normandy, France?

One of 18 regions in the country and historically referred to as the Duchy of Normandy, the Normandy area of France is located in the northwestern section of the country. A significant portion of Normandy borders the English Channel, and the region featured heavily in battles during the Hundred Years War as well as World War II.

During the Hundred Years War, many castles near Normandy, France, were fortified, ensuring they could serve as strongholds during battles. This allows them to be monuments to architectural styles across several centuries, allowing you to see how the locations grew and changed over time.

The Most Beautiful Castles in Normandy

There are numerous castles in Normandy, France, and you could easily justify making a trip to nearly all of them. However, some are more striking than others or play more significant roles in history, increasing the odds that they should land on your must-see list if you want to experience the most beautiful castles Normandy has to offer.

Located in the city of Caen, Chateau de Caen is a Normandy castle classified as a historical monument in 1886. It was constructed in 1060 by William the Conqueror and is considered one of the largest castles in Western Europe.

Today, Chateau de Caen is home of the Musee des Beaux-Arts de Caen (the Museum of Fine Arts of Caen) and the Musee de Normandie (the Museum of Normandy). Saint George’s church, built by Henry I, William the Conqueror’s son in 1123, is also on site.

An 11th and 12th-century castle, Chateau de Creully has been altered over the years but is no less magnificent. It transitioned to a fortress design in about 1360, and much of the original architecture was demolished and reconstructed as it was traded between English and French hands over time.

Even with numerous changes over the years, the structure is absolutely breathtaking today. Plus, during warmer months, it is surrounded by colourful flowers, making the natural stonework even more wonderous to behold.

Another castle that changed hands several times throughout the Hundred Years War, Chateau de Falaise is the birthplace of William the Conqueror. The 12th to 13th-century structure overlooks the nearby town from a high crag, giving it magnificent views.

Featuring a fortress design and quintessential tower today, it is a must see for anyone visiting the region. Plus, it was listed as a historical site in 1840, and even sustained some damage during World War II (though three keeps remained untouched), making it ideal for history buffs.

This ruin, which is one of several medieval castles in Normandy, overlooks the River Seine and is just 25 miles from the city of Rouen. Construction started in 1196 with the support of Richard the Lionheart. While the undertaking was expensive, the majority of the work was finished in just two years.

Chateau Gaillard is one of the earliest castles in Europe to use machicolations, the openings in the wall that allowed those inside to pour hot oil, release boiling water, or drop stones on attackers.

The outer baileys remain open to the public all year while the inner bailey can only be visited between March and November.

A castle in ruins, Chateau de Conches-en-Ouche was originally built on a motte in 1034. During the Hundred Years War, the castle was the site of a bitter battle and changed between French and English hands several times.

Members of the Catholic League took refuge at the site in 1591. Since it severed as a possible base for enemies of the crown, it was demolished in the 16th century, though some of the structure remains.

A critical fortress for the Dukes of Normandy in the 11th and 12th centuries, Chateau de Gisors was actually built under the orders of William II of England. It features a stone keep and motte construction, an attempt to create a structure that would help keep the region of France secure.

Some of the initial structure was constructed in 1095. Reinforcement work was performed in 1161, converting some wooden portions of the structure to stone. The octagonal keep is thought to be one of the best-preserved examples of a shell keep in Europe.

A masterpiece of medieval design, Chateau d’Harcourt features the oldest arboretum in all of France and is considered to be one of the best-preserved castles as well. Over the years, enhancements and additions were added, including a curtain wall and nine round towers in the 13th century.

However, modernization in the 17th century saw segments of the original design demolished to make the site more habitable, allowing light to enter living spaces. However, it is still a wonder and was listed as a historic site.

The Fairy tower at Chateau de Gratot makes the trip to this castle incredibly worthwhile. The structure is only a few kilometres from the English Channel, and the castle itself even has a small bridge and moat, making it very picturesque.

Numerous towers and buildings were constructed on the site over the years, and an excellent exhibit near the entrance chronicles the “Eight Centuries of Life,” detailing the castle’s history and various restoration projects. Artistic events are also frequently hosted at Chateau de Gratot, along with an annual theatre production, allowing it to serve as a cultural center in the region.

One of few surviving examples of a square keep in Normandy, the town of Chambois was also the scene of a dramatic battle during the Normandy campaign, a battle which is detailed on neighbouring Hill 262. The structure of Donjon de Chambois is in remarkable condition, considering the area’s history, and serves as a prime destination for enthusiasts of 12th-century architecture and history fans alike.

Listed as a historic site in 1875, Chateau d-Arques-la-Bataille is a castle of Normandy currently owned by the state and largely in ruins. However, the location is sublime and what remains of the structure provides glimpses into 12th-century architecture and building.

Chateau d’Orcher was built to help protect the mouth of the River Seine. As a result, it features a striking square crenellated tower, which is remarkable to behold.

The castle was transformed into a residence in the 18th century but remains open to the public all year-round. Some areas, including the tower, have been restored over the years, most notably by architect P. Philippon in 1857.

Rouen Castle served as a fortified ducal and royal residence in the city of Rouen, which is the capital of the Normandy region of France. The structure features the Tour Jeanne d’Arc, part of the keep that remained mostly intact and was restored by Viollet-le-Duc, though much of the original structure was dismantled in 1591.

If you want to do more than visit a castle in Normandy, you are in luck. Some properties allow guests to book rooms in buildings that date back several centuries.

Guests at the Hotel Chateau De Sully can take in the magnificent 17th-century architecture while still being able to enjoy modern amenities. The location is incredibly stately, and those who stay on site have easy access to Bayeux city center and Omaha Beach.

Located five miles from Saint-Lo, Chateau de Canisy has all of the wonders of centuries-old architecture with modern conveniences. The massive stone structure is positioned on 300 hectares of parkland, with some rooms having water views. While it is a bit off the beaten path, it is an intriguing destination for anyone who wants to enjoy some opulence during their journey.

Catherine
Catherine Reed is our token American. Growing up in a military family, she had the opportunity to become a world traveler at a very young age. In total, she has spent time in 26 states and more than a dozen countries. She loves to explore local cuisines and unique landmarks, particularly those that relate to the darker side of history. She is a passionate writer and tech enthusiast, and currently calls Washington State home.
Latest posts by Catherine (see all)
Pin353
Share113
Tweet
Flip
Email