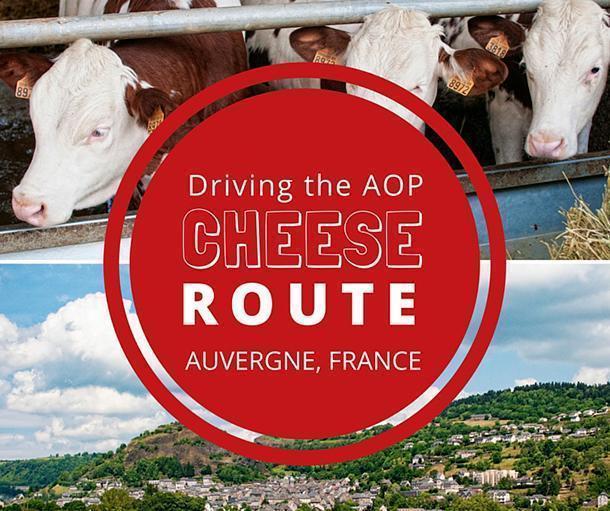 This entry is part 8 of 9 in the series CheeseWeb Tastes Cheese.
THIS POST MAY CONTAIN COMPENSATED LINKS. FIND MORE INFO IN MY DISCLAIMER.

We discover the five AOP cheeses of Auvergne, France at two of the region’s best cheese farms on the Route des Fromages AOP d’Auvergne.

There’s a lot to love about the region of Auvergne, France: the unspoiled nature, the dramatic, volcanic landscapes, unique cities, and luxurious, eco-friendly accommodations. It quickly became one of our favourite slow travel destinations ever. But the truth is, before we visited, we knew next to nothing about Auvergne. In fact, the only thing we associated with the name Auvergne was cheese. (And as you know, here at CheeseWeb, that’s not an insignificant thing.)

Before living in Europe, I would try just about any cheese I could get my hands on – except blue cheese. There was just something about eating mold that seemed wrong; until a French chef friend encouraged me to try Bleu d’Auvergne. It was my ‘gateway’ blue cheese and to this day, while I gobble down Roquefort, Danish Blue, and Stilton, Bleu d’Auvergne remains my go to blue. For me, a cheese pilgrimage to the home of my first blue cheese love was even bigger than visiting Camembert.

The AOP Cheeses of Auvergne, France

When researching where to find the best of Auvergne’s cheese, I discovered there was more to the dairy scene than just my preferred blue. In fact, Auvergne is home to five AOP (appellation d’origine protégée) cheeses, including Blue d’Auvergne. Of the remaining four, I had previously tasted Salers and Cantal, but the creamy Saint-Nectaire and blue Fourme d’Ambert were new to me.

It sounded like a cheese tour was in order. Luckily for us, Auvergne has its very own cheese route (just another reason to love France). The Route des Fromages AOP d’Auvergne includes 40 stops at which to experience the 5 AOP cheeses of the region. So, armed with our cheese route map, we pointed our motorhome, Amelia, at Auvergne’s backroads and set off on another cheesy adventure.

Driving through Auvergne, it’s not hard to see why the cheese is so incredible here. There are more cows than people, it seems, and with all the beautiful rolling fields filled with wild grasses and flowers, they look to be happy cows indeed.

Our first cheese-related stop was in the village of Aurières, at the Ferme Randanne, to taste the new to us, Saint-Nectaire.

The happy cows at Ferme Randanne

This small farm is one of the most efficiently run we’ve seen. Thirty cows of the Montbéliarde and Abondance breeds dine on 60ha of pasture. In fact, the entire production of Saint-Nectaire cheese is tiny, with only 1800km2, it’s one of the smallest productions in Europe.

After visiting the lovely bovine ladies munching happily in the barn, it was time for a tasting. Ferme Randanne offers a variety of different cheese tasting opportunities for groups, individuals, and even schools. In addition, they run a small gite with rooms and a table d’hôte for meals. But we were here to taste the AOP Saint-Nectaire.

This round, creamy cheese has a texture somewhat like a brie with a harder rind. It is aged for at least 4 weeks and has a nutty flavour reminiscent of hazelnuts. We couldn’t resist buying some to take with us.

Ferme Randanne also produces Fourme d’Aurieres, a harder cheese, and the Gaperon Fermier, a rustic cheese with garlic, pepper, and salt, which has a uniquely delicious flavour.

Our next cheese tasting would cover the four remaining AOP cheeses of Auvergne in one delicious go. We headed to the beautiful village of Murat and then on to tiny Pignou, in Albepierre-Bredons. We parked beside La Grange de la Haute-Vallée and stepped inside the lovely tasting room and cheese shop, where we were greeted by the mistress of cheese, Nathalie Meironen.

But before we could taste, we wanted a look around. Nathalie obliged by showing us around her modern, yet historic, farm. The 40 Montbéliarde cows have an incredible view here, and even have their own tunnel to take them under the busy road to another pasture on the hillside.

I admit, I was giddy when Nathalie offered to show us around the cheese production facility. She pointed out cheese curds draining their moisture before leading us into the aging rooms. Here, shelves of Salers and Cantal sit, quietly aging to perfection.

Next door, the blues are becoming deliciously mouldy. Nathalie showed us the special press used to prick holes in the blue cheeses. These holes allow air inside the cheeses which contribute to that tasty, tasty mold.

The blue cheeses are ripening slowly with the ‘cheese stabber’ in the background.

Nathalie wouldn’t lock me inside with her precious cheeses, but she did offer us a cheese tasting in the tasting room. She presented us with a platter of cheeses and began to describe each tasty morsel.

I reached for the Salers. This is a hard mountain cheese aged for at least three months. Traditional Salers is made from the milk of the red Salers cows who roam the volcanic mountains of Auvergne. It has a texture almost like an aged cheddar and a definite bite to the flavour. Delicious!

From there, I moved on to the Cantal. I had tried Cantal a number of times, purchased from various supermarkets, and found it rather bland. The Cantal at La Grange de la Haute-Vallée was anything but. In fact, the farm produces three different Cantals: a young (aged 1-2 months), an old (aged more than 8 months), and an ‘Entre-Deux’ which falls between the two (aged 3-7 months). While all three were excellent, the Entre-Deux was our favourite. Cantal has been produced in the same way in Auvergne for 2000 years – and it shows in the quality and perfection of the cheese.

Next, it was time to turn my attention to the blue cheeses. Fourme d’Ambert is a mild blue cheese aged for at least 28 days. It is creamy and delicate with a salty tang. It’s the perfect blue cheese for those who don’t like the bold bite of the majority of blues.

Finally, I was ready to try the cheese that brought me here. The bleu d’Auvergne was everything I hoped it would be. When you first taste it, the cheese is deceptively creamy and mild, but then it becomes assertive and intense. Bleu d’Auvergne is aged for at least 4 weeks, during which time it develops its character and strong flavour. It pairs magically with a sweet white wine, like Jurancon, making just about the perfect dessert in my book.

Orange is excited about the cheesy picnic offerings.

We definitely didn’t leave La Grange de la Haute-Vallée empty handed. Nathalie filled our fridge with farm-fresh yogurt and heaps of cheese. As we were already stocked with some local charcuterie and fruit, we decided to end our cheese adventure in Auvergne with a picnic and an incredible view. Luckily, Auvergne is the perfect place to find both.

Great picnic views are a given in Auvergne, France

We’d like to thank the Ferme Randanne and La Grange de la Haute Valley for taking the time to tell us about the AOP cheeses of Auvergne. We’d also like to thank the Région Auvergne Tourism office for hosting us in the area. As always, all opinions are our own.

Alison Cornford-Matheson
Alison Cornford-Matheson is a Canadian travel writer, author, and photographer. She is the founder of Cheeseweb.eu, a website dedicated to slow and sustainable travel, off-the-beaten-path destinations, and cultural awareness through travel. She and her husband, Andrew, are the founders of RockFort Media, committed to helping entrepreneurs tell their stories online. Alison has visited over 45 countries and, after living in Belgium for 11 years, now lives full-time in a Bigfoot motorhome named Yeti with Andrew and their well-travelled cat.
Latest posts by Alison Cornford-Matheson (see all)
Pin262
Share76
Tweet7
Flip
Email
Read more from this series...
Series: CheeseWeb Tastes Cheese