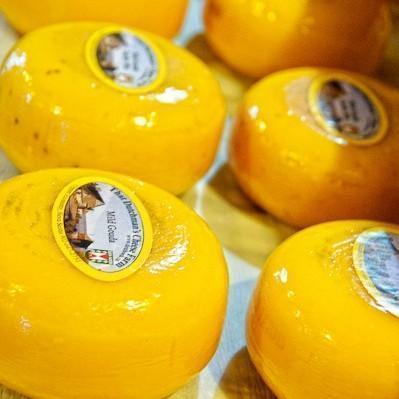 This entry is part 4 of 9 in the series CheeseWeb Tastes Cheese.
THIS POST MAY CONTAIN COMPENSATED LINKS. FIND MORE INFO IN MY DISCLAIMER. 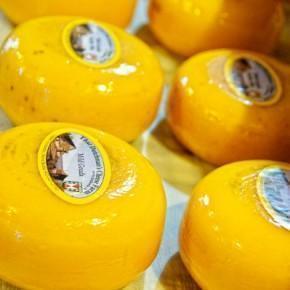 Canada’s Maritime Provinces were founded by European immigrants. While most were French or English, you can find a taste of Dutch and German cuisine in restaurants and farms, near our hometowns.

The vast majority of Canadians are descended from immigrants. It may have been 3 or 4 generations ago, but one or more of our (great-great) grandparents stepped onto a ship, bound for a new start in the New World.

Our hometowns of Saint John and Halifax, in Canada’s Maritime Provinces, are mostly populated with descendants from European immigrants, the majority being Scottish, Irish, English, and French. However, particularly in the agricultural sector, you can also find Dutch and German families. On our last visit home, we had a taste of both.

One of our first experiences in the Netherlands was visiting a cheese farm. (It’s even how CheeseWeb got its name!) But even before our first expat experience, we were enjoying Dutch cheese.

Every weekend, we would visit the Halifax farmers’ market and head straight to That Dutchman’s cheese stall. There, behind rows of delicious flavoured Gouda cheeses, would be a large, bald, bearded fellow, with a smile and a plate of cheese samples – That Dutchman, himself, Willem van den Hoek.

Willem and his wife, Maja, left the Netherlands as newlyweds in 1970, and landed in British Columbia. Later, they travelled to the opposite end of Canada and settled in Upper Economy, Nova Scotia. There, they built a thriving cheese farm, known throughout the province. 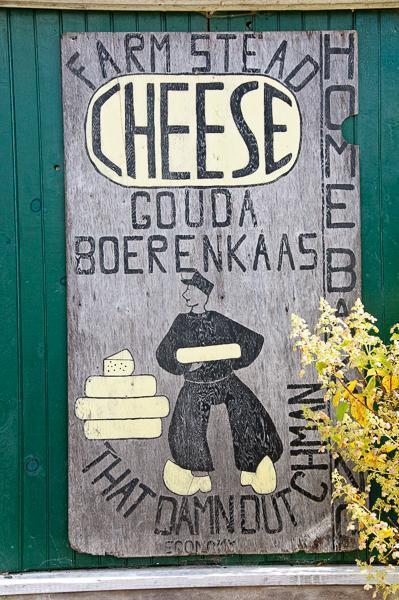 Despite our weekly visits to the Dutchman’s market stall, we had never visited the Den Hoek’s farm. Last October, while visiting home, we piled into the car, with Andrew’s parents, and made a trip to find the home of That Dutchman’s cheese.

Perched on a hill overlooking the Cobequid Shores of the Bay of Fundy, it’s easy to see why the Den Hoek’s chose this spot to settle. They have a stunning view. But, for me, the view inside their farm shop is even better – cheese, cheese and more cheese. 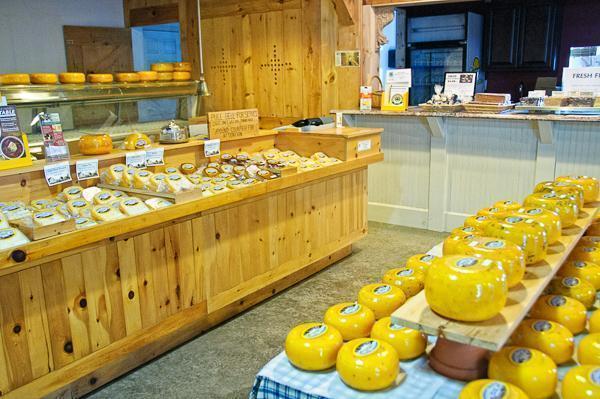 That Dutchman produces a variety of Gouda: young, aged, smoked, and with a variety of added spices. But my two favourite products are not round wheels of cheese. 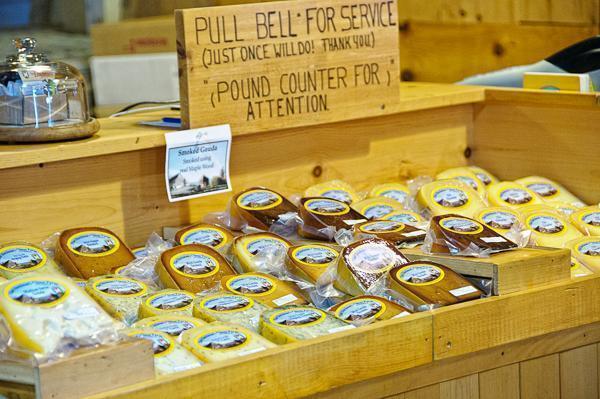 Gouda in all varieties: aged, smoked, and with herbs and spices.

The first is Smeerkaas, spreadable Gouda in a jar. Smeerkaas also comes in a variety of flavours and is delicious spread on bread or crackers. I particularly like the smoked and hot pepper versions. 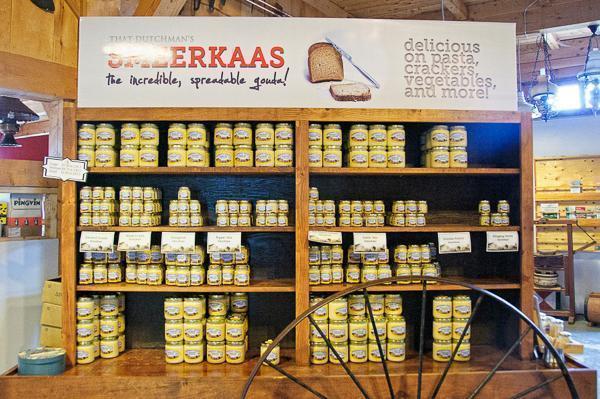 But, above all, I adore That Dutchman’s Dragon’s Breath blue cheese. This slightly stinky, somewhat runny and ever so delicious cheese comes encased in a blob of blue wax. You slice off the top, scoop out a chunk and enjoy. Heaven!

If you visit the Den Hoek farm, in nicer weather than we did, you can enjoy the walking trails and visit the menagerie of animals: goats, rabbits, pot-bellied pigs, emus, and Highland cattle. Or you can stock up on picnic goodies for a lovely lunch on the beach.

If you can’t make it all the way to the Fundy coast to visit That Dutchman’s farm, you can still pick up his marvelous cheeses at the Halifax Seaport Farmers’ Market.

My parents have been raving about ‘the German restaurant’ for years now, but Andrew and I have never made it there on our visits home. We were beginning to think Gasthof Old Bavarian Restaurant was only a legend. On our last trip to New Brunswick, we finally visited for ourselves.

Getting to Gasthof is quite a trek. The nearest town is Sussex, New Brunswick (about an hour from my parents’ home in Saint John.) Once you reach Sussex, you still have to drive for half an hour… deep into the New Brunswick woods. And believe me; New Brunswick has a lot of woods. 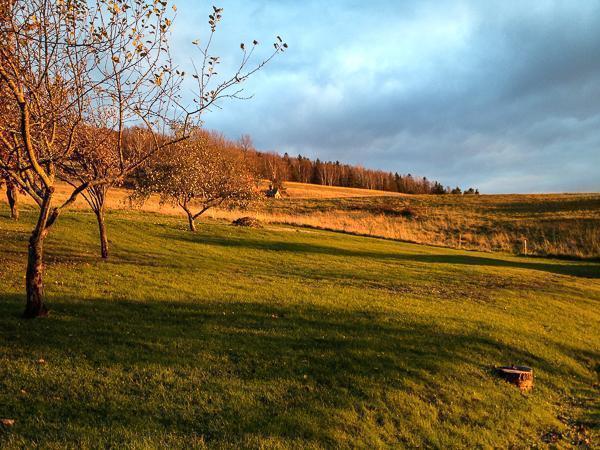 A clearing in the woods reveals the farm’s rolling hills.

Just when Andrew and I were starting to suspect my parents had completely fabricated ‘the German restaurant,’ it appeared through the trees – a slice of Bavaria in Atlantic Canada. 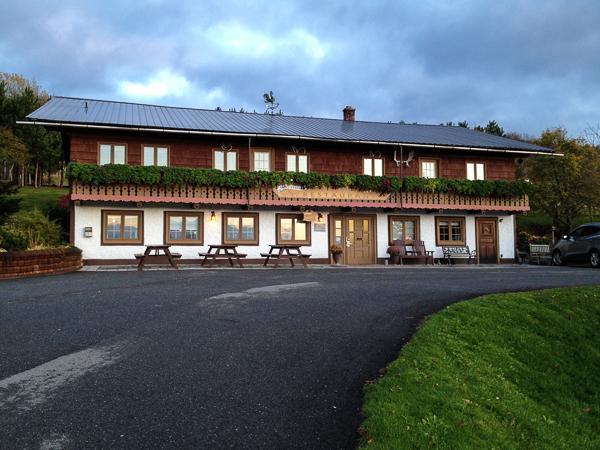 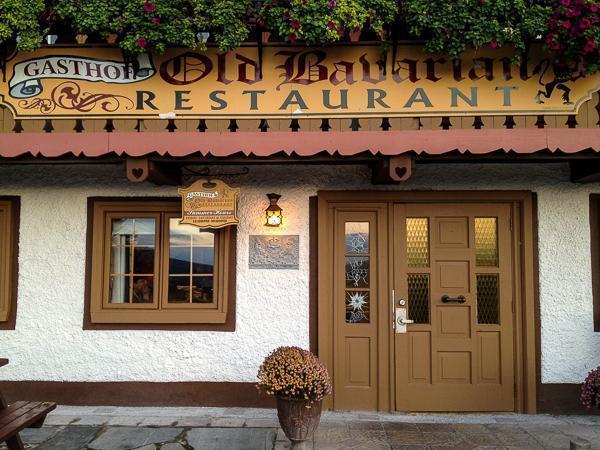 The restaurant is owned and run by the Giermindl family. Adolf and Olga Giermindl immigrated to Canada in 1976, with 9 of their 11 children. The New Brunswick landscape reminded them of Bavaria, so they bought and restored a farm property and settled in. The farm produces poultry, eggs, pork and beef and grew to include a butcher shop, and the restaurant. Adolf passed away several years ago, but his enterprise lives on and is run by his wife and three of his daughters.

As you might guess, the Gasthof Old Bavarian restaurant serves authentic Bavarian cuisine, featuring produce raised on the farm. Homemade sausages and schnitzel are specialities and Andrew was thrilled to find his favourite German dish, Schweinshaxe (or roasted pork knuckle). 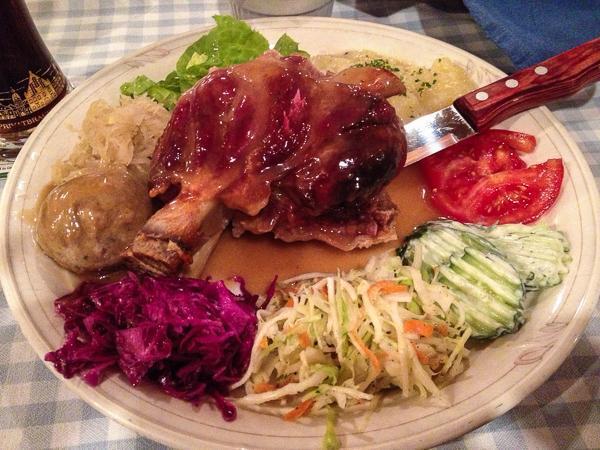 Although it’s not strictly German, I couldn’t resist the Hungarian Gulasch with Spätzle. 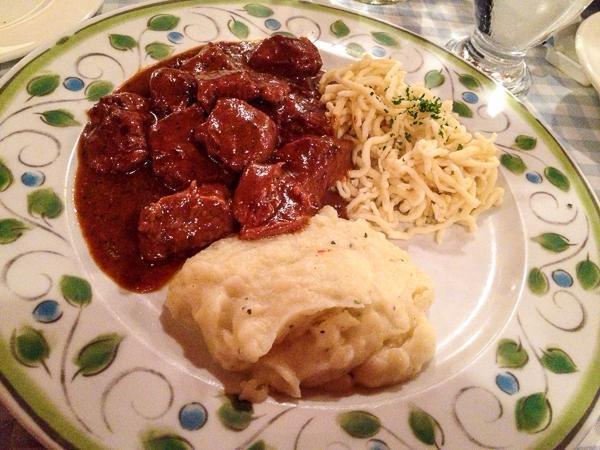 My Hungarian Gulasch with Spätzle

If you can make it through your main course (we couldn’t), there are homemade desserts. My parents speak in hushed, reverential tones about the Black Forest Cake.

The portion sizes were enormous, including giant glasses of German beer, and we practically had to roll ourselves out the door. Everything was scrumptious.

The restaurant is only open on weekends (Friday-Sunday) and it is strongly recommended to make reservations. (You don’t want to drive all the way out there for nothing!) It is cash only, so come prepared.

There are plenty of reasons to visit Eastern Canada and our multicultural heritage will make our European visitors feel right at home. For more great restaurants around the world, check out our Restaurant Review page.