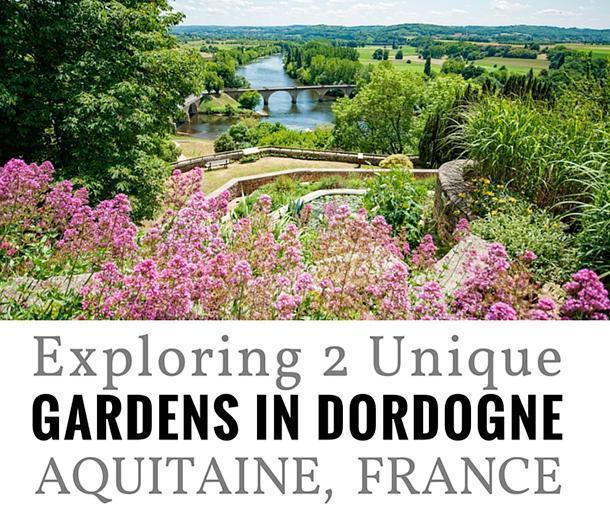 Dordogne, France is known for its many beautiful castles and chateaux. Often, where there are castles there are also gardens and the Dordogne department of Aquitaine is no exception. During our stay in the area, we discovered two unusual gardens well worth exploring.

Our first garden adventure took us to the Plus Beaux Village of Limeuil. Even without the garden, Limeuil is worth visiting. It’s your stereotypical hilltop village simply oozing French charm. As we hiked to the top in the blazing sun, we couldn’t help but joke about how ‘ugly’ France can be. I mean seriously… 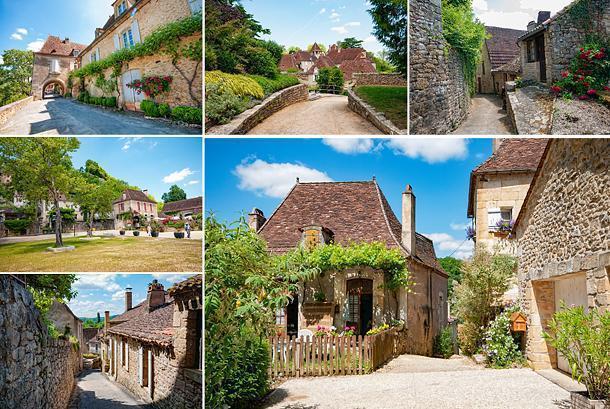 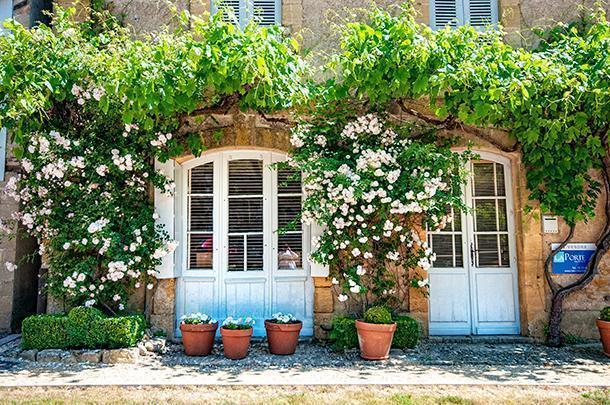 Roses and prettiness everywhere you look in Limeuil, France 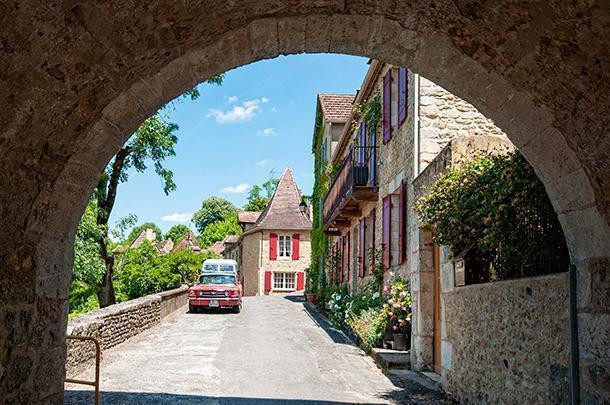 The Plus Beau Village of Limeuil, in Dordogne, France

As the garden is closed during lunch, we decided to enjoy a bite to eat before our visit. The Au Bon Accueil B&B and Restaurant tempted us with a shady terrace and an affordable lunch menu. The service was warm, the food was fresh and delicious, and the setting was perfect. 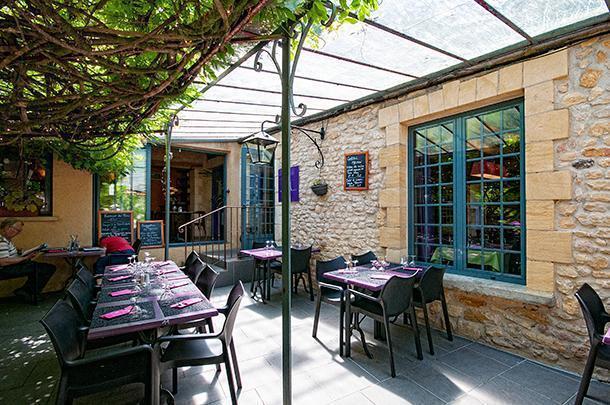 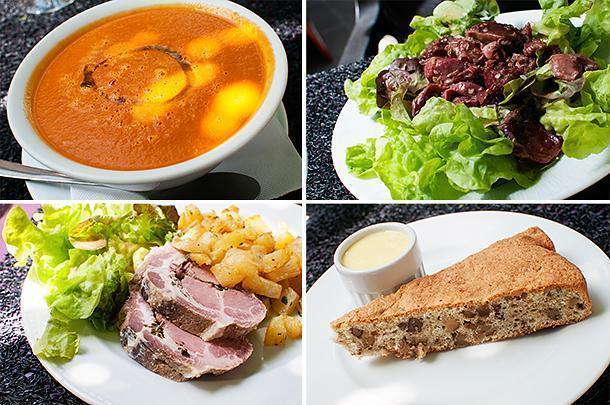 Adequately fuelled and ready to go, we finished the hike to the very top of the village. (The people who live here must have buns of steel!) There we found the Jardins Panoramiques de Limeuil, with its sweeping view of the Dordogne and Vézère rivers. 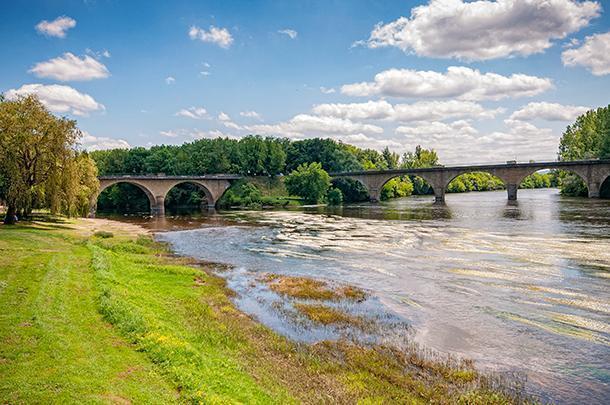 The confluence of the Dordogne and Vézère rivers gave Limeuil its strategic importance.

This is far from a typical French garden. The main building, once a private home, was purchased in the 19th century by the former doctor of the Sultan of Morocco. When he retired, Dr. Linares wanted to create a Moroccan-style garden. 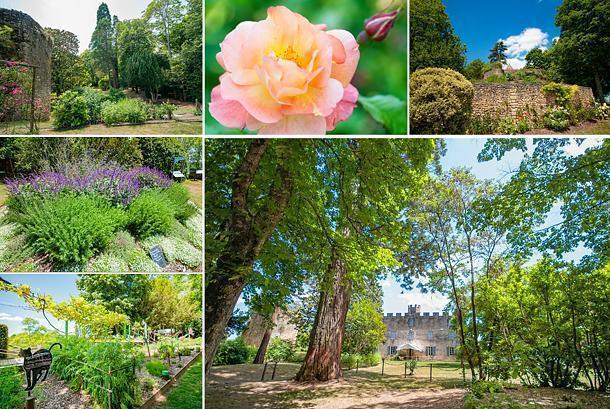 In 2004, the municipality and heritage association, Au Fil du Temps, took over the property and rehabilitated it into the Jardins Panoramiques, or Panoramic Gardens of Limeuil.

Above all, the Jardins Panoramiques are here to educate and share ideas. Rather than one large garden, it is a series of smaller themed gardens visitors follow along a sign-posted pathway. There is a medieval garden, colour garden, gourmet garden, water garden, and even a witch garden. They are interactive, educational, and family-friendly. 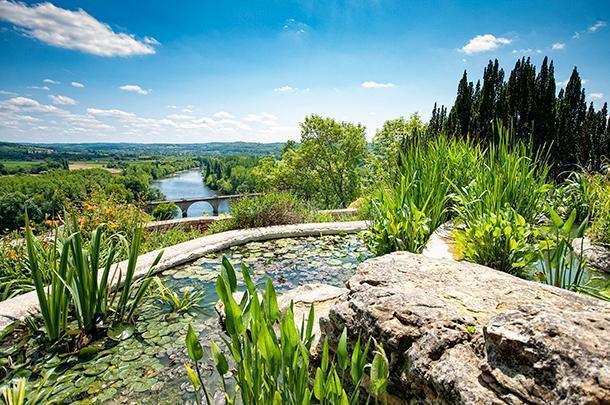 The water garden at the Jardins Panoramiques have a stunning view 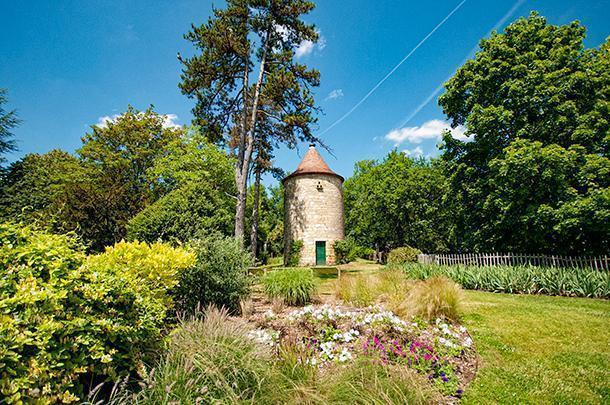 This tower hosts a giant bee hive with windows for viewing the workers safely.

Visitors are given a guidebook (available in English) explaining the history of the garden, but also the history of Limeuil and its importance as a trading point at the confluence of two major rivers. 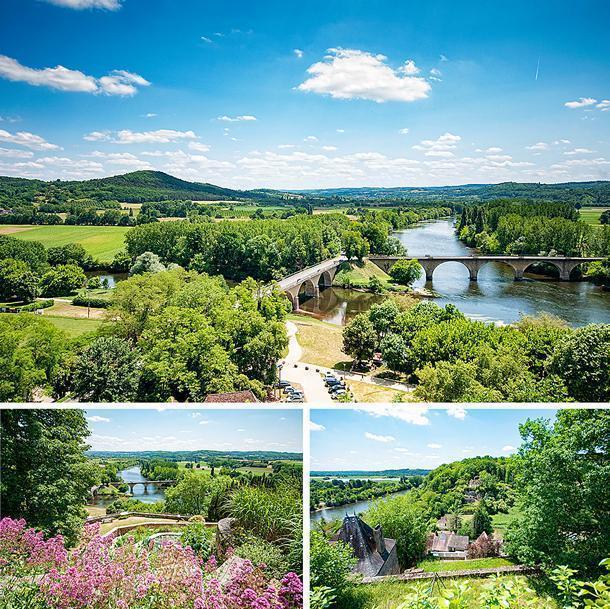 Of course, one of the highlights of the garden is the namesake panoramic view of the rivers and valleys. The view alone is worth the price of admission.

While the gardens in Limeuil had been recommended to us by a local, the Suspended gardens of Marqueyssac were completely my idea. While researching Dordogne, I stumbled across photos of the unique sculptured hedges of Marqueyssac and wanted to see them for myself.

Marqueyssac is not an off-the-beaten-path destination. While we had the gardens in Limeuil almost to ourselves, Marqueyssac was already busy when we arrived early in the morning. In fact, it’s the most visited garden in the Dordogne-Perigord area. What’s unusual about this is there is hardly a flower to be seen. 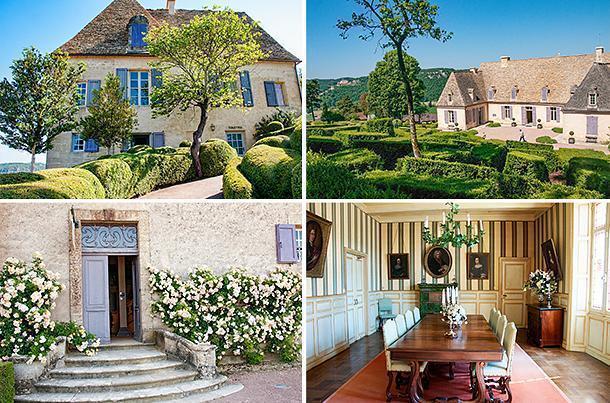 Marqueyssac is an architectural garden and a walking garden. Like Limeuil, one of the garden’s most striking features is its views. The sweeping vistas take in farmland, the river valley, and a number of the Dordogne’s castles. While we had previously seen Beynac and Castelnaud castles from above by hot-air balloon, at Marqueyssac we were on the same level. 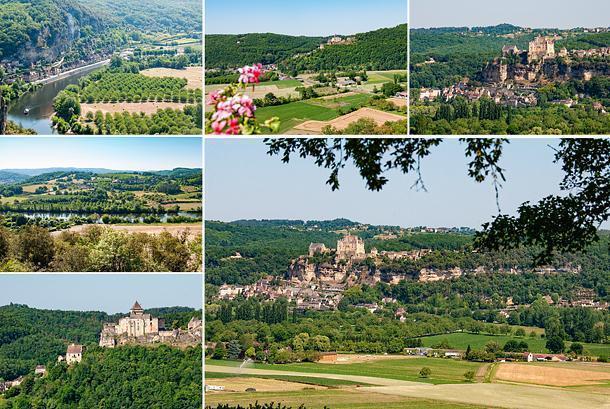 Beynac and Castelnaud castles can be spotted from Marqueyssac Gardens

The other main feature of Marqueyssac garden is its boxwood hedges. These hedges, planted in the 19th century, have been shaped and sculpted into sensuous curves and lead visitors down a series of paths. 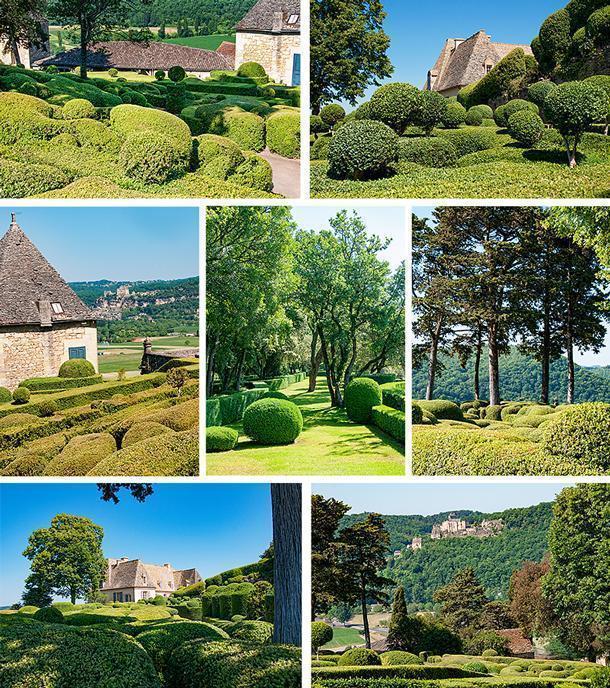 The garden is designed around three main walking routes; one on either side of the hilltop and one down the middle of the garden. The paths lead from the entrance and the sculpted hedges to a belvedere with more stunning views. This is a garden made for walkers, with over 6km of pathways through art installations and shady woodland. 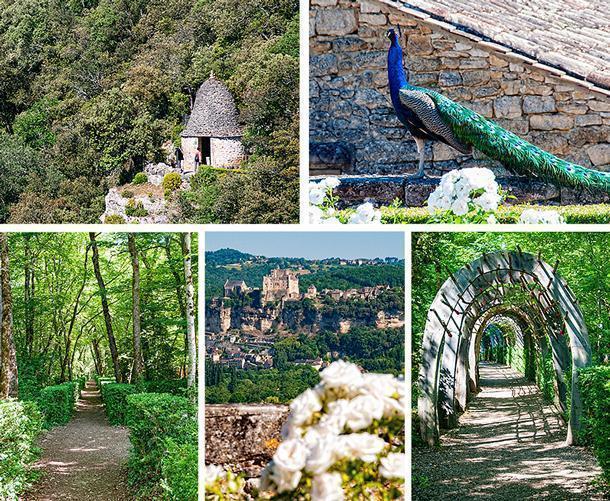 There is plenty to see and do at Marqueyssac Gardens in Dordogne, France

While we found the views and the shady pathways inviting, for me, it’s the boxwood hedge garden that steals the show. There are more than 150,000 boxwoods, hand sculpted by a team of gardeners, who we saw hard at work on the morning we visited. My only wish was for the ability to see this garden from above and fully admire the expanse of sculpted hedges. 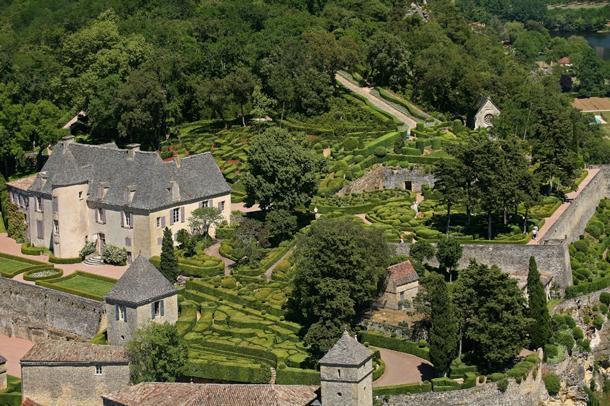 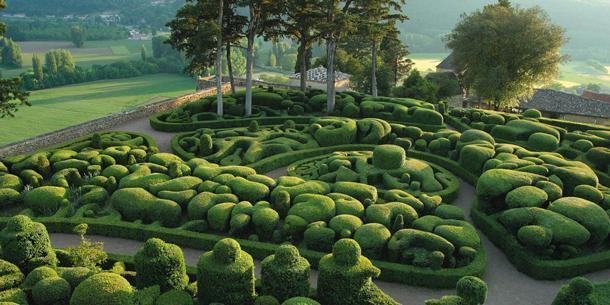 Both of these unique gardens in Dordogne are well worth visiting. Carve out, at least, two hours each and be prepared to do a fair amount of walking. Enjoy the gardens themselves but be sure to take the time to admire the stunning views of the Dordogne-Perigord department, in Aquitaine, France. 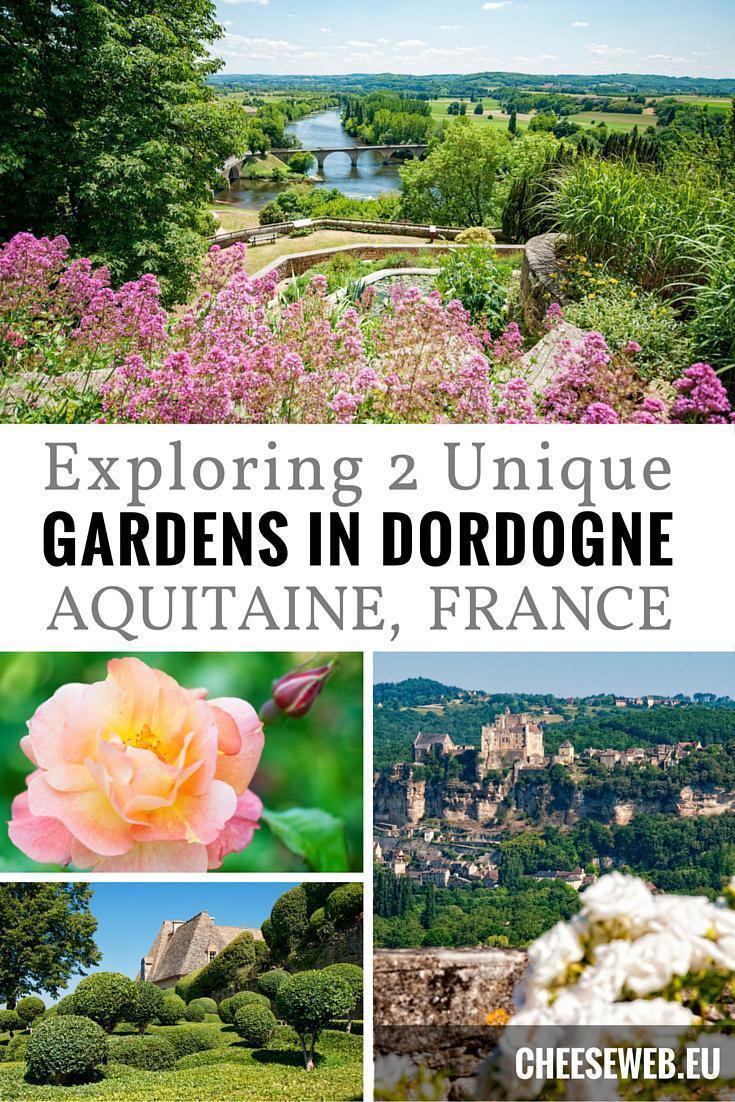 Want to save this article? Pin it to Pinterest!