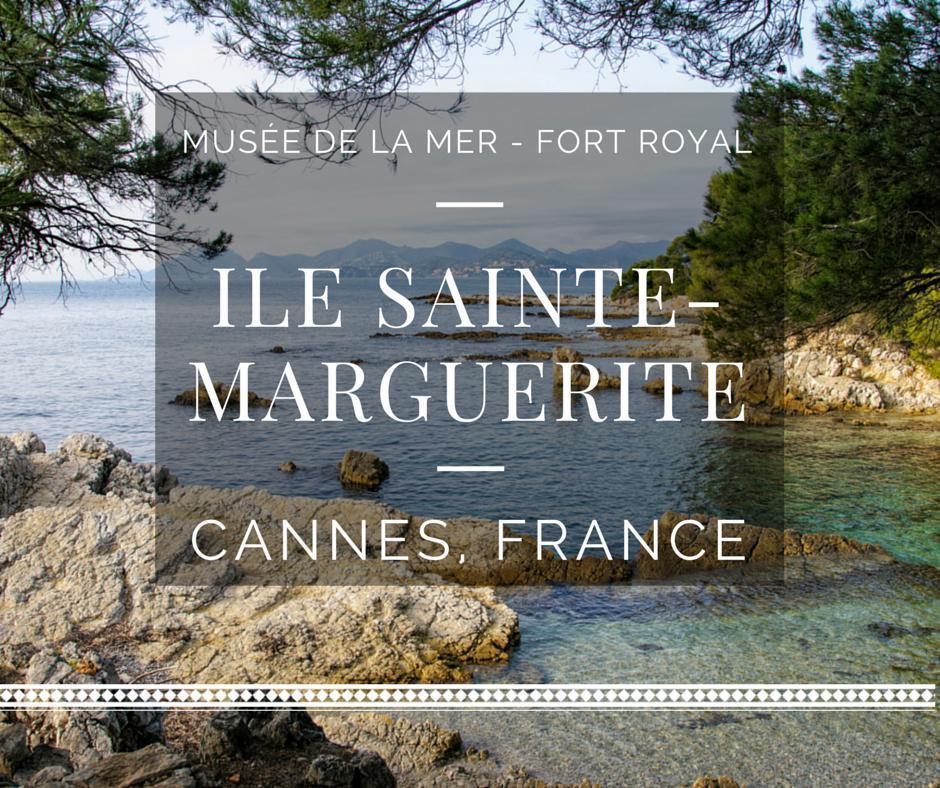 This entry is part 5 of 5 in the series BluBloggers.
THIS POST MAY CONTAIN COMPENSATED LINKS. FIND MORE INFO IN MY DISCLAIMER.

Ile Sainte-Marguerite, off the coast of Cannes, France, is the perfect slow travel escape from the busy French Riviera. Here you’ll find nature, history, and a few surprises.

When you think of the glitzy Mediterranean city of Cannes, on the French Riviera, it’s probably not as an ideal slow travel destination. However, just a few minutes from the multi-million-dollar yacht-choked harbour is a peaceful getaway about as far from Hollywood glamour as you can get.

When I visited Cannes, as a Radisson Blu Blogger, last November, I hadn’t anticipated having an entire morning to do as I pleased. Luckily, my fellow blogger, Emma, had a plan. She had read the Ile Sainte-Marguerite was a quick boat ride from Cannes harbour, and this tiny island had been home to the Man in the Iron Mask. A Mediterranean island with a mysterious past – count me in for the adventure!

We rose early the next morning and were graced with clear skies and warm weather – a far cry from late November in Brussels!

We didn’t have far to go to catch our ferry. In fact, the ferry terminal is directly across the street from the Radisson. We could see Ile Sainte-Marguerite waiting for us in the distance. Despite being a sunny Sunday morning, there were few other passengers waiting for the boat. We seemed to be the only tourists in sight. The quick trip took only fifteen minutes and offered us beautiful views of the Cannes waterfront.

However the view of Cannes from the ferry was super!

Landing on the island, the small group of passengers quickly dispersed and we were left to our own devices. As Fort Royal, home of the Musée de la Mer and the cell of the Man in the Iron Mask didn’t open for another few hours, we decided to take a little tour of the island.

Ile Sainte-Marguerite is only 3km long but has more than 20km of walking trails.

We opted to walk along the shore and felt as if we had the 3km long Ile Sainte-Marguerite entirely to ourselves. The early morning light was beautiful and resulted in many (many) photos.

It felt like we had Ile Sainte-Marguerite all to ourselves

Just look at that light

Birds, drivers, and fishermen were the only others around

A perfect spot for a quiet picnic

Along the way, we spotted signs to a bird sanctuary. Sure enough, just inland from our beach was a peaceful lagoon filled with birds. In the distance, we could just spot the Cannes skyline, but it felt a world away.

Cannes is in the distance, but it feels miles from this quiet bird sanctuary

After bird watching for some time, under the shady canopy, we headed inland to cut through the centre of the island, toward Fort Royal. The tree-lined pathways were nearly silent.

The walking paths were lovely, and the trees were stunning

In fact, during our entire visit to Ile Sainte-Marguerite, we only spotted half a dozen other people. Clearly, it was the low-season and the few island shops, and restaurants were tightly shuttered. Still, with such a beautiful green space, so close to the city, we couldn’t imagine why no one was taking advantage of it on such a warm, clear Sunday.

At last, we had come to the opposite corner of the island and could see Fort Royal towering above us. It was easy to see why escape from a prison cell here would be hopeless. The bastion clings to a cliff, with a sheer drop to jagged rocks below, and the solid stone walls of the state prison look impenetrable.

Fort Royal – How the heck do we get up there?

For us, the only problem was, how do we get into the fort?

After navigating a series of tricky slopes and concrete stairs, we stumbled on a colony of feral cats, being fed by one of the 20 or so island residents. Both being crazy-cat ladies, we were a little less upset by our extended detour, in exchange for some kitty photography.

Playing hide and seek with the feline residents of the island

Finally, we found the entrance gate and stepped into a little, fortified village, including a chapel, sleeping quarters and a well. At the far corner, sits the Musée de la Mer, in the former prison.

Finally, we spotted the gate to Fort Royal

Among other things, the fort serves as a youth hostel in the summer

One side of the museum remains as it was during its prison days. You can visit the cell of the Man in the Iron Mask, first made famous by Voltaire and Dumas, and much later by Hollywood. Still, no one knows his true identity.

This cell was home to the Man in the Iron Mask. It’s pretty bleak.

Several other cells also remain and tell the stories of some of the other residents here. Most strikingly, they are decorated with brightly coloured murals – a glaring contrast for the stark conditions here.

It was the rest of the Musée de la Mer, however, I found the most fascinating. Long before the island was a prison, it was home to Roman explorers who created a complicated cistern to gather fresh water from the island. The museum houses recreations of the cistern, thermal baths, and the hydraulic system that kept the water flowing.

In Roman times, this area was an important shipping hub; however, the waters off the coast of Ile Sainte-Marguerite were treacherous and resulted in many sunken ships. Many of these wrecks are still sitting on the sea floor but are recreated inside the Musée de la Mer to demonstrate just how loaded down these vessels were.

The Musée de la Mer only takes an hour or so to explore and is an interesting overview of the importance of this little island.

The Ile Sainte-Marguerite is a perfect, peaceful day-trip from the glitz and glamour of Cannes. Although busy in the summer months, it’s virtually deserted in the off-season. Do yourself a favour and enjoy a day in nature and history on this beautiful Mediterranean island escape.

Alison Cornford-Matheson
Alison Cornford-Matheson is a Canadian travel writer, author, and photographer. She is the founder of Cheeseweb.eu, a website dedicated to slow and sustainable travel, off-the-beaten-path destinations, and cultural awareness through travel. She and her husband, Andrew, are the founders of RockFort Media, committed to helping entrepreneurs tell their stories online. Alison has visited over 45 countries and, after living in Belgium for 11 years, now lives full-time in a Bigfoot motorhome named Yeti with Andrew and their well-travelled cat.
Latest posts by Alison Cornford-Matheson (see all)
Pin922
Share25
Tweet
Flip
Email
Read more from this series...
Series: BluBloggers