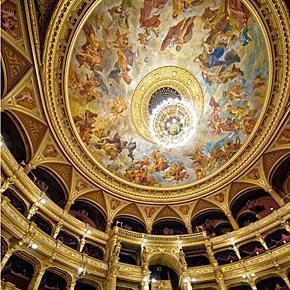 This entry is part 8 of 8 in the series Euro Summer 2013.
THIS POST MAY CONTAIN COMPENSATED LINKS. FIND MORE INFO IN MY DISCLAIMER.

Visiting Budapest’s beautiful Hungarian State Opera House was a spontaneous decision. We wanted to compare it to our experience at Paris’s Opera Garnier and we’re glad we did.

The last stop on my European tour, with my friend, Jenn, last summer, was Budapest, Hungary. When we weren’t soaking in the Gellert Baths, and exploring the Danube Bend, we spent much of our time wandering the city streets.

Not far from our apartment was the fashionable Andrássy Avenue (Andrássy út), lined with luxury boutiques, the likes of which we could only afford in our dreams, stylish cafes, and a wine bar or two, we enjoyed frequenting. On this street filled with stunning architecture, one building stood out however, the Hungarian State Opera House.

After our awe-inspiring visit to the Paris National Opera, we decided, on a whim, to compare Hungary’s opera house to its Parisian counterpart. Once again, we were impressed by our discovery.

Budapest’s opera house is home to the Hungarian National Ballet who, unfortunately while we were visiting, was on summer break. Luckily, the State Opera House is open to the public for guided tours throughout the year. We joined an English tour group and were able to have a look around.

With 1261 seats, today, the Hungarian State Opera House is the largest in Hungary, (although at one point it was only the second largest). It was built in 1875 with funds from both the city of Budapest and Emperor Franz Joseph of Austria-Hungary. When it opened in 1884 it was known as the Hungarian Royal Opera House.

The opera house’s design is a mix of Neo-Renaissance with a dash of baroque opulence, definitely fit for royalty. In fact, the royals had the best seat in the house, with a Royal Box located smack in the centre of the three story circle. The auditorium is draped in rich red velvet and every non-fabric surface is painted shining gold.

Fit for royalty – The big archway in the centre is the Royal Box.

Like the Paris Opera, the ceiling was decorated with a huge chandelier encircled by a fresco. The Hungarian Opera’s ceiling was much more classical however, with its depiction of Greek gods on Olympus by artist Károly Lotz.

The auditorium’s acoustics are said to be the third best in Europe, after La Scala in Milan and the Palais Garnier in Paris.

The decoration extended to the foyer, with marble columns and more murals depicting the nine muses.

Just look at all of those incredible ceilings!

The main entrance has the obligatory grand staircase so the 19th century ladies could show off their trailing ball gowns to grand effect.

I could sawn down these stairs in a ball gown…

The exterior of the Hungarian State Opera House is also intricately decorated. Two of the country’s famous composers are commemorated in statues at the main entrance. Ferenc Erkel composed the Hungarian National Anthem and was the opera house’s first director. He is joined by Franz Liszt, Hungary’s most well-known composer.

After our tour of the opera house, we admired the stunning façade from the terrace of the lovely Callas Restaurant, next door. The restaurant’s interior is almost as opulent as the opera house and, although it was a bit of a splurge, the food and wine was excellent.

The dramatic façade, best admired with a glass of Hungarian wine.

So, how did the Hungarian State Opera compare to the Paris Opera? Both were extravagant and fascinating to visit. I slightly preferred the Paris Opera, mostly because of the Marc Chagall ceiling. I’m certainly glad we took the time to tour the Hungarian State Opera House while we were in Budapest. It would be wonderful to return one day and actually take in a performance in this spectacular setting.

Alison Cornford-Matheson
Alison Cornford-Matheson is a Canadian travel writer, author, and photographer. She is the founder of Cheeseweb.eu, a website dedicated to slow and sustainable travel, off-the-beaten-path destinations, and cultural awareness through travel. She and her husband, Andrew, are the founders of RockFort Media, committed to helping entrepreneurs tell their stories online. Alison has visited over 45 countries and, after living in Belgium for 11 years, now lives full-time in a Bigfoot motorhome named Yeti with Andrew and their well-travelled cat.
Latest posts by Alison Cornford-Matheson (see all)
Pin38
Share21
Tweet6
Flip
Email
Read more from this series...
Series: Euro Summer 2013