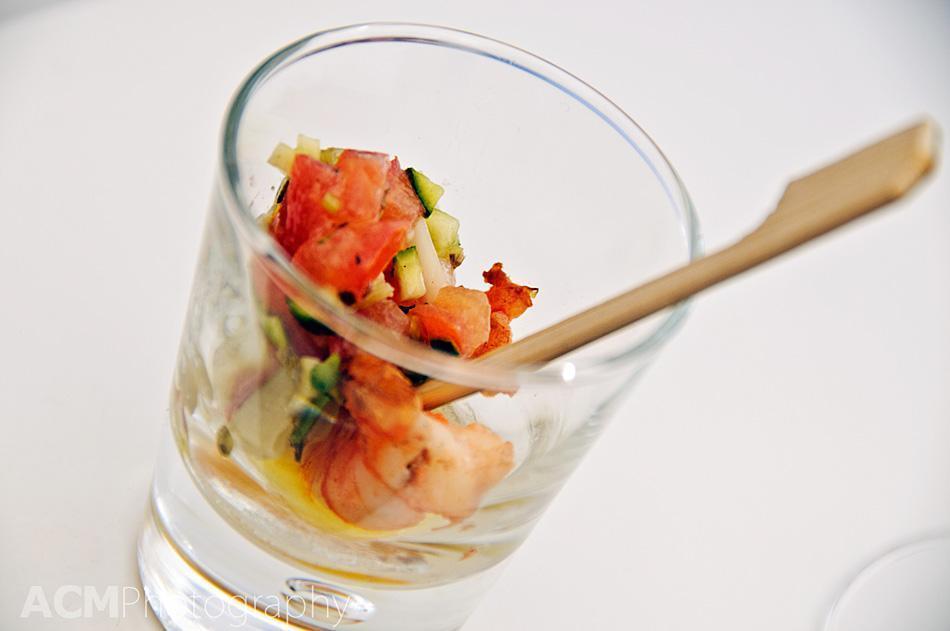 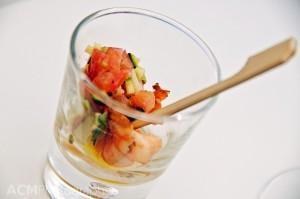 Culinaria – Heaven for foodies in Brussels

What do you get when you take two Canadians, an American and a Frenchman, add a couple dozen of Belgium’s best chefs, and mix it all with generous amounts of food and wine? Culinaria2 – or a really great way to spend a Sunday afternoon in Brussels.

When Andrew first read about Culinaria2 and passed the website along to me, it sounded a bit too good to be true. For 39 euro (a discount received through Andrew’s Thalys card) we would get access to the event and a four course meal, including drink pairings. We weren’t sure what to expect, but we decided to drag some friends along to check it out.

Arriving at Tour & Taxis, we were greeted with a long line of hungry people. It didn’t take long for the queue to deposit us inside, where we were given tickets for each of our four courses.  We had a choice of four different menus (chosen during ticket booking). The gents had both chosen menu #1 and we ladies opted for menu #2.

We stepped into the event area and were immediately handed tokens for a free drink each, at the Campari booth. Two steps later, we were ushered into a booth promoting Rosé from Provence. Two generous glasses later, we decided food might be a good idea before we continued. 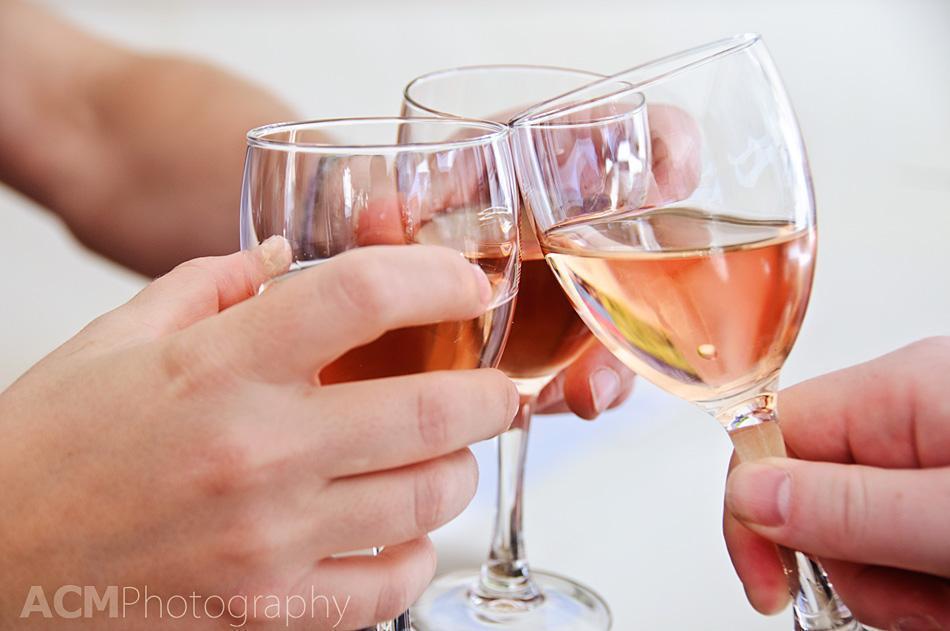 As we entered the dining area, we were confronted by serving areas, colour coded by menu choice. Menu #2 was blue, so we ladies headed off to find our first course. Each menu item was prepared by the staff of one of Belgium’s top restaurants, some of which are Michelin starred. A Michelin starred cafeteria… OK! 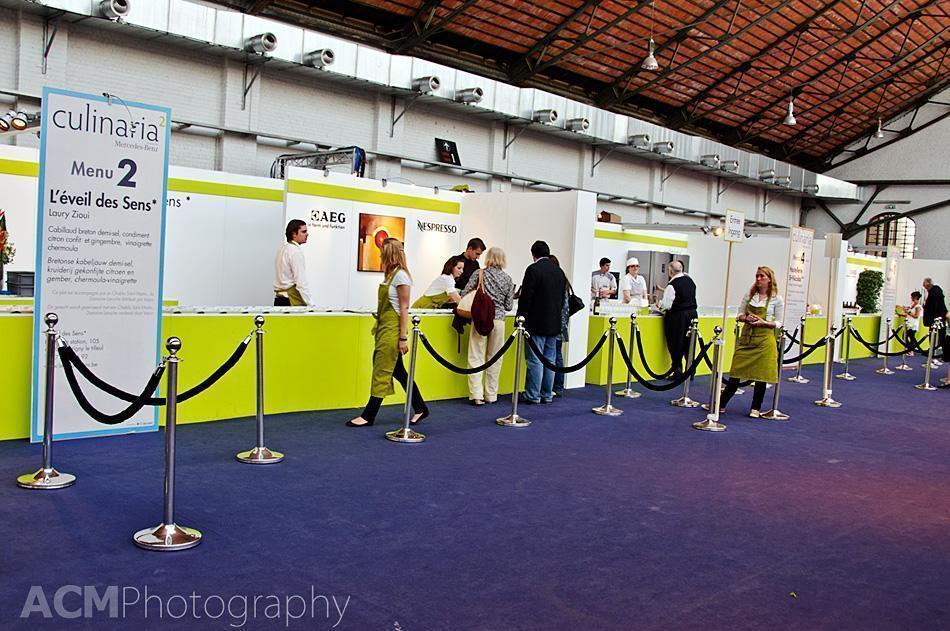 Following the map in our trusty Culinaria guidebook, we quickly discovered there were three whole rooms of food. We found our first course and made our way back to the boys, who had scored us a table.

We girls started with Wild Mushroom Tortellini on smoked duck breast with caramelised wild garlic. It was pared with a Spanish red wine. 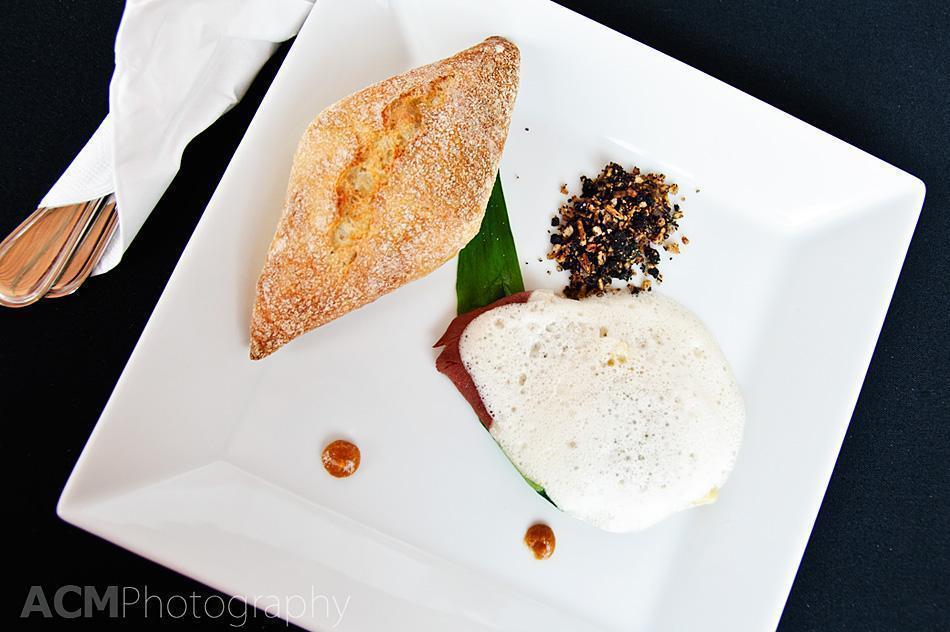 The boys didn’t quite work out the system and picked up their second menu item first. Luckily the courses were designed to mix and match, so they weren’t too bothered.  They began with veal tail, a poached egg and a foam of smoked potatoes, paired with a Sicilian red wine. 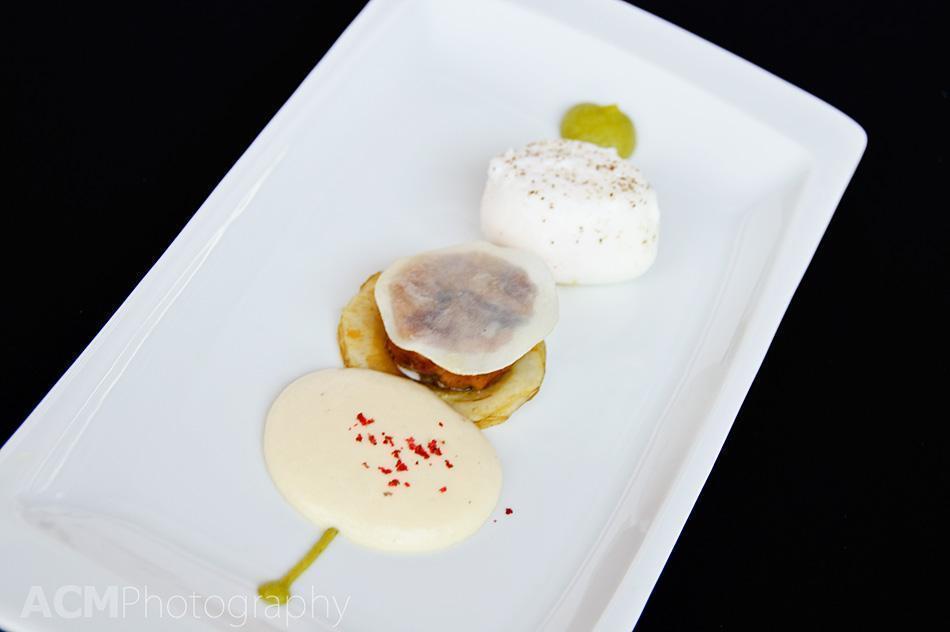 veal tail, a poached egg and a foam of smoked potatoes

The second course for the ladies was Cod in a ginger and lemon sauce. It was paired with a Chablis. Although perfectly cooked, this was probably our least favourite, as it just didn’t have the wow factor of the other dishes. 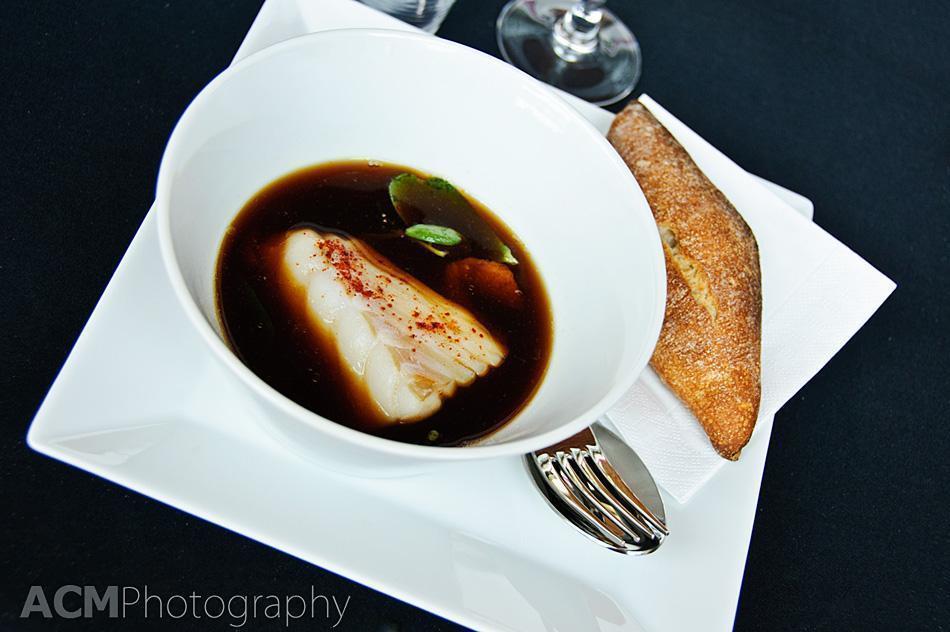 Cod in a ginger and lemon sauce

The boys, on the other hand, had a gorgeous (looking and tasting) dish next. The plate included marinated salmon, foie gras, smoked salmon, green apple, cucumber, beets, sesame and green tea. Although it sounded like way too may flavours on one plate, we were all blown away by the salmon and foie combo. This was paired with Leffe Ruby. 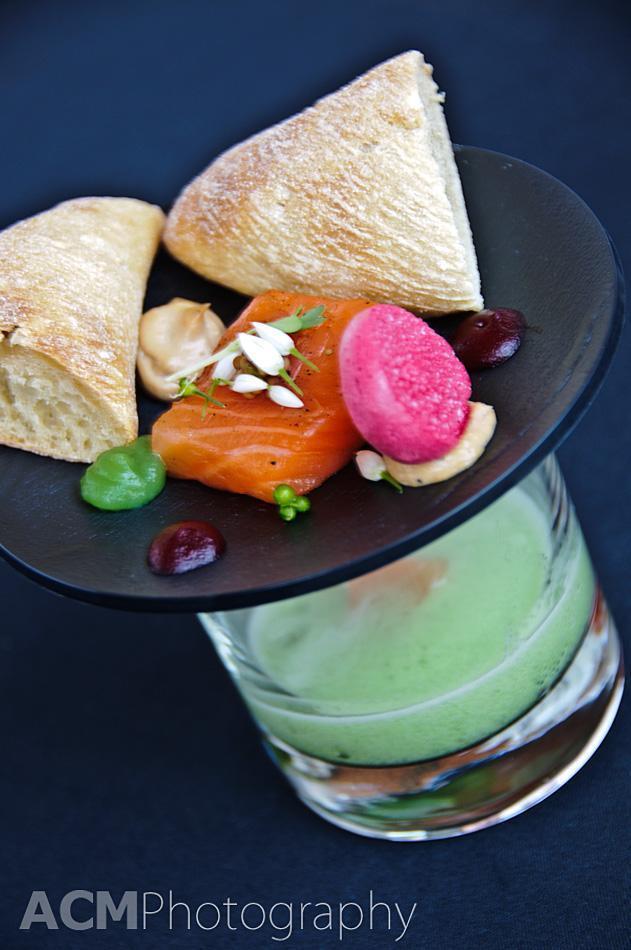 For round three – both menus featured pork, not normally my favourite meat. The girls’ dish however, definitely impressed me. We had breast of pork with head of pig braised in Leffe beer with a salad of peas and pea shoots. This was paired with Leffe Brun. 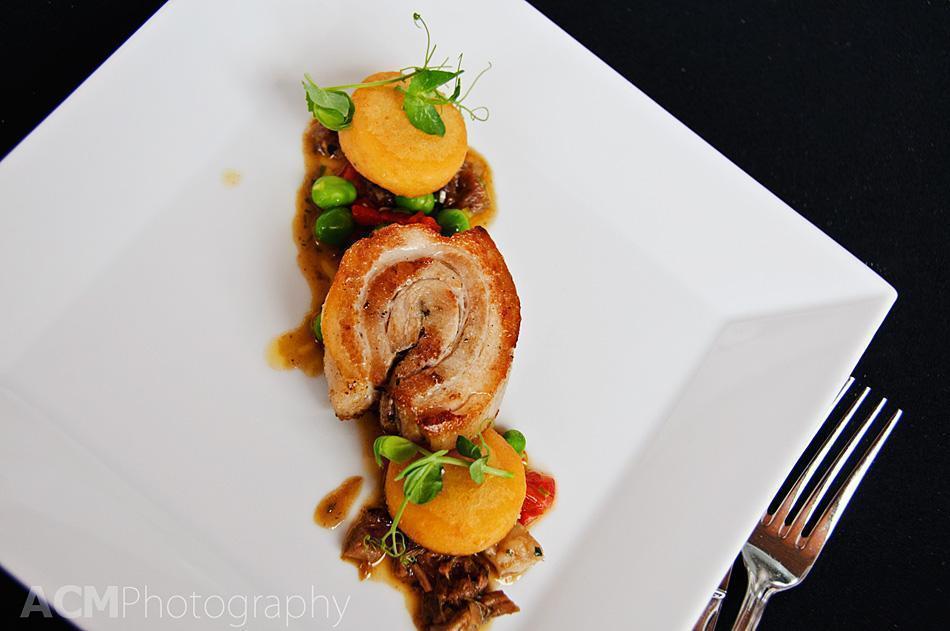 The boys had pork belly with tomato chutney, mushrooms and polenta, paired with a Cote du Rhone. 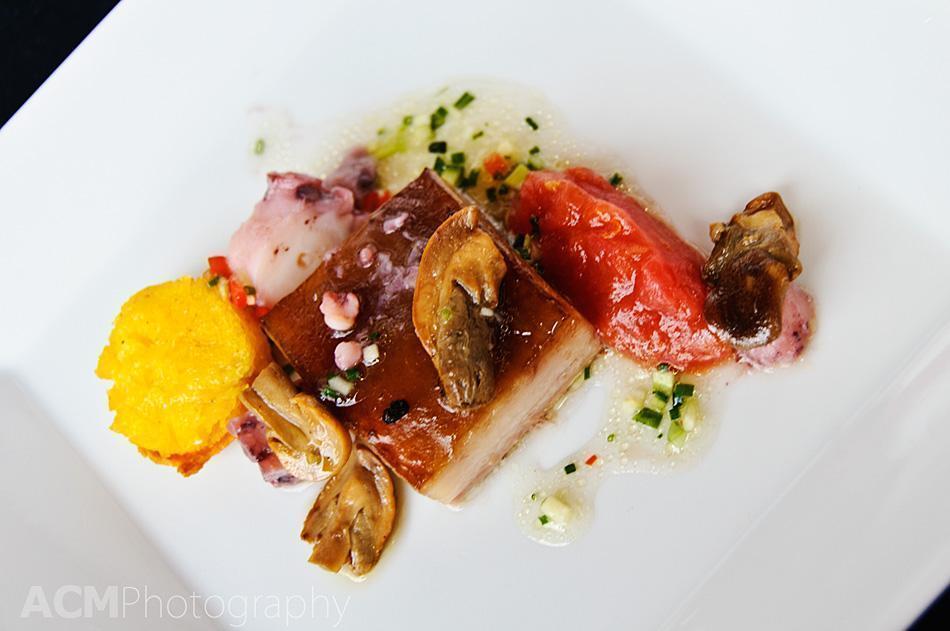 We were impressed to see servers circling the rooms pouring sparkling and still water. The service we received at each station was good and aside from the floor plan being a bit confusing, it was fairly well organised. There was also plenty of seating area for everyone.

But, I have saved the best for last – dessert. It’s not every day you have a dessert prepared by a two star Michelin chef, but that’s exactly what was up next for the ladies. Our dessert, from Comme Chez Soi, was a chocolaty tower of goodness with flavours of cappuccino, ginger and spices. It was paired with a Nespresso and was truly divine. 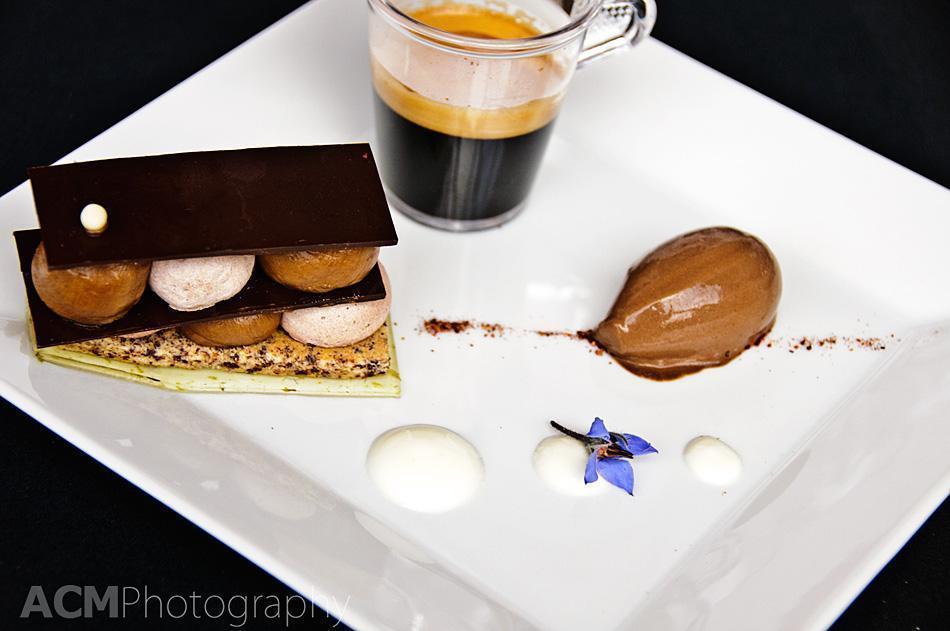 chocolaty goodness with flavours of cappuccino, ginger and spices.

The boys didn’t do so badly either (although not as well as us). Their chocolate concoction (prepared by the two starred Sea Grill) included chocolate crème, coffee and vanilla foam.  Their beverage was a Ruby Port. 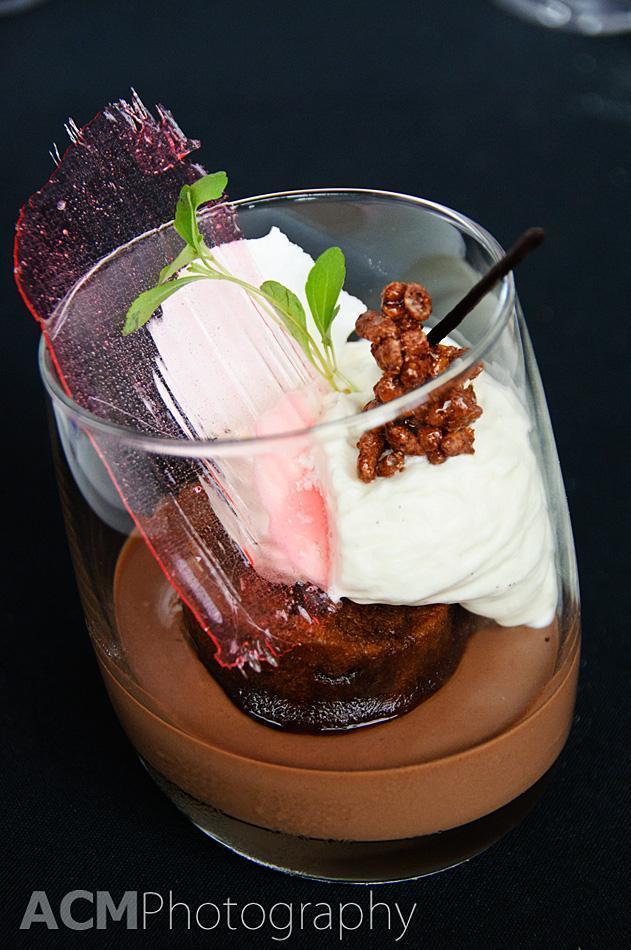 Four courses finished, we then wandered over to the Nespresso bar to pick up our free coffees.

You would think by that point, we had gotten our 39 Euros worth, but there was much more. We wandered over to the Campari bar and were handed cocktails in exchange for our drink tokens. After watching a bar-tending demonstration we started perusing the aisles of local producers who came to promote their wares. 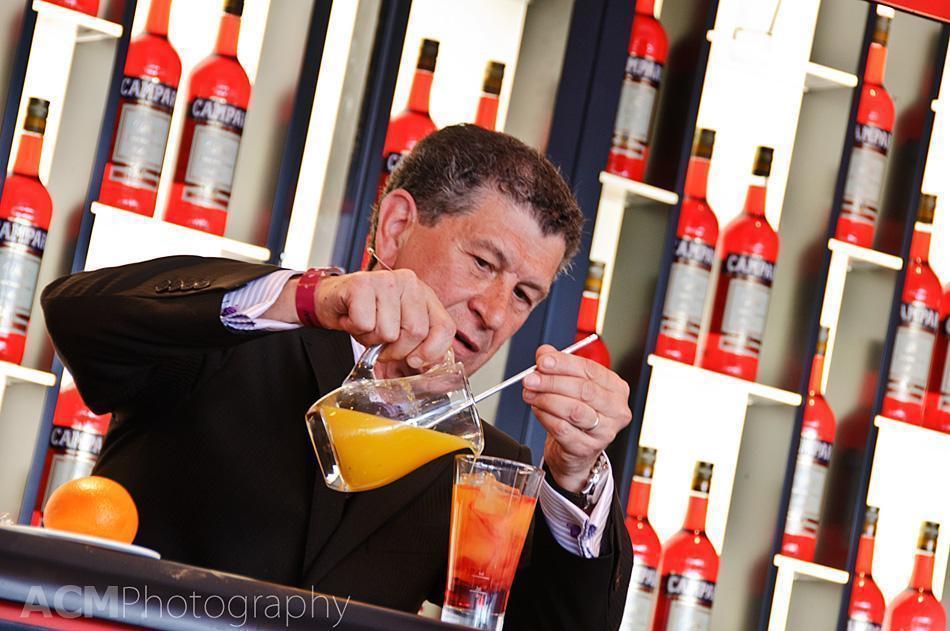 Mixing drinks in the Campari Booth

Our final treat was a spur of the moment purchase by Andrew. We all peered into a case at some black and brown macaroons.  We read the label – truffle and foie gras… macaroons? Andrew couldn’t resist and although we all agreed it sounded so wrong… it tasted so right.

We all waddled out of Tour & Taxis, stuffed like so much foie gras but definitely happy. Six hours of pure Dionysian indulgence on a Sunday afternoon – Only in Belgium.

For more great restaurants in Belgium and beyond, check out our Restaurant Review page.