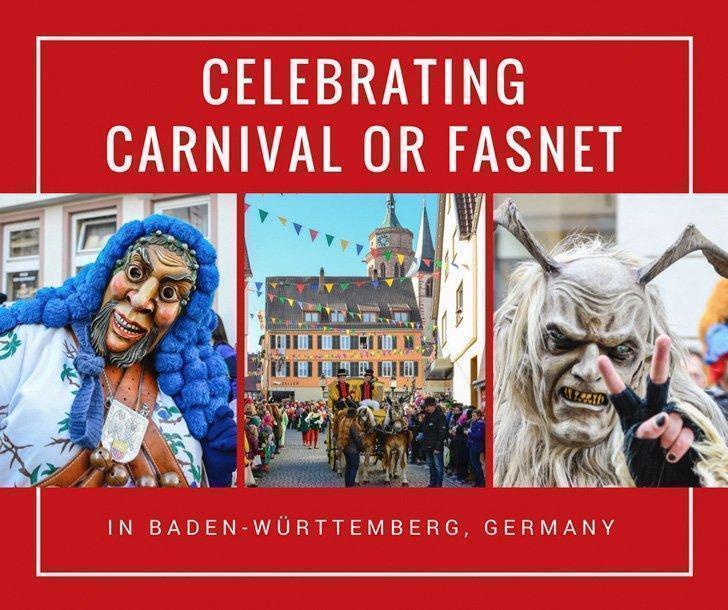 Adi shares the colourful history of Fasnet or Fasching parades near Stuttgart and tips for making the most of Carnival in Germany’s Baden-Württemberg region.

Colorful costumes and elaborate parades are part of the Fasnet festivities, every year, in the Baden-Württemberg region of Germany where Stutgartt is located. But what exactly is Fasnet? Surely, you’ve all heard of Mardi Gras in New Orleans or Carnival in Venice. Fasnet is Germany’s Mardi Gras or Carnival, called Karneval in German.

What is Fasching or Fasnet?

Scary masks frighten away the ghosts of winter at Germany’s Fasnet parades.

It is essential to know the terminology of these celebrations so you can avoid confusion when visiting different parades in various regions of Germany or even in Switzerland and Austria. In Austria and parts of East and South Germany, Carnival is called Fasching. In the German regions of Franconia and Baden-Württemberg as well as some other parts of Germany, Carnival is called Fas(t)nacht, Fassenacht or Fasnet. In Switzerland, it’s called Fasnacht.

Fasnet can be traced back to pagan times. It began as an event to drive out winter and the ghosts of darkness who were weakening as the sun warmed up in springtime. To scare these ghosts away, people formed noisy processions and donned horrifying facemasks to avoid revenge from the wintery spirits. The festival also honored the Goddess Freya and celebrated fertility at the beginning of spring.

Celebrate the arrival of spring in Baden-Württemberg, Germany

The carnival season starts on 11 November at 11:11 a.m. and ends on Ash Wednesday of the next year with the main festivities happening around Rosenmontag (Rose Monday).

Our family only recently starting visiting Fasnet parades. Our kids had to be old enough, to avoid being scared out of their minds by some of the participants. I admit some of these costumes are creepy enough to give me goosebumps, and not the good kind.

Last season we visited two parades. First one was in Tübingen and the other in Weil der Stadt.

Older kids will have a blast at the Fasnet in Tübingen, Germany.

Fasnet was banned in Tübingen for 400 years. In 1565, Duke Christoph “complained about the shrill screams, uproar, and the smell of incense in town, and banned the pagan mischief without further ado.” This prevented Tübingen’s citizens from celebrating Fasnet until 1996.

Today, 70 floats with over 5000 costume wearers frolic in the old town. Last year they charged a 3 euro entrance fee. We arrived early so we can catch some spots in front.

Here’s a look at what we saw:

The Weil der Stadt procession is one of the largest parades in the Baden-Württemberg area and can be traced as far back as the Middle Ages.

The center of town is completely shut down allowing the massive procession of floats and masked teams to flow on the main roads. We arrived early and paid a 3 euro fee to enter. Kids went for free.

Some of the floats were quite amazing and mesmerizing while others were downright scary. I can wholeheartedly say that our family had a wonderful time at this parade.

Here’s a look at the Fasnet in Weil der Stadt, Germany:

Tips to Enjoy a Fasnet or Fasching Parade

Treats for adults at the Fasnet Parade!

Face painting is not always optional at the Fasnet parades.

Bystanders sometimes get carried off by participants in the Fasching Parades

Fasnet costumes can be scary for small children (and adults too!)

No matter which Fastnet parade near Stutgartt you choose, let loose and enjoy.

Adriana
I live in Germany with my husband and two children. I have a big passion for travel and photography. I am most happy when I travel, when I discover new cultures, see new places and try new foods.We have travelled to more than forty countries and almost two hundred cities. See some of the photos taken during our adventures at Life in A Suitcase and follow on Google+.
Latest posts by Adriana (see all)
Pin302
Share8
Tweet
Flip
Email