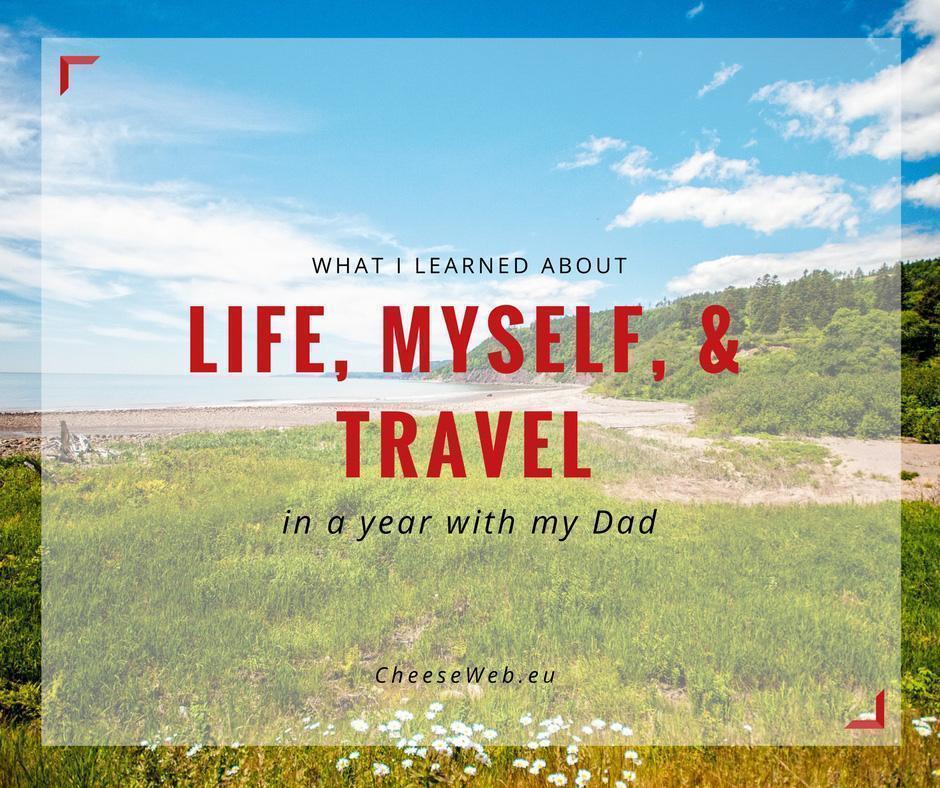 What I learned about Life, Myself, and Travel, in a year with my Dad

Those of you who read CheeseWeb regularly and subscribe to our newsletter know we returned to Canada, just over a year ago, after learning of my father’s terminal cancer diagnosis. On August 16th I said a final goodbye to my Dad, someone who shaped my personality, my career-path, and sparked my love of travel.

It’s difficult to put into words what having this past year with my Dad has meant to me, but the following is my attempt to give a glimpse of who he was and how he influenced who I am today.

On the surface, Dad and I didn’t seem to have a lot in common. He was a mechanic by trade, and his brain was technical, logical, and extremely detail oriented. I am the creative, emotionally driven, spontaneous daughter and always assumed the majority of my personality traits came from my Mom.

This past year, though, I saw much more of Dad in me than I expected. We’re both introverts, and although we enjoy socialising with our friends, we tend to process our most difficult emotions internally. The more serious things get, the quieter we become. Things tended to get pretty quiet after visits with Dad’s doctors.

My Dad, Derek Cornford, will be forever missed

Dad’s cancer was a particularly challenging one to come to terms with as it began its journey 35+ years ago. Mesothelioma (and I do hate the fact I can spell it without looking it up) is caused by asbestos fibres that lodge inside the lining around the lung. The kicker is it takes decades to materialise and for the vast majority of people exposed, it never does. One of Dad’s doctors said it was like winning a reverse lottery. Dad always did pride himself on being different.

The disturbing fact and the reason I’m mentioning Dad’s particular cancer at all is this rare, (almost always) incurable disease is on the rise and likely will continue to be. Folks of Dad’s generation (and mine) were exposed to asbestos everywhere: at work, in schools, in apartment buildings, and even hospitals. The stuff was everywhere long before people knew how to handle it properly. There are now some pre-screening initiatives I would urge you to look into if you know you were exposed. For most people, like Dad, by the time you have any symptoms, it’s already too late.

Until his diagnosis and scarily rapid decline, Dad was a healthy guy (unlike me) almost his entire life. He was prone to some spectacular accidents, though, from car crashes to falling off the roof of his motorhome, all of which he walked away from with barely a scratch. Andrew called him a cat with nine lives and he certainly lived them all to the fullest.

Dad lived life to the fullest and always made us laugh. It was next to impossible to take a photo when he wasn’t making a silly face.

In addition to both being introverts, Dad and I were both only children. As such, we were used to entertaining ourselves and didn’t have issues with silence. But that doesn’t mean we don’t value strong friendships. Like me, Dad built his own family by surrounding himself with trusted friends. It was powerful for me to see how his friends came together to support him when he got sick. Although he wasn’t able to leave the house beyond constant hospital visits, the stream of visitors (some I knew since childhood and others I only met right before his passing) seemed endless. They brightened his days and helped distract him from his pain.

Dad was a collector (you might also say hoarder…), and he LOVED stuff. As a minimalist, this is where our paths diverged, but not as much as you might think. Dad had OCD tendencies, a few of which I admittedly share. To this day, I can’t read a series of books out of order, I secretly adore organising things, and until recently, had a number of ‘collections’ of things related to my various hobbies.

Dad loved his toys. Andrew and I had a great time playing with Dad on his jet ski.

Dad and I both had a tendency to throw ourselves into new interests full-bore, buying all of the gear and gadgets, and quickly getting bored once the equipment had been gathered. Luckily for me (and Andrew) my hobbies all tended to be craft-related and relatively easy to store. Unlike my Dad who loved all things with engines from boats and hydroplanes to tractors and motorbikes.

There were two things he never tired of, though (beyond his friends and family). The first was technology, and Dad was the earliest of early adopters.

I can’t remember exactly what year it was when Dad came home and set up his very first computer, but I do know my age was still in single digits. I remember playing text-based adventure games (on tape) on our first ATARI system and spending hours typing in code from computer magazines to create one simple program. Dad was always upgrading, researching, and learning about the newest, shiniest technologies.

I’m sure Dad wanted me to be a computer programmer rather than a writer (although the fact I married one was almost as good). But I do know he got me off to a great start when it came to being comfortable around computers.

In addition to computers, Dad was heavily into satellite systems; so much so, he and a couple of buddies had their own installation business for a few years. Watching television at our house was always so complicated you needed an engineering degree. There is still a stack of remote controls by Dad’s trusty recliner, and we’re not sure what half of them do.

My Mom and Dad on their second trip to Europe

Dad’s one other constant passion he shared with my Mom and they, in turn, passed it on to me – travel. Oddly, neither of my parents travelled much growing up, but once they met they were often off on adventures. Mom and Dad were travelling together while I was still in the womb and I was only about 4-years-old when they bought their first motorhome. That old Lifetime was what kindled my passion for exploration and what set Andrew and I off on our path of full-time RVing.

Mom and Dad with their second motorhome

Every summer, the three of us would pile in that motorhome, usually accompanied by a gigantic dog and sometimes my Grandmother came along as well. Mom and Dad would have a vague destination, but no real plan of what route they would take or where they would stop along the way. That was all part of the adventure. We travelled to Florida a number of times, Yellowstone, the Grand Canyon, and Nashville. But it was the quirky stops along the way that often still come up in conversation.

When Andrew and I moved to Belgium, my parents came to visit us three times. Although Dad was reluctant to travel overseas at first, he loved it almost instantly. He was constantly asking questions about everything; many of which I couldn’t answer. He wanted to know how everything worked and why people did things the way they did. It was so much fun seeing Europe through his curious eyes.

We have so many silly photos of us exploring Europe with Dad. This is a family favourite from France.

Smiling even during a downpour at Stonehenge

It is that curiosity about the world and how things work I will remember most about my Dad. The following are a few paragraphs from the eulogy I wrote to read at his funeral:

When I was small, I thought Dad had all the answers. It wasn’t until I got older I realised what he actually had, was all the right questions. Dad had an endless curiosity, for how things worked, for how people lived, for politics, geography, history; he was interested in just about everything. He was always reading books and articles, and he never stopped asking questions.

So while I didn’t follow his career path I can attribute the curiosity that drove me to become a writer, straight back to him.

Dad never let not knowing an answer stand in his way. He would ask, read, research, and take joy in learning something new. So as I continue in a world without my Dad, I know he will live on through every discovery I make and every question I ask. Because of him, I will never stop exploring, asking questions, and being curious about the world.

How I’ll remember Dad best – with my Mom on their travels, with his hat and a smile

If you would like to learn more about Mesothelioma or donate to help fund research and support for patients and families, please visit the Canadian Mesothelioma Foundation website.

Alison Cornford-Matheson
Alison Cornford-Matheson is a Canadian travel writer, author, and photographer. She is the founder of Cheeseweb.eu, a website dedicated to slow and sustainable travel, off-the-beaten-path destinations, and cultural awareness through travel. She and her husband, Andrew, are the founders of RockFort Media, committed to helping entrepreneurs tell their stories online. Alison has visited over 45 countries and, after living in Belgium for 11 years, now lives full-time in a Bigfoot motorhome named Yeti with Andrew and their well-travelled cat.
Latest posts by Alison Cornford-Matheson (see all)
Pin135
Share87
Tweet2
Flip
Email