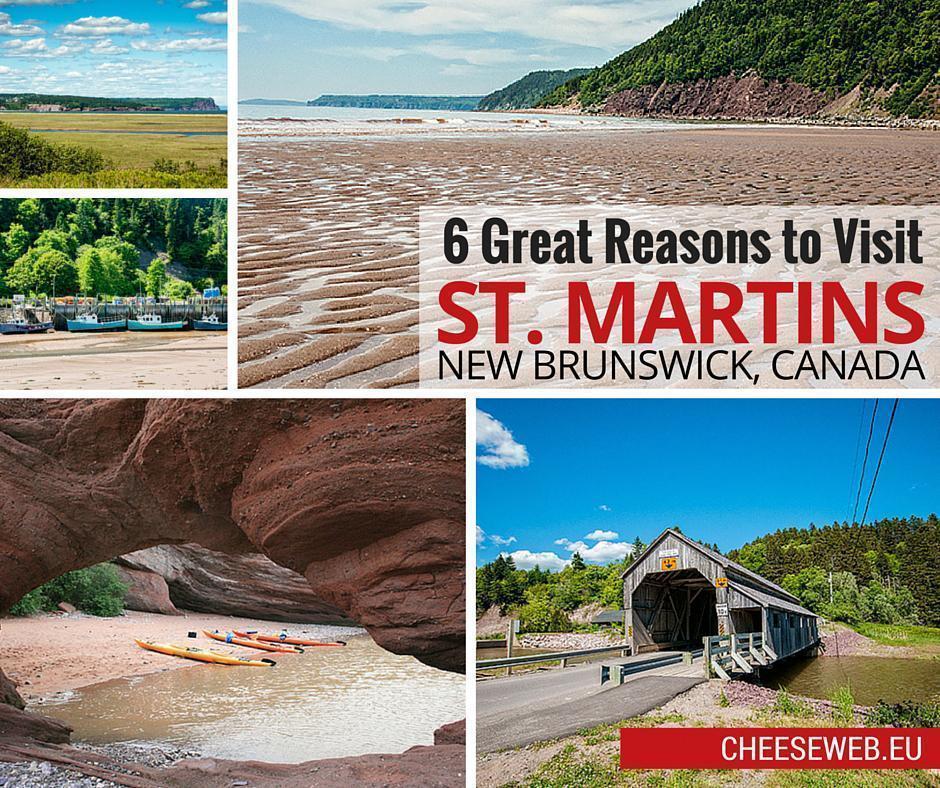 The tiny village of St. Martins, New Brunswick makes an ideal base for exploring the Fundy coast of Atlantic Canada and offers plenty of things to do for travellers.

As much as we enjoy spending time in vibrant cities, we also love discovering the charms of small towns and villages. Last summer, as we wandered through the villages of France, we realised a place doesn’t have to be large to have something to offer travellers. With this in mind, we decided to explore some of the smaller towns in New Brunswick, this year. In fact, our first getaway in our motorhome, was to the village of St. Martins, 40km from Saint John, the province’s largest city. 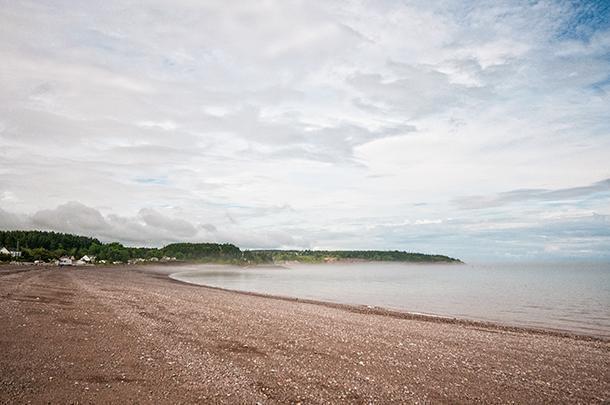 St. Martins is an ideal place for a relaxing escape from the city. But don’t let its size fool you; there’s plenty here to keep even the most active visitors occupied. Here are just six great reasons to visit the village of St. Martins, New Brunswick:

1. Take a Walk through Shipbuilding History 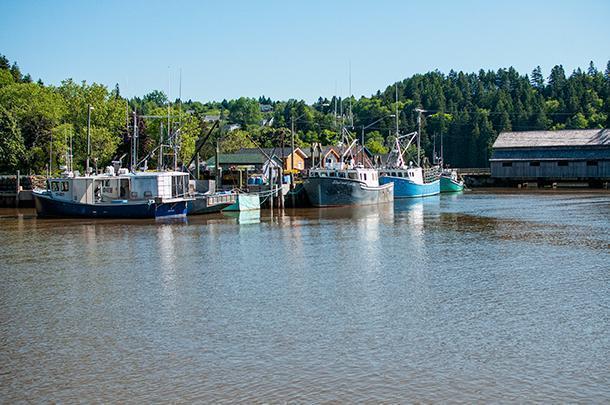 It’s hard to believe this lovely, little village of fewer than 400 inhabitants was once one of the richest shipbuilding cities in the British Empire. More than 500 sailing ships were constructed here in the 1800s. Visitors can still see evidence of this wealth by walking down Main Street and admiring the remaining sea captains’ houses. A few of them are even run as inns, allowing guests a taste of historic splendour.

To learn more about St. Martins’ sea-fairing past, visit the small, volunteer run Quaco Museum and discover the history of this community on the Bay of Fundy. 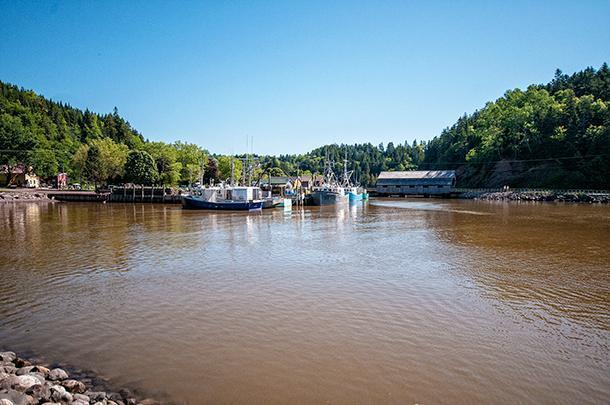 At high tide, the fishing boats float beside the wharf.

Wherever you travel along Atlantic Canada’s Bay of Fundy coast, you’ll hear the phrases ‘world’s highest tides,’ and ‘walk on the ocean floor.’ While there are many places in New Brunswick where you can witness this natural phenomenon, St. Martins is one of the best.

For starters, you can see the dramatic rise in tides at the tiny harbour. At high tide, the boats are bobbing almost level with the top of the pier. At low tide, they sit in the red mud of the ocean floor. It makes for a striking illustration of what ‘high tide’ actually means here. 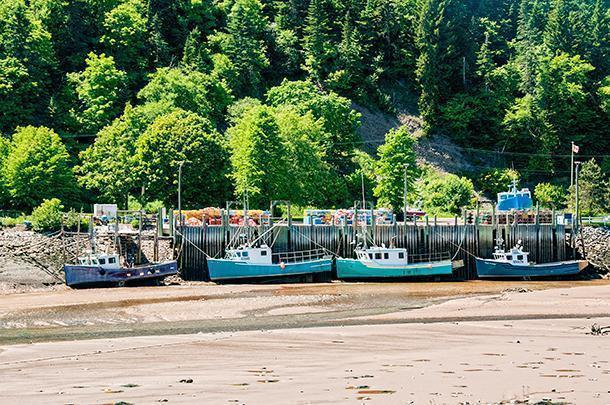 At low tide the boats sit on the ocean floor

At low tide, you can also enjoy miles of beaches, both sandy and rocky, stretching the length of the village. You can also explore the famous sea caves, carved into the red stone cliffs by the pounding tides. These caves virtually disappear underwater at high tide. 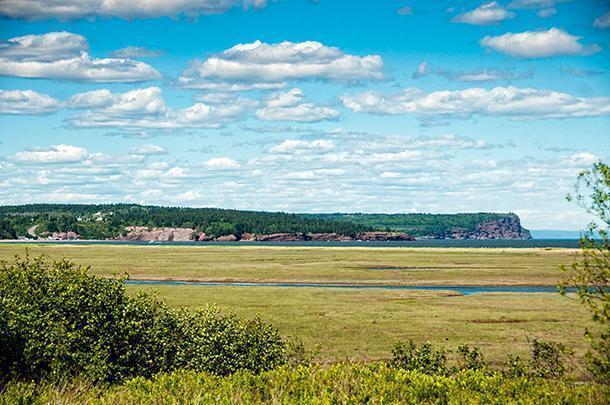 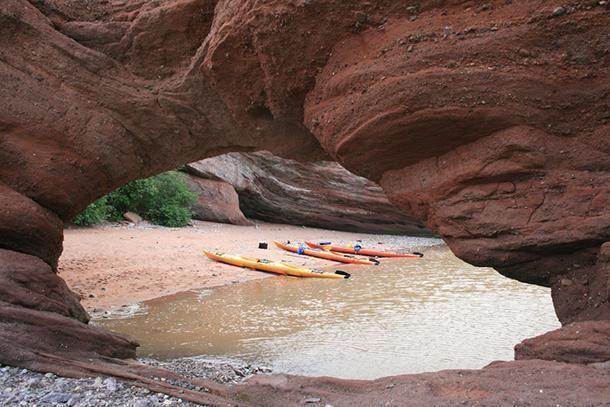 You don’t have to stay on land to discover the Fundy tides. There are several operators in St. Martins who rent kayaks and lead tours along the coast so you can get up close and personal with the cliffs even at high tide. 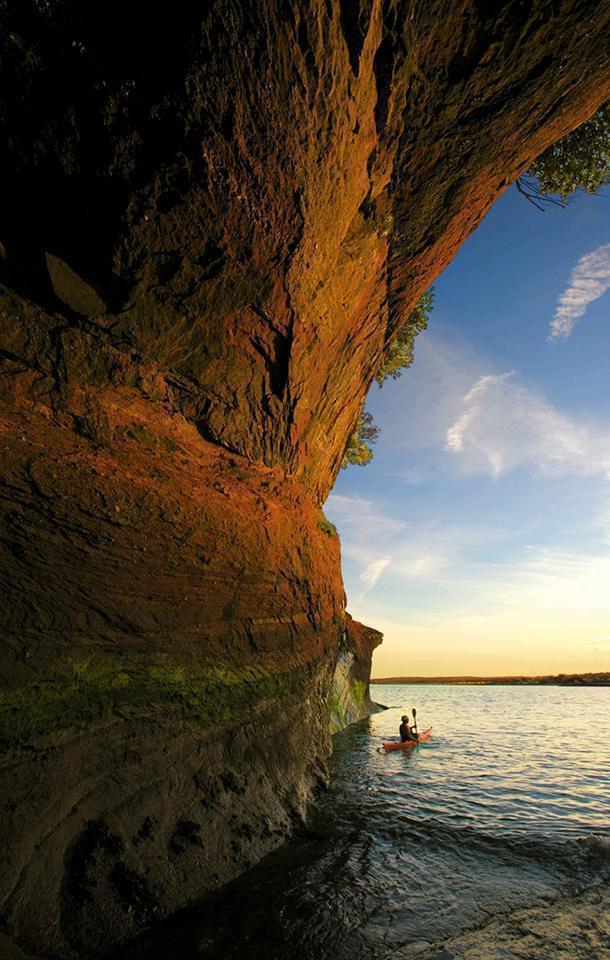 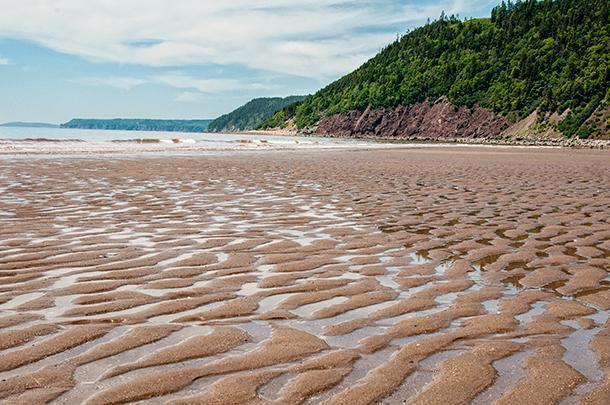 Speaking of the Fundy coast, St. Martins serves as the gateway to the incredible Fundy Trail Parkway. The trail is part of Stonehammer Geo Park; the UNESCO designated Fundy Biosphere Reserve; and the Trans Canada Trail. There’s so much to see and do in the Parkway; we wrote an entire article about the Fundy Trail. 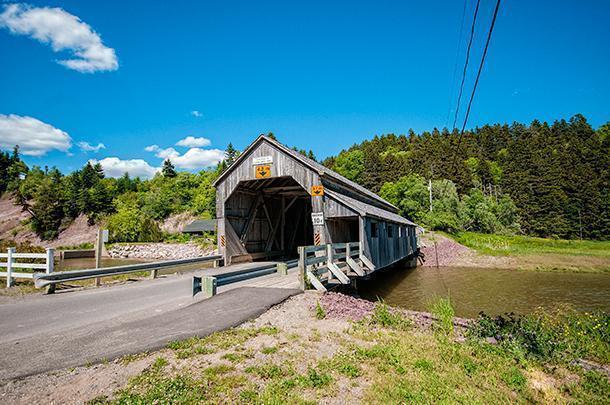 In addition to dramatic coasts and high tides, another of New Brunswick’s icons is the covered bridge. The province has more than 60 of these picturesque wooden structures (including the longest one in the world), and tiny St. Martins is home to two of them. In fact, popular lore has it; it’s the only place in the world you can have two covered bridges AND a lighthouse in the same photo.

While we only managed to get one bridge and the lighthouse in our photos, we did think driving across the bridges in our motorhome was pretty thrilling. 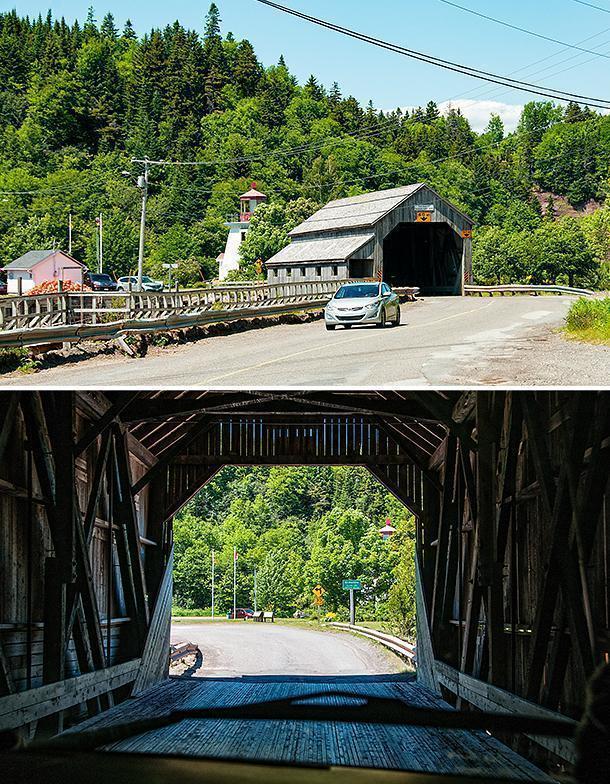 Driving through one of St. Martins’ covered bridges in our motorhome, Yeti!

Fun Fact: Covered bridges were also called ‘kissing bridges’ because men would slow their horses when riding in a wagon with a lady so that they could steal a kiss away from prying eyes inside the bridge.

5. Sleep Over in Unique Accommodations

While St. Martins is an easy day-trip from Saint John, it’s well worth spending at least one night in the village. Not only does it afford more time to take in all the activities, but you’ll also be able to experience the full cycle of the Fundy tides. You won’t find any chain hotels in St. Martins; In fact, you won’t find any hotels at all. What you will find is a variety of family-run inns, B&Bs, cottages, and campgrounds. 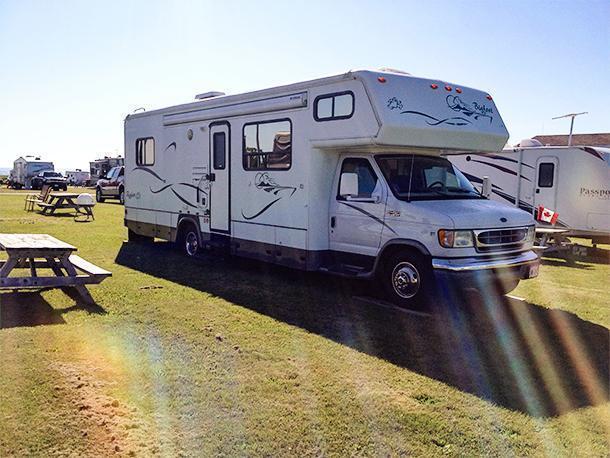 Because we visited St. Martins in our motorhome, we stayed at the Century Farm Family Campground. One of two campgrounds in the centre of the village, with views over the beach, Century Farm is a popular spot. It is extremely well-maintained with friendly staff and a full range of facilities. The only downside is because it is right on the beach, there is little privacy, and when the campground is full, you are cheek to cheek with your neighbours.

While we haven’t personally tested any of the B&Bs or inns in the village, the Salmon River B&B, St. Martins Country Inn, Tidal Watch Inn, and Weslan Inn B&B, all rate very well on Trip Advisor. A B&B stay in St. Martins is definitely on our travel bucket list.

6. Choose Sides in the Chowder Wars

It just wouldn’t be a prime travel destination for us if there weren’t a foodie element and, this close to the Fundy coast, that element has got to be seafood. While you can cover all the seafood bases in St. Martins from lobster to clams, the star of the show here is seafood chowder.

While you’ll find chowder on just about every restaurant menu in the village, there are three main restaurants competing for the ‘Best Chowder’ title. Right on the beach, at the sea caves, are two restaurants (even though it looks like one building): The Caves, which claims to have ‘world famous’ chowder and the Sea Side Restaurant, which claims ‘award-winning chowder.’ (We’re not sure who voted our handed out the awards.) Right on Main St. you’ll find the third contender, Coastal Tides Restaurant. We ended up at Coastal Tides, mainly because the two on the beach were crowded (and it’s right next to Century Farm.) Nevertheless, the chowder was excellent. I also enjoyed the lobster roll, which was simple and brimming with lobster, just the way I like it, while Andrew feasted on fried clams. 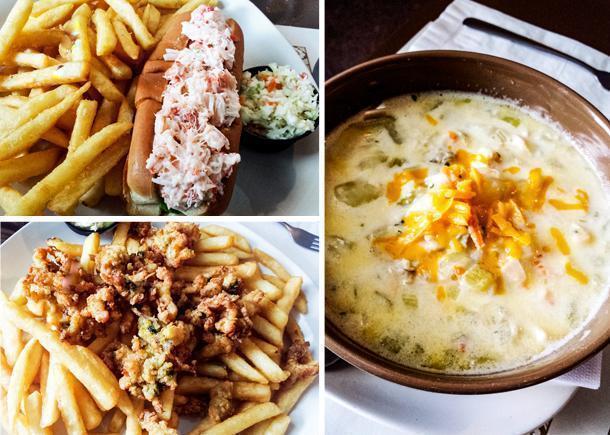 [Note: I’ve just read the current owners have retired and sold the restaurant. They will only run it to the end of this year.]

Word from the locals is: Coastal Tides has the thinnest of the three chowders, while Sea Side has the thickest. Of the three, The Caves is the most ‘fine-dining,’ while Sea Side is take away, and Coastal Tides is more family-style. In my mind, if you love seafood chowder, you really can’t make a wrong choice here. Our suggestion – try all three and choose your favourite.

While St. Martins makes a great day-trip from the bigger cities in southern New Brunswick, it’s well worth slowing down and taking a few days to discover this gem of a village. It’s the perfect base to explore the Fundy Trail, experience the dramatic Fundy tides, and feast on excellent seafood, all while enjoying small-town Atlantic Canadian hospitality. Save us some chowder St. Martins, because we’ll be back. 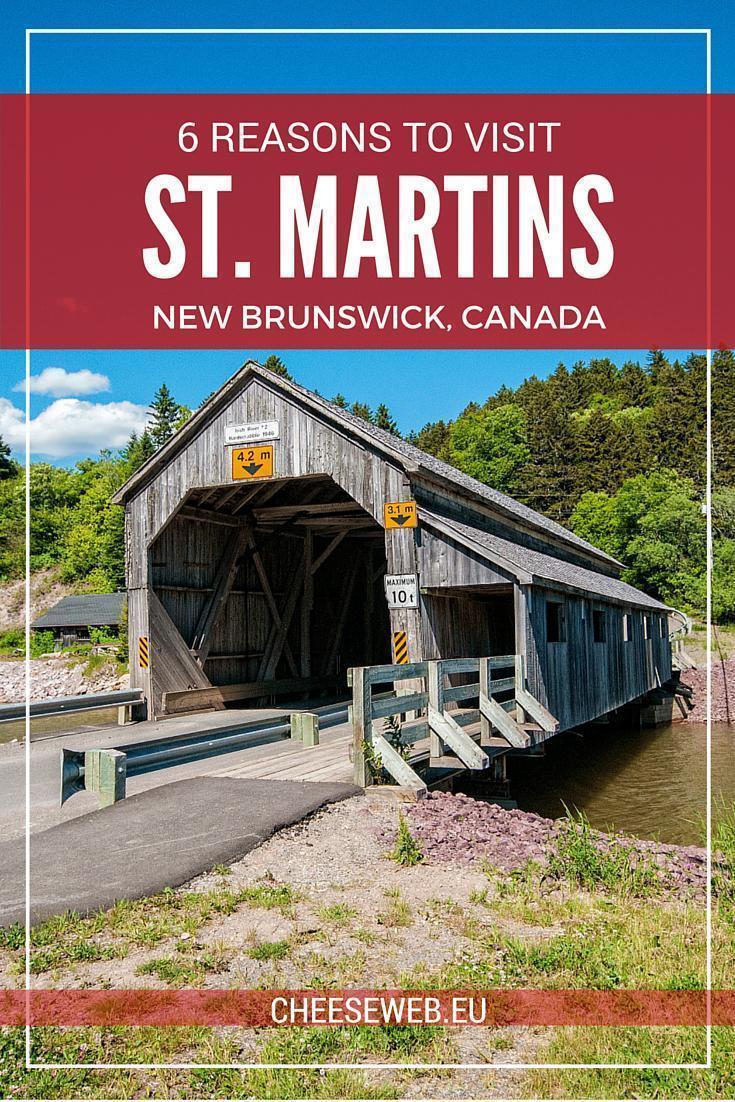