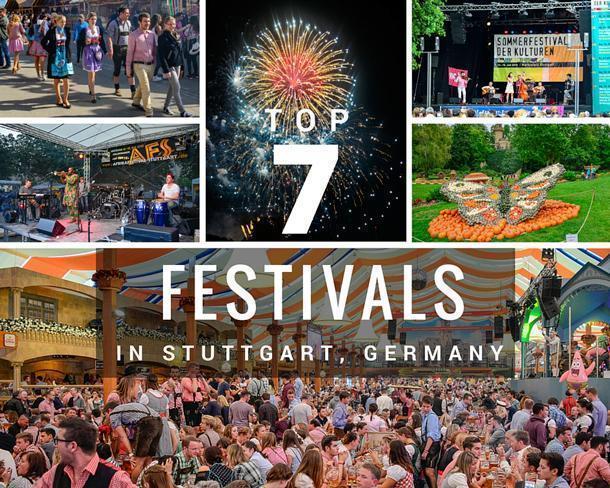 Our Germany correspondent, Adi, shares her top 7 festivals in the Stuttgart area, for your fix of German tradition, food, and fun, all year round.

Germany is well known for being party central, in Europe, with hundreds of festivals, big and small, to choose from. I prefer the big festivals, for their abundant variety of food and fun. The following are my favourite festivals in the Stuttgart area of Baden-Württemberg in Southern Germany.

The Frühlingsfest Spring Festival offers rides for all ages

Frühlingsfest, or the Spring Festival, is an annual fair in the city of Stuttgart, between the middle of April and the beginning of May. The festival takes place on the traditional fairgrounds of Cannstatter Wasen (Bad Cannstatt). It is slightly smaller than the Volksfest, in autumn, but it is the largest spring festival in Europe.

The Afrika Festival debuted in 2003, on the 2nd weekend in July. Since then, it has attracted thousands of visitors, local and from abroad, to the Heslach District of Stuttgart. The festival is a meeting place for people of all nations; an ideal place to make new contacts or renew old friendships and enjoy colourful merchandise (seriously you will want to buy it all). It has been one of my absolute favourite events this year.

Ethiopian and Malagasy food at the Afrika Festival in Stuttgart

Plenty of live music at the Cultures Festival

The Summer Festival of Cultures takes place every July, in Marktplatz, Stuttgart. The big street festival is a place where you can encounter enthusiastic people of all nationalities, races and ages.

The festival is a crowd-puller for the most diverse people and cultural groups. Stars of the international World Music scene offer an exciting mix of concerts. Go for the culinary delights from around the world and the other cultural programs provided by the Stuttgart immigrant associations.

A feast for the eyes at the Flammende Sterne Fireworks Festival

The Flammende Sterne Festival, or the Flaming Star festival, is an international fireworks competition, held yearly in August, in Ostfildern, some 20 minutes from Stuttgart. This year was the 13th edition, and the participating countries were Italy, the Philippines, and Brazil. For a weekend, each country has 20 minutes in the evening, to mesmerize the jury with their firework display, to the rhythm of the music.  Like any other festival, there is food and rides for the little ones.

Weindorf, or the Wine Village, has been happening every year, in late August – early September, for the last 40 years. It takes place in the center of Stuttgart; Marktplatz, Schillerplatz, and Kirchstraße. The Stuttgart Weindorf has become a well-known ambassador in promoting the Swabian way of life. The unique atmosphere is probably one of the main reasons why this event has also been successfully held in St. Gallen, Switzerland, and Brussels, Belgium. It has also travelled to Berlin twice.

The annual Ludwigsburg Pumpkin Festival takes place in Ludwigsburg, 15 minutes north of Stuttgart, from the beginning of September to the beginning of November, at the Baroque Palace.  Over 400.000 pumpkins are used, every year, to build different themes. This year’s theme was Fliegen or Taking Flight.

Throughout the event, you can view a giant pumpkin carving, a European pumpkin weigh-off, Germany’s biggest pumpkin soup, pumpkin canoeing in the palace fountain, a Halloween pumpkin carving event, and much more.

The Cannstatter Volksfest has been happening for almost 200 years and is wildly popular. Annually, it attracts about four million visitors, from near and far, to Stuttgart, the state capital of Baden-Württemberg. People are captivated by the special atmosphere of the wonderful funfair, coupled with beautiful festival tents, a colourful flea market, and many other attractions. Rich in tradition, the Cannstatter Volksfest is not only the biggest festival in Baden-Württemberg, but it also has one of the biggest funfairs in the whole of Europe.

And the illuminated Cannstatter Volksfest, by night

The festival is celebrated on the Cannstatter Wasen (Bad Cannstatt), a 37-hectare site on the banks of the River Neckar, from the end of September to the beginning of October.

Whether you live in the Stuttgart area or are just visiting, try to make it to at least one of these fantastic festivals. It will make your soul and tummy happy.

Adriana
I live in Germany with my husband and two children. I have a big passion for travel and photography. I am most happy when I travel, when I discover new cultures, see new places and try new foods.We have travelled to more than forty countries and almost two hundred cities. See some of the photos taken during our adventures at Life in A Suitcase and follow on Google+.
Latest posts by Adriana (see all)
Pin985
Share564
Tweet17
Flip
Email