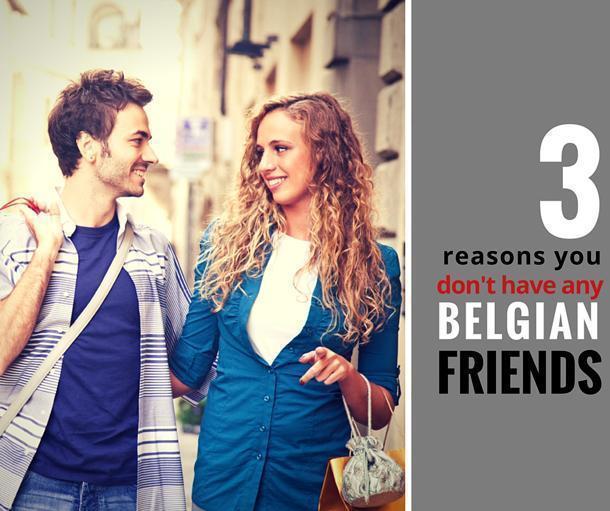 3 Reasons You Don’t Have Many Belgian Friends

Our guest contributor tackles a common expat issue – making friends with Belgians. If you’ve ever felt you don’t click with the locals, Paola offers 3 reasons why you may not have many Belgian friends.

A couple of months ago, a co-worker decided to return to his home country after living in Belgium for several years. He originally moved to this land due to a very attractive job offer, but after awhile, he would complain about all the small cultural differences between his country and this one. Eventually, homesickness got the better of him.

Amongst the many questions, I asked about his life here that would trigger his decision to return home, there was one about his social life, more specifically about all his Belgian friends…

“What are these Belgian friends you speak of? Other than the people from work, I don’t hang out with any Belgians! And not by choice I should say!”

What followed was a small rant on how tight-knitted Belgians are and how inhospitable they are towards foreigners. Ok, that was probably a wide exaggeration, but it made me think about a very common pattern amongst the internationals, who I know, living in Belgium: when it comes to their social circles, Belgians are the minority group. Now, why is that? I went out and asked a bunch of people, Belgians included. Here’s what I found out:

1. Belgians have issues with commitment…

…meaning, they just have too many of them! If there is a top grievance that makes establishing long-lasting friendships with Belgians a huge challenge for us internationals, it is that we rarely get to see them.

I don’t think I’ve ever met a more schedule-loving group of people in my life! I personally struggled with this when I first came to live in this country, especially since I come from a land where I could just phone a friend and make impromptu plans for dinner that same day!

Even with most service providers, things happen with appointment (think of getting a haircut or a manicure) and there is rarely any sense of urgency (like when getting any medical diagnostic testing – X-Rays, MRIs, blood work, etc.).

The key to overcoming this situation is to be patient. By all means, take initiative and attempt hangouts with Belgians. Those who care will let you know, even if they can’t make it. However, if after a while a so-called “friend” doesn’t seem to respond to any of your invites, move on. They are probably really stuck on reason number 2.

Who doesn’t love their comfort zone? However, Belgians sometimes take it to an extreme that many internationals find remarkable.

Have you ever heard how Belgians like to “stay close to their village”? This doesn’t just apply to driving 2 hours every day in traffic, rather than move closer to their workplace. It also means being close to their families and the friends they’ve known forever and ever.

Belgians pose an interesting contrast between a very progressive society, (for example, Belgium was second country in the world to legalize gay marriage) versus a populace that craves stability.

Are you planning things far enough in advance to include your schedule-loving Belgian friends?

Maybe Belgium’s history has something to do with this. After all, this territory, we know as Belgium, has been invaded / occupied by so many throughout history, it’s no wonder its people crave the comforts of sameness.

Showing genuine interest in the life of your prospective Belgian friend (in an appropriate, non-stalker way, of course) can get her to open up and put you in a place within her inner circle! Now, you may not realize this because of reason number 3.

3. Belgians are so hard to read

The first few years I lived in Belgium I was very, very confused by my social interactions with Belgians. They generally seem soft-spoken, with the occasional rant here and there (usually complaining about something). Overall, no matter if dealing with someone from Brussels, Wallonia, or Flanders, Belgians appeared to me rather disaffected and generally cold and distant. Soft-spoken, cold and distant, disaffected, and yet with enough passion for the occasional rant. Sounds contradictory? That’s what I mean by hard to read.

Working with Belgians can be puzzling. Whether or not they are buying into what you are proposing is a mystery. If they are, they don’t show much enthusiasm about it, for sure!

When you really think about it, and analyze the situation, Belgians are actually more self-effacing than anything else. How many times have you ever heard Belgians sing boisterous praises about anything or anyone, including themselves?

Some (mainly Belgians) say this is modesty. Others (also Belgians) say Belgians underestimate themselves. Whichever it is, don’t give up the challenge of deciphering, if dealing with a friend or foe.

As with most relationships, building friendships with Belgians requires time and effort (maybe a tiny bit more than say, South Americans), genuine interest, and empathy.

Many internationals don’t even try, because they’re only here for a short period. But making new friends can be a challenge even for adult Belgians. Some of those I spoke to say, the social circles they’ve had since an early age haven’t changed much as adults.

I still think pursuing Belgian friendships is worth a try. Some of those general traits about Belgians have a great positive spin in the friendship department: they are true, loyal, and just about one of the nicest people you’ve ever met; even if their schedules only allow a get together once or twice a year!

Looking for a place to stay in Belgium? Book hotels at the lowest possible rates below:

Paola
Paola Campo is a communicator and knowledge enthusiast with a passion for blogging, learning, and reviewing "stuff". She gets to do most of that in her entertainment and lifestyle blog The Paola Campo Report, which you should totally be reading right now. You can also follow her on Facebook, Twitter, and Google+
Latest posts by Paola (see all)
Pin1
Share275
Tweet263
Flip
Email