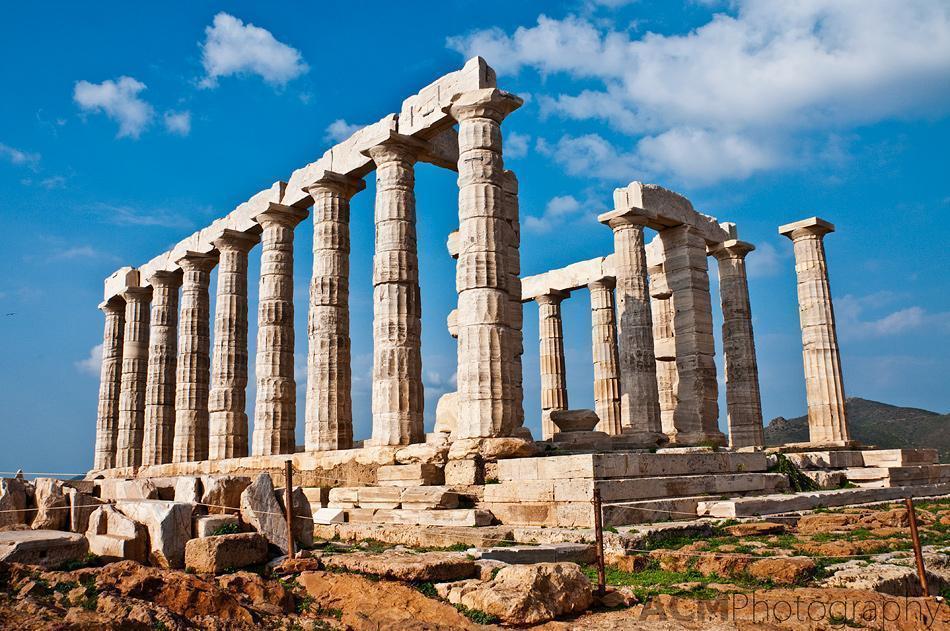 A Road-trip to the Temple of Poseidon at Sounion, Greece

This entry is part 3 of 7 in the series Glorious Greece.
THIS POST MAY CONTAIN COMPENSATED LINKS. FIND MORE INFO IN MY DISCLAIMER. 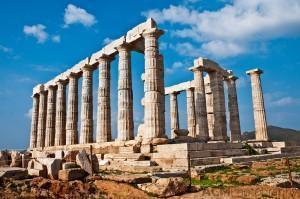 Andrew and I love road trips. Driving ourselves allows us to stop when we like, go where we want and explore places we wouldn’t see otherwise. This is how we were able to visit the Poseidon Temple in Sounion, Greece.

One of my favourite days on our recent trip to Vouliagmeni and Athens, Greece started with a spur of the moment decision to rent a car and go exploring. After searching the phonebook for a local rental agency, we decided to ask the hotel staff for advice.

The front desk clerk said he would make a few calls. Low and behold, a few calls later and we had a car coming from Athens that was half the cost of the cars locally AND it would be dropped off at our door.  I am a huge advocate of seeking local knowledge when you travel. Sure we could have picked a rental car on-line but because we took the time to ask, we got a better deal and some great advice on where we should drive.

The weather was drizzly, one of the reasons we decided a road-trip would be a nice way to spend the day. But not long after we left town, out came the sun to dry up all the rain.

The hotel clerk had recommended we drive to Sounion (Soúnio in Greek) and we were glad we took his advice. The road wound south hugging the coast. On the left we could watch the Greek countryside roll by and on the right we could admire the blue Aegean sea. 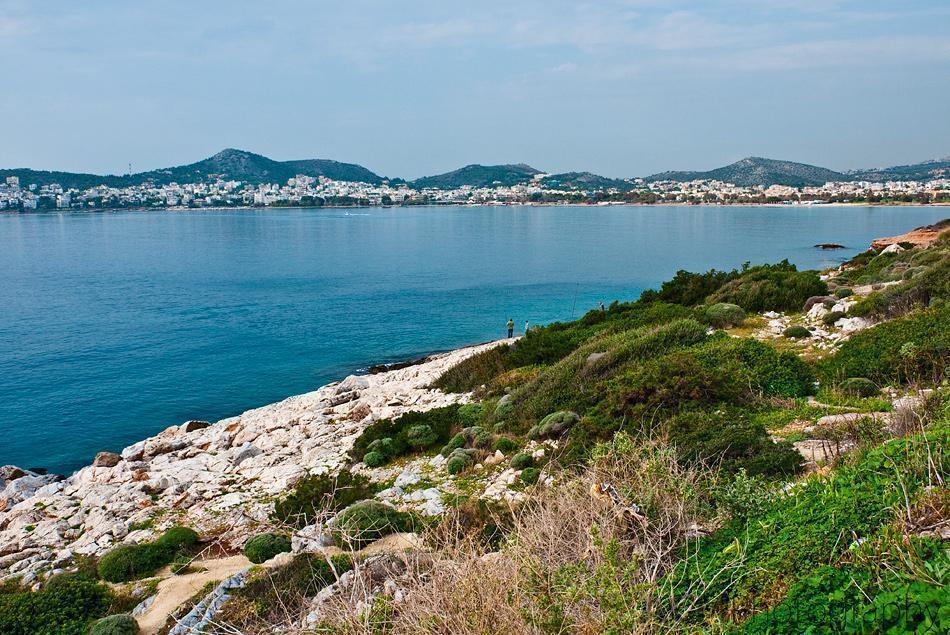 View of Vouliagmeni from the coast road

Cape Sounion is the site of the stunning ruins of the Temple of Poseidon, the Greek god of the sea. You can see the striking white pillars from across a small bay as you drive towards the town.  The temple, perched high on a cliff-top point, acted as a beacon for sailors on their way home. 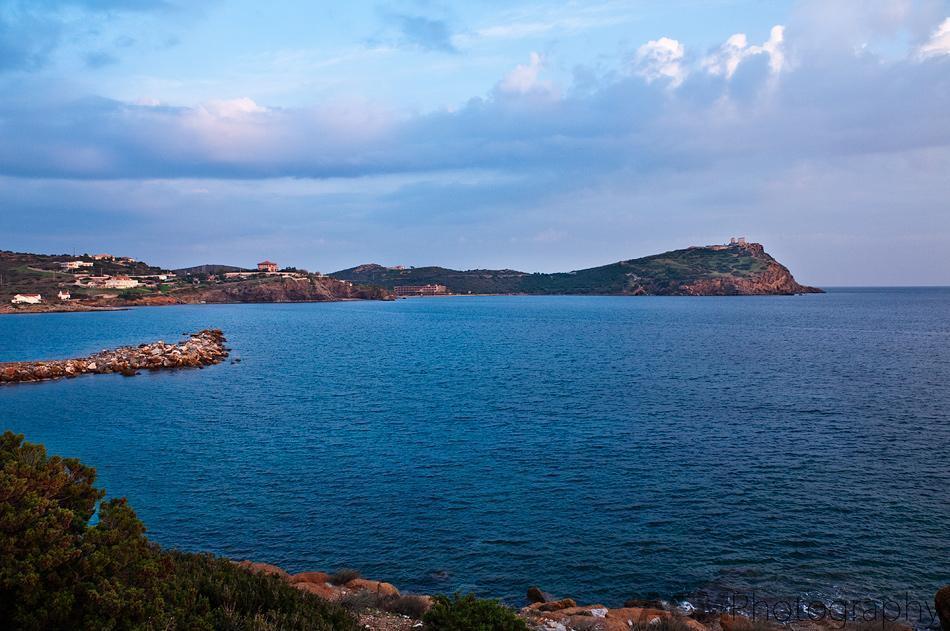 The Poseidon temple consisted of 34 Doric columns made of marble. Only 15 remain today. Famously, in 1810, the poet Lord Byron carved his name into the temple, beginning a history of vandalism at the temple. 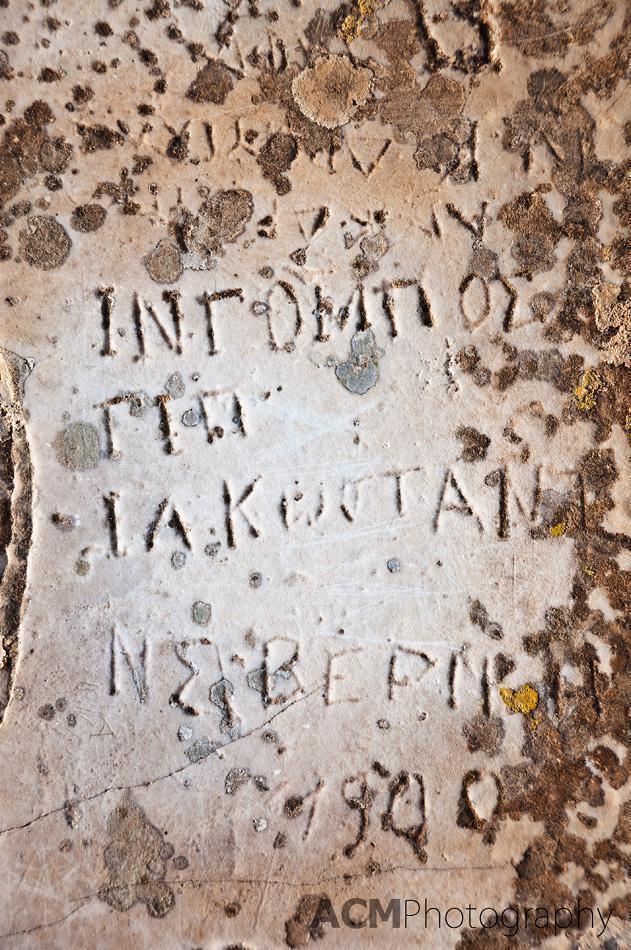 Graffiti from 1900 at Sounion

When we arrived at the  site, there was only a handful of other people, and we could wander around the ruins in peace. Although the temple itself is roped off, you can stroll around the entire grounds of the former surrounding village.

We followed a small path down towards the water and discovered what once had been the main road to and from the temple. Years of foot traffic had carved a deep groove in the earth and we could see the remains of building foundations on either side.

Even in early November there were still wildflowers blooming. I was delighted to find some bright purple crocus to photograph. Greece is famous for saffron and with the abundance of crocus I spotted, it’s easy to see why. 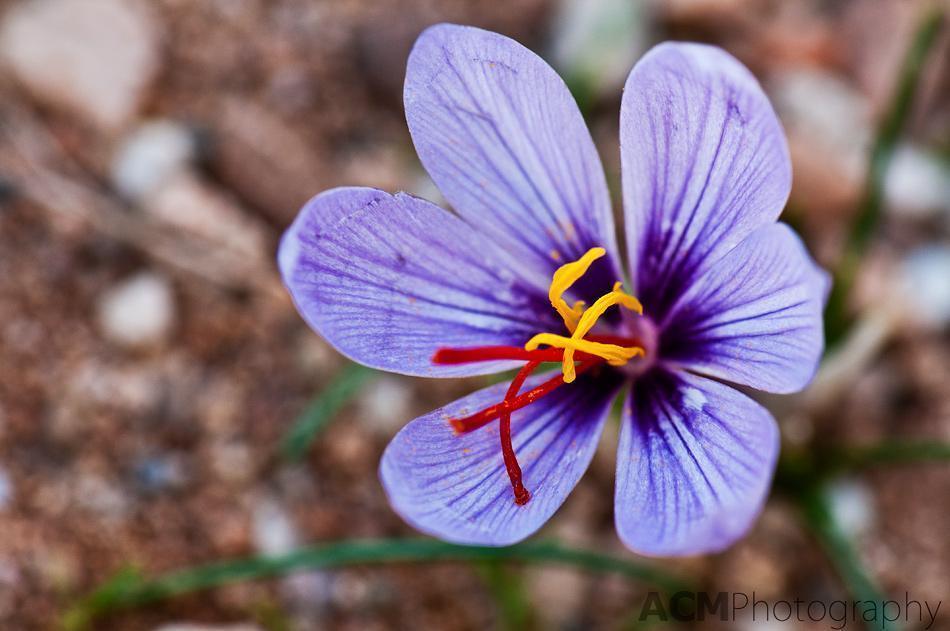 We also discovered some interesting wildlife as we explored. We almost tripped over a turtle who was munching grass beside the path. Then we spotted a strange bird, I later learned was a Chukar Partridge (Alectoris chukar), crashing through the brush. He wasn’t alone. We spied another and another until we found a whole flock huddled under a shrub. They didn’t seem terribly concerned by our presence and let us walk right past them. 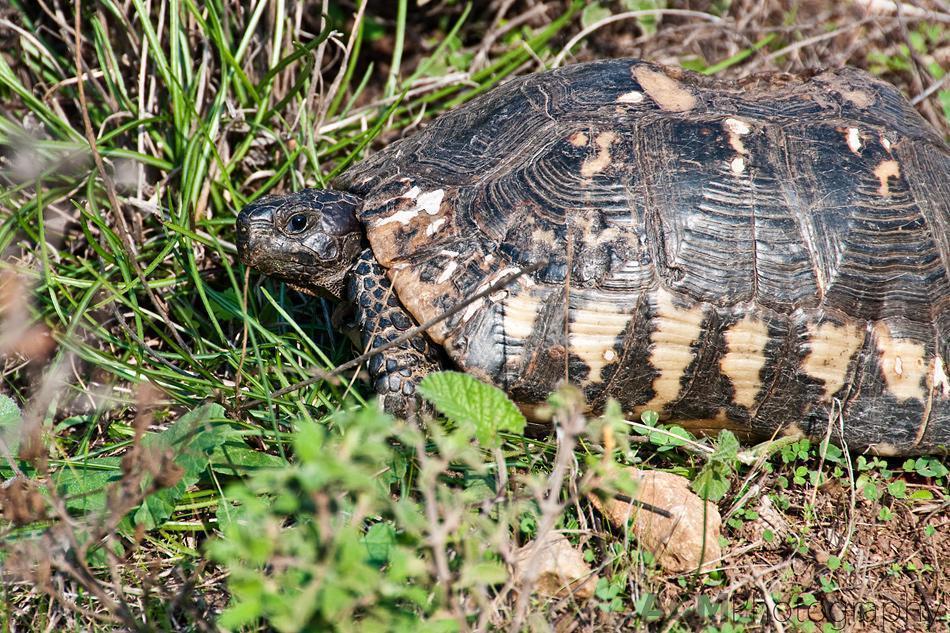 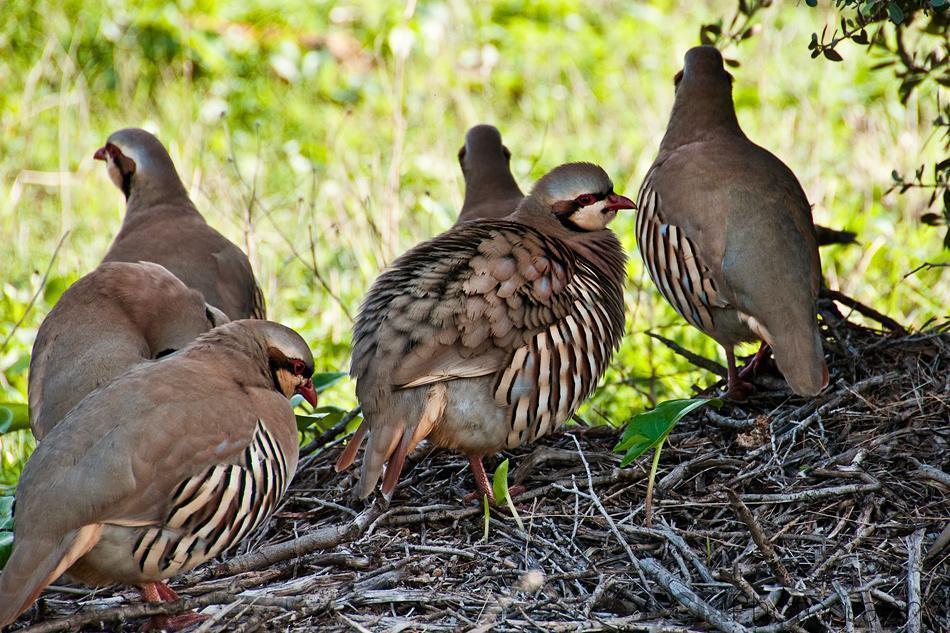 By the time we finished exploring the grounds and started heading back to the car, several busloads of tourists had arrived for lunch at the on-site restaurant. We decided not to stick  around but to head down the road 2 kilometres to a small taverna called Syrtaki, recommended in my trusty DK guidebook. 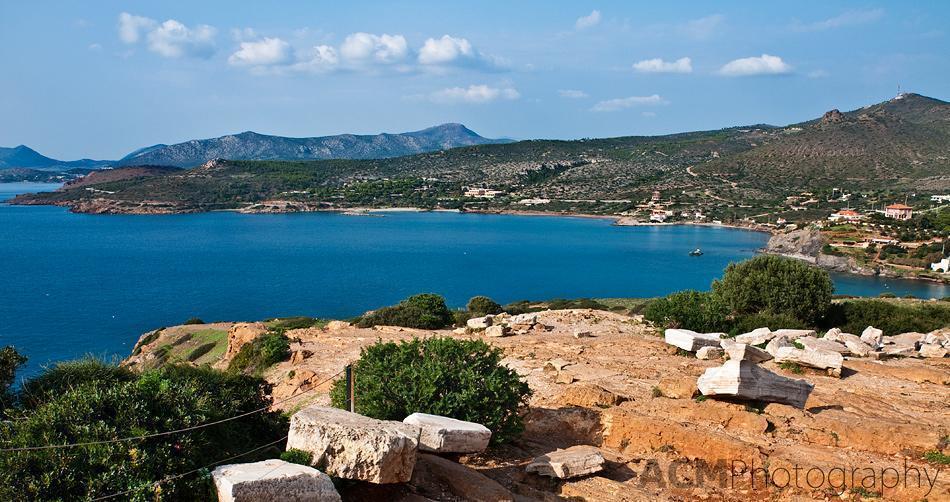 There was only one other couple (and a few cats) in the restaurant and there were no menus, a good sign in my books. The owner came over, slapped Andrew on the shoulder, something that happened a lot in Greece, and asked, “So friends, what can I get you? You like meat, fish…. BBQ?”

Having already eaten a lot of Greek seafood on our trip, we both opted for BBQ, having no idea what we were actually in for. We were brought a small carafe of delicious white wine and the ubiquitous but scrumptious Greek salad.

Our BBQ turned out to be what looked like two hamburgers each, without the buns and served with fries. They were filled with herbs and spices and grilled to perfection. The fries were light and crispy and, even after becoming Belgian Frite snobs, we enjoyed them.

After a long relaxing lunch, and a bit of kitty therapy, we hopped in our little rental car and wound our way back to the hotel. It was a perfect day trip from the hustle and bustle of Athens and one I definitely would recommend. 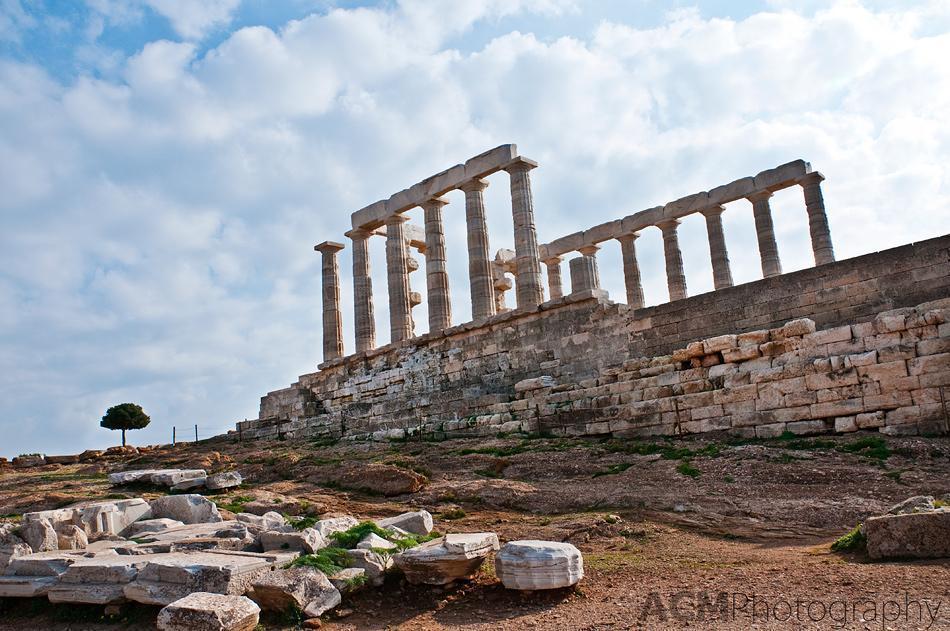 Rental car from Avance in Athens including hotel drop off: 52 euro

Tickets to the Poseidon Temple – 4 euro each

View Vouliagmeni to Sounion in a larger map