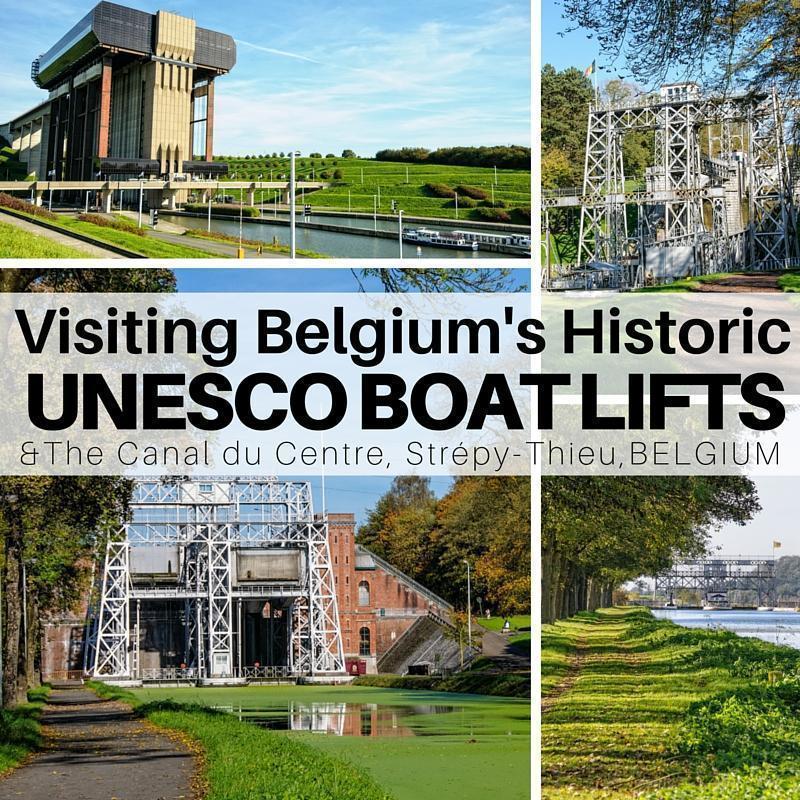 Belgium’s four historic boat lifts, on the canal du centre, revolutionised transport in the 19th century. In the 21st century, Strépy-Thieu, the world’s tallest lift, did it again.

I love collecting UNESCO World Heritage sites. One of my goals, for 2014, was visiting the last three Belgian sites on my list. (Those of you who read our newsletter will know how that challenge went…) When we learned we’d be leaving Belgium next spring, and losing access to our car immediately, I wasn’t sure my list would ever be complete.

As luck would have it, our car pickup was delayed and we were blessed with a sunny autumn day, a tank full of fuel, and a checklist to complete. We headed to the Belgian province of Hainaut, in Wallonia, to visit the four historic boat lifts on the Canal du Centre.

Our first stop was at Strépy-Thieu, the towering, modern lift that replaced the four small historic lifts. While Strépy-Thieu itself isn’t on the UNESCO list, it’s an impressive structure. It’s currently the tallest boat lift in the world (until China’s Three Gorges Dam ship lift is completed) and raises and lowers boats 73.15 metres (240.0 ft).

The Strépy-Thieu boat lift is an impressive structure on the Belgian skyline.

More relevant to our UNESCO related visit, is the museum inside the Strépy-Thieu lift and the short film for visitors. While it focuses on the modern lift’s construction, it also explains the history of the Canal du Centre and its importance as a shipping channel. It discusses the four historic lifts, their significance to the economy of the area, and why they were eventually replaced.

Inside the lift, visitors can view the machine room.

Visitors to Strépy-Thieu can also take the elevator to the observation deck, for a view of the surrounding landscape. Unfortunately, the windows were far too dirty for a clear photograph. Visiting during the off-season, we also weren’t able to see the lift in action. Boat tours take tourists through both the modern and historic lifts on the canal – something we definitely have added to our bucket list.

Up, up, and away! These huge basins lift boats to the upper level.

After our orientation at Strépy-Thieu, it was time to track down the UNESCO listed lifts. From Strépy-Thieu, the closest of the historic lifts is number 4, the Thieu lift. While we didn’t get up-close-and-personal with this lift, we did enjoy the peaceful canal-side path and scenery. This is one of our favourite things about European waterways. There is almost always a pretty walking path to enjoy alongside the canal.

The Thieu lift in the distance (above) with its pretty surroundings.

The next lift we visited was number 1, the Houdeng-Goegnies boat lift. Here we could not only enjoy the pathway, but admire the structure of the lift itself. Designed by a British civil engineer, Edwin Clark, the lifts are beautiful in their simplicity. There are two elevators with two tanks, called caissons, supported by an iron column. As one caisson rises, the other descends; their weight counterbalancing.

The Houdeng-Goegnies boat lift was the first of the four UNESCO listed lifts.

Finally, we made a quick visit to lift number 3, Strépy-Bracquegnies. The surrounding architecture, including the machine room, makes this lift the most attractive to visit. Unfortunately, parking was almost impossible, the day we visited, so we were only able to make a quick photo stop.

The Strépy-Bracquegnies lift is on a bend in the canal.

Some of the Strépy-Bracquegnies lift’s building remain in tack as well.

We decided not to stop at the final of the four lifts, as we had two more UNESCO sites to pack into our final day with wheels. (Stay tuned for more on Belgium’s UNESCO sites in upcoming posts.)

Belgium’s picturesque historic boat lifts are well worth a visit on a sunny day, when you can make the most of the canal-side pathways for walking or cycling. Combine it with a trip to modern Strépy-Thieu and even the nearby Ronquières Inclined Plane for a boat-filled day in Belgium.

Guided tours of the historic lifts are available from the Strépy-Thieu lift from spring until fall.

Have you visited any of Belgium’s boat lifts, modern or historic? Tell us about it in the comments below.

Alison Cornford-Matheson
Alison Cornford-Matheson is a Canadian travel writer, author, and photographer. She is the founder of Cheeseweb.eu, a website dedicated to slow and sustainable travel, off-the-beaten-path destinations, and cultural awareness through travel. She and her husband, Andrew, are the founders of RockFort Media, committed to helping entrepreneurs tell their stories online. Alison has visited over 45 countries and, after living in Belgium for 11 years, now lives full-time in a Bigfoot motorhome named Yeti with Andrew and their well-travelled cat.
Latest posts by Alison Cornford-Matheson (see all)
Pin42
Share346
Tweet14
Flip
Email