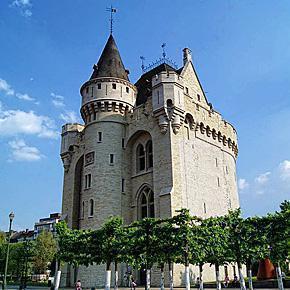 The Porte de Hal Museum tells the story of Medieval Brussels inside a stunning piece of Belgium’s architectural history.

I’ve passed by the pretty little tower at Porte de Hal hundreds of times. Each time, I look up, think I really must go inside and explore the museum some day, and then I continue on my way. Since the Porte de Hal Museum’s re-opening in June of 2008, I still hadn’t set foot inside. Now, I’m happy to say I’ve finally rectified that gap in my Brussels attraction knowledge.

The Porte de Hal (or Hallepoort in Flemish) may look like there should be a long haired princess trapped in the attic, (There isn’t. I checked.) but its function was much more important. Built in 1381, the Porte de Hal was one of the seven main entrances through the Brussels city wall. It was named Porte de Hal, as it faces the direction people would travel to and from the city of Hal (the door to Halle).

Originally, the Porte de Hal had a large wooden drawbridge over a moat and was virtually impenetrable with this bridge raised.  You can still see where it would slot into the archway when the gate was closed.

Back in those early days, the Porte de Hal didn’t have its current fairy-tale appearance. In fact, it wasn’t until the 19th century, when architect Henri Beyaert restored the tower, that it was embellished with Neo Gothic decorations. Beyaert added one of the Porte de Hal’s most striking features: a small round tower, topped with a conical roof, which houses a stunning stone spiral staircase.

Before its restoration by Beyaert, the Porte de Hal served a variety of functions, other than that of city gate. It actually survived the demolition fate of the other six city gates, because it was being used as a prison at the time. Throughout the ages it was also a customs house, a Lutheran church and even a grain silo.

In 1847, the Porte de Hal was taken over by the Royal Museums for Art and History but was too small to house most of the collection, which was relocated to Parc Cinquantenaire. The Porte de Hal was closed in 1976 as it was too run down and dangerous to continue admitting the public. Restoration began in 1991 but fizzled out due to lack of funds, until finally in 2007, extensive renovations restored the Porte de Hal to its beautiful state today.

The attic of the Porte de Hal is now an exhibition space (no princesses to be found).

Since its reopening in 2008, the Porte de Hal (or Halle Gate) museum has been telling visitors the story of Medieval Brussels. There is a strong focus on the city’s defence, with collections of weapons, armour (pieces of which you can actually try on) and exhibits on the former city walls.

The Porte de Hal Museum includes artifacts from the social history side of Brussels as well. One room is dedicated to the various trade guilds, which were vital to Brussels’ survival during the medieval period. There is also a painting, by Anthonis Sallaert, showing Infanta Isabelle taking part in a crossbow guild celebration in Sablon. This is a famous moment in the history of the guild and ties in well with a trip to the Crossbow Guild Museum.

Another highlight of the museum’s collection is a cradle said to have been used by Charles V. But by far the most interesting (and somewhat disturbing) artifacts in the museum are the horses ridden by Archduke Albert and his wife, Infanta Isabelle. Let’s just say taxidermy hadn’t come into its own at the period these poor horses were stuffed. They look rather ghoulish but are prized possessions of the museum nonetheless.

One of the other highlights of the Porte de Hal Museum, is the view over the St. Gilles neighbourhood from the roof.

St. Gilles from the roof of the Porte de Hal

The museum tells a fascinating story of Medieval Brussels and is well worth a visit. It’s a bite sized attraction that is easy to visit in a couple of hours, is interactive enough to entertain the children and informative enough to appeal to adults. I’m only sorry I waited so long to visit!

Alison Cornford-Matheson
Alison Cornford-Matheson is a Canadian travel writer, author, and photographer. She is the founder of Cheeseweb.eu, a website dedicated to slow and sustainable travel, off-the-beaten-path destinations, and cultural awareness through travel. She and her husband, Andrew, are the founders of RockFort Media, committed to helping entrepreneurs tell their stories online. Alison has visited over 45 countries and, after living in Belgium for 11 years, now lives full-time in a Bigfoot motorhome named Yeti with Andrew and their well-travelled cat.
Latest posts by Alison Cornford-Matheson (see all)
Pin51
Share13
Tweet15
Flip
Email